Bill was indeed back in the saddle, much missed, but being Head of Department means meetings! He was called to Toddington today to attend a planning meeting about Broadway station, hence another post from yours truly.
Work on the signal box continued in several areas, so a good day's progress can be reported. Graham spent the whole day painting in the soffit area, with several coats required and indeed mostly already applied. After the knotting fluid is painted on there is a coat of primer, followed by an undercoat, another undercoat and then a final coat of gloss. At the end of the day the fascia board was in gloss, while the woodwork below it was in the second undercoat. We had to keep the work site neat and, above all, dust free! In several areas the GWR two shades of stone could be clearly seen, even if some of it was still technically an undercoat. 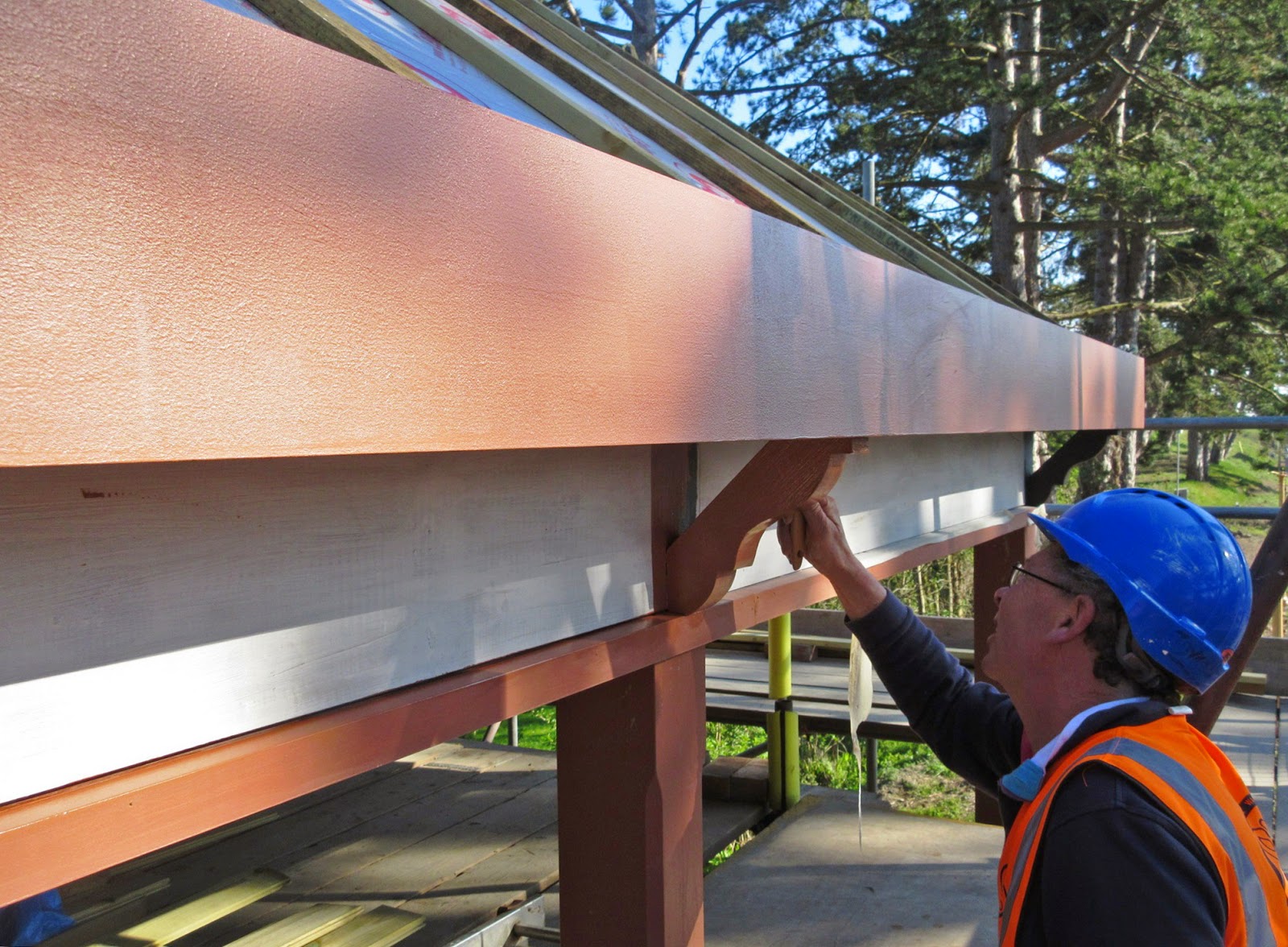 Round the back Pete and JC were putting up the remaining decorative brackets, which JC has made. Don't they look good?
Pete was in a jovial mood as you can see. These are the last brackets, and up above Tony and John S completed the second half of the T & G boarding on the rear face of the roof, including the insulation sheets. This is now all completed. 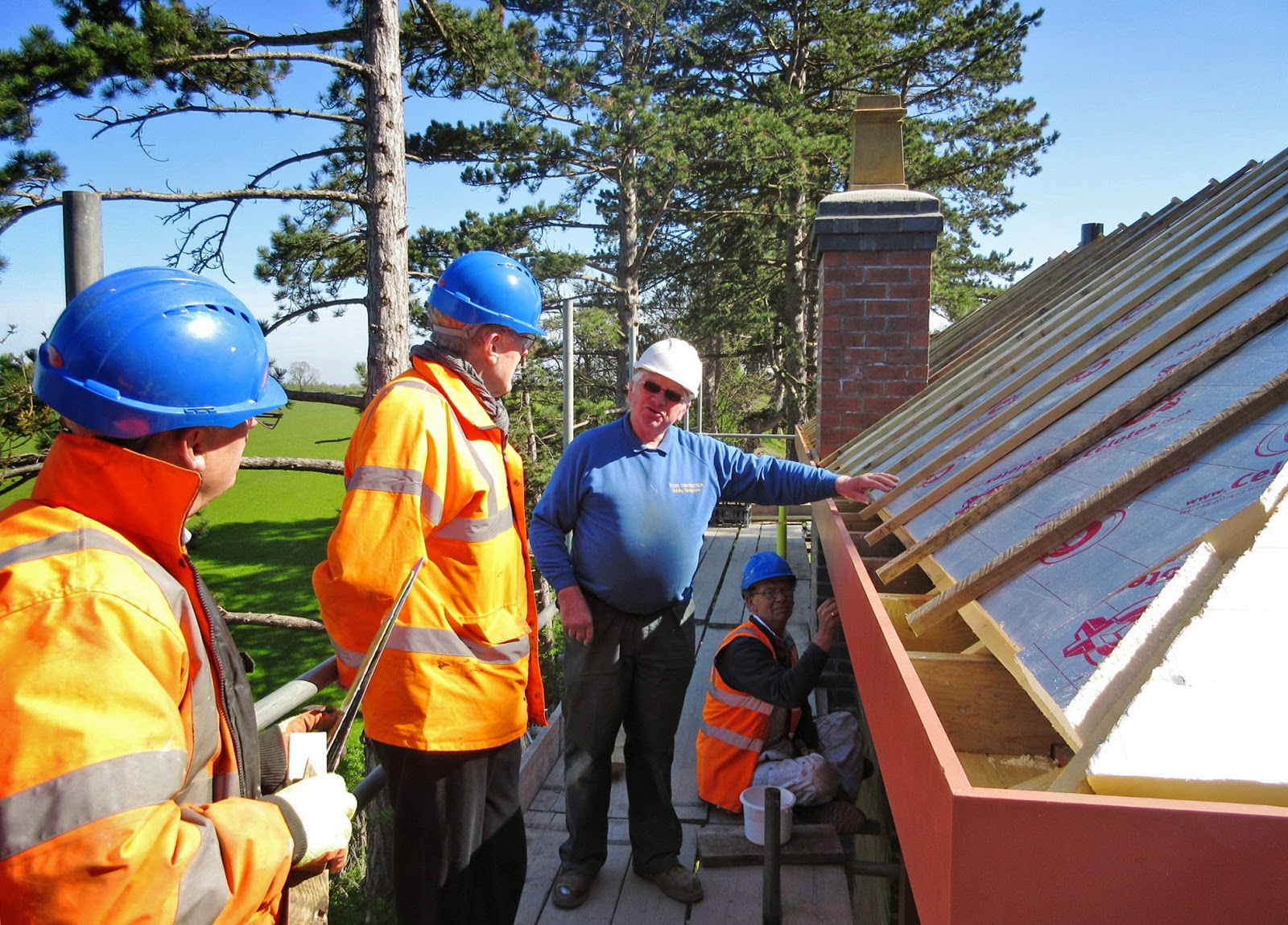 Bill came up to see the progress on the roof for himself, and JC was proud to explain how the slates will sit when they go on in perhaps a week's time. Down below, Graham is already painting the brackets, fixed only moments ago. Still to go is the flashing around the chimney, the roofing felt and the battens for the slates. That should result in a near watertight roof then. 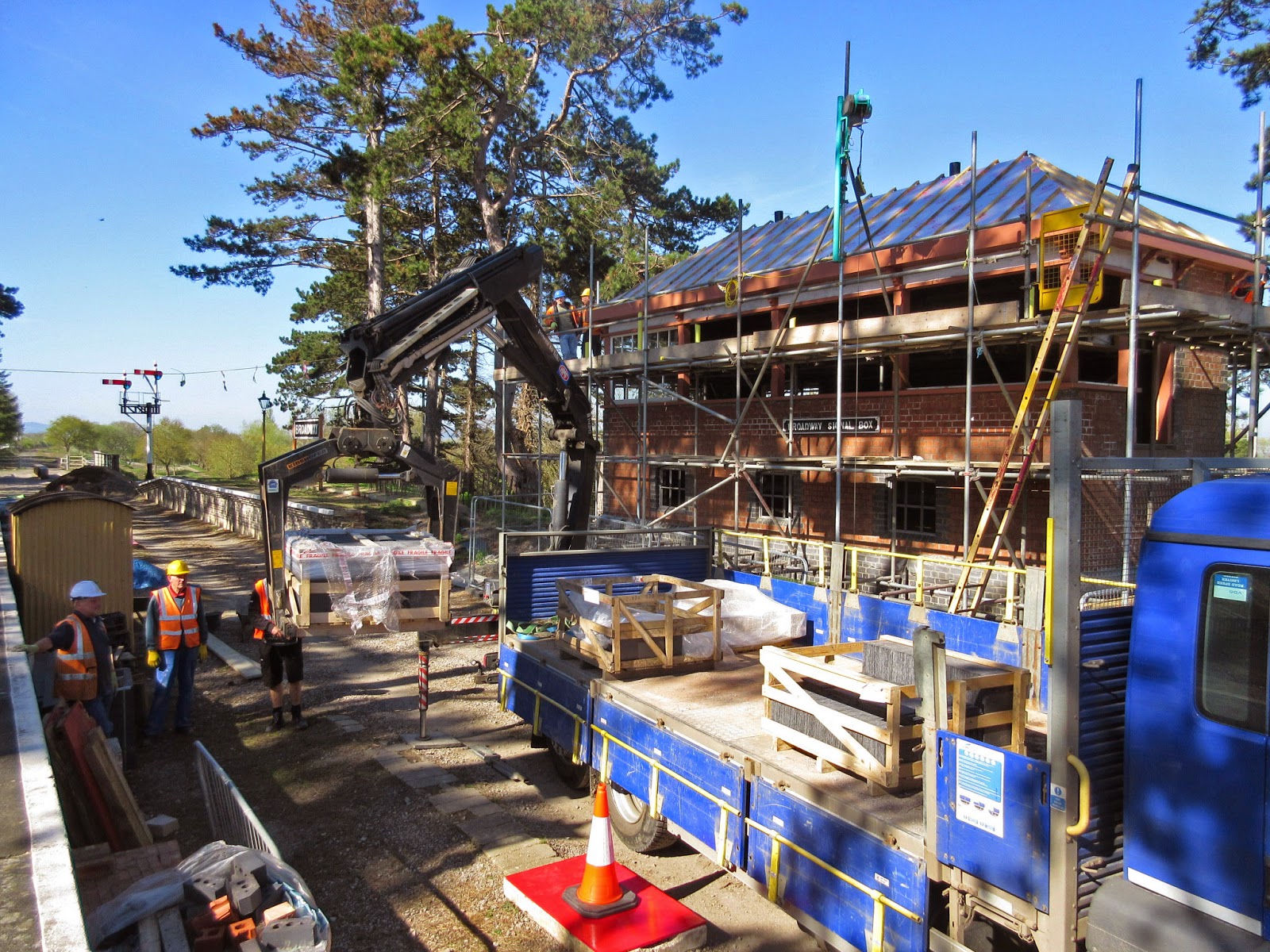 Later in the morning Jewson's delivered the actual slates themselves. There were three crates, with something over 1200 slates ready to go. We inspected a few, and the colour and form looked beautiful. We just need to let Graham finish his painting in a dust free atmosphere, and then we can get to work.

Working within the footprint of the old station building, a second gang continued today with the removal of the last reds still embedded in the foundations. 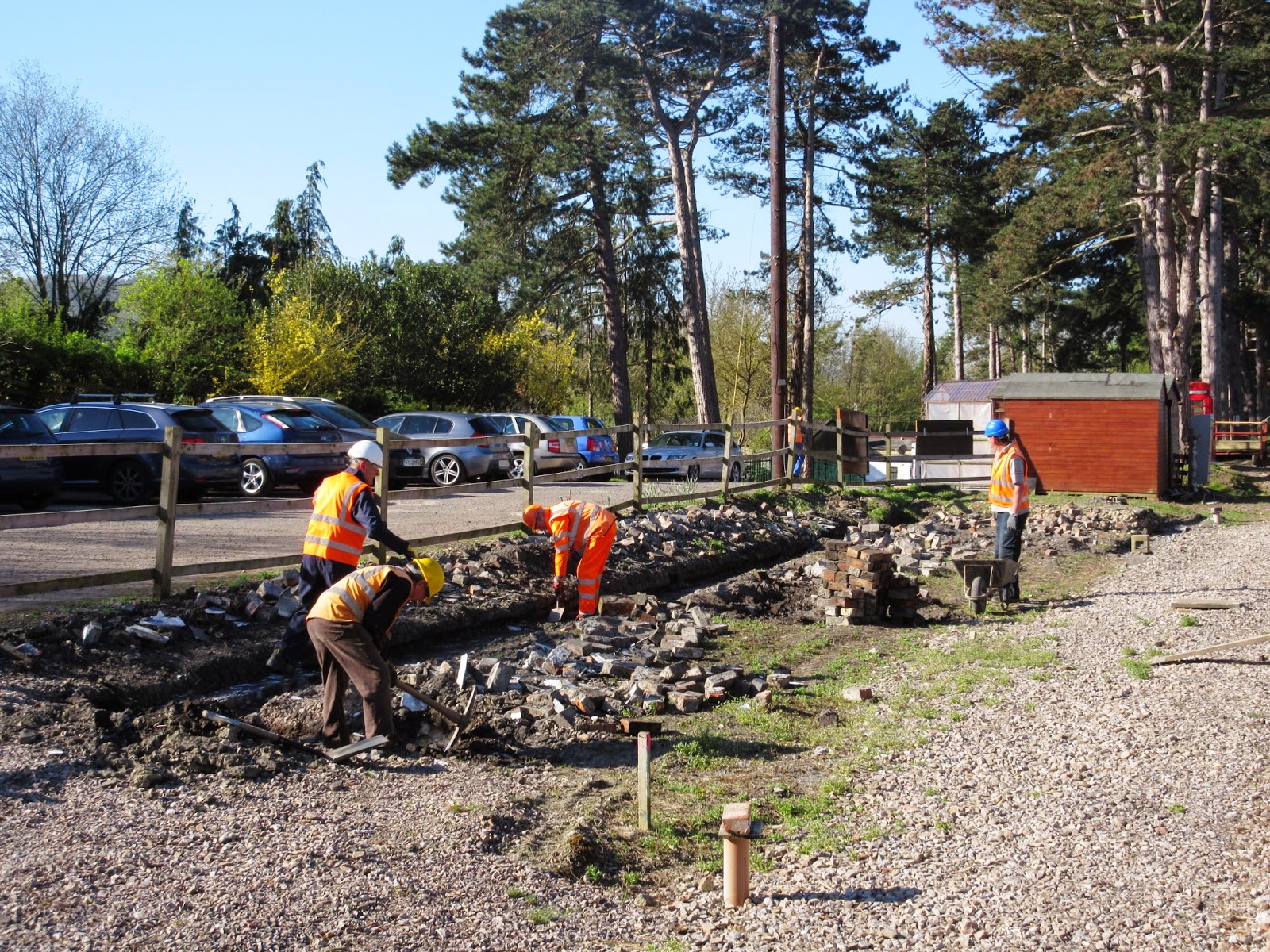 The reds were barrowed away and stacked by the brick cleaning stand, ready for Robin to attack on Saturday. Yessss ! But some interesting finds were also made. Who would have thought that anything of interest could still be found in the bottom of the old foundations, after the bulldozers had swept over them in 1963, and the site razed. Particular interest was paid to the site of former fireplaces (there would have been at least three, as that was the number of chimneys the old station had) and eventually something did turn up. First of all an old metal teapot lid (not wildly exciting) but then remains of the old fireplace surround, which were identical to those at Toddington. As you can see, it was made of slate and was sculpted. On the reverse of the pieces we found was a number - G368 - so can any reader tell us what this referred to? Which slate mine might have been the supplier? 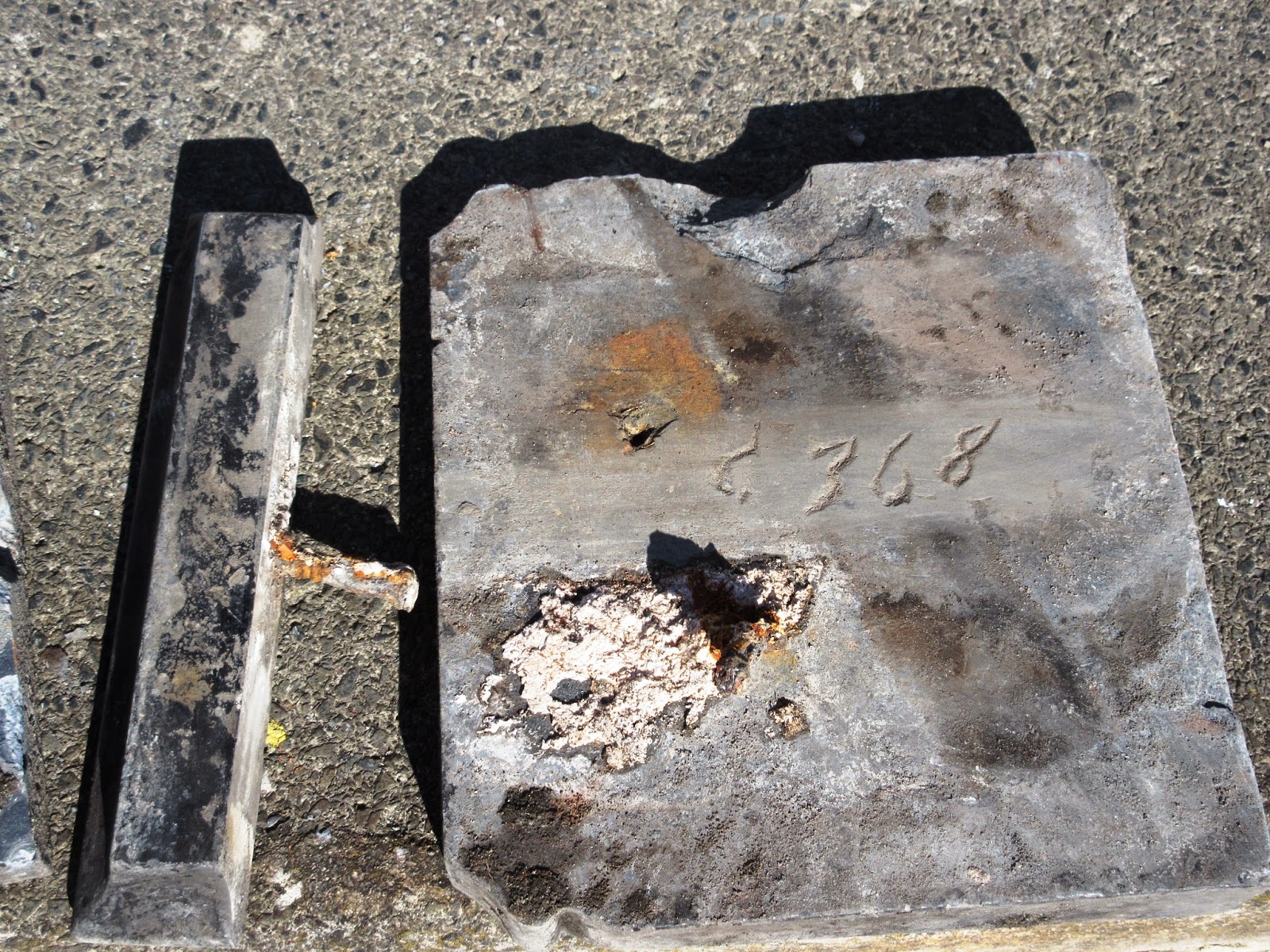 A second curiosity that was dug up is shown in the 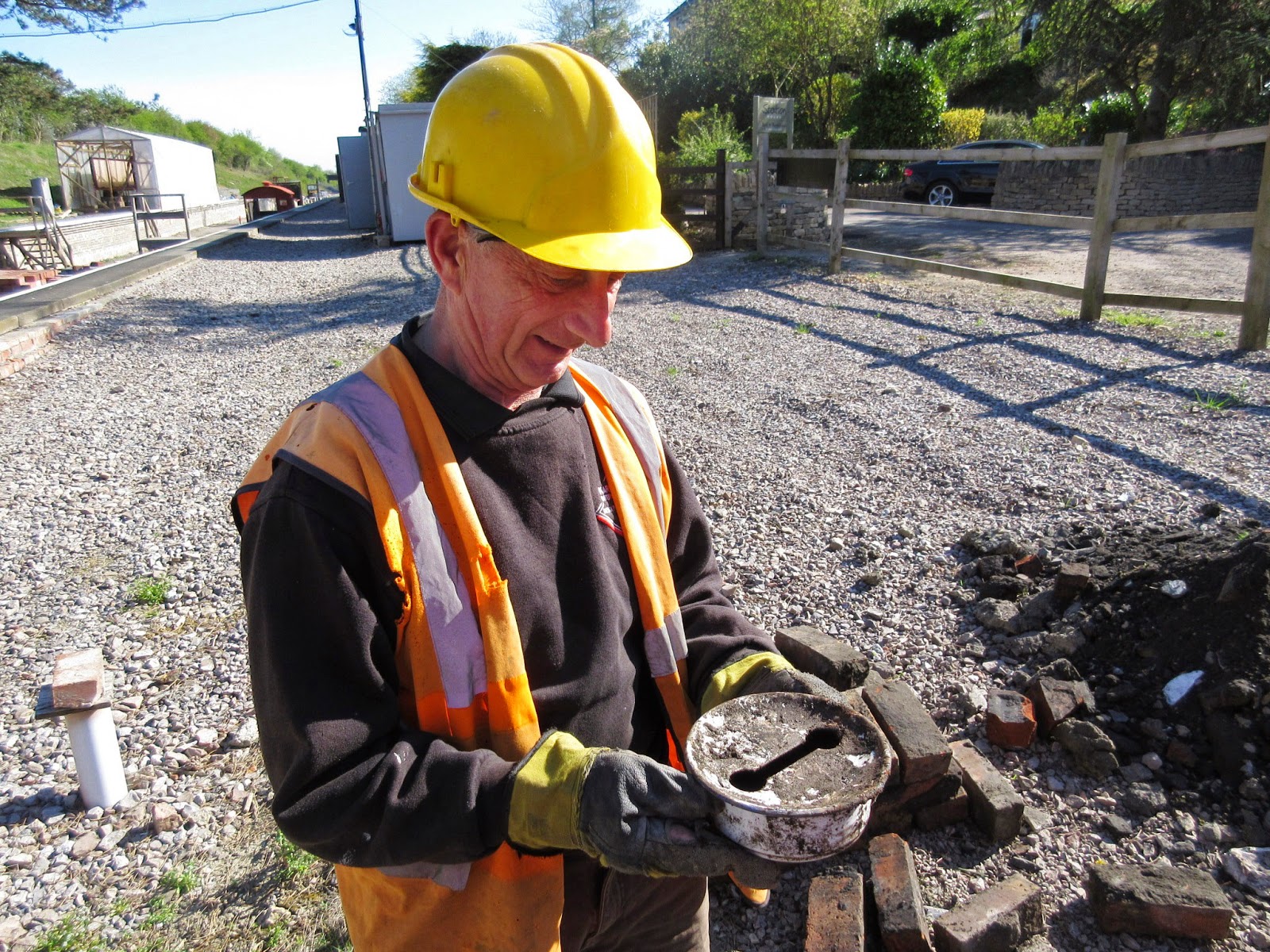 picture on the right. It was found in the remains of the northernmost fireplace. 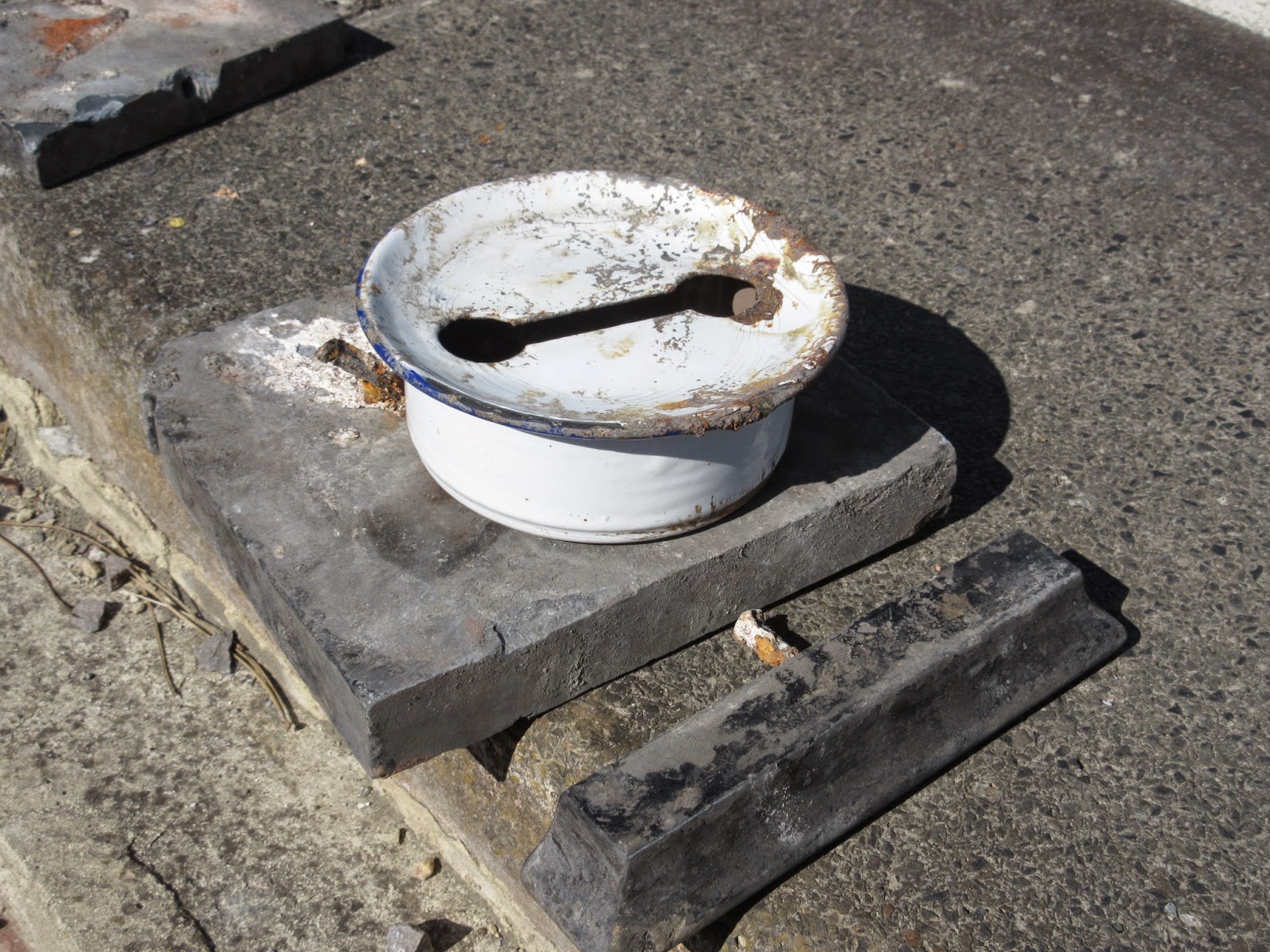 A close up is shown in the accompanying photograph on the right. It looks a bit like a half sized chamberpot, with a lid with the holes you can see. What on earth was it for? Can any reader identify it? The pot is made of enamelled steel, is white with a blue band around the rim, and has no markings on it. 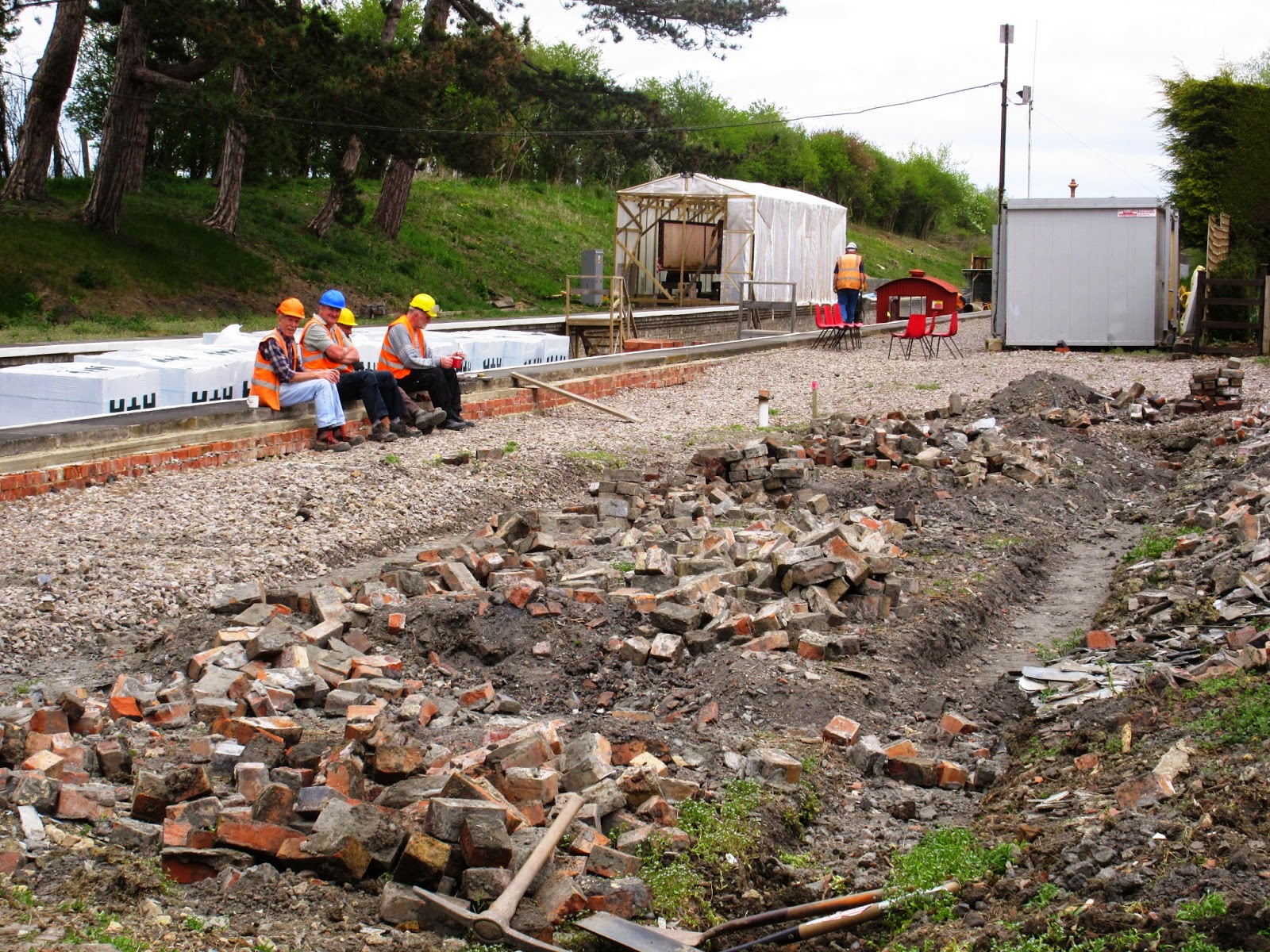 At the end of the day the 'archaeologists' looked pretty tired. Their site was in the full sun, and it became hot today. There comes a point when you have to sit back, look over your work, and have a cup of tea.

Up at the northern end of the site, Terry and Rod have been busy cleaning out a sizeable French drain, probably installed during the 'blanketting' sessions here in the late 1950s to improve the drainage in this clay cutting. Today, these drains are heavily overgrown, and Rod and Terry set out to clean one out. It proved to be rather bigger than they expected, being up to 6ft wide. In the picture on the right you can see the good job they made of it, and Martin here has started on the next drain along, extracting the pile of brushwood you can see in the foreground. 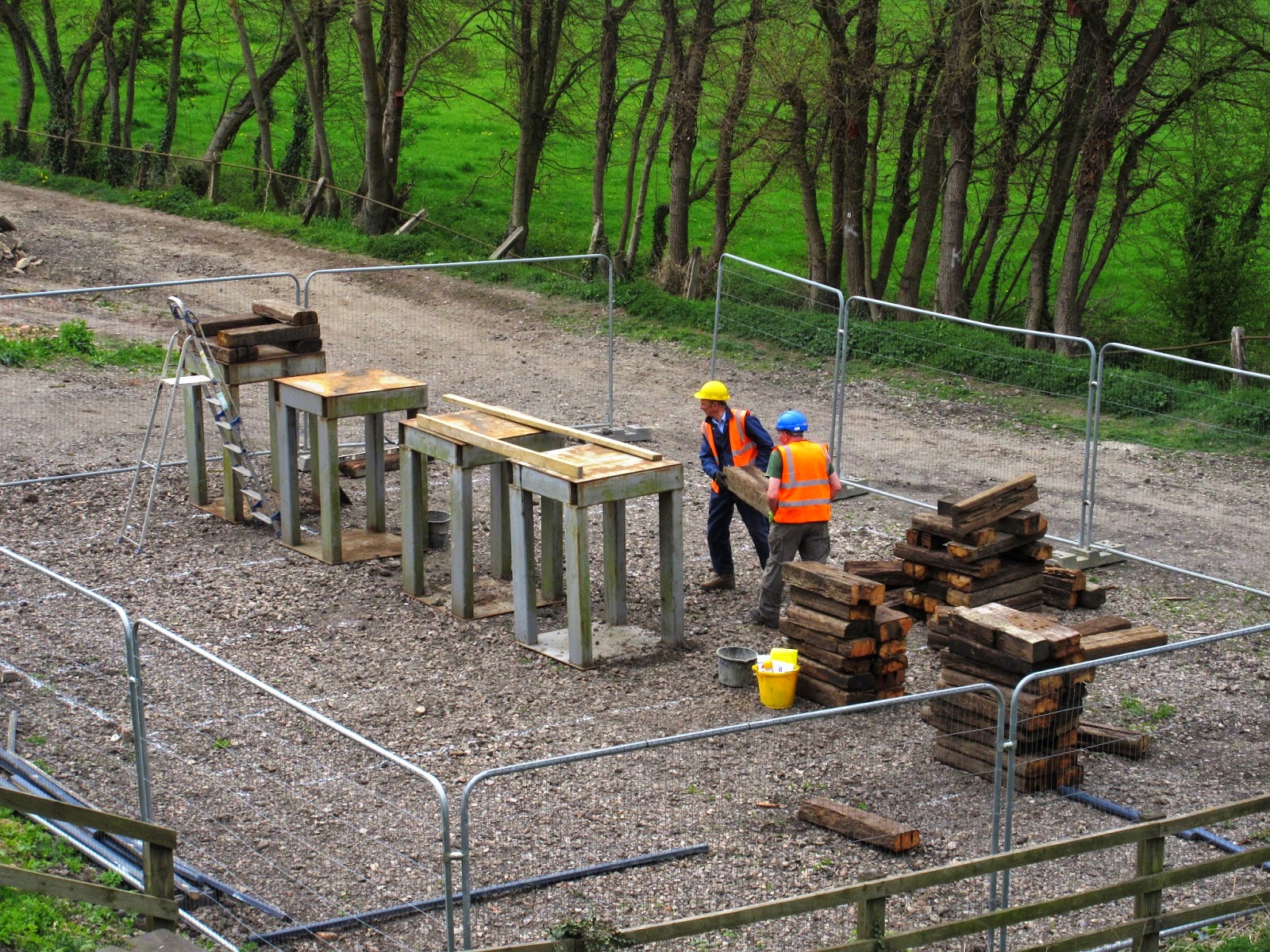 At the other end of the site, in the 'car park' field, Jim and Roger spent the day setting out the steel supports and half sleepers for the footbridge steps. Eventually this will be the compound where the steps are cleaned and repaired. 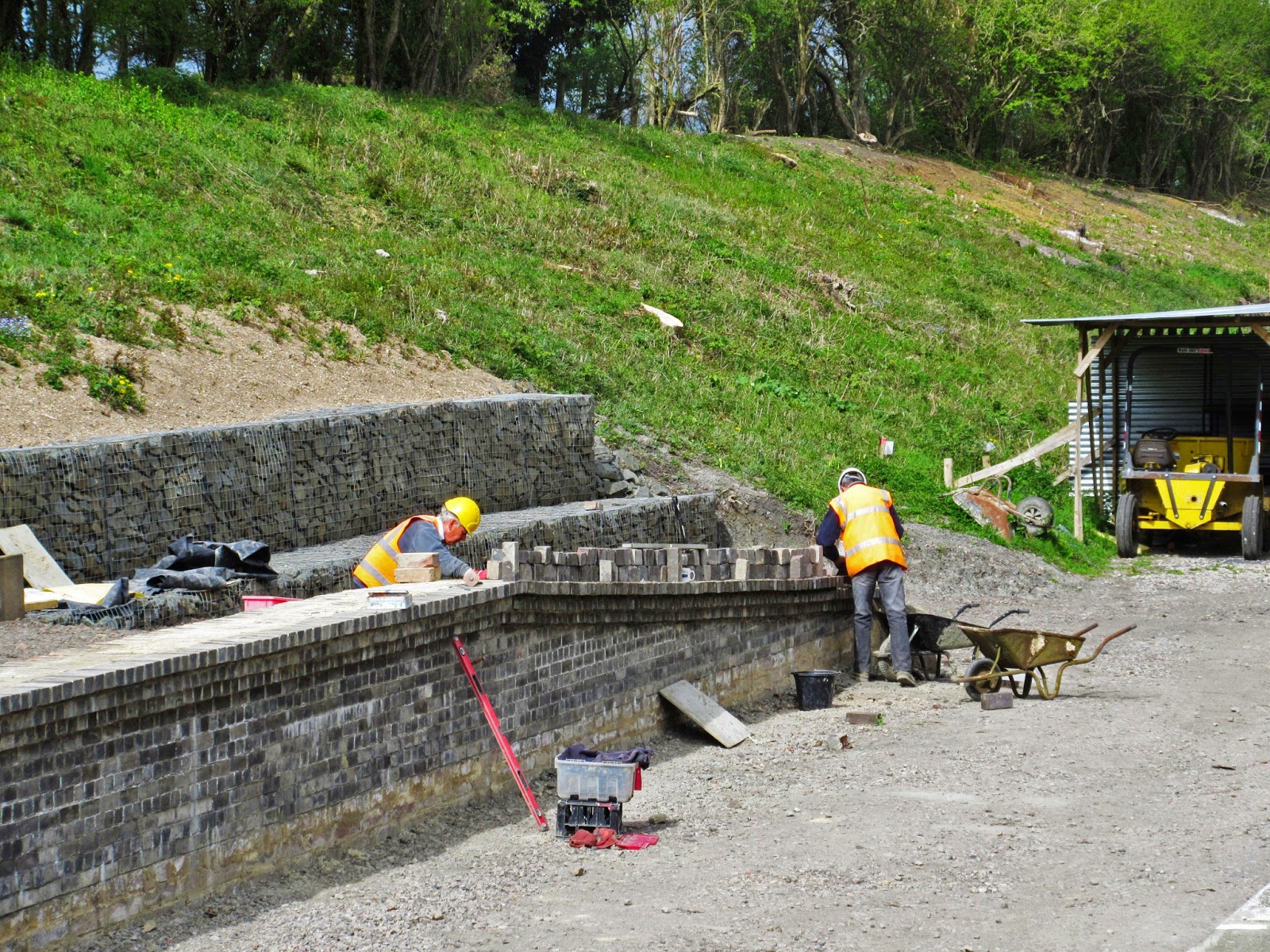 Work on the final piece of platform wall on 2c continues, but we are almost there! Here you can see Roger on the very last row of corbelling, working his way downhill to the very end. Peter H is behind the wall backing up, and making up the mixes for them both. The trusty wheelbarrow with the fist sized holes is back in service once again, you can't keep a good barrow down.

Next we should be slabbing along here. Currently our stock of slabs is almost exhausted, but we are on the trail of a potential supply which, after a recent site inspection in outer London, is looking promising. GWR of course !
Posted by Jo at 18:31

Excellent work chaps! Before the slates go on will any rain that falls collect in the box section eaves below ?

That enamel pot you found may have been used for keeping something hot being placed on top in a container.