You'll be aware that I've been hors de combat for a couple of weeks. Much improved, I got back in the saddle (albeit side saddle!) and did a few hours this morning. It was a joy to be back among the volunteers,  to enjoy the sunshine, and most importantly see all of the great progress that's been made over recent weeks.

A big thank you  to Jo for his blog reports while I was away - they were excellent!

A quick canter  through today's activities:- 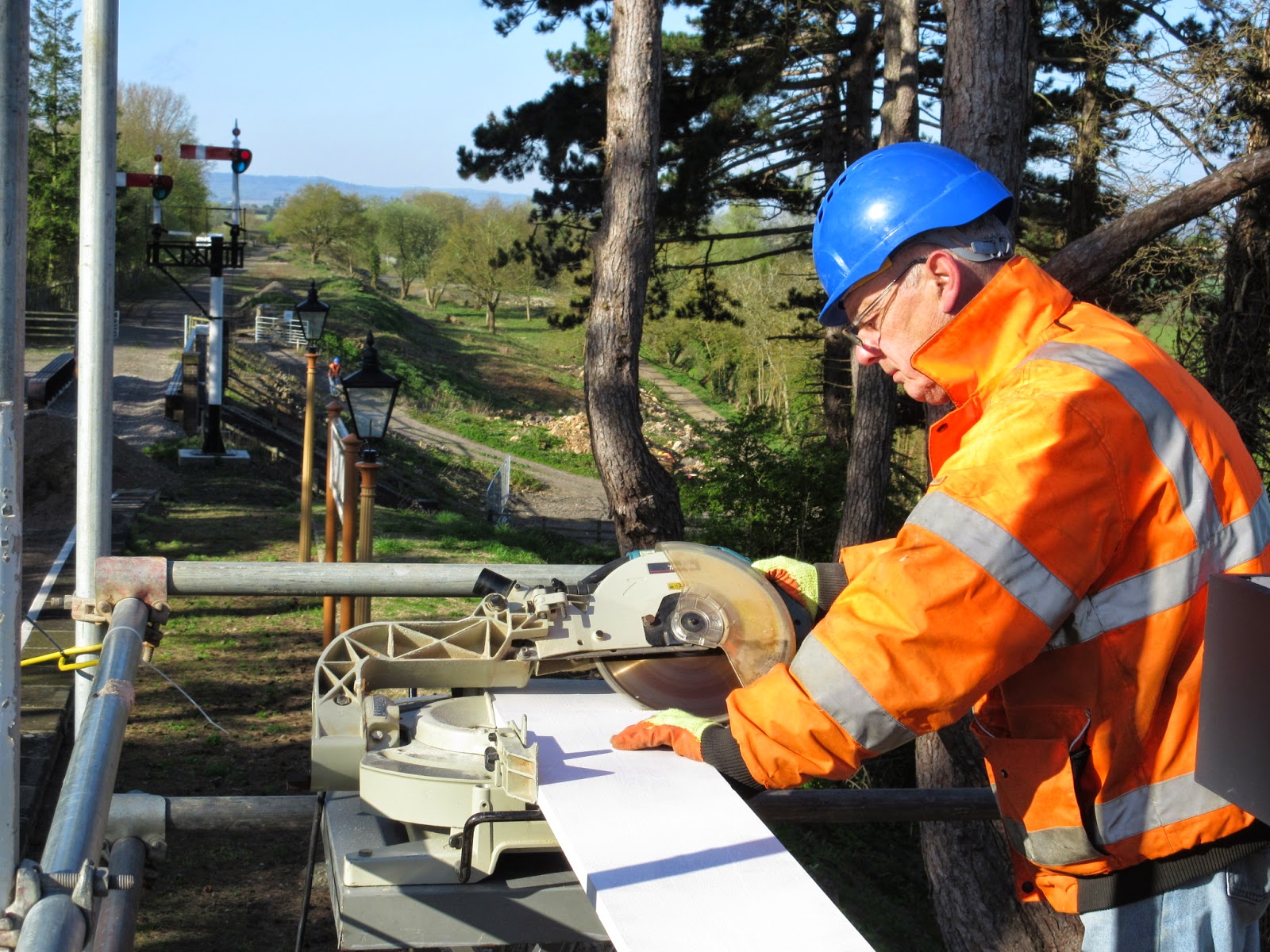 John S and Tony continued to make good progress on the Signal Box.The last fascia board on the north side was fitted, the remainder rubbed down, and all given a coat of primer. Graham Dykes is coming on Wednesday to put on a topcoat. Thank you Graham! 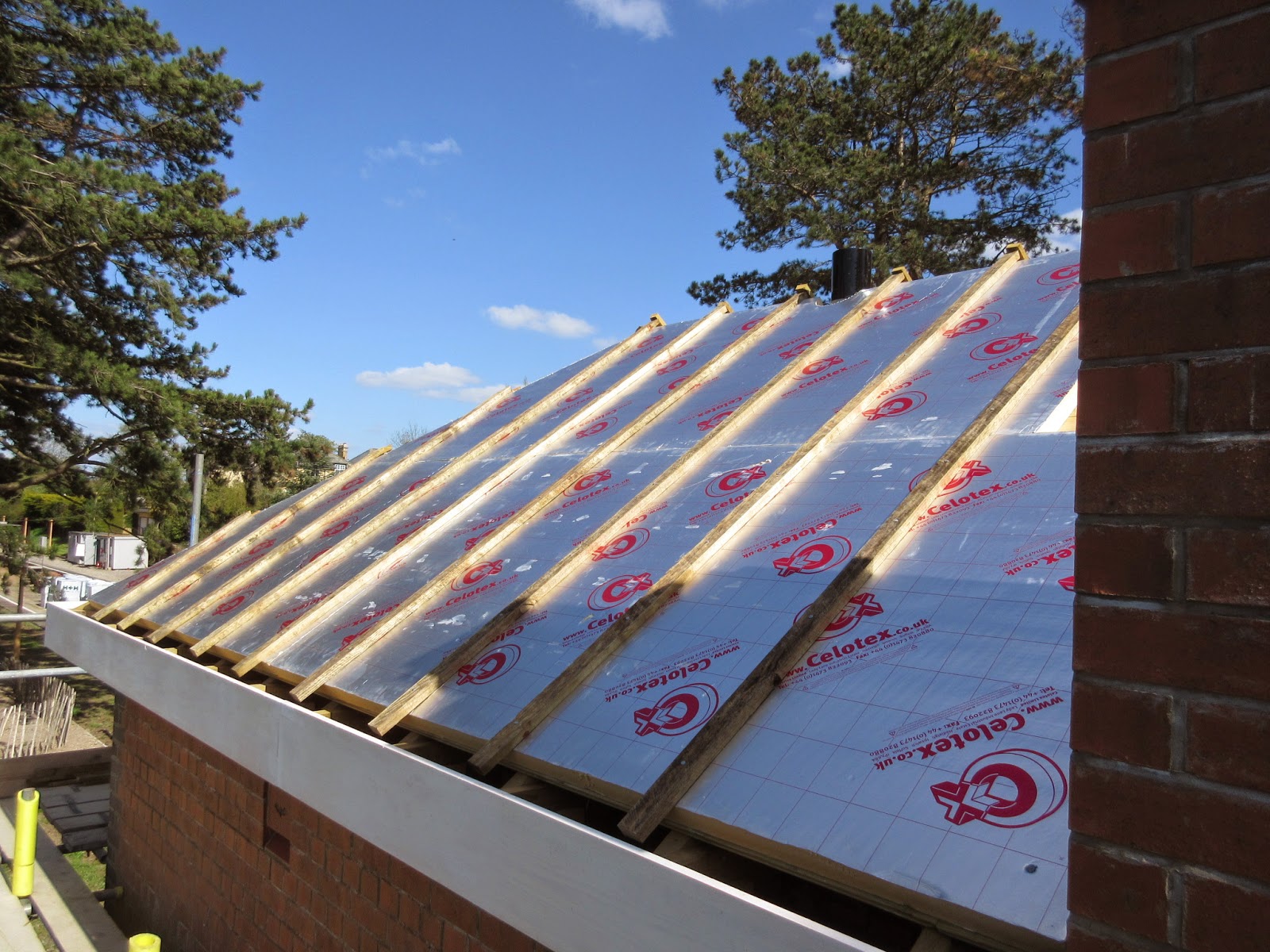 On the roof at the rear the final row of  T&G was fitted. In addition, insulation sheets where laid over approx half of the roof. 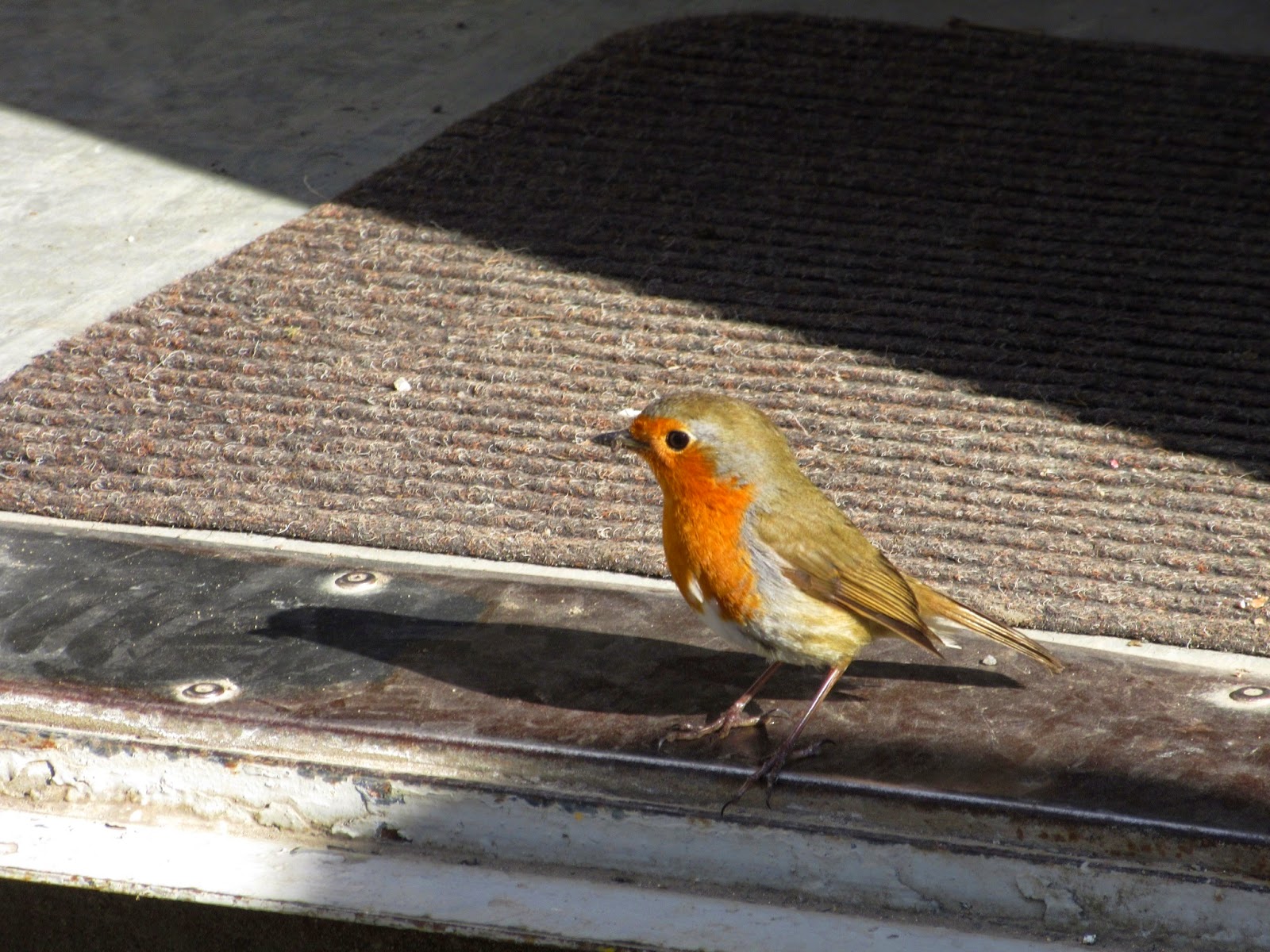 The Robin flew in and out of the cabin, even as the troops  were sitting in there. Cheeky chappie. He liked our biscuit crumbs... 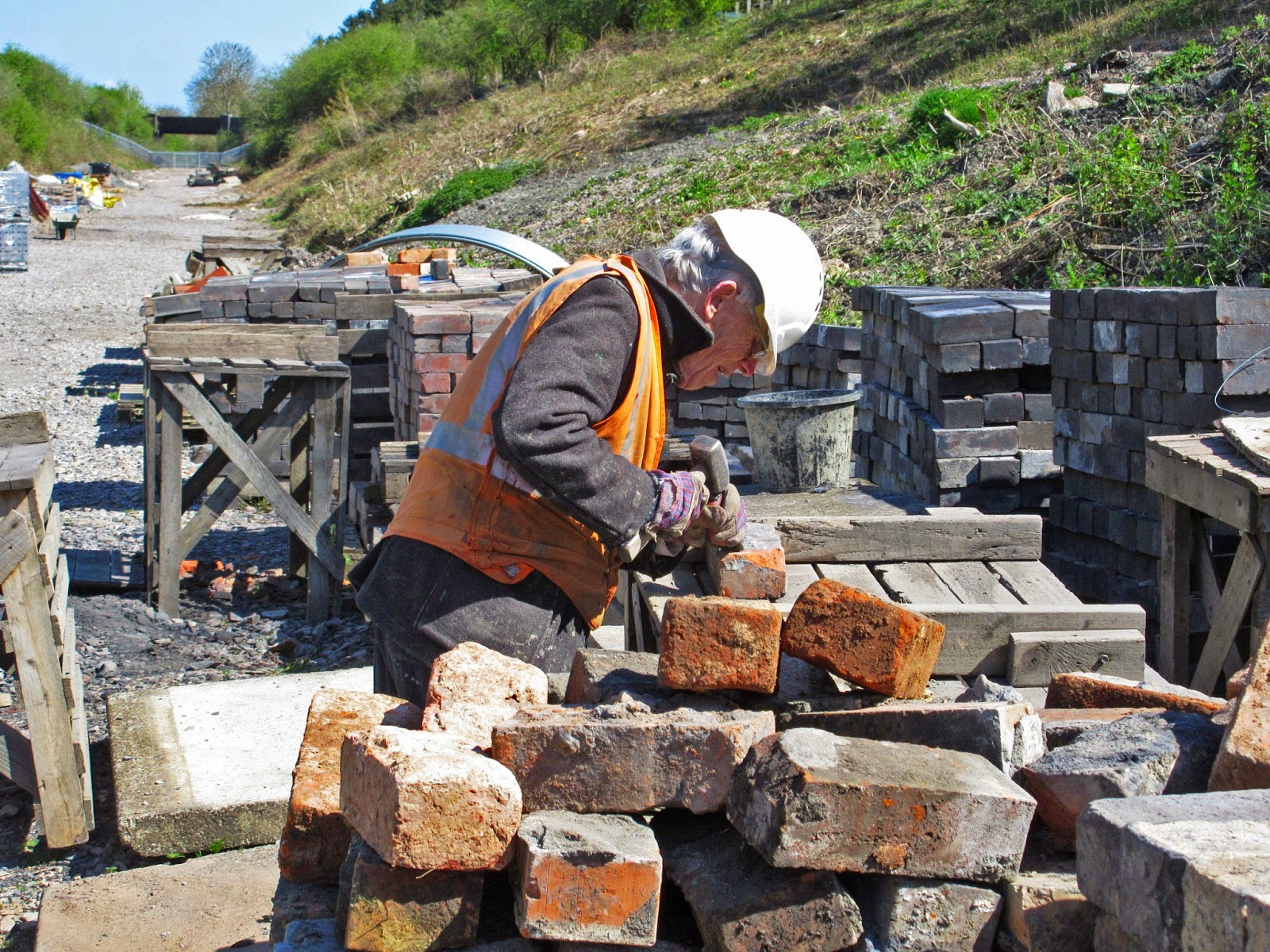 Talking of another cheeky chappie our brick cleaning master Robin, was quite pleased (I think!) to have a pile of 400+ bricks to have a go at. 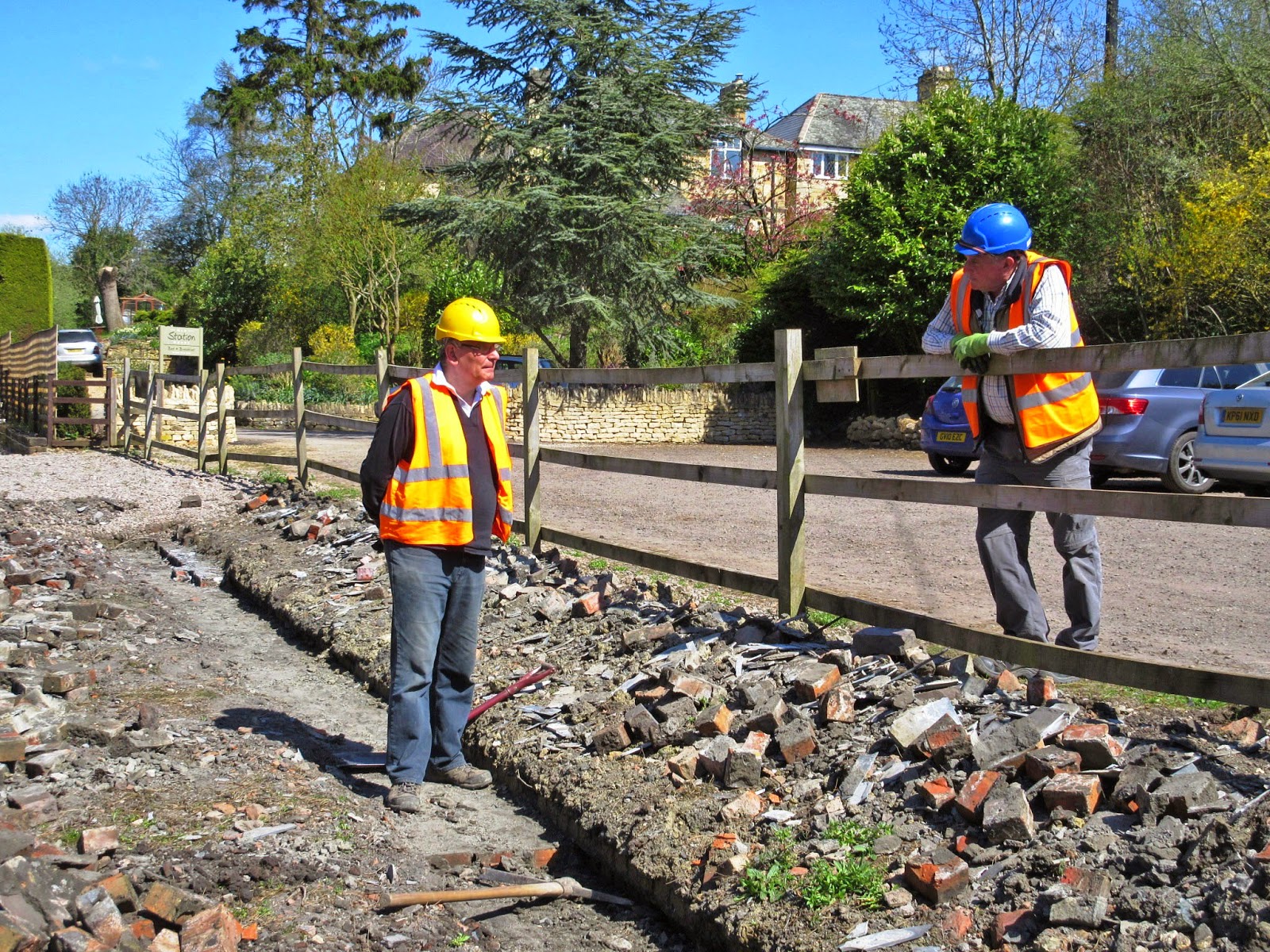 In addition the clearance of the old station foot print has revealed another 400+  bricks, all worthy of cleaning. Here Jim H has a chinwag with Keith G, who, together with Vic and Steve spent a very productive time extracting the brick treasure. 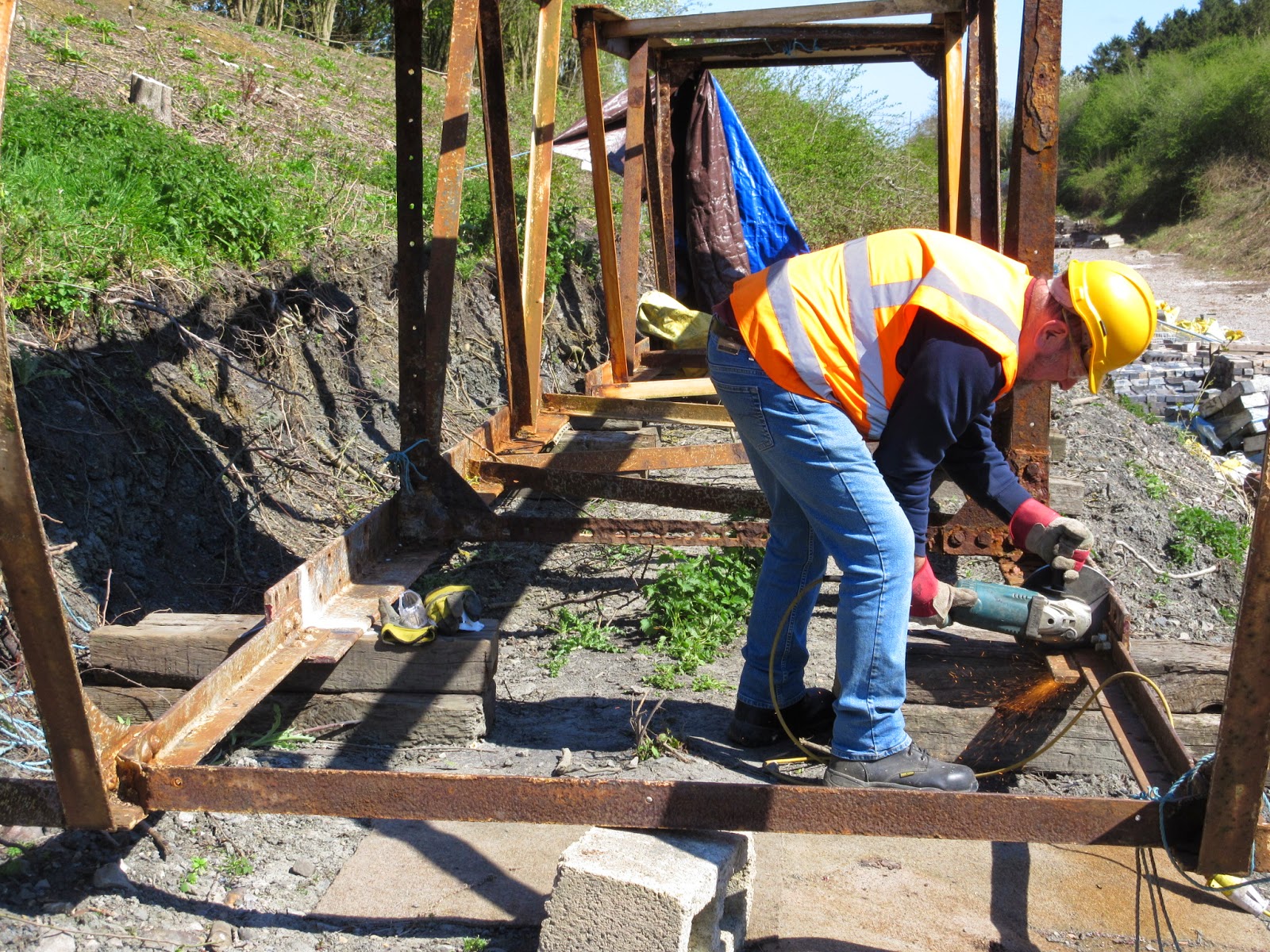 Work has started in earnest  to refurbish the footbridge components, Here Peter K is cutting off the roof hoops from the old towers, which will  then be  used on the new towers. Getting the old rivets and bolts out is proving quite a task, and its a case of perseverance. 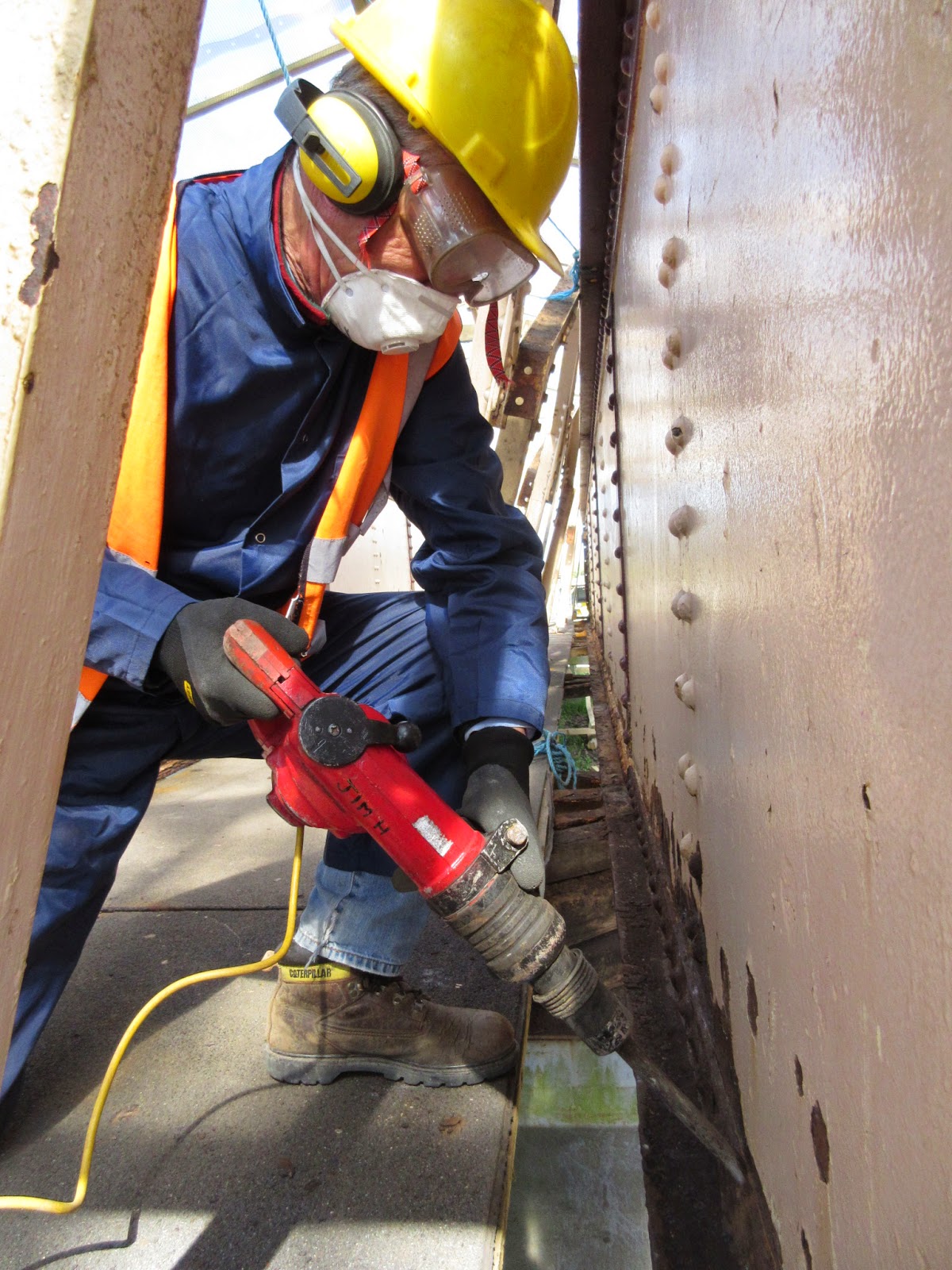 Similarly stripping  out the tired metal is no small task either. Here Roger is using the Hilti to make the job that bit easier. There's a long way to go however! 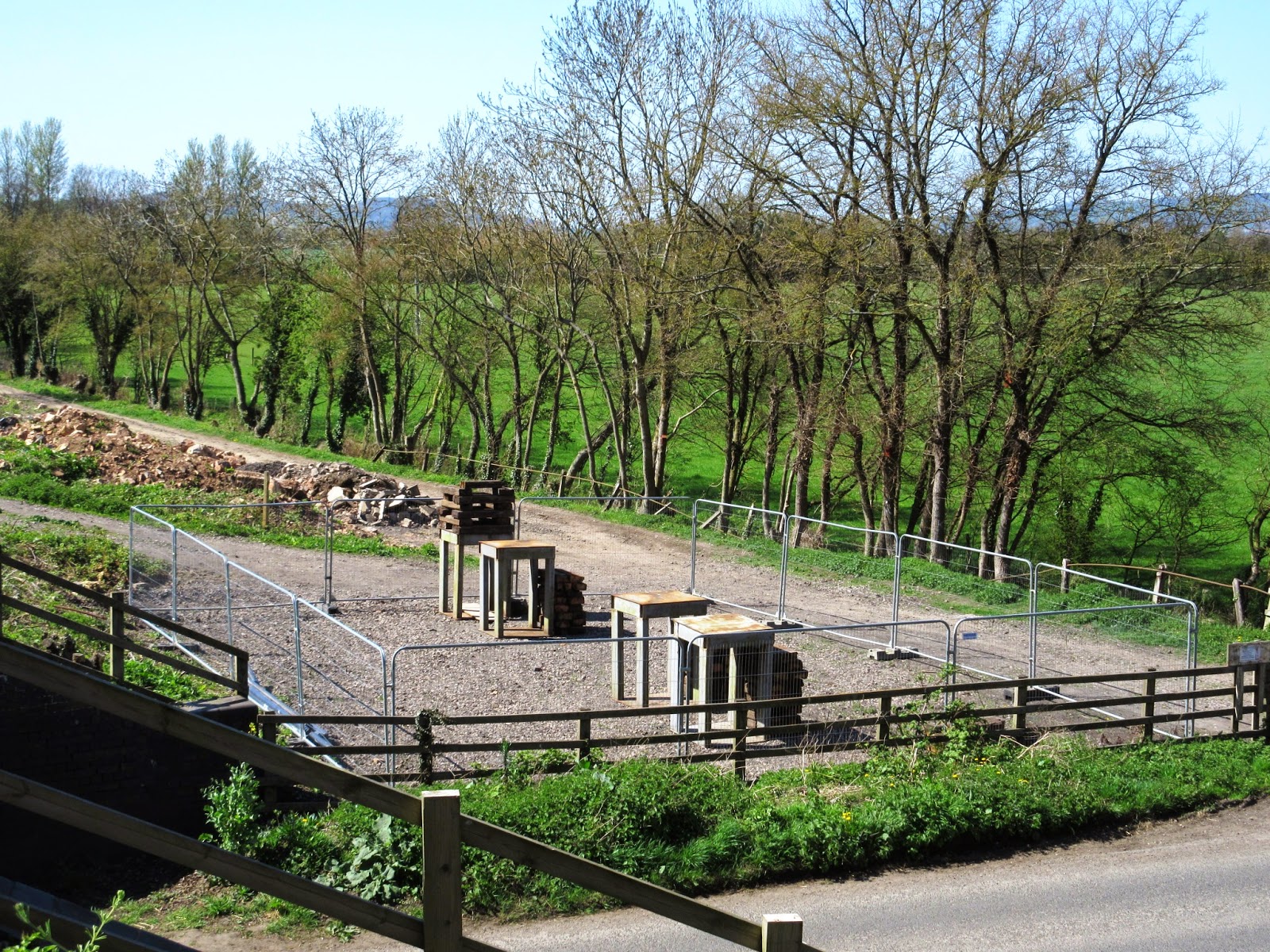 The car park area has now been surrounded with Heras security fencing in anticipation of of the stairs being delivered. Neat job Jim! 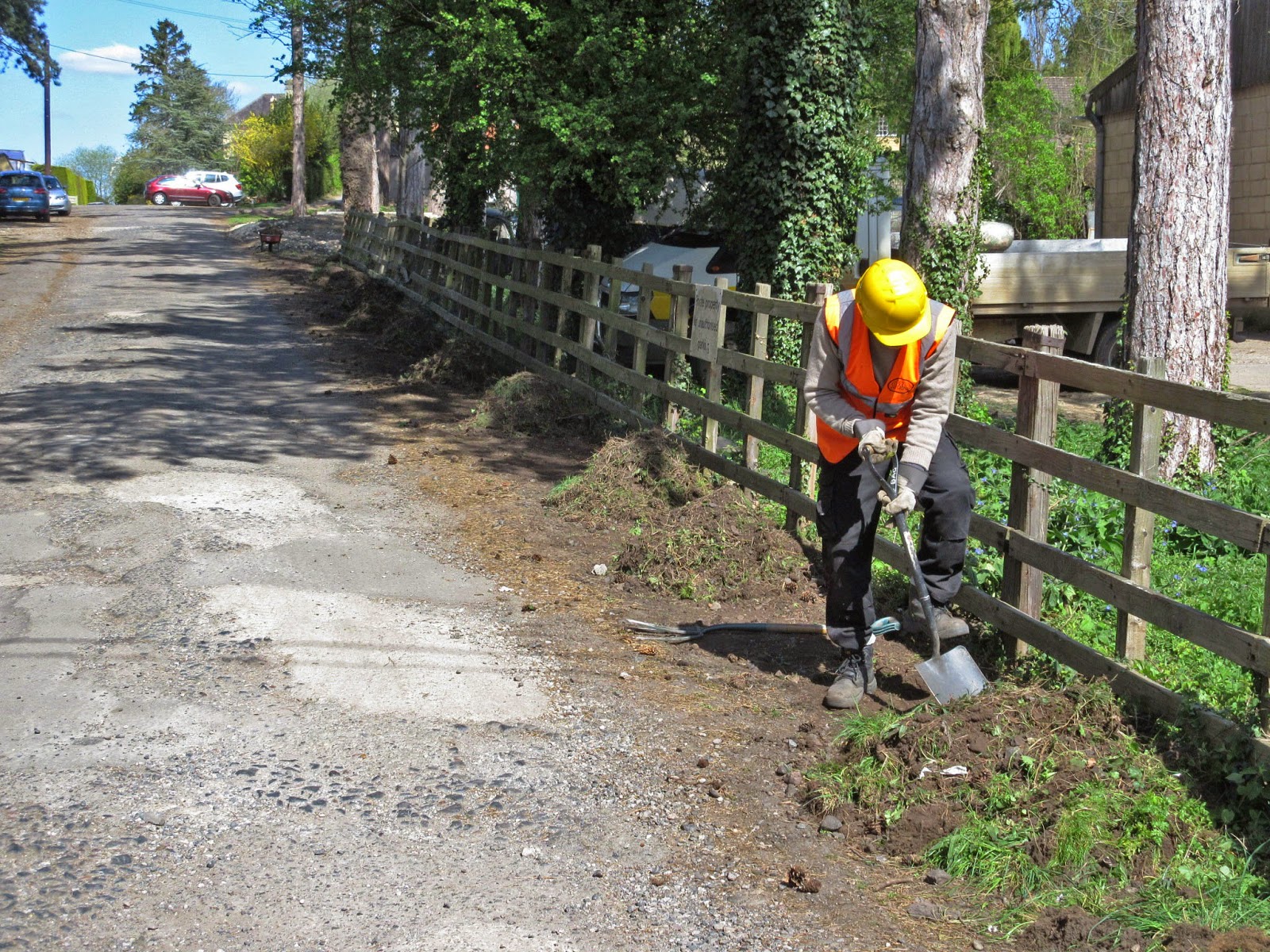 Finally, we always try and keep the presentation of the Station Driveway neat and tidy so that it doesn't look too much like a building site.. Of course mother nature teases us by making the grass and weeds alike grow at double speed! Here Dave B is clearing the verge and further down John B is tidying up the entrance. 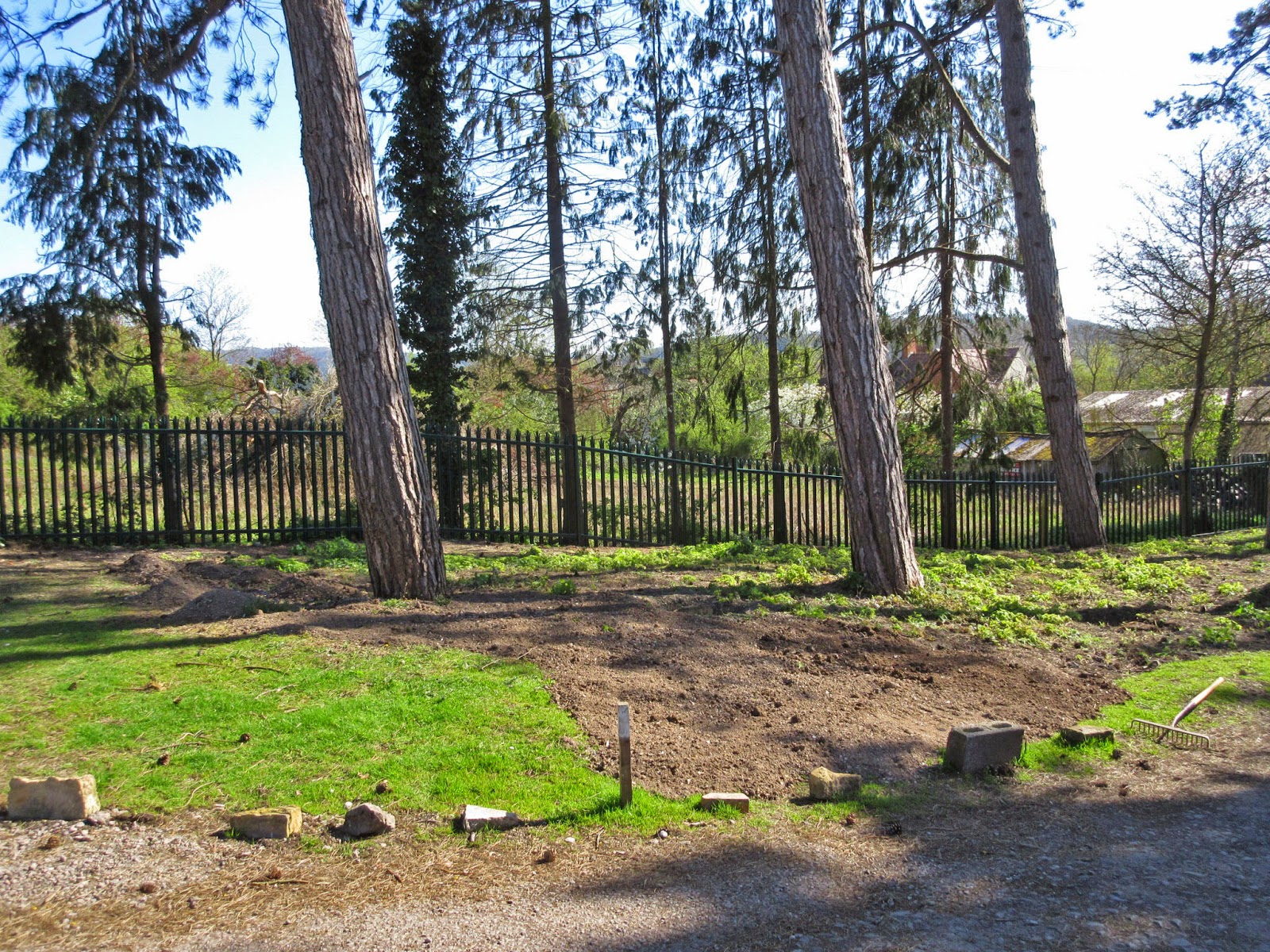 Jo put about 25 wheelbarrows of topsoil in the area under the trees up the drive, ready for seeding. more to follow.

The end result, when we have finished, will look very pleasing. We are going plant native shrubs down the fence line and along the foot path which will meander up through the trees.

Great progress everybody and congratulations.
However I note that Bill expressed concern about fund-raising a couple of weeks ago. Looking at the Donation collection on this site it seems we have contributed the grand sum of 1165 Pds since last July !. If this is an accurate figure there is real reason for concern. Can I suggest that everybody reading this (other than the working volunteers) send at least a small amount in the next few weeks to indicate support.
Thanks,
Mike

I don't think the MyDonate tells the whole story, as its not able to get the GiftAid back some of us do not use it to make a contribution.
Think I saw 9 of the signal box sliding windows were sponsored so thats at least £2K for example

All,
I don't want anyone who has generously donated over the years to feel that we are ungrateful for that. It has kept us going!

Nevertheless neither do I want the project to hit the financial buffers. There is a great deal of steelwork required for the next stage of the Station Build and if anyone has been waiting to make a donation, I would say now is the time!

Thanks to all the supporters, financial or otherwise. We can't do it without you!
Bill

So what is the approx cost of the station build and what is the time scale for us to raise the money? bearing in mind not all the materials have to be on site from day one.