Having been doing this Volunteering lark for a while, I can quickly tell when moods are high and thoughts are positive. Today was such a day and the 22 volunteers gave of  their best to keep the Broadway show on the road. 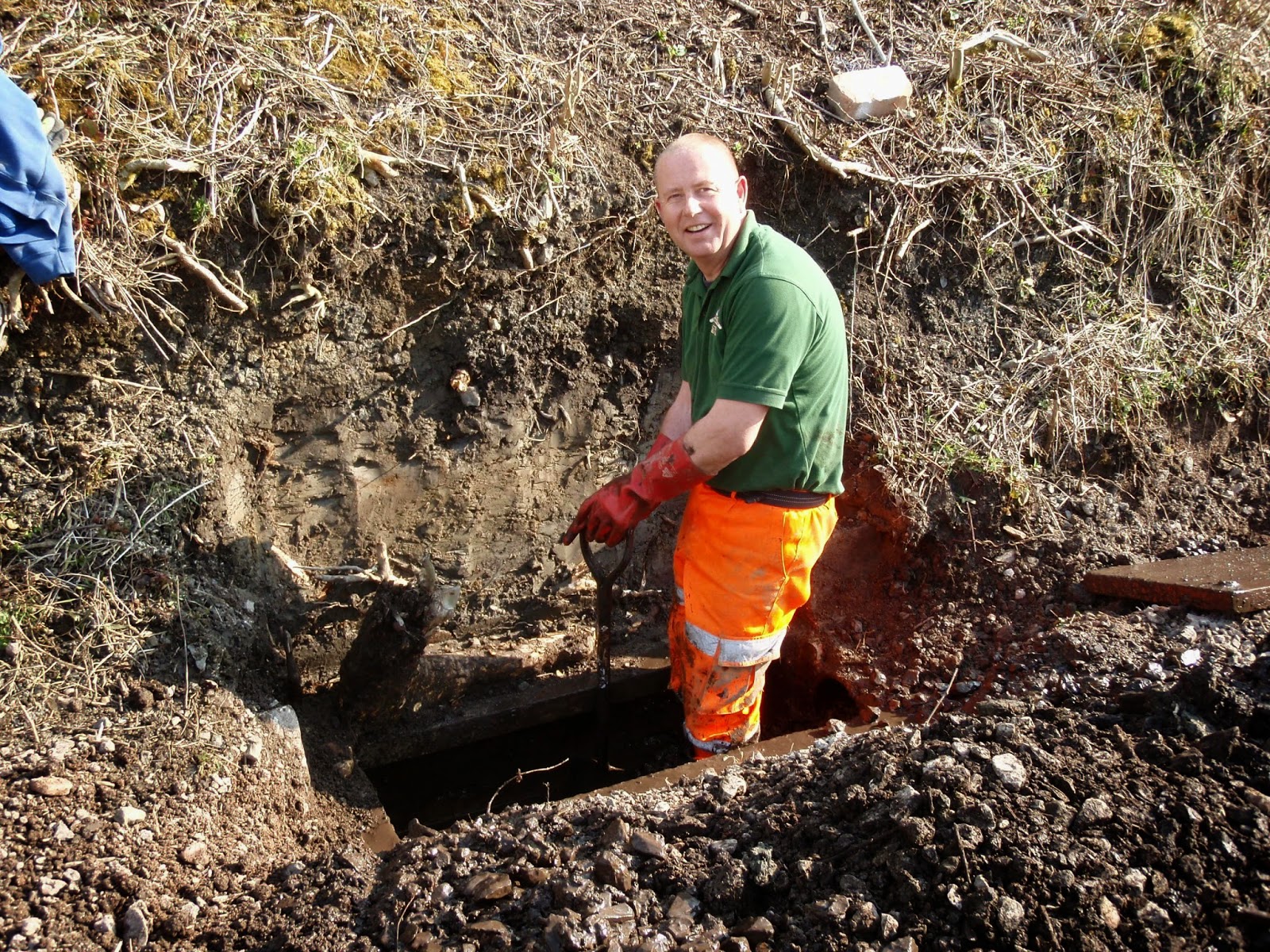 I have to start with the drain cleaning contingent - as I walked up to the northerly boundary it became more and more  comical to see a grubby  face popping out of at least half a dozen catch pits and all with a smile (or was it a grimace) on each face. We had Andy Protherough and 2 of his hard working chums giving a lead and a steer as to the most effective way of clearing each pit and rodding it through.

Jim Hitchen was keeping an eye on progress and he sent the following report:-

Just a brief update on progress.  Another magnificent effort on catch pit clearance today.  We were fortunate to have the services and expertise of Andy P and his colleagues Alistair and Keith. 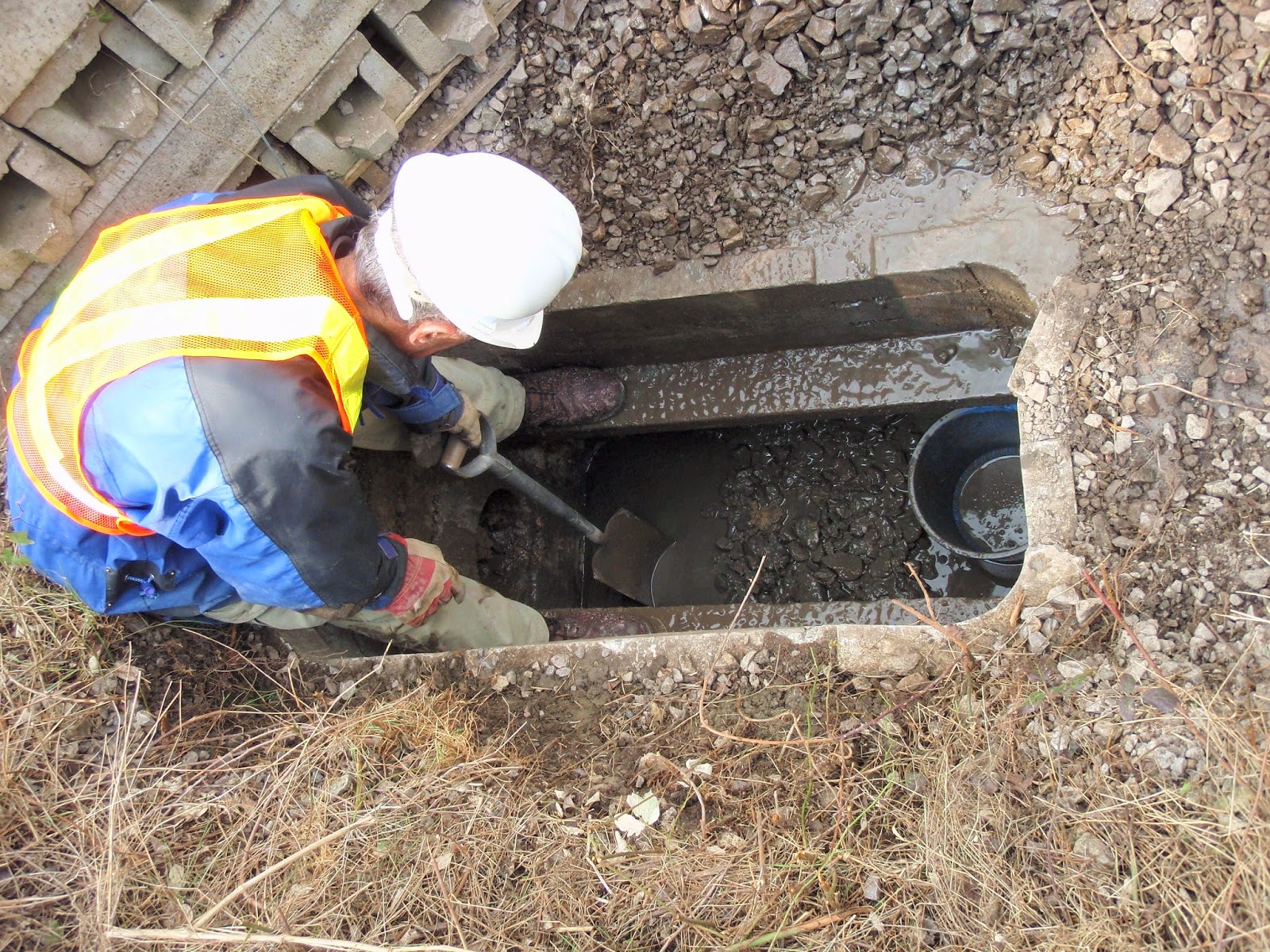 From the Broadway Group we welcomed back Ron after his winter recess, and our own regulars Rod, Terry, Steve, Keith, Clive. Hope I haven't missed any one!! 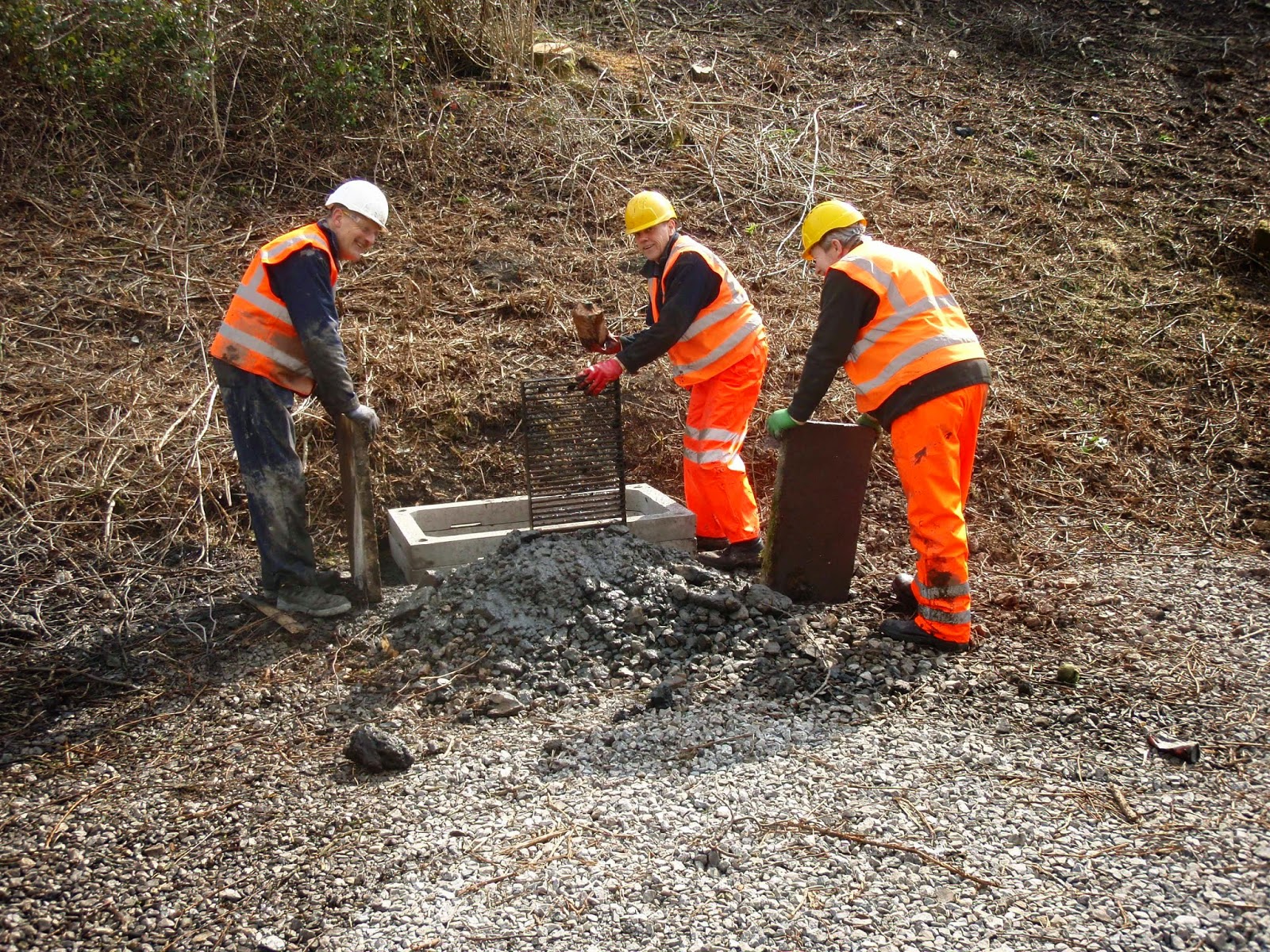 Of the five pits that were not visible at the start of the day three have been found leaving only two which will require mechanical assistance to uncover.  One of those found has been completely cleaned out along with a further three which had been started on Saturday.  Thanks to Andy more new drainage rings have been delivered to site and fitted, or are available for fitting to the completed pits. 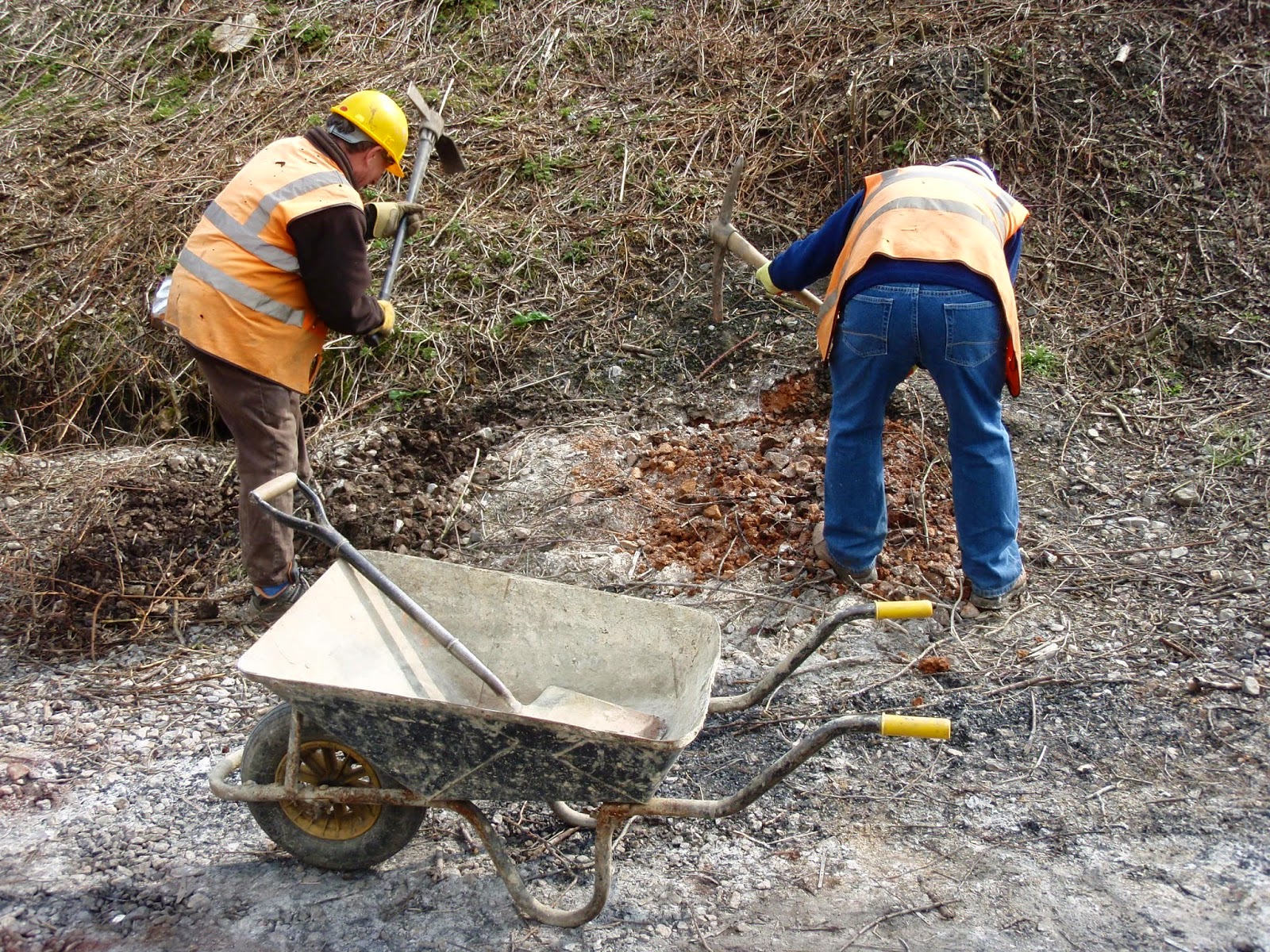 To be honest I had no idea how long this job would take, but thought it might take up to 3 months or more. Not so - The progress that has been made over the past weeks has been terrific and Jim's prediction of a couple of more shifts seems spot on. We can now join the centre drain to the side drain (on the Malvern side), which will then allow us to switch to maintenance mode on all of the drains. 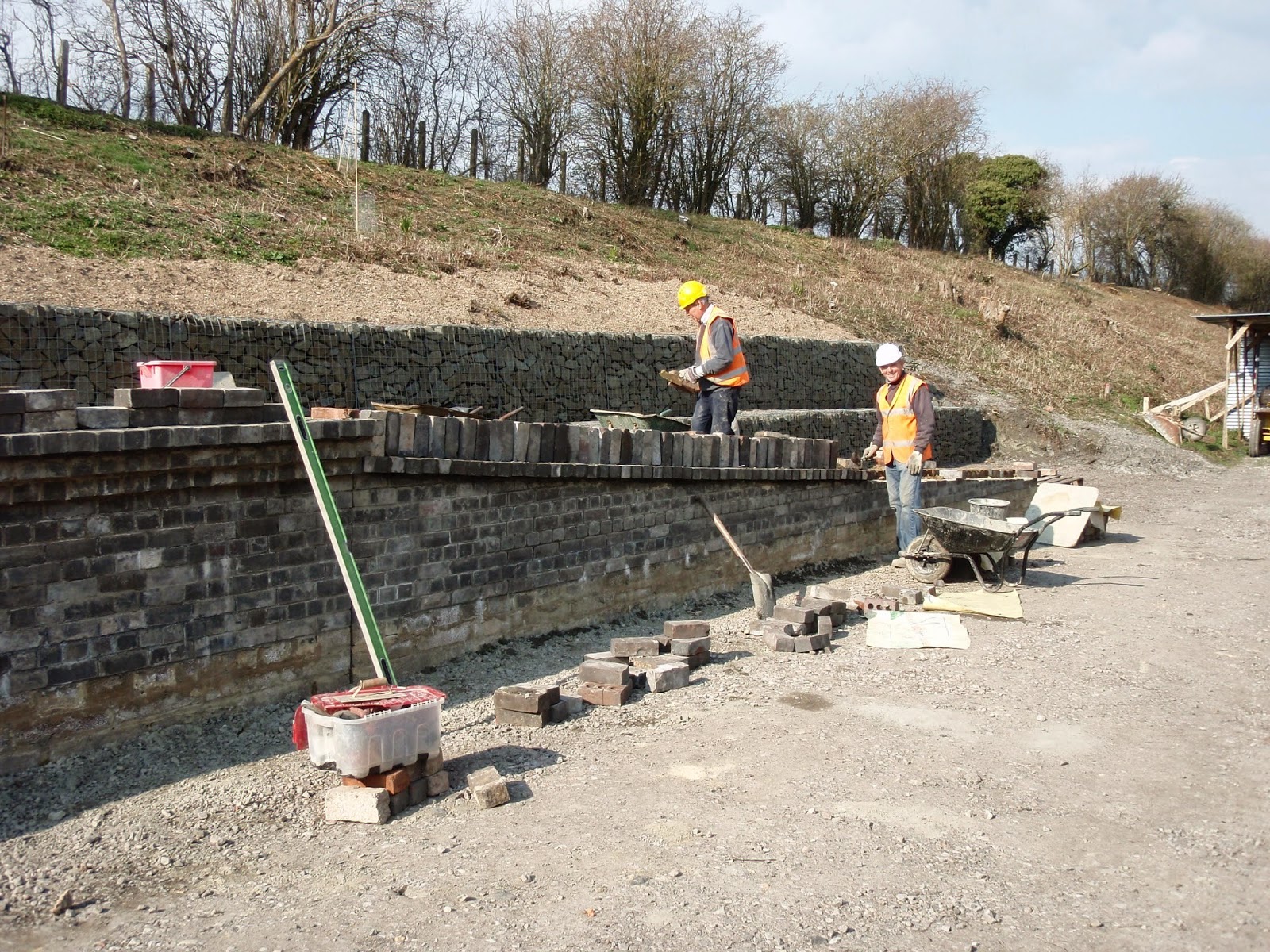 Moving back to brick laying, the Platform 2 ramp was getting its next course of corbelling. Here Roger B and Peter H continue the good work, in what looks like some  pleasant afternoon sunshine. 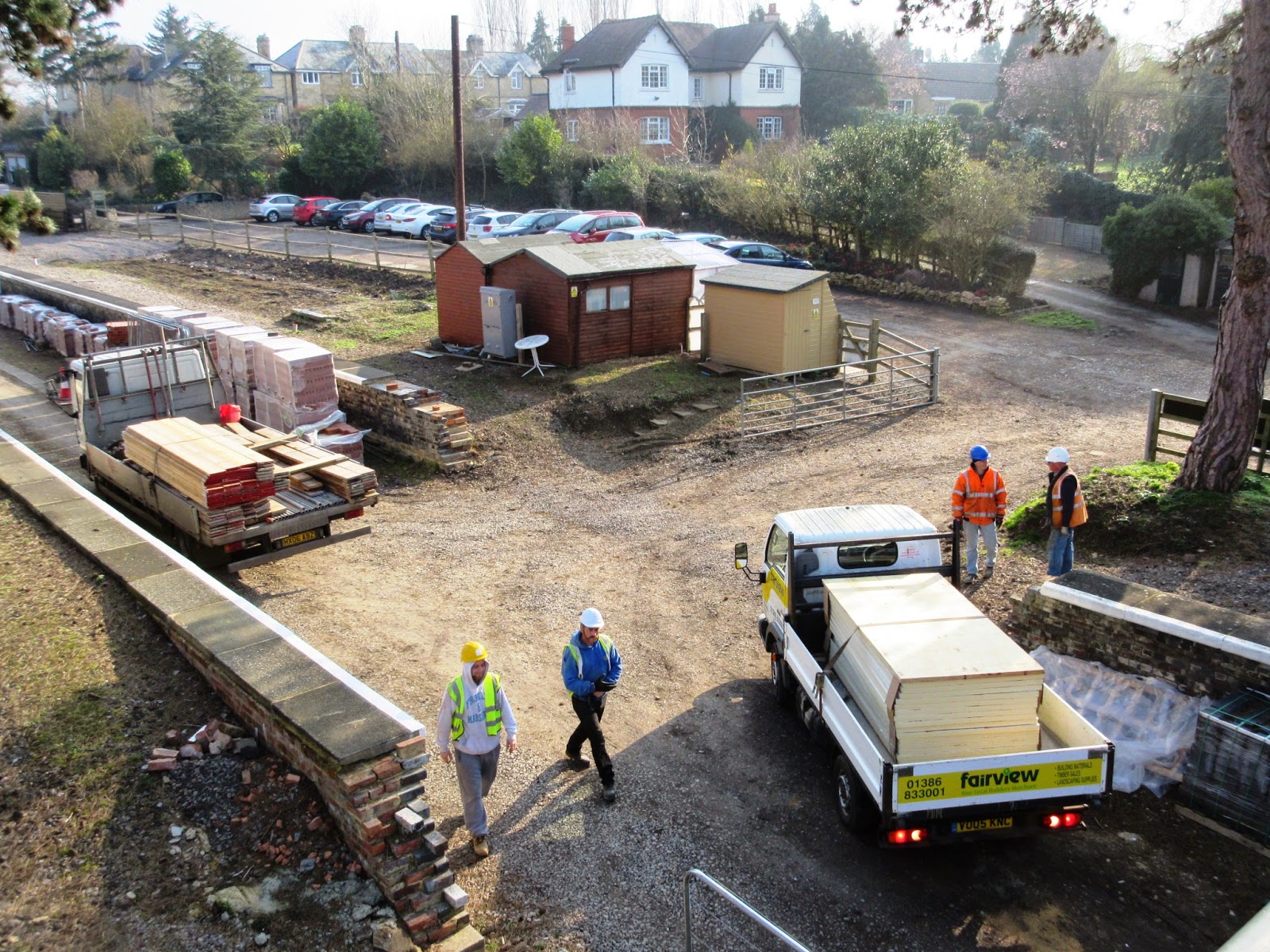 Then down on the Signal Box it was all systems go!  Here the  CSL Scaffolding lorry is waiting for the Fairview lorry to drop off its load of insulation and  roofing felt. 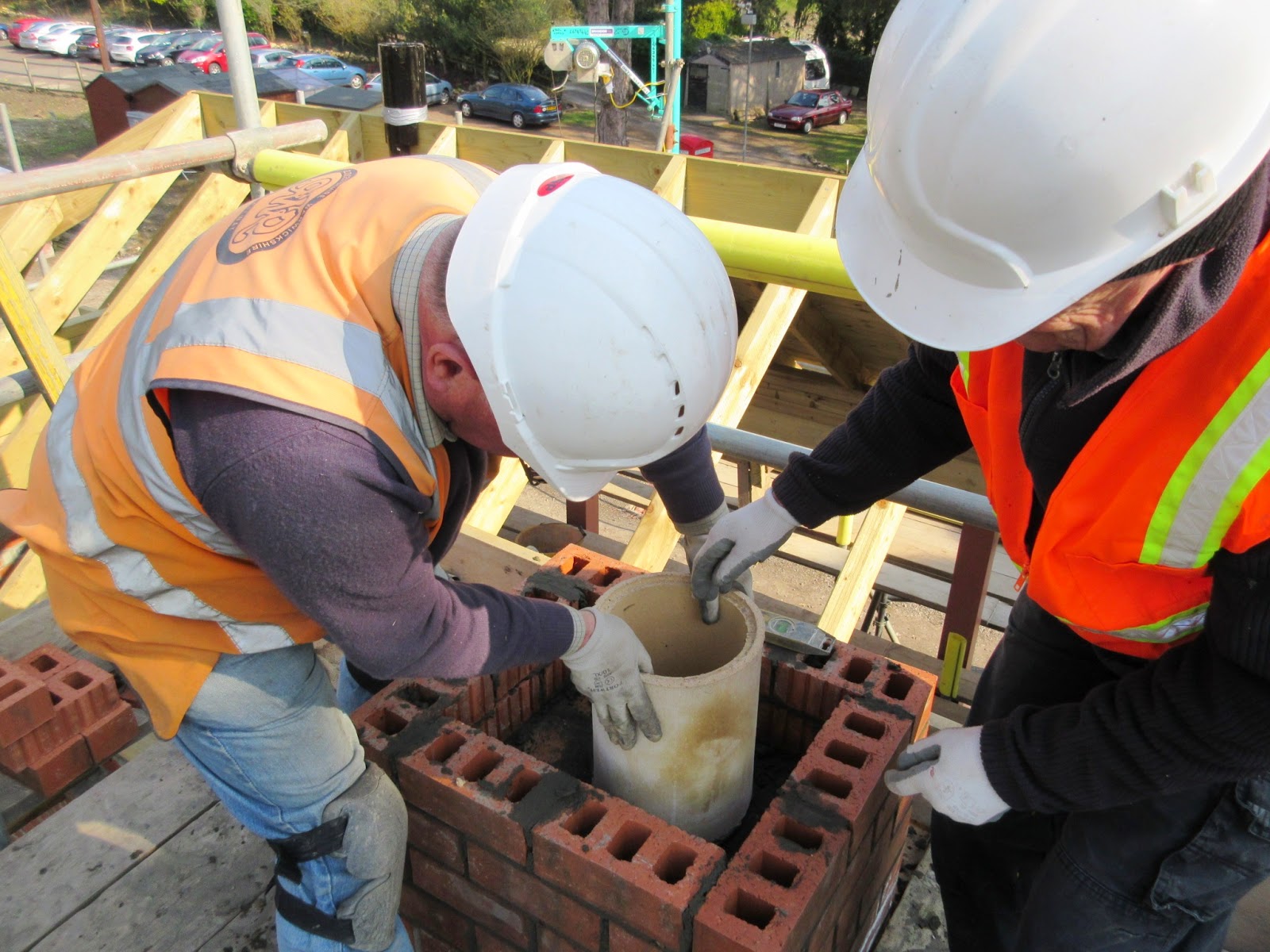 The scaffolders were on site to raise the scaffolding for the chimney to be completed. It was a quick job, well done and in a twinkling of an eye Bob W  and Paul were laying bricks and flu pipe.

All of the reds were laid by the end of the day, with 2/3 courses of blues and a chimney pot  required to finish it off. 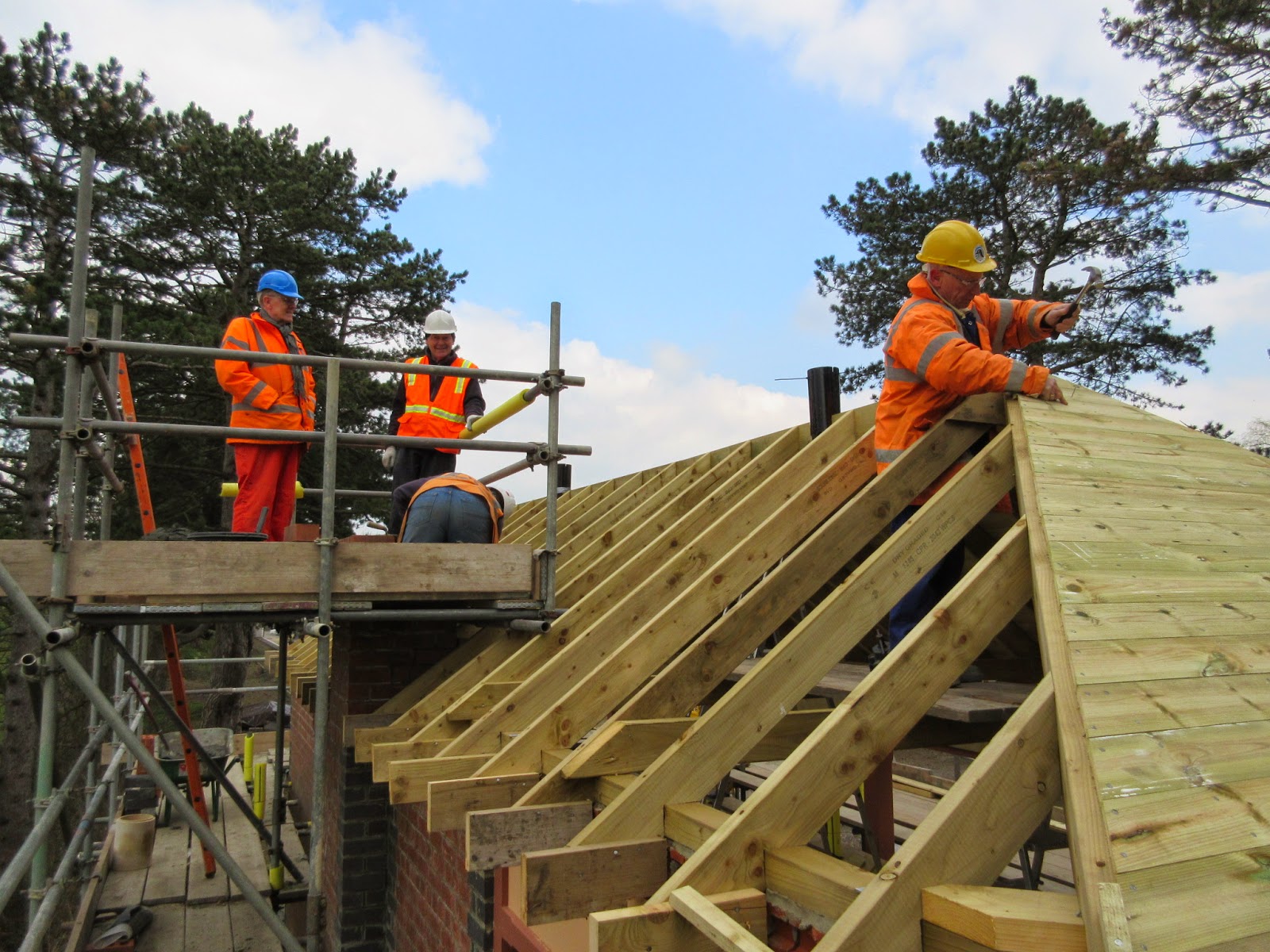 I have to say I couldn't resist going up into the crow's nest and believe me, two things strike you - the view over the site, and more importantly the sheer magnificence of the structure below. 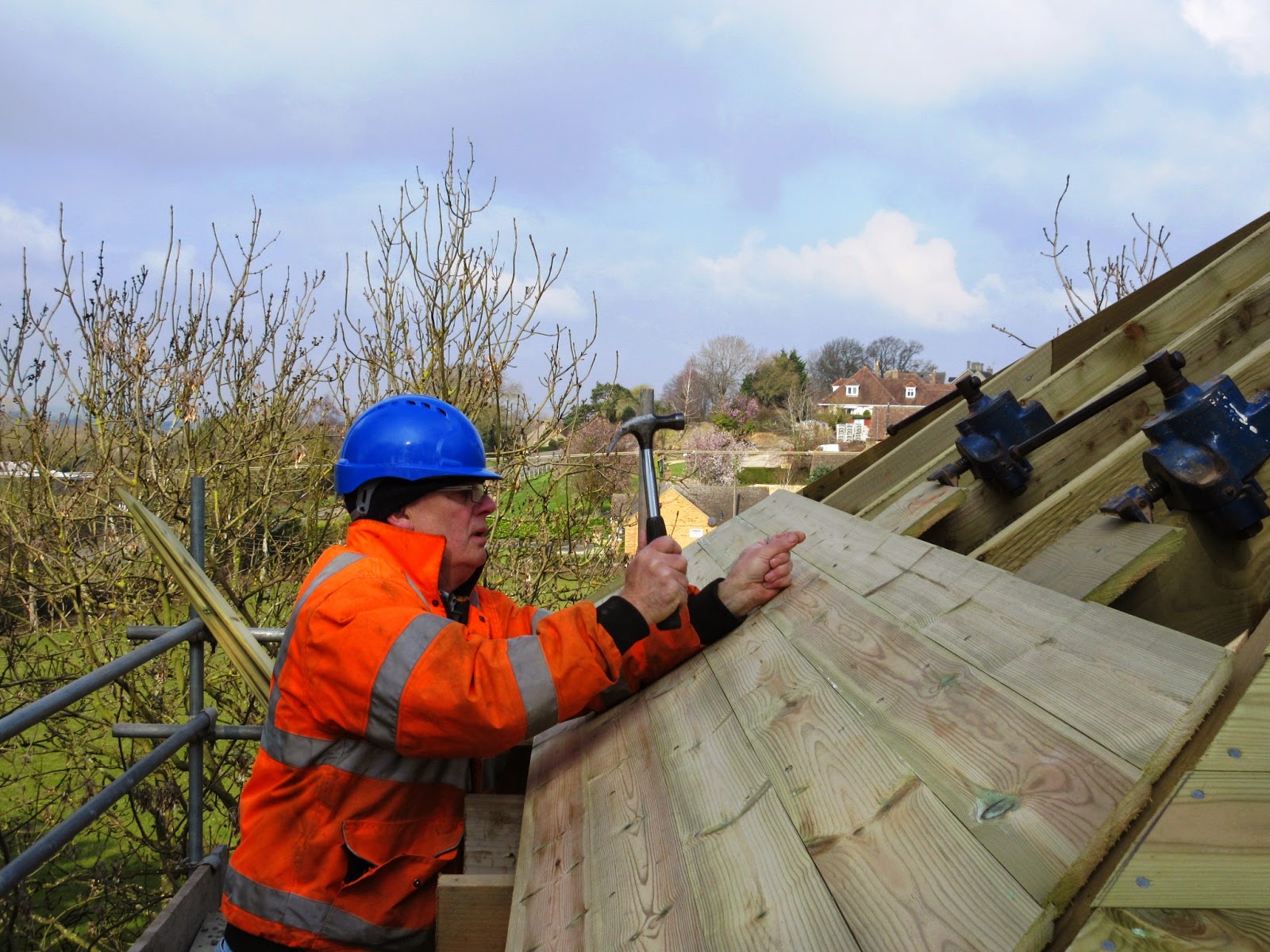 The T&G cladding was going on nicely on the southern gable end.  Here with hammer in action is  John S walloping in the nails, Tony was up on the apex of the roof steering each board into position. Jo made up the team by making sure tools were to hand and nobody bounced over the edge. 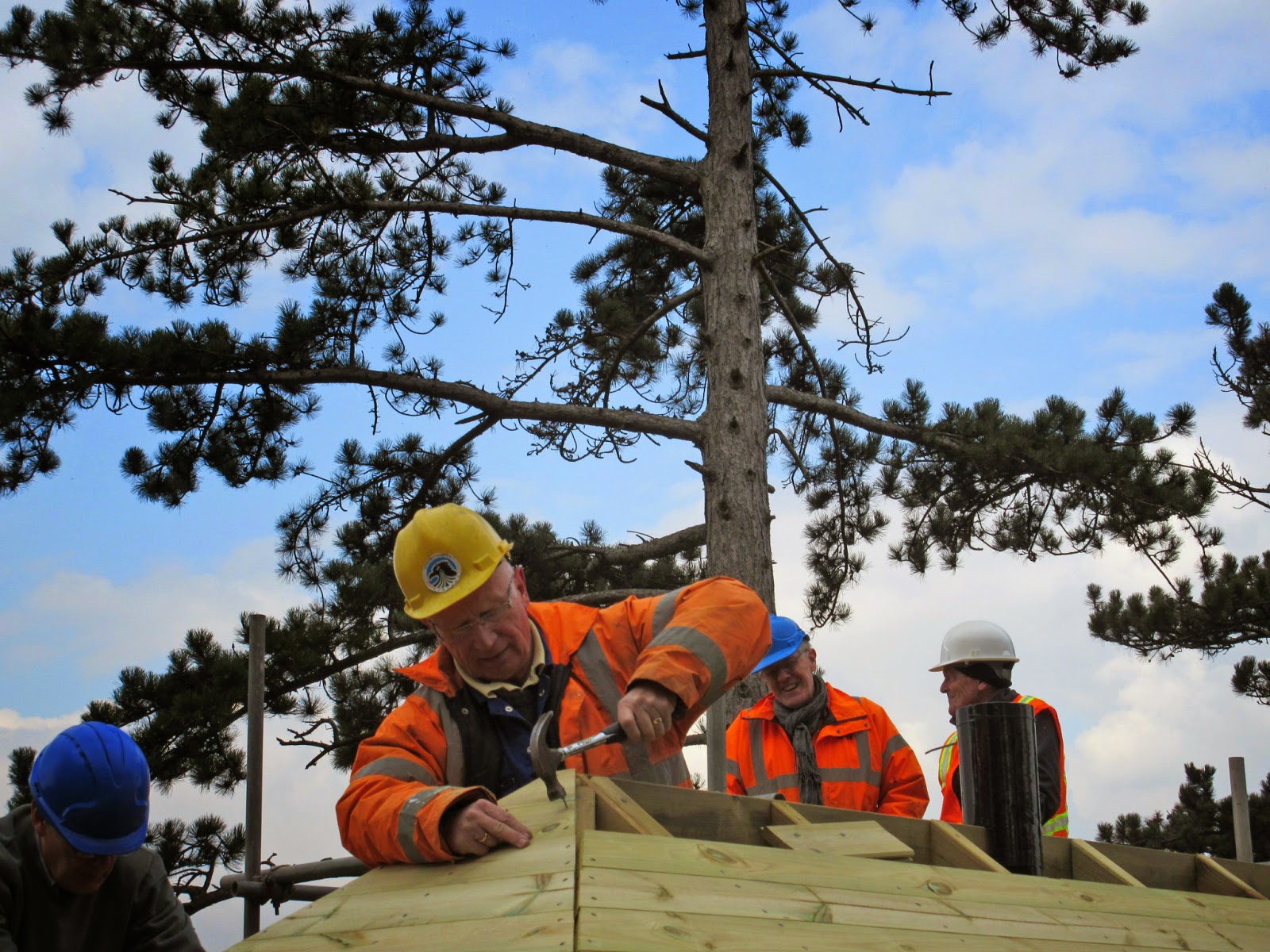 As I say it was one of those good days -   I think Julie did well at shaking the loose change out of the visitors.

A well done also to the chaps who were keeping the bonfire going by way, your hard work didn't go unnoticed.


And one more for luck - how about that!! 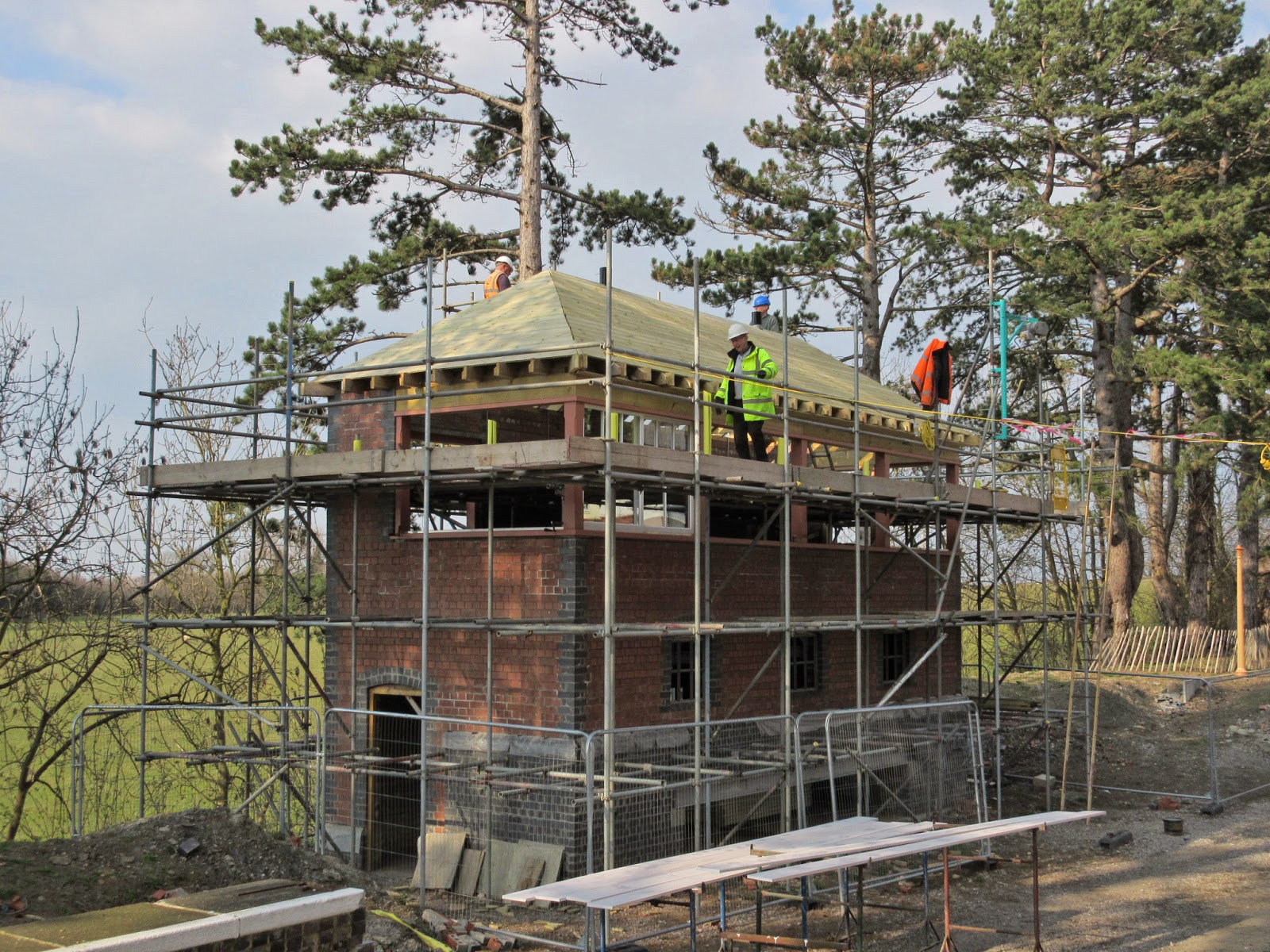 "...has been terrific and Jim's prediction of a couple of more shits..." What the f?!

The freudian slip seems to have been corrected! Well done on progress once more folks!

How long have concrete drainage rings been used on railways, and what is the likely provenance of the ones we have? Are they BR 1950s-70's or GWR?

I have a chimney pot if you want. It is cream with louvres. Gordon Smith

As far as I know, concrete has been used for most items on UK railways since the 1930s (especially the Southern) and much of what is now the GWSR ballast formation was "blanketed" and drainage updated in the late 1950s. Indeed, I have a "temporary" S&T token marked "Willersey - Honeybourne West Loop" for the period when the line was singled during the blanketing operations. Hope this helps.

Gordon,
Thanks for the offer of the chimney pot but we do have one that will suit. Cheers

I see in "steam railway" that Colne Valley has to close by year end. Is there anything there that the GWSR could help them out by relocating to Broadway?I believe the station even has to be flattened.

^ They might transfer their assets to the nearby East Anglian Railway museum.

See the Hinton on the green website, it refers to the BR upgrade of the Honeybourne Line in the Feb to Mar 1958 period. It also shows the Cornishman diverted via Evesham and Ashchurch!

Why does the Colne Valley have to close?

^ An Australian businessman owns all the land the Railway is on. He has given them notice to stop all operations by December 2015. All buildings, tracks, signals etc must be demolished/removed by 2016. It has been reported that he thinks the land is on a 'prime location' for housing, it is not! Please can everyone spread the word and contact the CVR to donate funds to purchase the land, otherwise they will be lost!
Thanks
Aaron

Aaron,
without a bottomless pit of money, is it better to let a short track railway go and use available money to extend where possible?
Being Westcountry Bodmin to Wadebridge-Buckfast to Ashburton- GWSR to Honeybourne & even WSR to Taunton has more appeal to me.
Same question can be asked about locos waiting for preservation.
I'm thinking about Masbury station, lot of effort but went nowhere.

Does the CVR serve a purpose to the heritage movement? Maybe it gives a steam experience in an area with little steam activity, but a mile long line is too short to be viable surely?