Well some days are good days and some days are great days - today was one of the great ones! This, I should add is not because of my endevours, but the hard work of the Volunteers, both at Ashchurch and Broadway.

A Team of 9 at various times made great inroads into the brick recovery. Here is Terry's report:

I am pleased to say that in the end we had 9 Volunteers at Ashchurch, and the final tally was 13 palleted and shrink wrapped bricks stacks and 4 bags of broken bricks. This was excellent progress, we had teams of brick cleaners, brick retrievers and brick stackers and it seemed to work like clockwork. An excellent effort by all the team. I am pleased to say that whilst we had our 11.00 tea break, we were visited by Ken (now working with Carriage & Wagon) and he didn’t take much persuasion to join in and help on site. It was great to see him.

I hope that the slab laying at Broadway went well.

We all had a brilliant day and enjoyed ourselves immensely. I will try to get hold of Paul to see when he is available to move the bricks to Broadway. 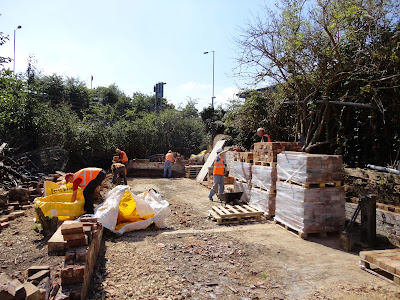 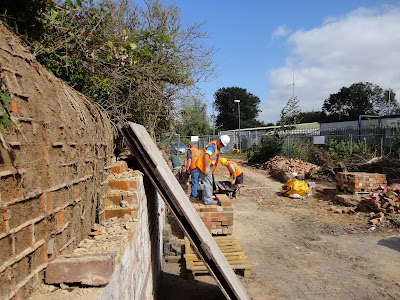 At Broadway another team of 9 set to on a number of tasks. The main task after lunch was the placement of the final coping slabs on 1B and laying the first one on the slope of 2A! Roger Peter and Tony seem to have made light work of it. The finished result however is a joy to behold. See pic below.

In the morning the tidy up of the slope behind 1B  continued with the clearance of weeds and profiling of the embankment.

At the other end of the site Jo was lost in mist of red paint dust as he worked further on preparing the telephone kiosk. Roger joined him in the afternoon and I think its fair to say they're  nearing the point of new paint application.

Finally, last but not least the two Peters fitted  the hand rails to the viewing platform. 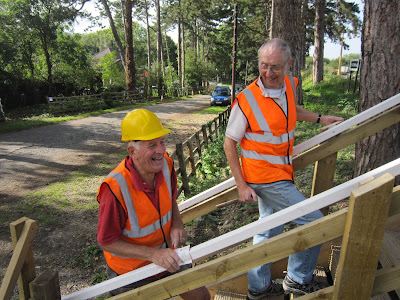 I have left this picture till last because it says so much about the good humour and camaraderie among my fellow volunteers. It came out in Terry's report above and I feel strongly that it forms the basis of our success.
Posted by Bill at 22:21