10 Volunteers were on site today and, although some heavy showers from time to time had us running for shelter, a great deal of good work was achieved. 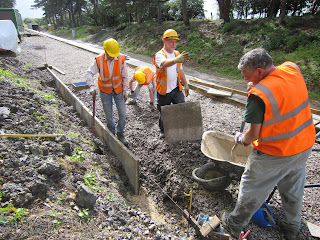 A friendly rivalry between the Wednesday Gang and the Saturday Gang saw a competition in play for laying the Platform 1B rear slabs. By the end of the day a further 10 slabs had been laid to add to the 3 laid on Wednesday.


I think these smug smiles say it all. I should point out that in the moments when Jo wasn't snapping photos he was shovelling ballast and mixing concrete. 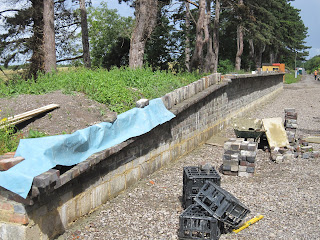 At the other end of the the Site, Roger Brindley mounted a one man campaign on laying the final courses of corbelling on 2A. One full course was completed on the ramp, which was a valiant effort. 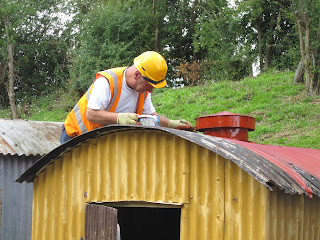 Clive, something of a Scarlet Pimpernel, could be found up a ladder in the morning, painting some red oxide on the roof of one of our lamp huts. Rain stopped  play by lunchtime, which then saw him pop up in the slab laying gang!

We have had a request from a neigbouring farm to deal with a  patch of Ragwort that has sprung up in the car park. Ragwort is toxic to farm animals and we need to ensure that its presence in minimised on Railway land. John Blofield made a good start at clearing it in the car park. Rain again stopped play and he got a terrible soaking for his trouble! We will set to on further clearance on Wednesday. If you are interested in what Ragwort dangers are then use this link.Ragwort

I also managed to have a look at the next area for some preparation on Platform 2 (see ringed area in the  diagram). We will be looking to remove surplus spoil that was pushed up into the trees and profile the embankment ready to put the next section of platform footings in.

Cheltenham Racecourse station's platform 2 is to be rebuilt (GWSR website news item of 29/7). Scattered along the site, and buried within an adjacent bank, are the bricks from its demolished retaining wall. If not wanted for re-use at CRC could they get a new lease of life at Broadway?

Richard,
I am told that these bricks are held together with very strong mortar and the bricks break before the mortar. I will get this verified and review their use at Broadway.
Bill

Hi Bill,
I came to see you last Saturday(4th)about the ragwort thanks for responding so quickly I had intended coming round and clearing it or helping to clear it,unfortunately I am working nights,(on duty as I type) which somewhat restricts my daytime activity.Once again many thanks to John for his work.
Allan Chapman.(Signalman Norton Jct)

Plan for plat 2 look good Bill. Who knows what archeology you will find when you shift the spoil heap

Re: Cheltenham Bricks - According to the Autumn 2001 "Cornishman", about 5000 reusable red and blue bricks were cleaned and put into storage. I'm sure that we would have been offered them by now, if we were meant to have them!

Regarding the above reference to a 2001 Cornishman article, can it really be referring to bricks from the CRC P2 retaining wall? It is pictured, minus edging, in place in October 2005 (see GWSR website article of 29/7). Demolition had yet to happen.

Thanks for all the comments - I will investigate as appropriate. Bill