Well a great turn out today (15 in total) and the jobs spanned a wide area.

We had a polite request from the local farmer for help to clear the the Ragwort on the Railway land, prior to the ploughing and re-seeding of  the field adjacent to the car park. Little did we realise what a task was being taken on, but, as ever, the volunteers were up to the task!


Work continued on the next level of corbelling on the ramp of 2A. Bob White, Roger, and Mike kept at the task all day and as I've said for the past 3 weeks "We're virtually there!" 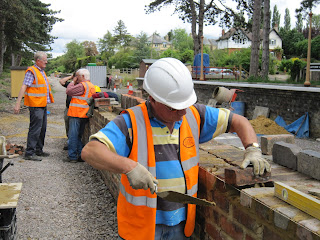 The master at work - Bob finishing off the backing bricks. In the background you can see Ron Briz having a blub to the teacher because someone's pinch his Beano. No, not really we were having a chat to Stevie Warren about the next section of footings on Platform 2. Watch this space! 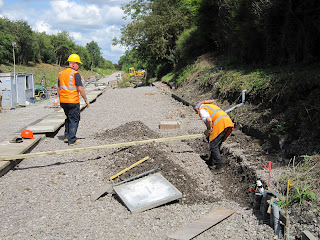 We endeavoured to place some more slabs behind 1B but I'm not sure how far we got. Here Peter H , always the last man standing, digs the trench for the next section.

And last but not least four lads (I use the words loosely) went over to Ashchurch to start the reclamation of the the bricks from the old stables.
Cheers Steve, Rod, Andy, and Bob J.

Nice to see some of the lads taking flowers home for the wife! Bet that earned you some browny points.

The 'flowers' were probably received more positively than the brick dust and grime from the Ashchurch site. Nice tide mark left in the shower cubicle!! May need to look into a portable shower for next time.... Andy P.