The Broadway Area Group of Volunteers had their Annual General Meeting this morning and it  was well attended. the First AGM I attended 2 years ago took place in our mess hut at Broadway and we didn't fill it. Today we took up residence in the the Lounge at the Broadway Football Club and filled the room! How times have changed! Thank you to all the Volunteers for all their hard work this year. Unfortunately everyone took took one pace backwards when the Chairman's position was being re-elected, so here I am, once more giving the troops a bit of a steer here and there and trying not to get in the way to much.  Its a privilege to be associate with such a friendly and hardworking bunch of people and I  look forward to another year of challenges.

The AGM diversion in the morning limited the amount of output, but it didn't matter - it was sunny afternoon and it was very pleasant to sit in the sunshine, mug of tea in hand and put the world to rights. The bricklaying die-hards continue with the 1B corbelling and there may be another 2 days work before its absolutely completed. 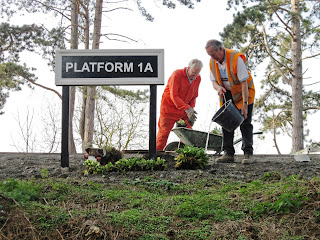 Following some rescue work undertaken last year to save some wild primroses behind 1B Peter and I planted them back behind 2A. Dare I say it but they need some rain to survive!

Dave B had some good news this week in that we have had some "veiwings" from a pair of blue tits in a car park nesting box. Assuming the rise in stamp duty doesn't put them off we may have an ongoing story here!

Sorry if this is a bit of a ragged post - things will get back to normal  this week, although saying that a team are off to Taunton this Wednesday to retrieve 4000+ bricks from the old railway facilities. This a finely tuned military exercise and will  have a post all of its own on Thursday.
Posted by Bill at 21:03

Congratulations on your re-election Bill.

Well-deserved and reflection of the determination and vision thus far and for steering the tremendous work at Broadway which has achieved a great amount in such a short space of time.

Wow that platform is long, I hope you are making proper allowance for the curvature of the earth!

Congratulations again Bill. Shows you are the right man for the job, and how wonderful No 1 looks. Very nice vote of confidence from Darren also. It is truly amazing what has been achieved, and the rest of the year still beckons.