A Piece of Honeybourne is Coming to Broadway 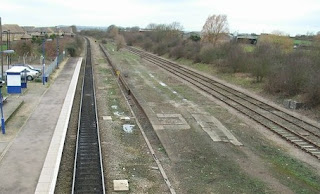 I have made  arrangements for the walls (red brick) and slabs from the defunct Honeybourne central platform (see above) to be delivered to Broadway. The bricks will be of great assistance in continuing to build the extremities of the platform walls. Now here's a question for you all " Does it matter  if we use red brindle facing bricks in the platform walls at Broadway?" From my point of view we should use them as a  backing brick in a composite wall, with blue bricks exposed, but others say, because of the scarcity of blues, it doesn't matter. What do you think? 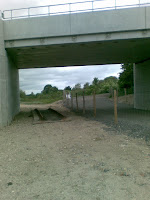 As an aside, here is the GWR trackbed at Honeybourne. A section of rail has been carefully laid for us. This is where the the GWR trackbed goes under the new O W double span rail bridge. Not up to GWR  Pway standards me thinks, but only seven miles( or so) to go from Laverton!
Posted by Bill at 20:15

Bill
might be worth getting your contacts to look to Newport.
Platform one has been shortened and the platform slabs just lifted out...

There are three courtses of action open to you:
1. Build in blues as current. However there might be a very limited amount of blues to use.
2. Buy new blues - this will cost however. Can the project afford it?
3. Use secondhand reds as suggested. I understand that these were used from Honeybourne. Were they on show in the platform?
If so I cannot see a problem.

My choice would be item 1 then 2 and then 3 in that order. However I would not object to reds being used. In practice I don't think that it wil lmake much difference.

Regarding the rebuilding of Broadway Station platform, I guess the key questions to answer are: Does the mixing of brick colours have an adverse effect on the structural integrity of the platform face (ie, does one coloured brick type have considerably more strngth than the other)? and the second queston concerns authenticity (for as much as we could ever hope to replace Broadway Station as close as possible to its original appearance bearing in mind current legal aspects for public access). Were the original Broadway Station platform faces mixed or were they blue? So far I have no photographic evidence to confirm either way but many platforms appear to be built of a mixture. Personally I would stick with blue if you can but clearly much depends on availability and there will be a cost whichever route is taken.

The photograph of a track panel under the new Oxford-Worcester Line is of great interest. I have no idea who put it there but it sends a hugely symbolic message to anyone who sees it that the GWR's aim must be not to stop at Broadway but to link up with the National Network at Honeybourne to allow the lifeblood of excursion traffic and other rail access to Cheltenham Race Course.

As ever, this blog provides a masssive boost in morale to people like me who can't visit the GWR as much as they would like. If 12 people turn up twice a week to rebuild Broadway Station then we have nothing to fear! Well Done and keep up the brilliant work.

Why don't you guys get down to CRC (Cheltenahm Racecourse) and recover (a) the blue bricks lying aroound on the surface on the Malvern side past the signal box &
(b) mine the embankment for all the bricks shoved/jettisioned/dumped when platform 2 was removed.

PS don't mention this to B&S as it may upset them!

the panel of track was an agreement that I had with the Network Rail sponsor for the Bridge – it is a ‘panel of intent’.

We have passive permission to run into Honeybourne and this is also a symbolic reminder that the railway will get back into Platform 3.

Bill thanks for the reminder in the photo I need to put it on the main website!

Its me again. If you are interested in providing new blue bricks I would be prepared to pay up to £500.00 which with tax recovery will give over £600.00.

Hi Keith,
Your orignal comment above pretty accurately summed up the options - thank you for that. I do have a preference myself for using blues throughout.

Which brings me to your generous offer of support, which we would gratefully like to take up. If processed through our GWR Trust we would be entitled to gift aid as your note suggests. My email address is wm_a_britton@yahoo.com and you may prefer to follow this up with me offline.

You have certainly made my weekend!
Regards,
Bill

Thanks for the update regardng the section of track at Honeybourne. Also thanks indeed to Mr Keith Patterson, what a tremendous offer! All credit to you and others who do so much to rebuild what never should have been lost.

How many more blue bricks are there at Wisley? If we can't organise another 18 tonne lorry load, will there be the opportunity of bringing trailer loads (600kg at a time)?
Blues are best for platform faces. But we'll need reds for station buildings etc!

To Toddingtonted,
Thanks for your continuing interest in our progress at Broadway. My colleagues and I value your input, which always seem to go the heart of the matter. Donations of money are always so welcome and keep us going on a practical level. (Keith Patterson's generosity for example - absolutely brilliant). Nevertheless keen interest and sharing of ideas also is of great value to us, and long may it continue.
Best regards,
Bill

Re Wisley bricks,
We will retrieve the remaining bricks at Wisley in the next few weeks,with transport yet to be organised(or funded). I am trying to gear ourselves up with mechanical means to clean them, but lets say they're quite a challenge!
Bill

There was(presumably) an engineering reason for using blue bricks, specifically, for platform facings and around the lower courses of station buildings, not purely down to the aesthetics!

Blue bricks absorb less moisture than reds and therefore do not suffer from flaking due to freezing water (in winter, etc.).

I presume this still holds true today, so, purely from an operational maintenance point of view, it makes sense to stick to blues wherever possible?

I thought the central platform at Honeybourne was to be rebuilt so the GWR could eventually use it. I assume therefore that what you are recoverying is surplus to that objective?

Its great to see the section of track under the bridge. I suppose theres no chance of asking/paying Network Rail to put in a couple of miles more (or whatever they could towards Broadway) when they remodel the Honeybourne junction etc. I assume they have the equipment and manpower to de it faster than GWR volunteers ever could?

traveled through Honeybourne on Saturday, all seems ready for the dual tracking blitz that starts shortly, Will the new platform be built to a longer length as i would assume it would be hard to get approval to build a short platform that HSTs will stop at?

Hi to the last two commenter! There are a couple questions posed that I do not know the answer to. Sorry! I will endevour to get the answers when I can.

The old central platform at Honeybourne is to be totally removed. The GWR are to be given a platform allocation in the re configured Honeybourne Station.