Summer is back - we had a hot day today, with 18 degrees C reached at the end of the afternoon. There was a good crowd of volunteers, which quickly spread out along the site, now that we are looking towards our northern boundary and the brick laying is coming to a close. 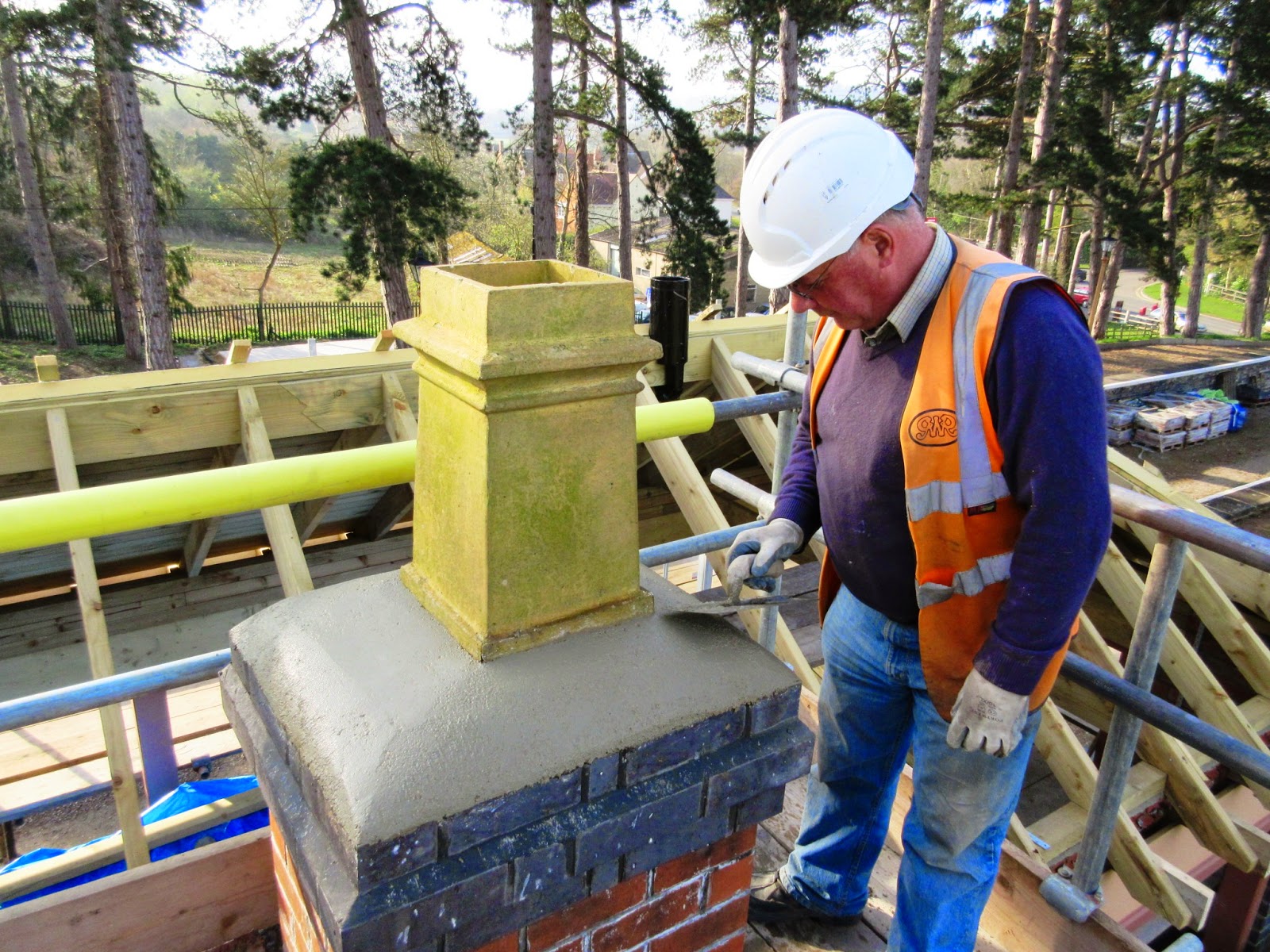 The first picture is to keep a promise: the chimney pot went up today, and you had to be there early to see it go up (before 8 am.....).
Here is Bob finishing off the bed of sharp sand mortar underneath which holds it in place. The pot sits over the extension of the last liner tube. A neat job there, Bob!
Bob had to hurry up, because as he put the finishing touch to the chimney, the scaffolders arrived to take down the scaffolding extension. And you don't argue with scaffolders ! Within minutes the platform was down again, and the roof was free for the boarding to continue to the fourth and final side. 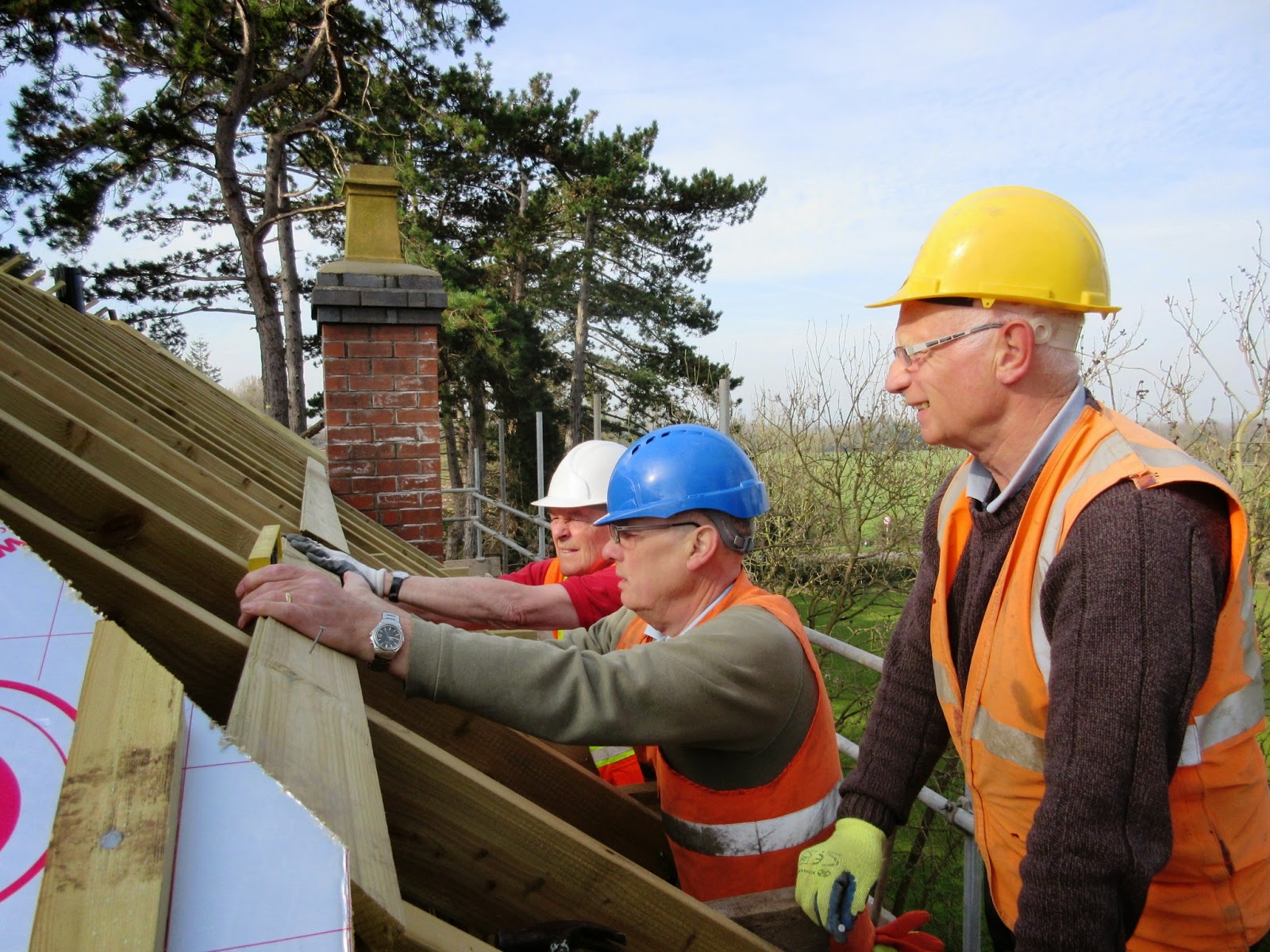 Putting on the rear was quite tricky. The roof is longer than the T & G boards, so you have to consider where to put in the join. It also has to fit around the chimney and you start at the top, then work downwards, then further up.
Here the team is measuring up the first two boards, making sure they are level and perfectly in line. You might say who worries, with all the insulation and slates on top you won't see the boarding, but in fact you will, as the boarding and rafters will be very visible from underneath, and this is a feature of the GWR type 7 signal box that we are building. 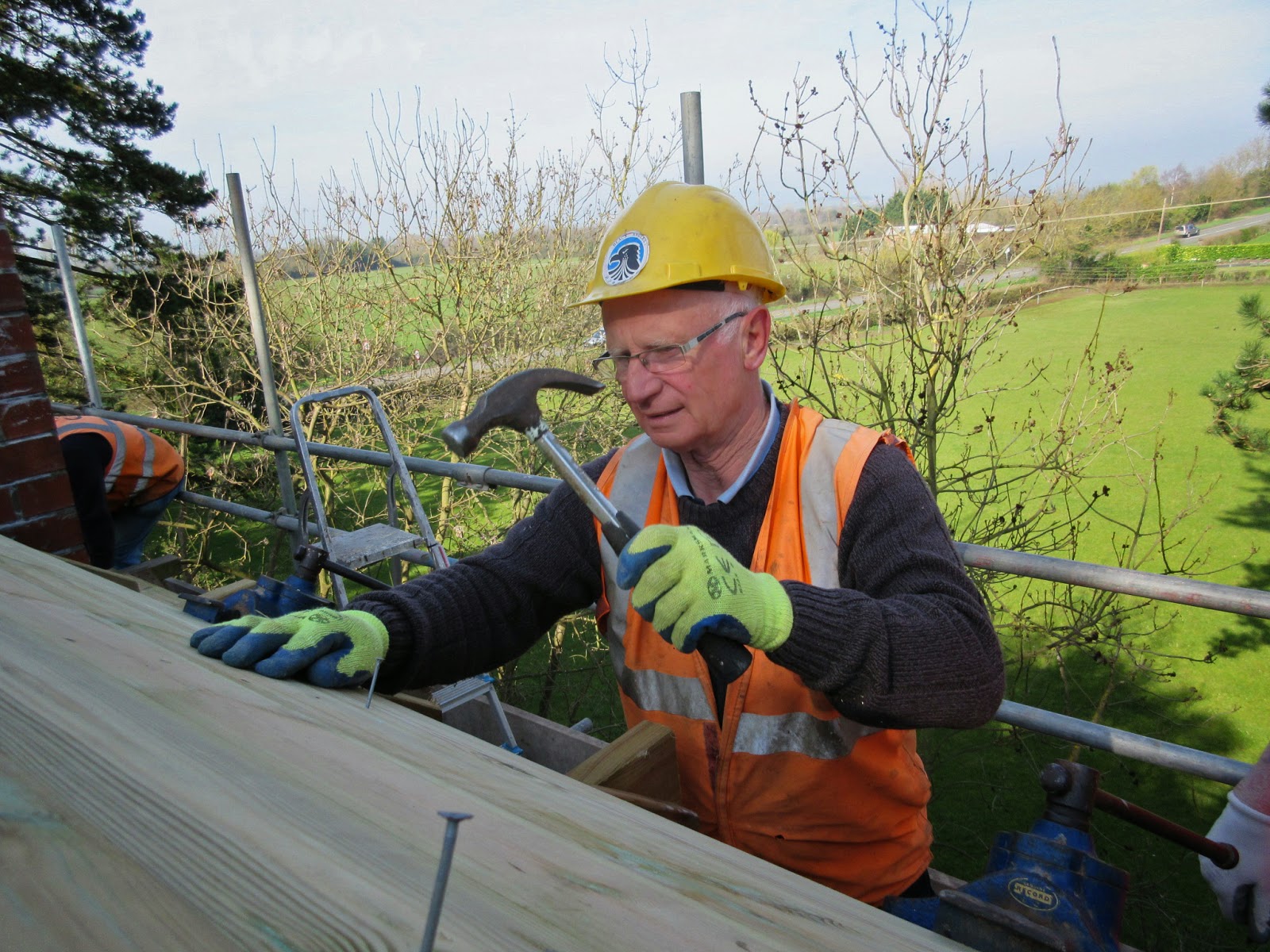 Once you have three boards up, you can squeeze them together using the vices to the left and right of Tony here, and once all the tongues are in their grooves, you can nail down the set.
Behind Tony is the lovely view you get from up here, with the pastures of the Vale in the foreground and Breedon Hill in the background. Tony doesn't have time for that though, there is a job to do. 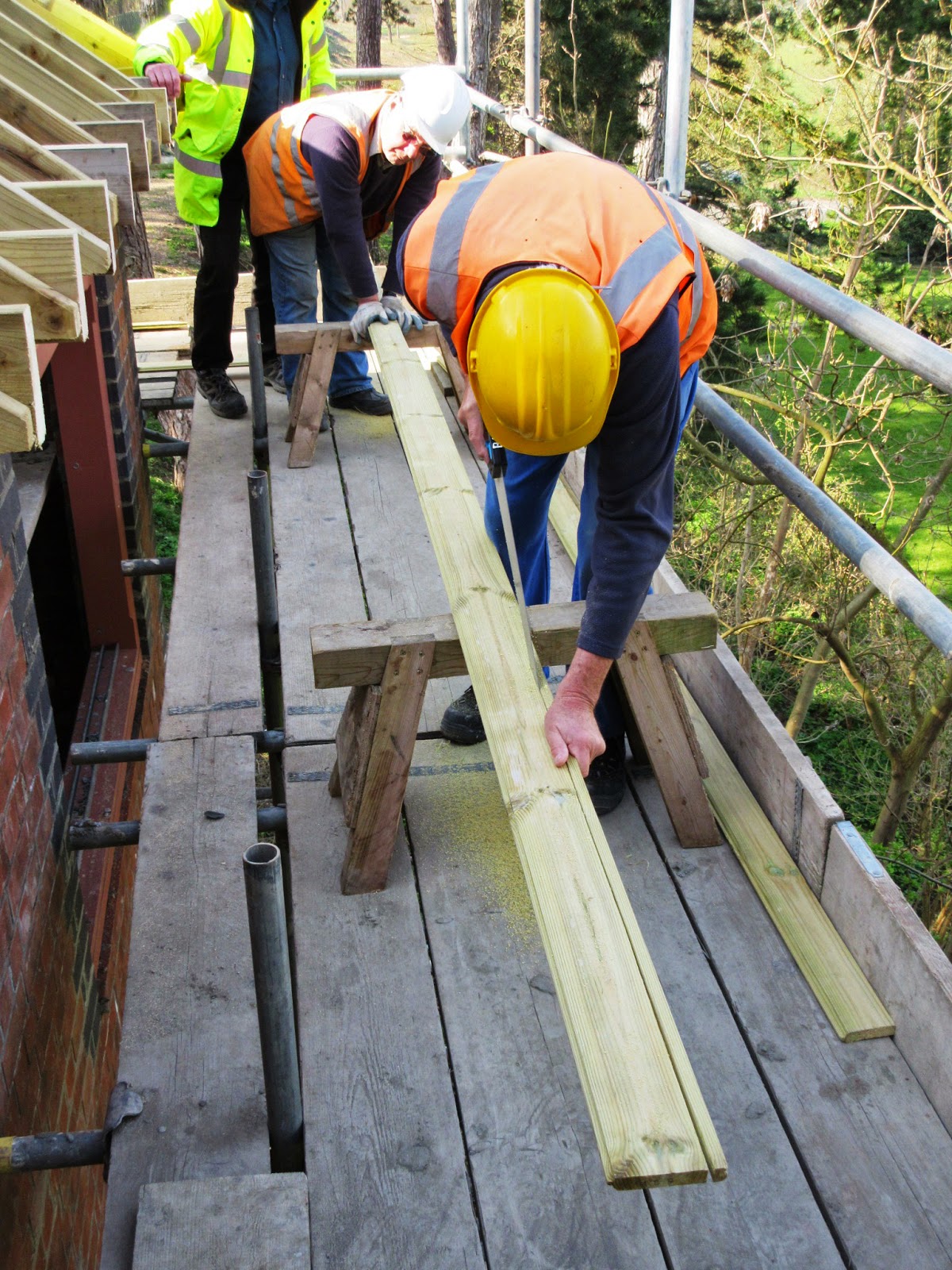 There were no fewer than 8 volunteers on the box today, so we split into two teams. The first, under the leadership of John S, started placing the boarding while the second, led by Peter Q in the picture here, finished off the soffits, which was a complicated job.

The carefully fitted and much laughed about noggins proved to be not perfectly in line, and there was much sawing and hammering to get a straight surface to which the suspended boarding could be attached. Eventually a strip had to be sawn off the outer board, and this was the signal for an interruption in the power supply, caused by rewiring going on elsewhere on the site. There was nothing for it but to grab a hand saw and get going. Poor old Peter got there in the end! 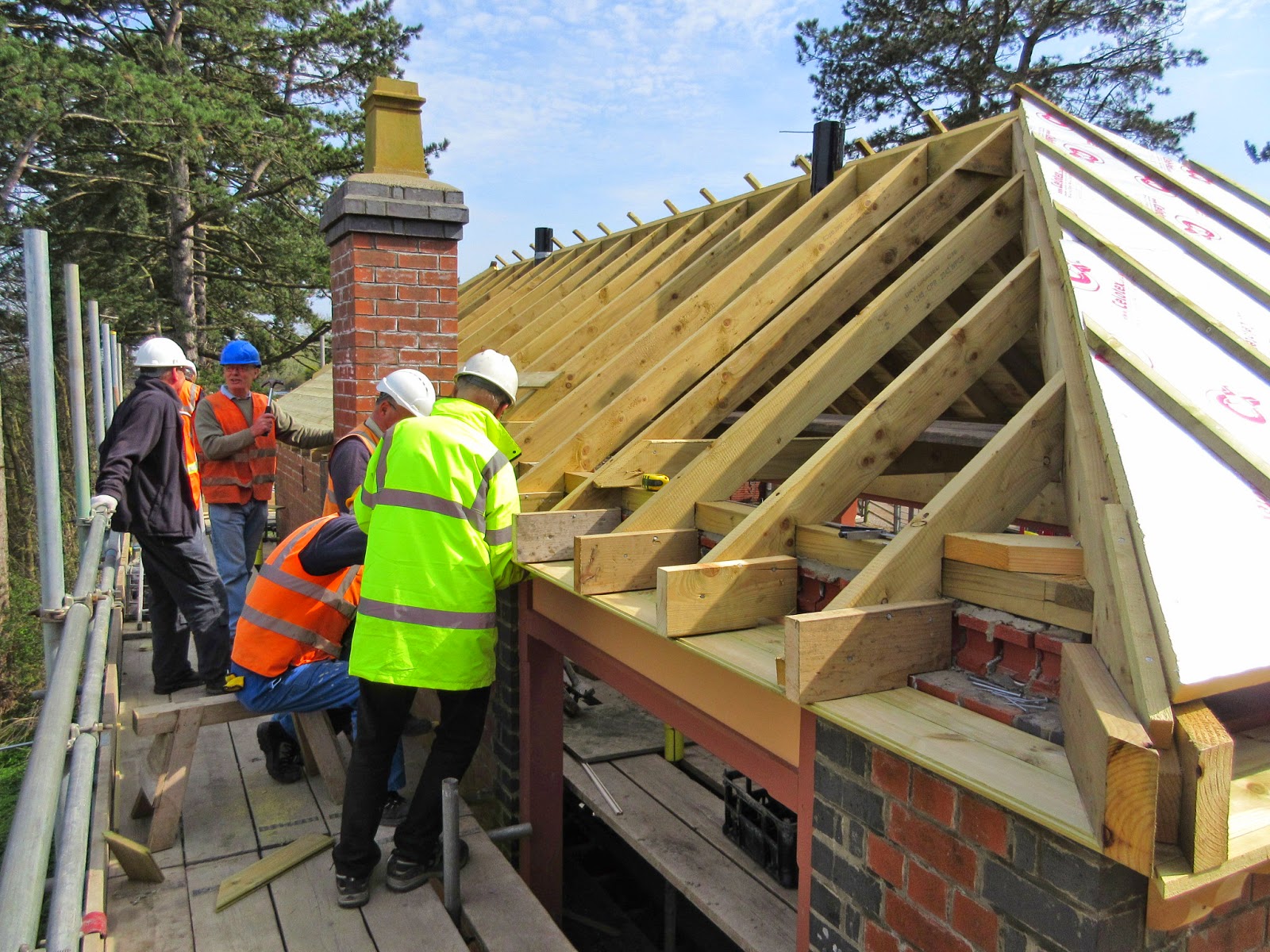 This photograph shows both teams at work, with the newly fitted rear soffits in the foreground. The new chimney and its pot, still in wet mortar, overlook the scene. Once the boards had been sawn to size, they had to be nailed on from underneath. So this was no wind up, nailing upside down! We really did it. The nails are oval in shape, and bend over easily, but after much patience the soffits are now all up. The fascia boards in front will be next. 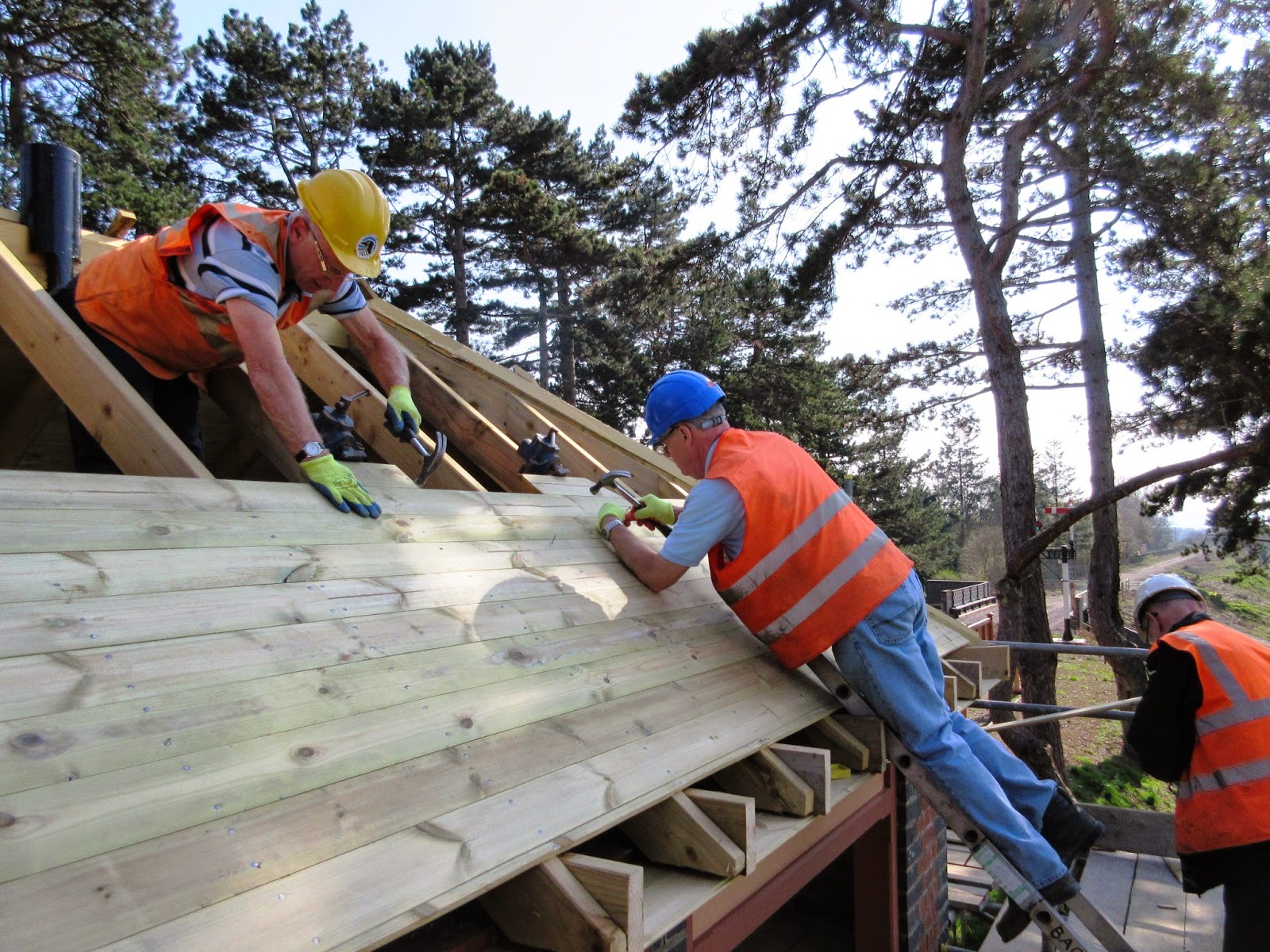 The boarding team got quite a long way, with 9 of the 21 rows fitted over the whole width of the back of the roof. One more day should see this through, then it's the final fitting of insulation sheets here.

We have to wait with the battens and felt until we know exactly what size the slates are.

Much activity also too place elsewhere on the station site. Vic, bolstered by the congratulations received for his flower bed, was seen tending to the flowers and spraying nettles on the drive, while Mike was painting the new electrical cupboards on 1c, as well as finishing off the new catch pit covers that he and Pete have made. The grass we have sown along the back of 1c is just starting to come through; this will look great.

Pete with the hoist came to fit further wiring to the telephone kiosk, which is turning into something of a sub station for plugs, lighting and camera controls.

Chris and David scoured the site for more debris to burn, while Clive tended a fire which gratefully received it. Brian came to cut more stumps down to size, but was hampered by a hot running chainsaw, which was probably damaged when the ash stump was removed from the catch pit rings last week.

Jim received representatives from a firm of shot blasters in order to configure a quote for the footbridge centre span. Over lunch he and Chris gave us an interesting lecture on the dangers of lead in old paint, and how to avoid them.

The work on the drains continued today; this is not a five minute job. A number of blockages were cleared using the corkscrew attachment on the rods, and the debris retrieved with the 'D' shaped scraper. The culprit turned out to be the crossbar from a telegraph pole! Hard to believe how this came to be underground in the middle of a 9 inch drain pipe. 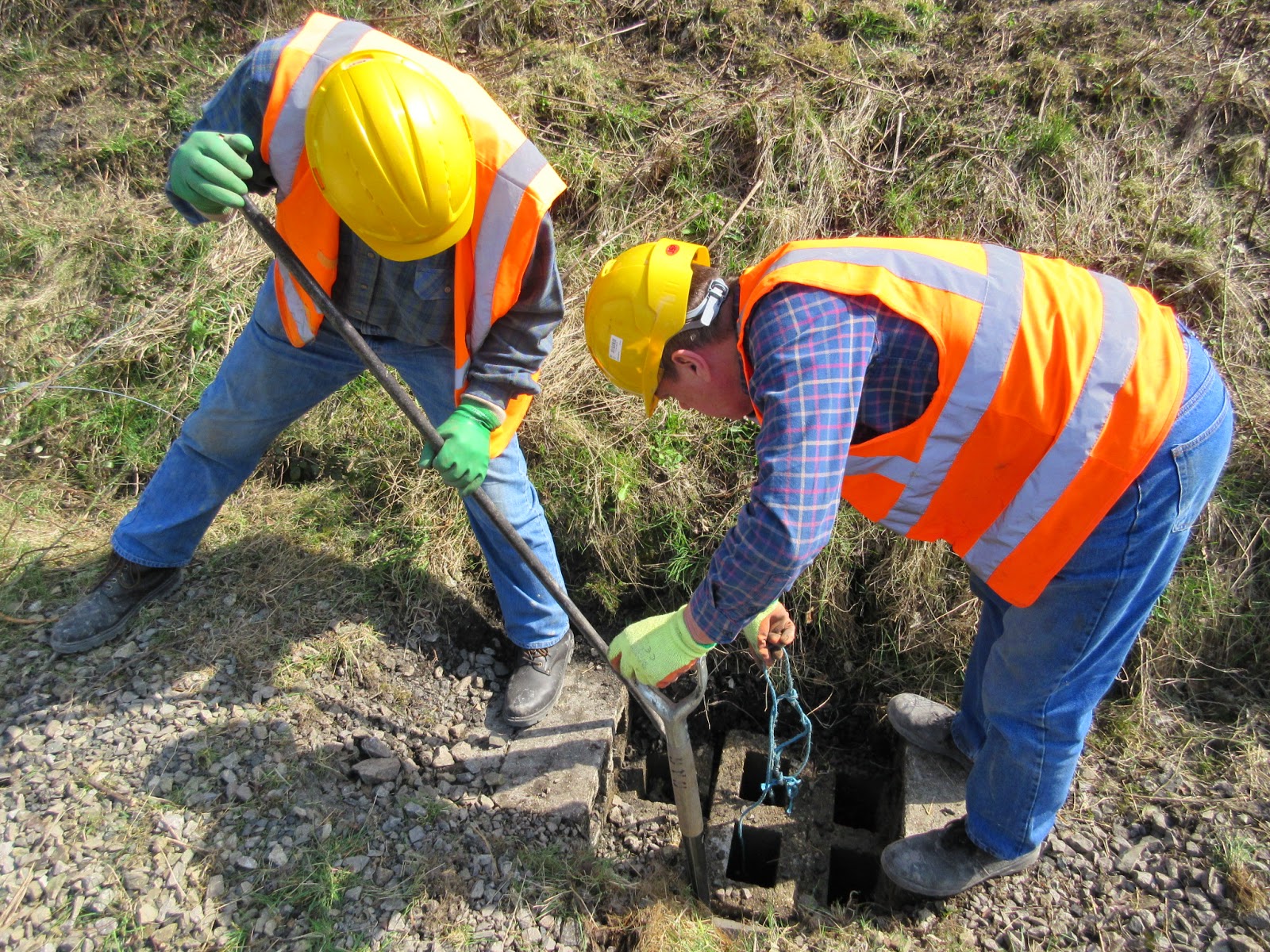 Some blockages were very persistent. What now? Rod and Terry are not easily beaten and here we see them in the first stages of digging out one such blockage, by lifting out the concrete blocks installed above the drain pipe. This was pretty hard work, but by means of this piece of rope and a bar they managed to lift out this first, rather reluctant block. 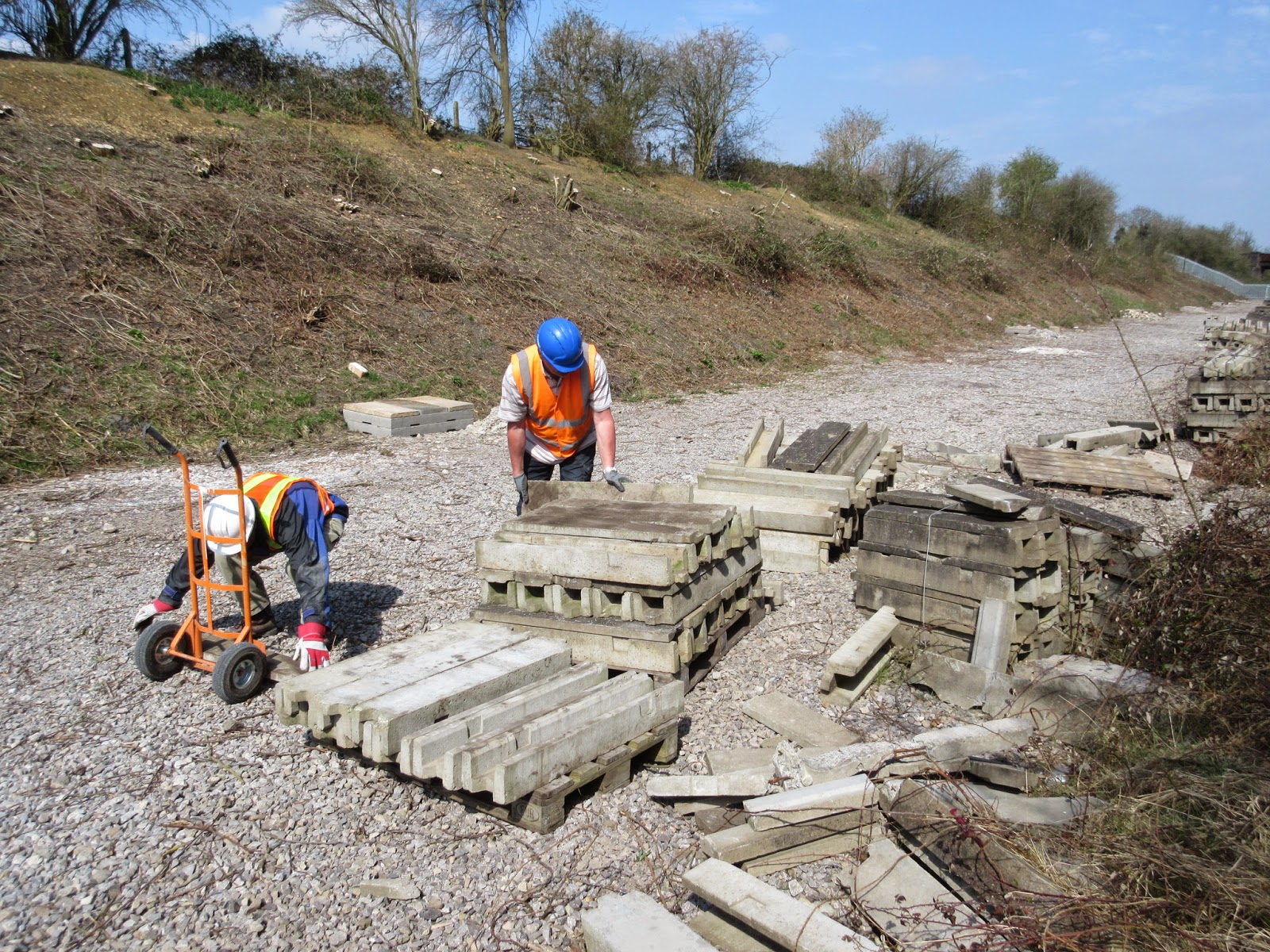 Meanwhile, Ron and Dave finished off the catch pits that had been successfully reconstructed and rodded through to the next. At Broadway we have a large pile of legacy signalling troughing which was stored here a number of years ago. Now finally we were able to make use of the lids, which we see here being stacked on a sack truck.. In the background you can see a completed and covered catch pit, with a brick above it denoting its number. 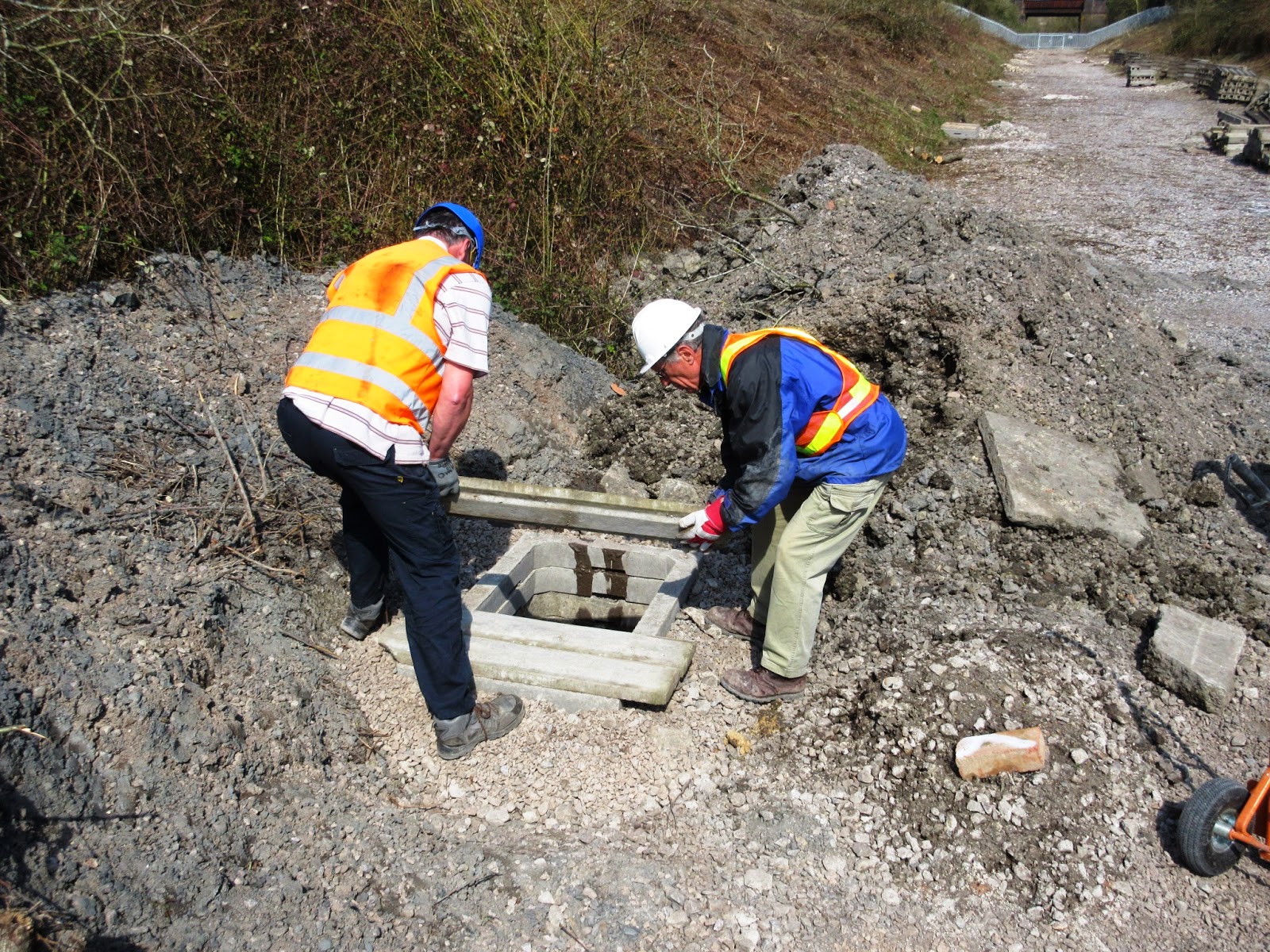 Here is one of the formerly buried catch pits, being fitted with lids from the troughing to make them safe and to prevent further ingress of ballast and other undesirables. 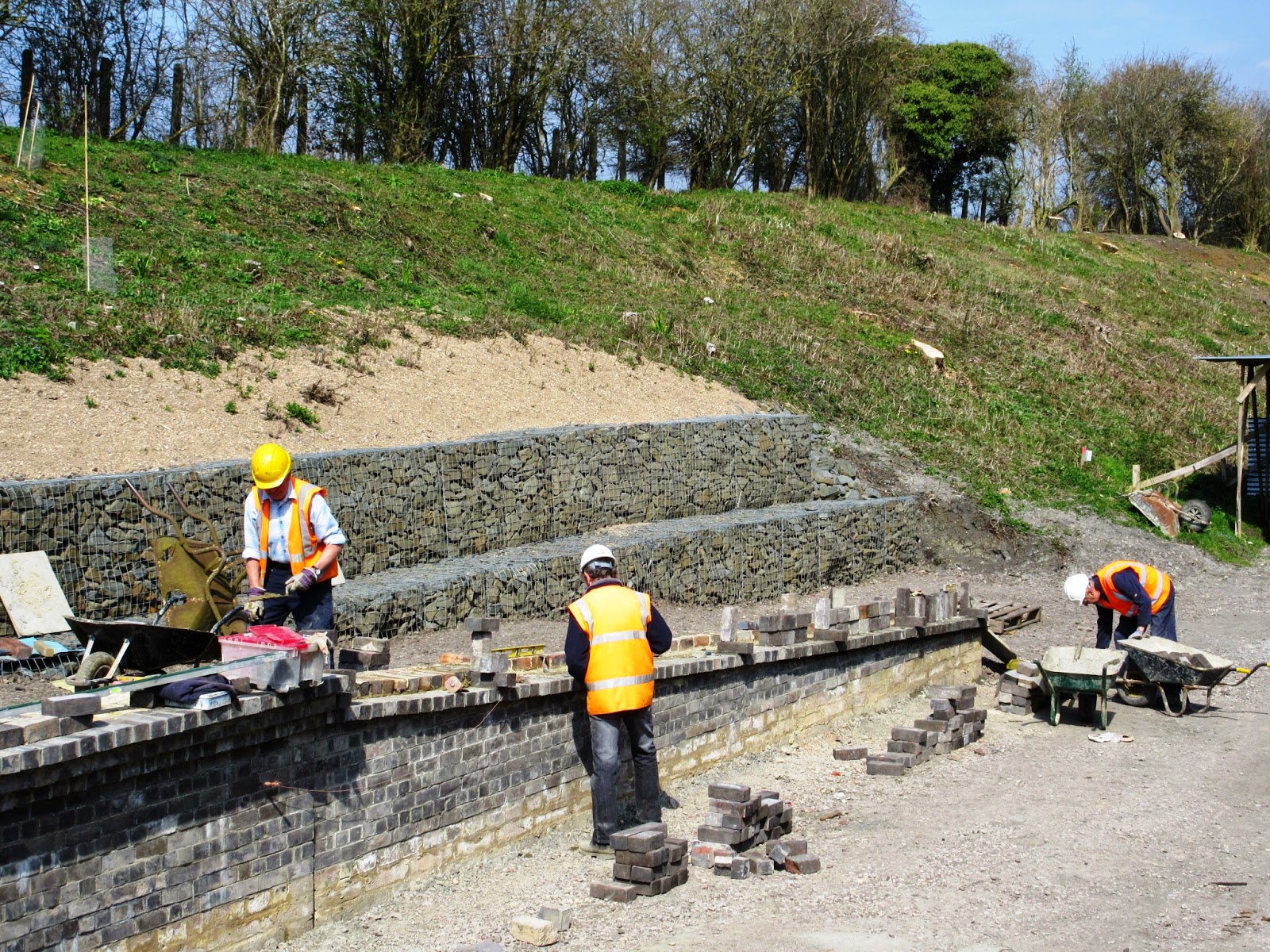 At the end of 2c there is still a remainder of brick laying to be done. The wall is now up, but the three rows of corbelling still need to go on to the final piece, being the slope down to the trackbed.
Here we see Roger B setting out the job, with individual bricks at intervals along a line. Platform side is Peter (another campanologist....) who is backing up the first row that Roger is laying. Finally we can see Keith on the right, who had the job of selecting the best quality bricks for the job. They all come from Avonmouth, and are thus of Midland origin. Oh ! We shall try to overlook that...

A quick note to say thank you for running this very detailed blog. I live in darkest Essex, from a Great Eastern family, but my in-laws live in Campden and I visit the GWR whenever I can. I first got in to the blogs following the Chicken Curve collapse and restoration, and the story of how Broadway is coming along is a real pleasure to follow. I’m really impressed by the determination of the team to do a proper job and am looking forward to my next visit. I shall definitely drop by Broadway to see the progress for myself.

Excellent photography. Picture wort a thousand. When is topping out ceremony for the S/box?

I believe that it may be during the May open evening.

Please give the date and tine of the May open evening. TKS.

I'm afraid I don't know the date for certain, maybe better to wait for an official announcement.

Hi guys, the chimney pot looks supurb, well done. I really like the fact its square, and the ribs in it make the whole stack look like its been their 100 years its so authentic. Is it a genuine GWR pot? If their is such a thing. I will be visiting the railway for the gala (a real may birthday treat for me every year) and was wondering if there would be a heritage bus service up from toddington to broadway in a lovely old bus, so enthusiasts could see the progress there? Would be cool if it was like the open evening, and you could get a real ale and hot dog, chat to the team, survey the progress firsthand, and spend some money in the stalls at the shed before the bus back to toddington...

What I can say is that the Broadway open evening is on Friday May 22nd.