Although several stalwarts were away on grandchildren duty, a respectable gang of 10 spread out across the site today, and got busy with several activities.

The day started a bit grim, with a steady drizzle and a northerly wind making things just that little bit unpleasant up on the box. John S and your blogger decided that the lee face of the box would be the warmest place to address, so we sheltered on the south side of the roof and cut insulation boards to size. 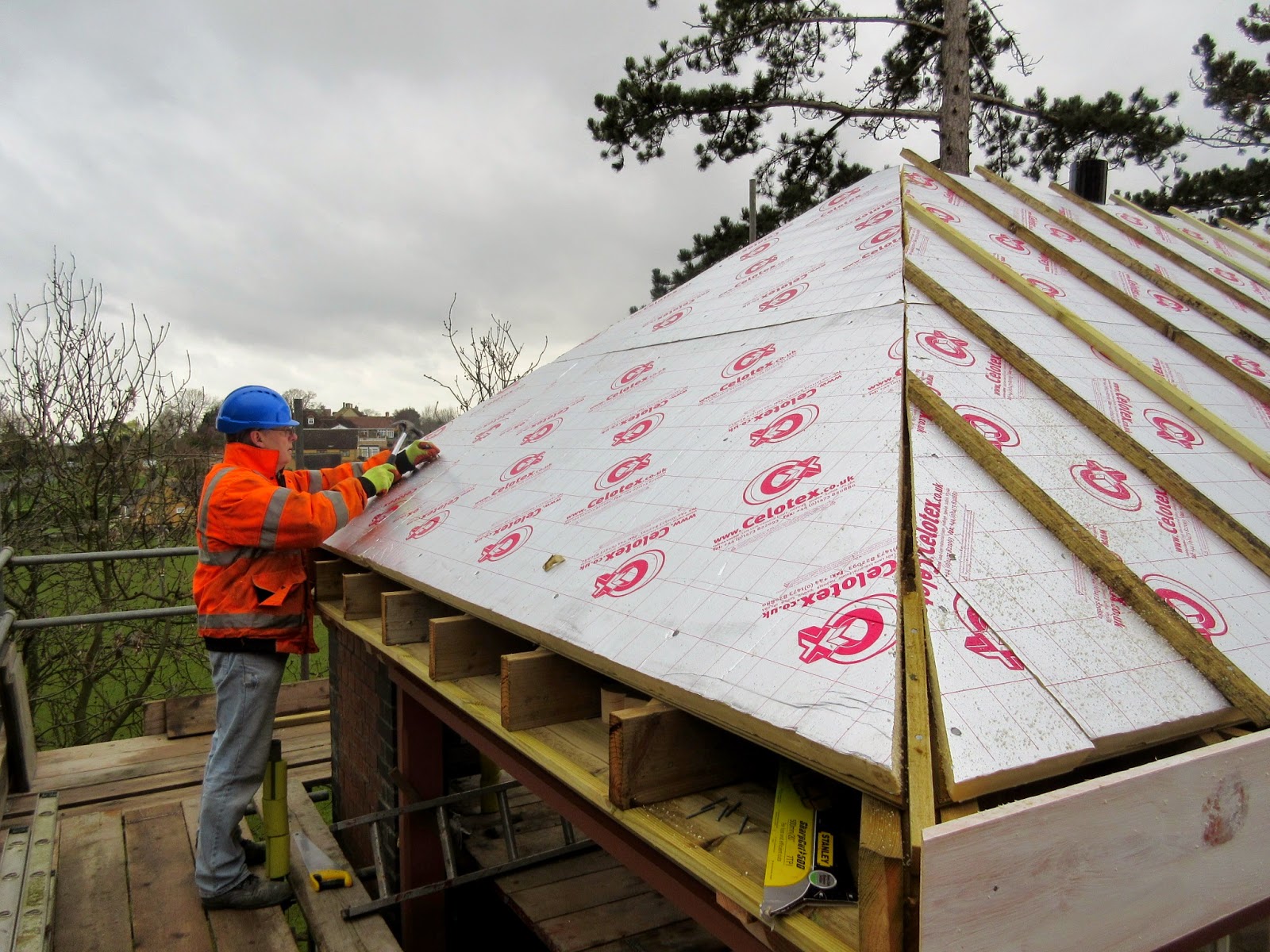 It didn't take very long, and we had this the second side of the roof covered and battened up. The aluminium faced boards are not exactly waterproof, but with these and the boarding underneath, less and less rain will be getting through now. The roofing felt is the next layer we think, and we have identified a source of acceptable slates. Believe it or not, this was a direct consequence of a potential volunteer speaking to us at the recruitment fair at Toddington! You never know how someone may turn out to be useful.

After a while Peter K dropped in and we quickly made use of him as a painter: 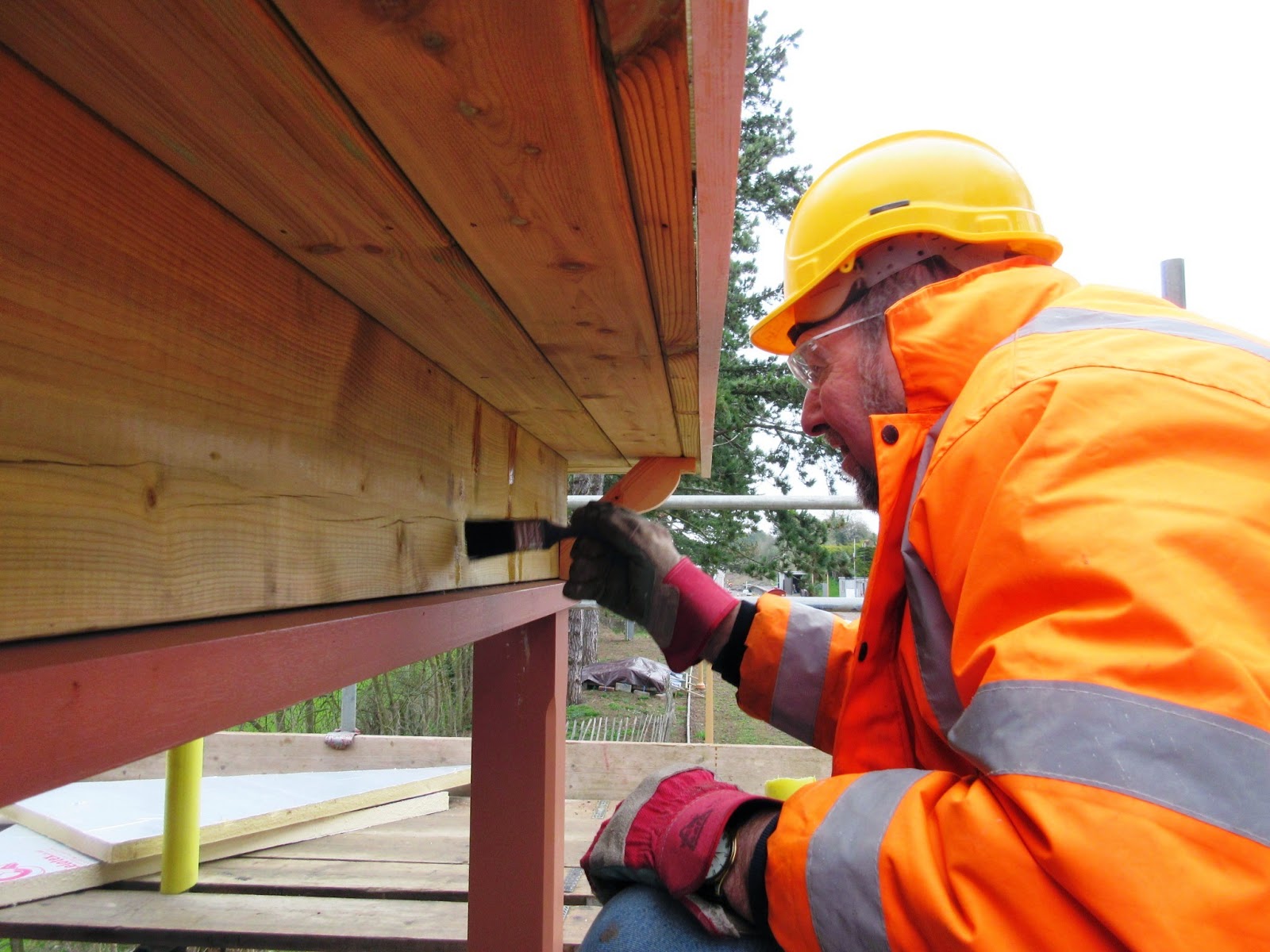 Here he is, putting a coat of knot sealant on the bressumer beam and soffit boards. You probably wouldn't notice whether the knots had been sealed from down on the platform, but that's how we are - we like to do a nice job.
Peter didn't stay long. He had a funeral to go to - we commiserated, but it turned out that he was only there to ring the bells. Bit of a campanologist mafia, up there on the box - John S is a ringer too, and even yours truly had a go at the sally in his teenage years. 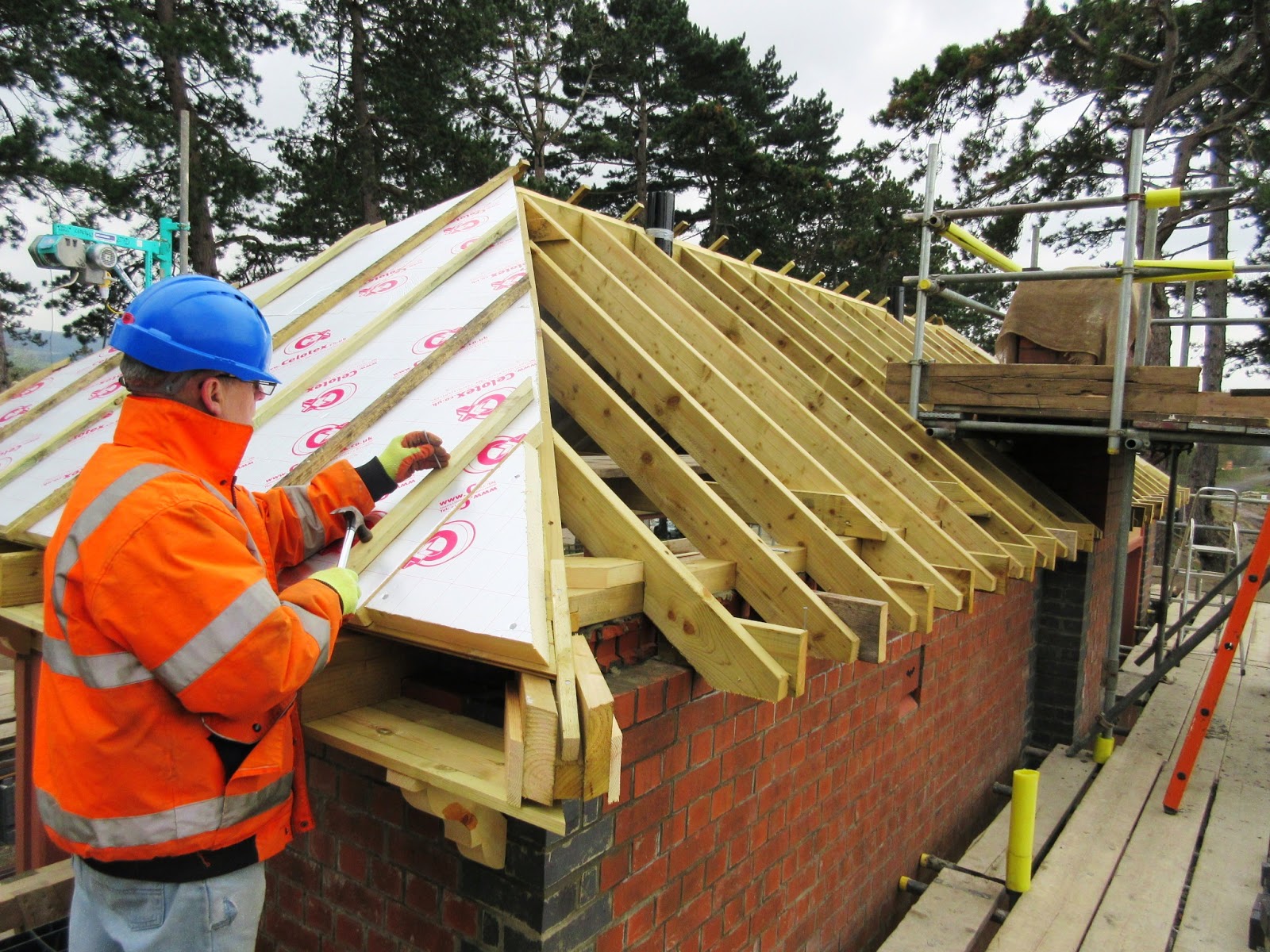 As it continued to drizzle, we wisely decided that this would be a good moment for a brew.When we came out again it was dry - exactly as per plan - and we attacked the northern side of the roof. From down by the viewing platform, it now looks as if the roof is all covered up, but as you can see the rear is still quite open. This is because we have to wait with this part of the T & G boards until the scaffolding is down again. That should be possible after Wednesday, when the chimney pot is due to go on. 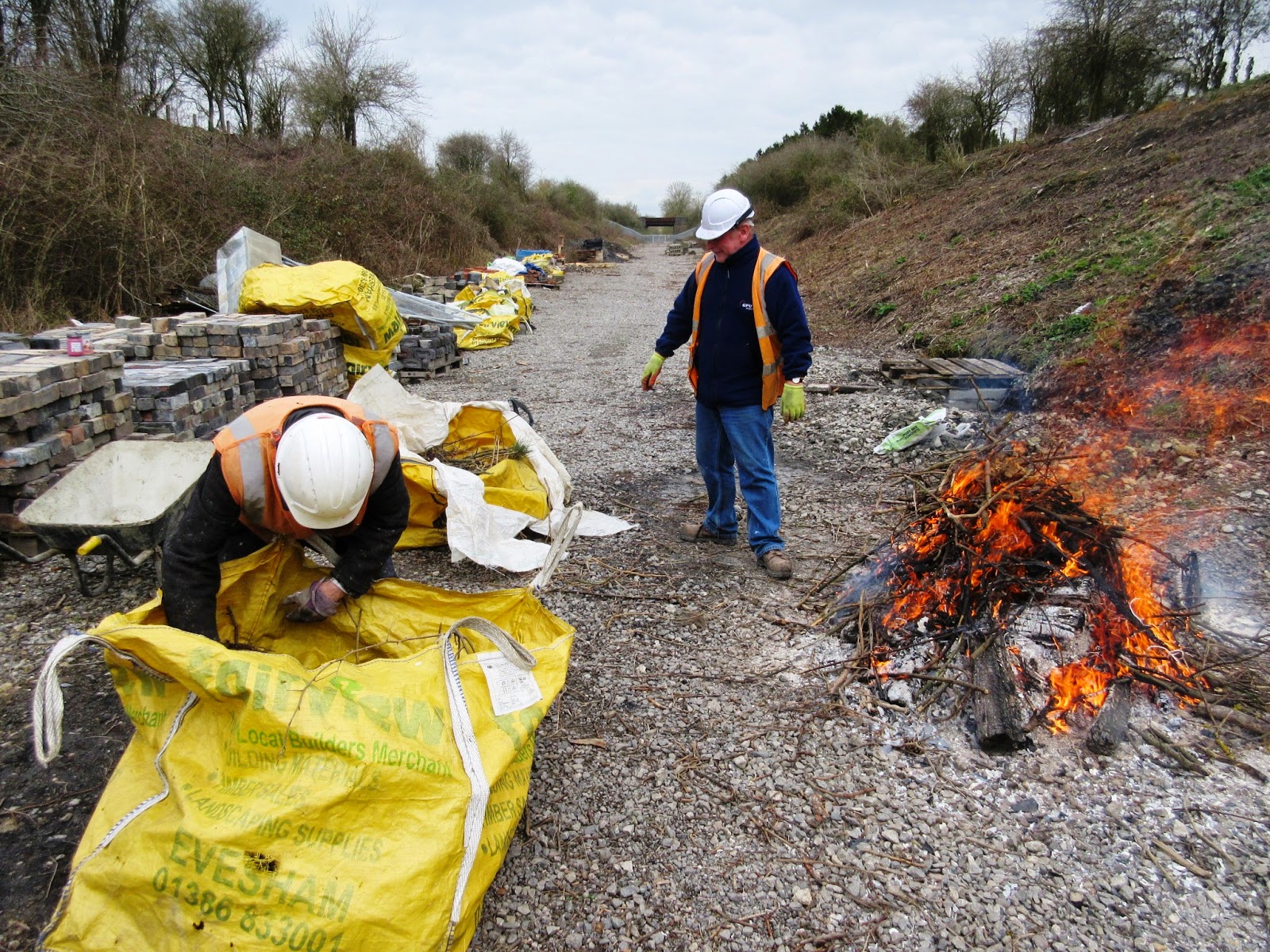 Further up the site a jolly fire blazed, and Clive was seen scurrying about the site with a wheelbarrow, looking for stuff to tidy up and burn. Mostly this was dead ivy, blown off the trees by recent high winds. 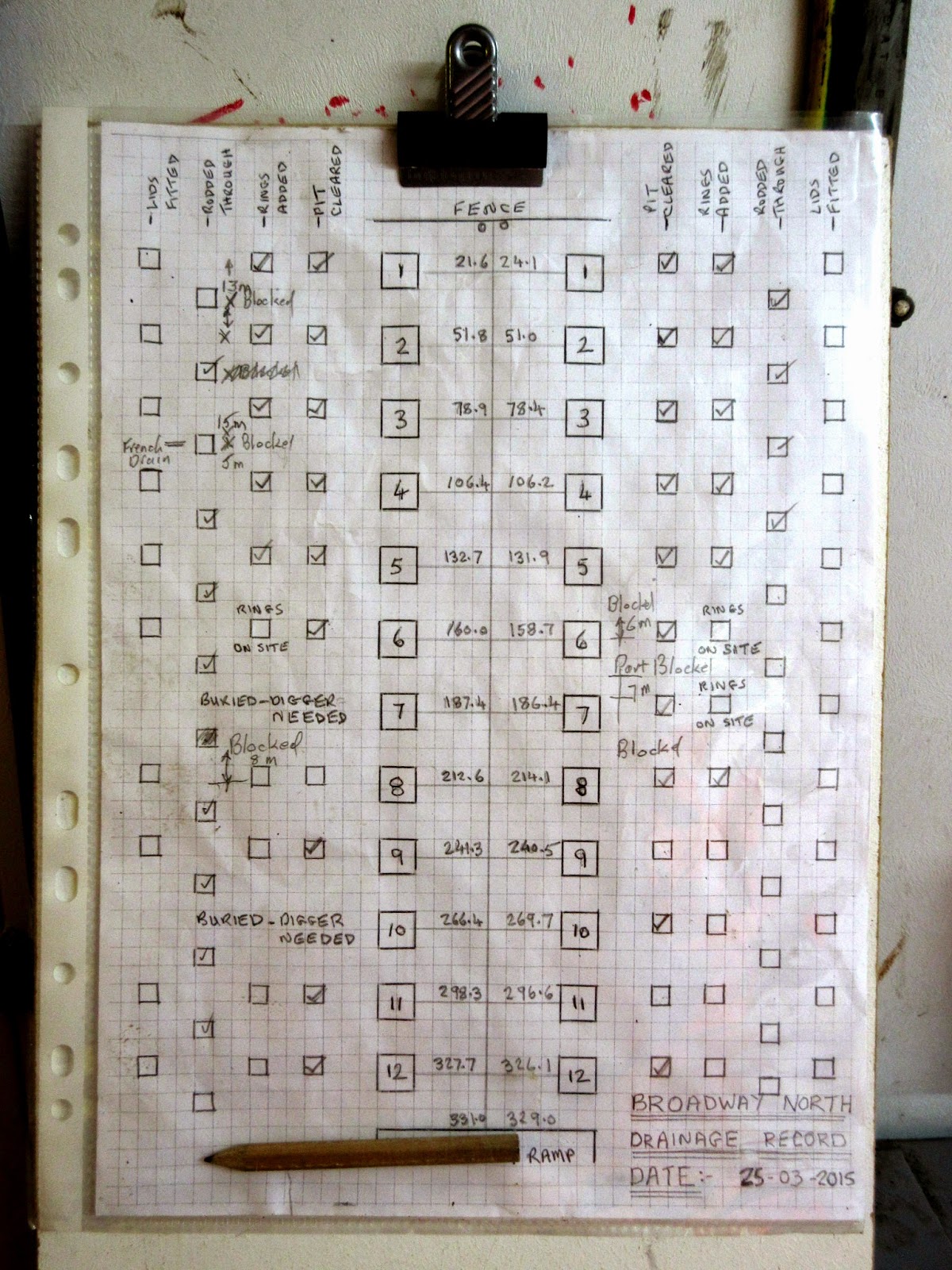 In the last post we mentioned a list of catch pits at the northern end. Here is a picture of it that you might find interesting. All the pits north of the platforms, up to Springfield lane bridge, are listed with their condition, and any blockages noted. A pencil is included for updates ! Methodical, aren't we.

Today Rod and Ron carried on with the catch pits. What a lot of work that has been. Filled in, wrecked by diggers, trees growing up out of them, even completely buried. But we are dealing with them one by one. Andy P brought round a large supply of new ring segments, and with these the pits were reconstructed and also raised, so that they no longer self fill with ballast and other stuff that gets pushed around the site. Although some are reputed to be blocked, it did appear to yours truly that the water was flowing between at least a number of them, which is very satisfying. 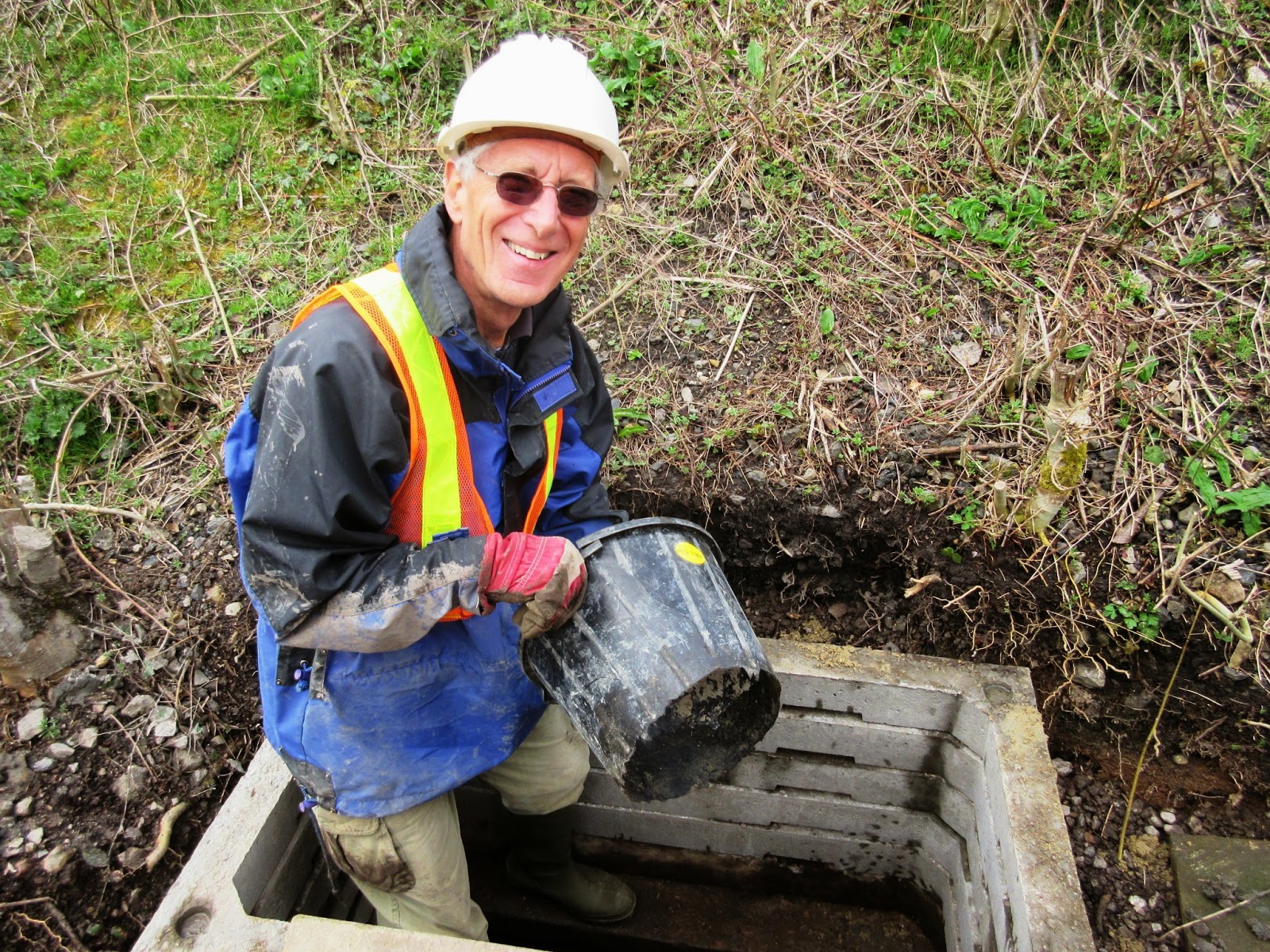 Now, looking at Ron's bucket you would say, Dear Ron, you won't scoop much water out with that ! But this bottomless bucket was part of a cunning plan to mend a broken pipe end at the bottom of it - it made a perfect mould. Neat ! 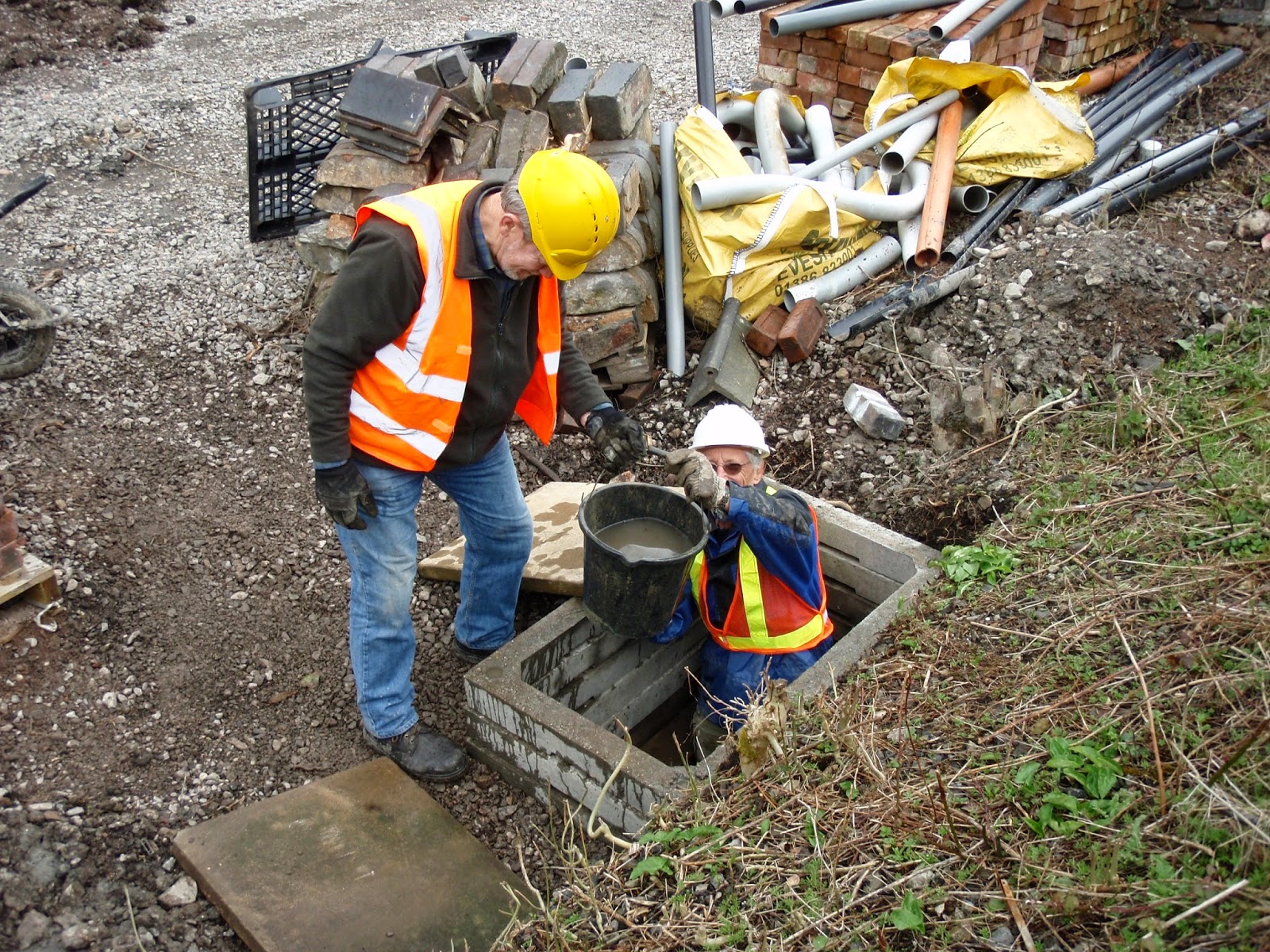 Here's the proper way to use a bucket. Ron was in his wellies, and a lot of water was removed like this - it was all over the trackbed! Feels like a lot of effort went into that. 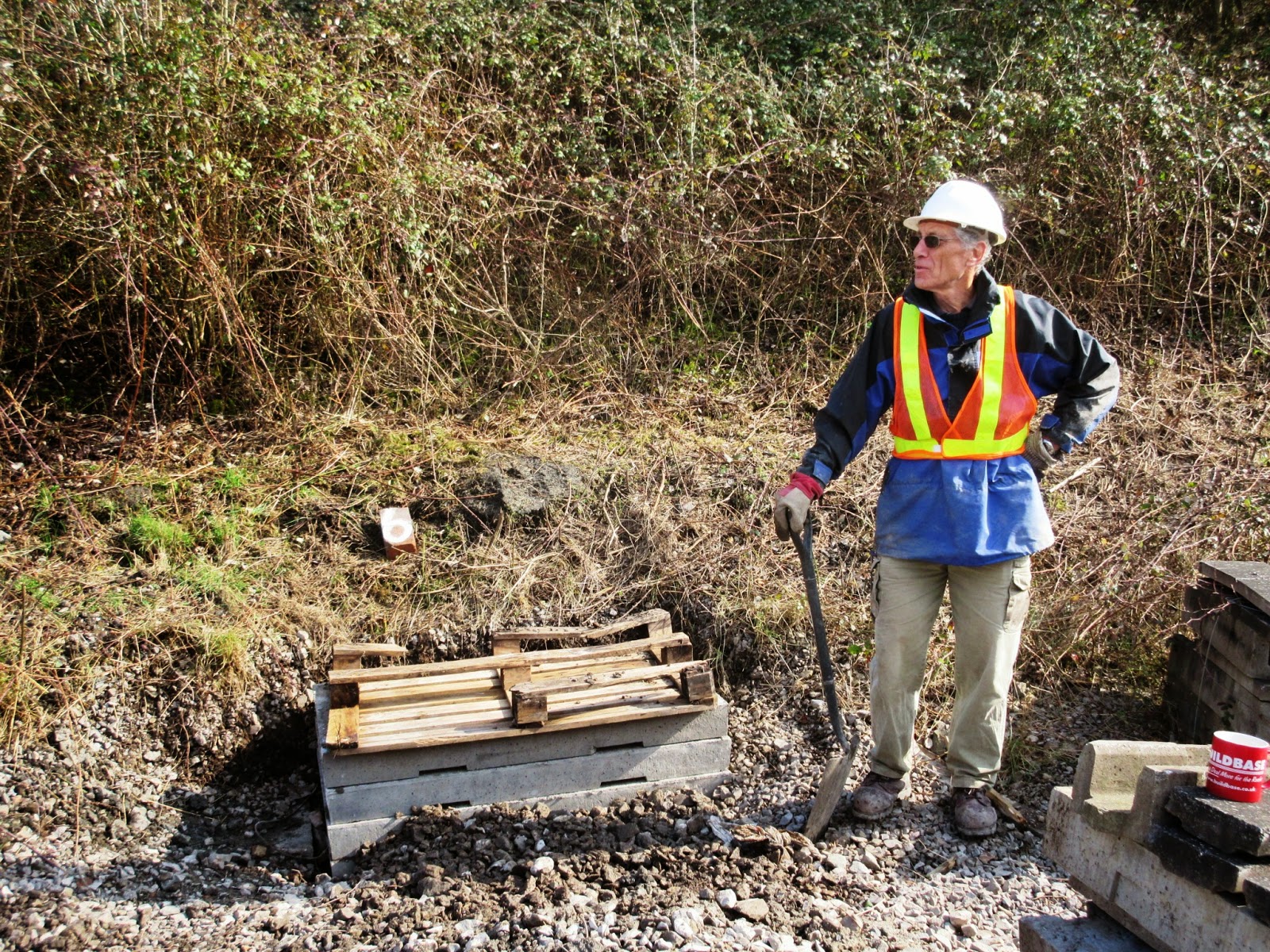 At the end of the day, Ron has back filled his hole, and ponders how far the railway will go - will we get to Honeybourne? Stratford perhaps? 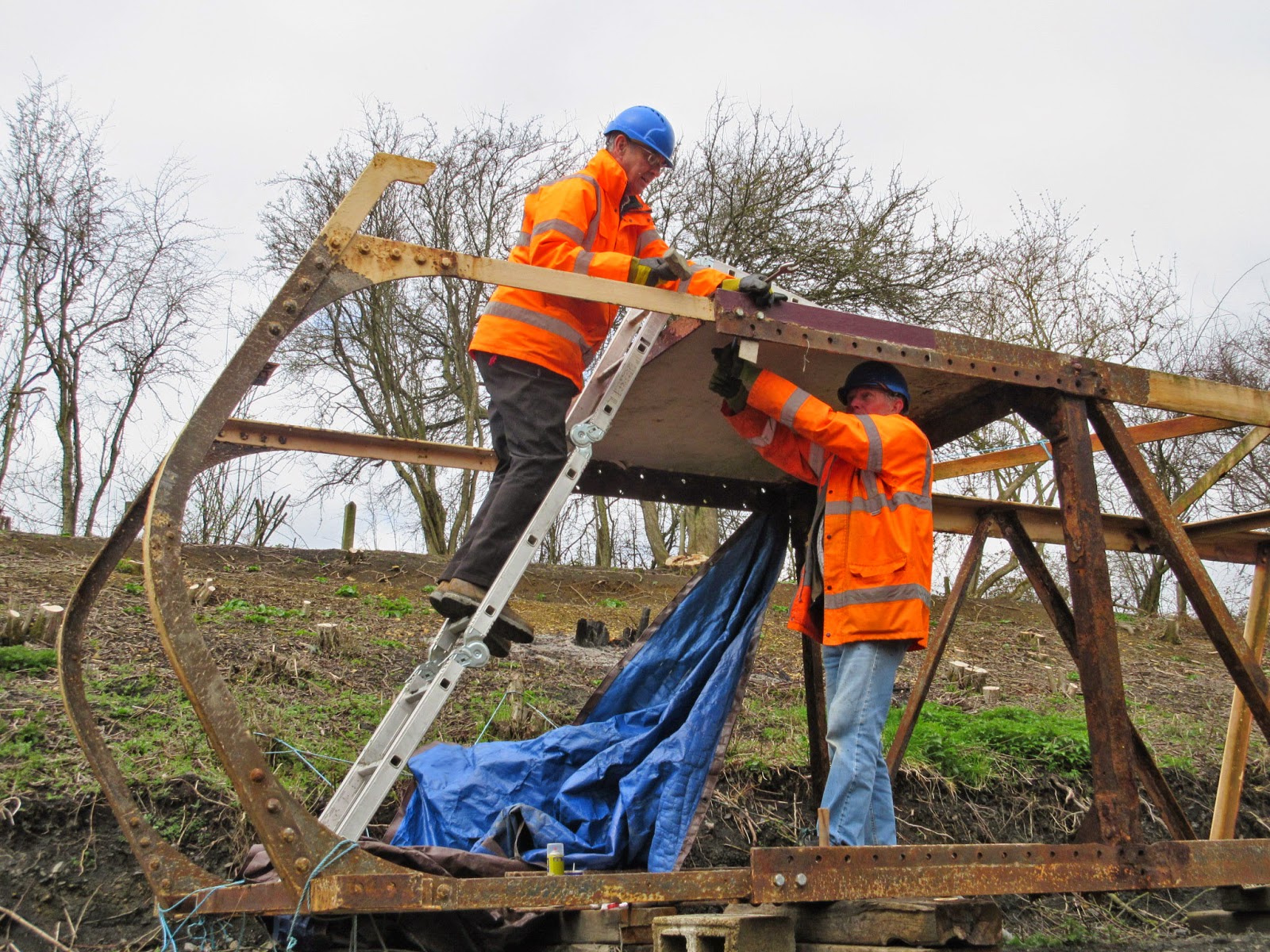 Work also proceeded on the footbridge towers. Here are Jim and Roger with a set of large spanners, taking out the old bolts that hold the hoops on. The plan is to save the hoops, but have the very moth eaten and gas axed towers replaced by new.

Meetings are being held with shot blasters and fabricators to get good quotes for the repair work.

We are still waiting for the steps to arrive. 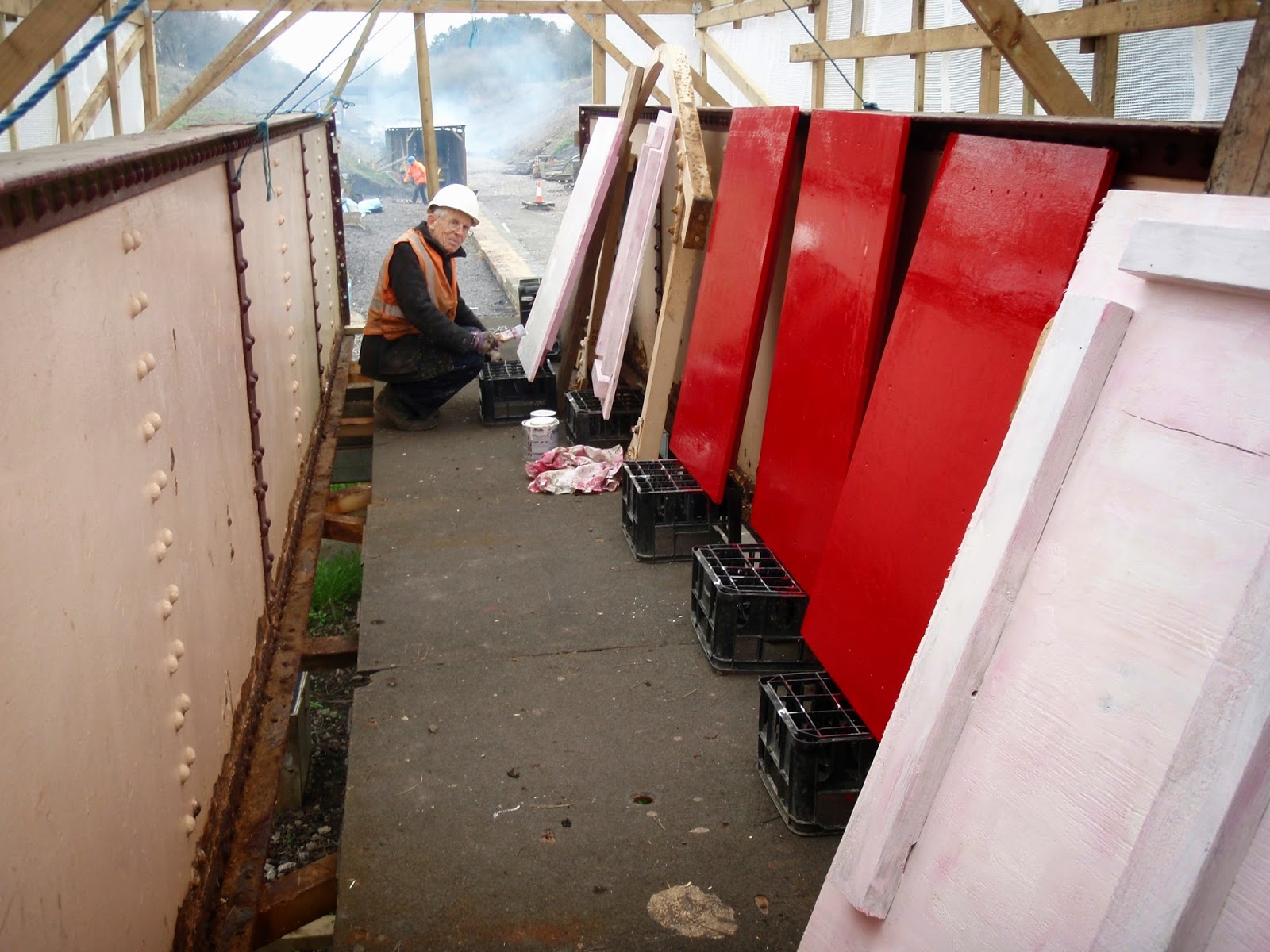 Making good use of the shelter over the centre span is Robin. Here we see him painting the new covers for the centre drain catch pits. Mike has manufactured these. The 'old' ones - only about 2 years old in fact - have been repeatedly run over by visiting vehicles, and recently twice in the same week! Culprits were the lorry and trailer delivering the blocks for the new station building, and then again by the van servicing our portaloo - the normal driver, who knows us well, being on holiday. Now the replacement driver knows us too.... 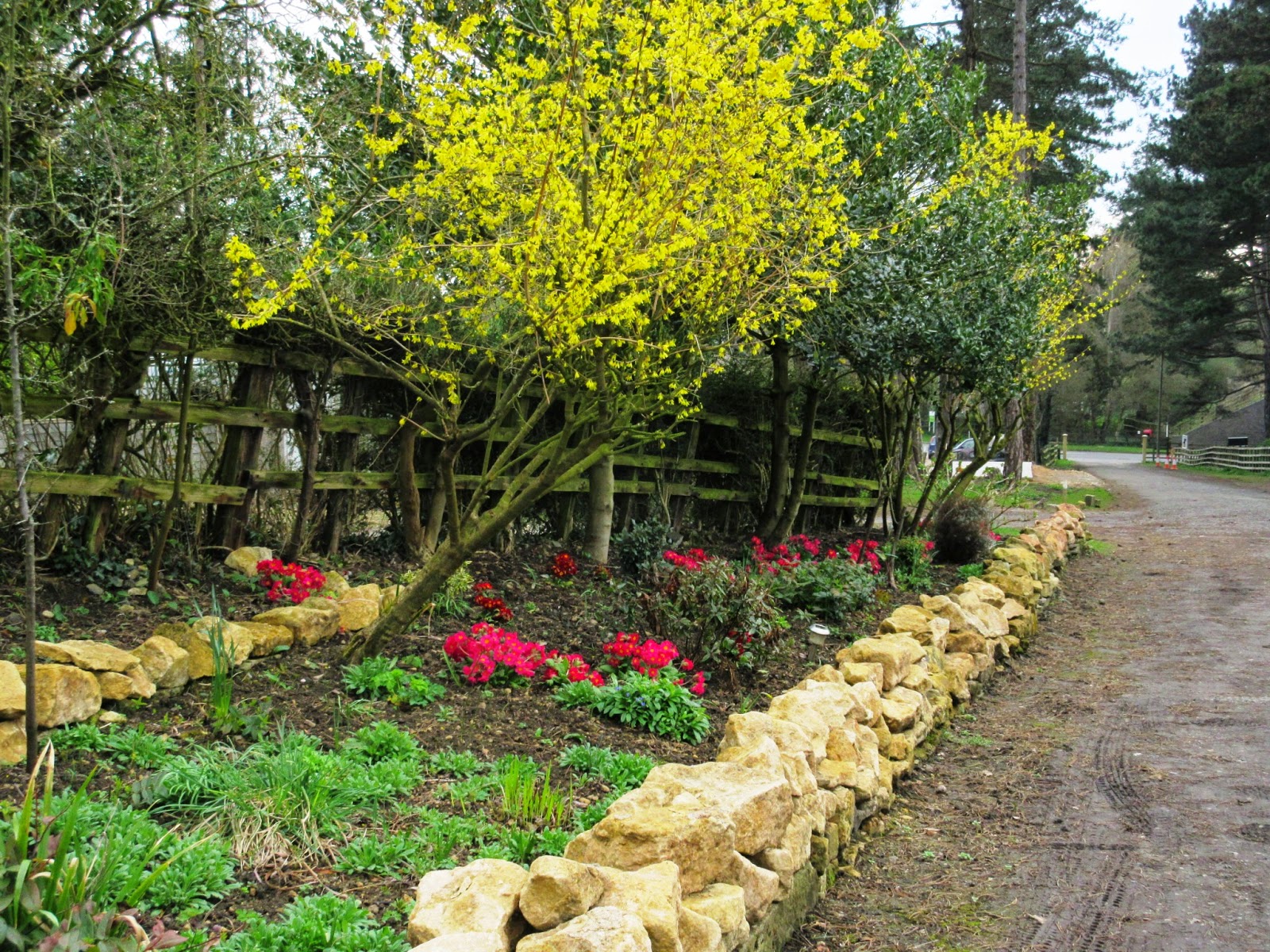 Not so exciting as say the signal box, OK, but we would just like to show you the result of Vic's tireless behind the scenes efforts on the flower bed opposite the station site. This used to be a mass of brambles and ivy, full of discarded lager cans. Now look at it! A mass of flowers, framed by Cotswold stone. Excellent work, Vic ! 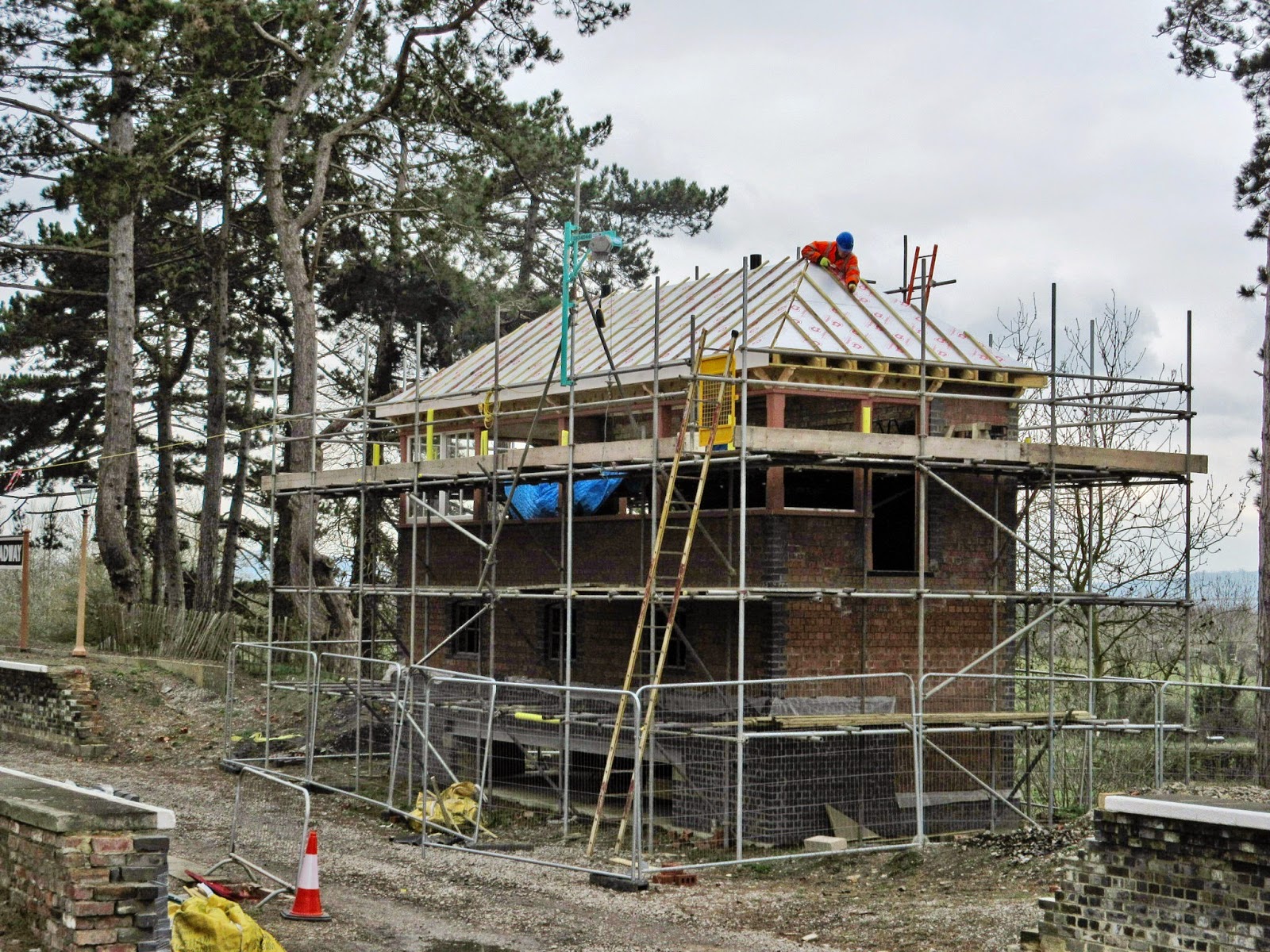 Finally, a last look at the box.  This picture, taken around lunch time, shows John S right at the top, hammering the last nails into the battens holding down the new insulation boards. The roof almost looks finished - that's why we posted the picture of the big hole in the back. Some way to go on the roof yet, but we are making steady progress.

Happy Easter to all our readers - hope you find a big Easter egg at the bottom of your bed tomorrow morning :-)
Posted by Jo at 19:52

Are drains -1, -2, -3 etc needing to be done on the Sustrans side so that those on our side work properly?

The series of side drains and catch pits carries on quite a long way towards Willersey, emptying finally into a brook. Many (most?) of these pits are full of rubbish.
How we deal with a neighbour's drains I don't know, but at least the water - at the moment - doesn't seem to be stacking up on our side.
I'm sure we will be having a dialogue.

First drain inspection video is at:

Key points being that the pipes look in good condition but the camera got stuck at 14 mtrs on a ridge of limescale. There is evidence of limescale build up and root incursion but there is a path for water to get through. It will be interesting to see what impact the rodding has had on the visible deposits.

Noise in the background is the mini digger and the chainsaw that were operating on the vicinity when we did the recording.