Big progress on the signal box roof today! Six volunteers worked up there today, out of  22 on site. In our last episode we saw how the first two rafters were erected, and today more progress was made, with the skeleton of the roof almost completed by the end of the day. 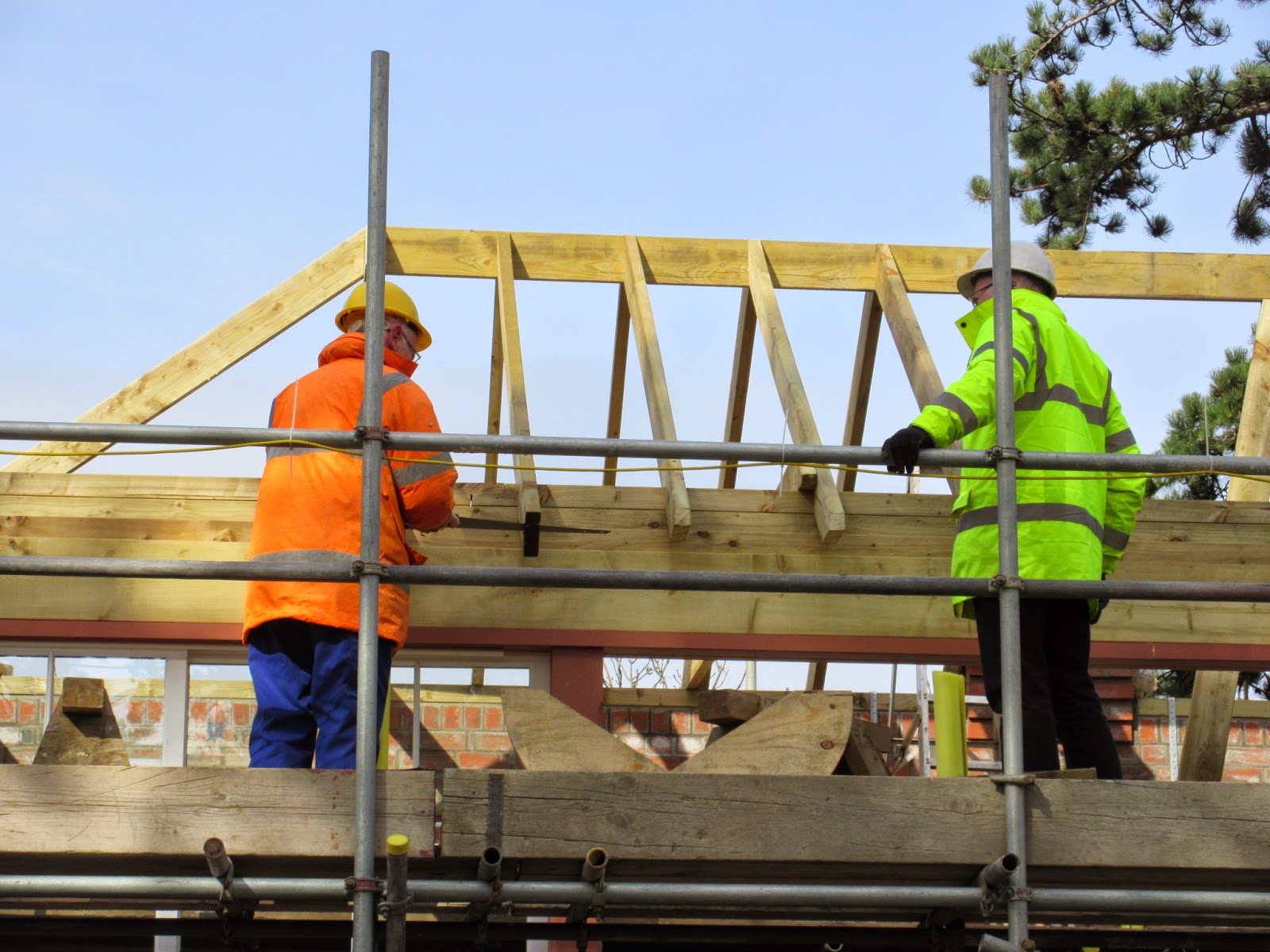 In our first picture, zoomed in from platform 1, we see Tony and Pete working on the southern end of the roof, with new rafters visible behind. A question was asked about the cast iron ventilator tubes, as they will be fitted soon. These are ready for fitting to the horizontal beam at the top, around which they are clamped. They are originals from Exminster box, so part of it lives on here. 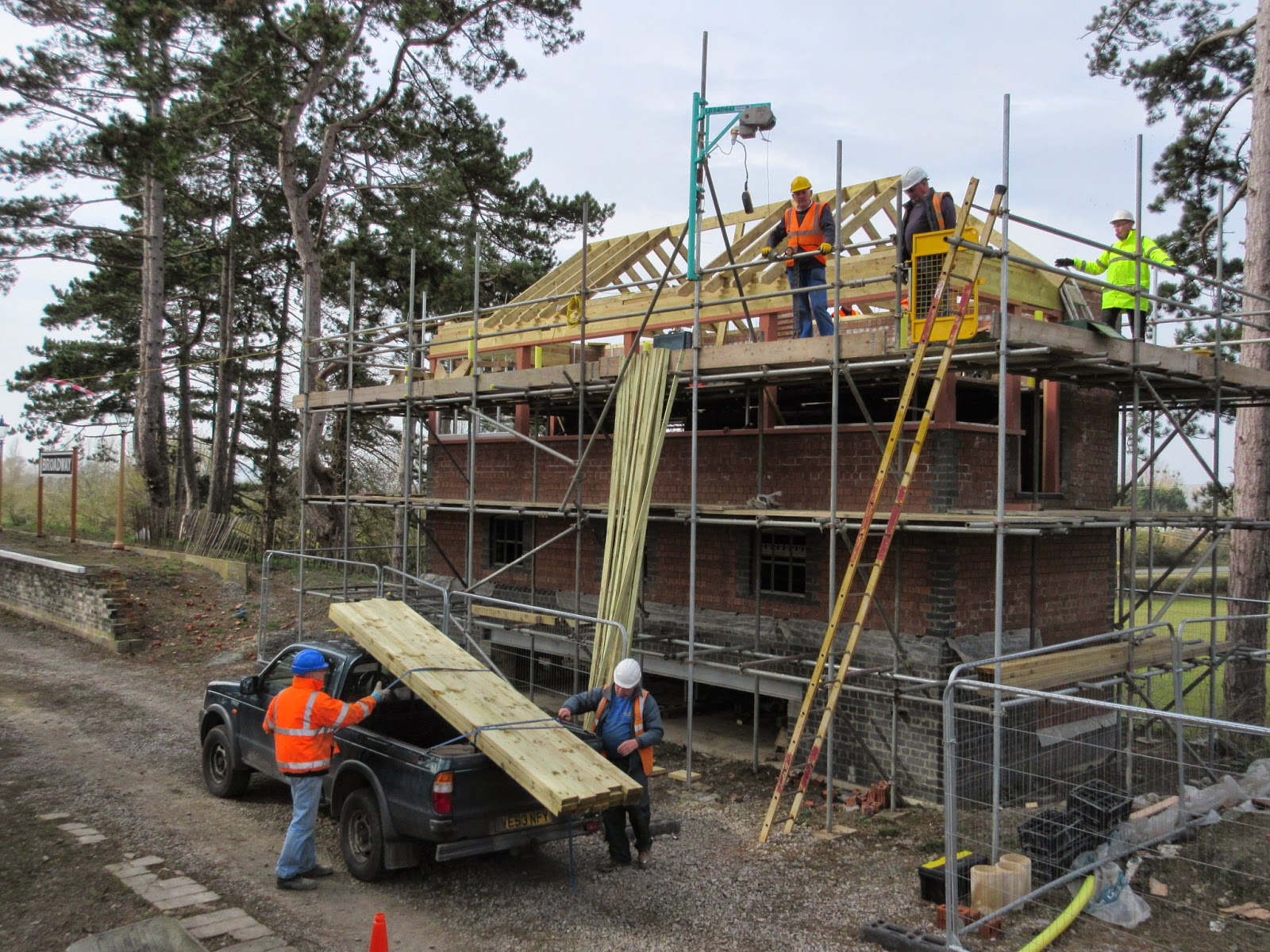 Early in the morning JC and John S went up to the sawmill and got further supplies of wood for the rafters. Pete, Bob and Pete look down expectantly. These timbers were soon stacked up on the scaffolding, and roof construction resumed. 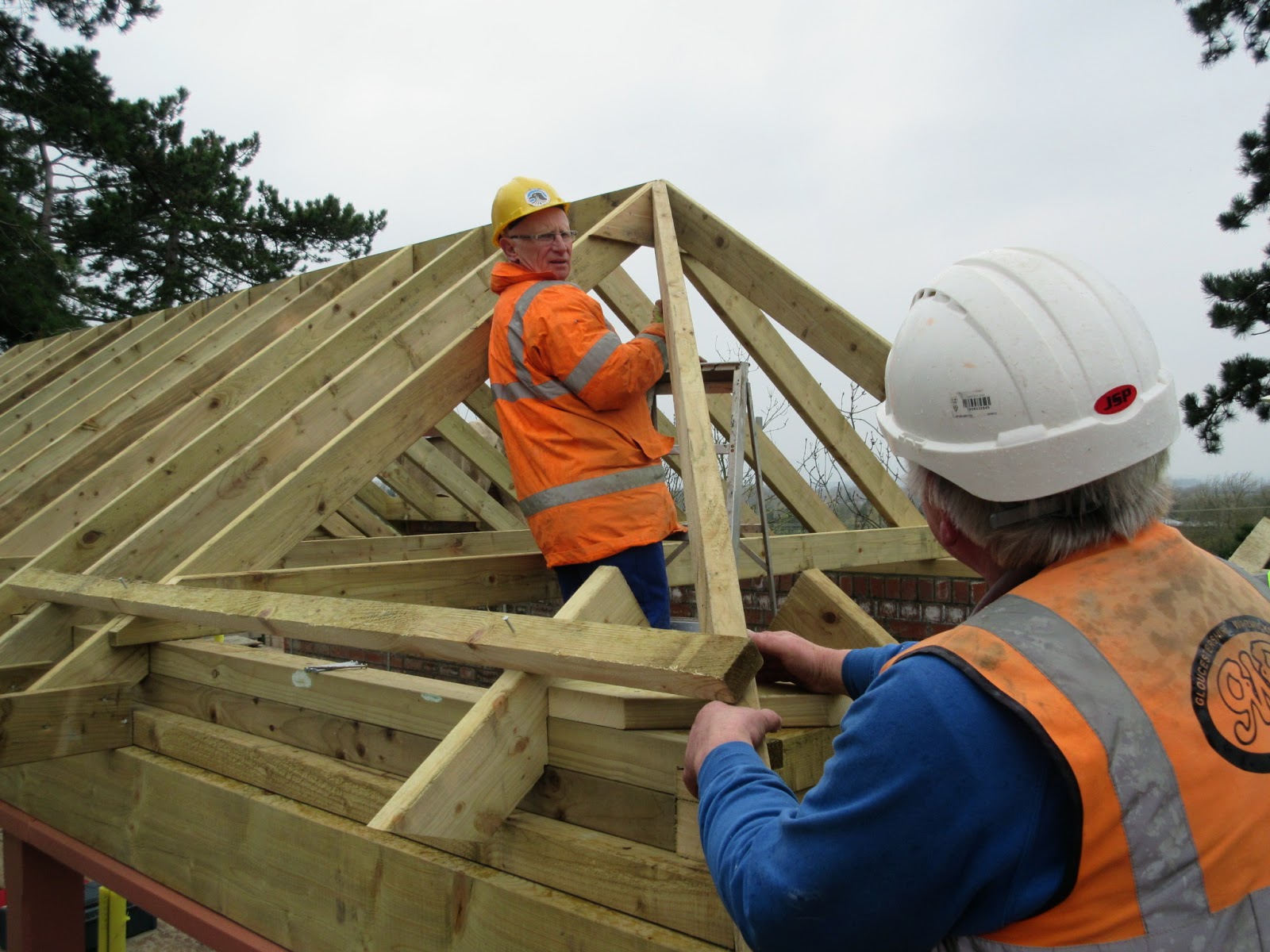 In this picture JC is fitting one of the hips, with Tony at the top checking the angle at which it was cut, to make sure it met the top without undue gaps. 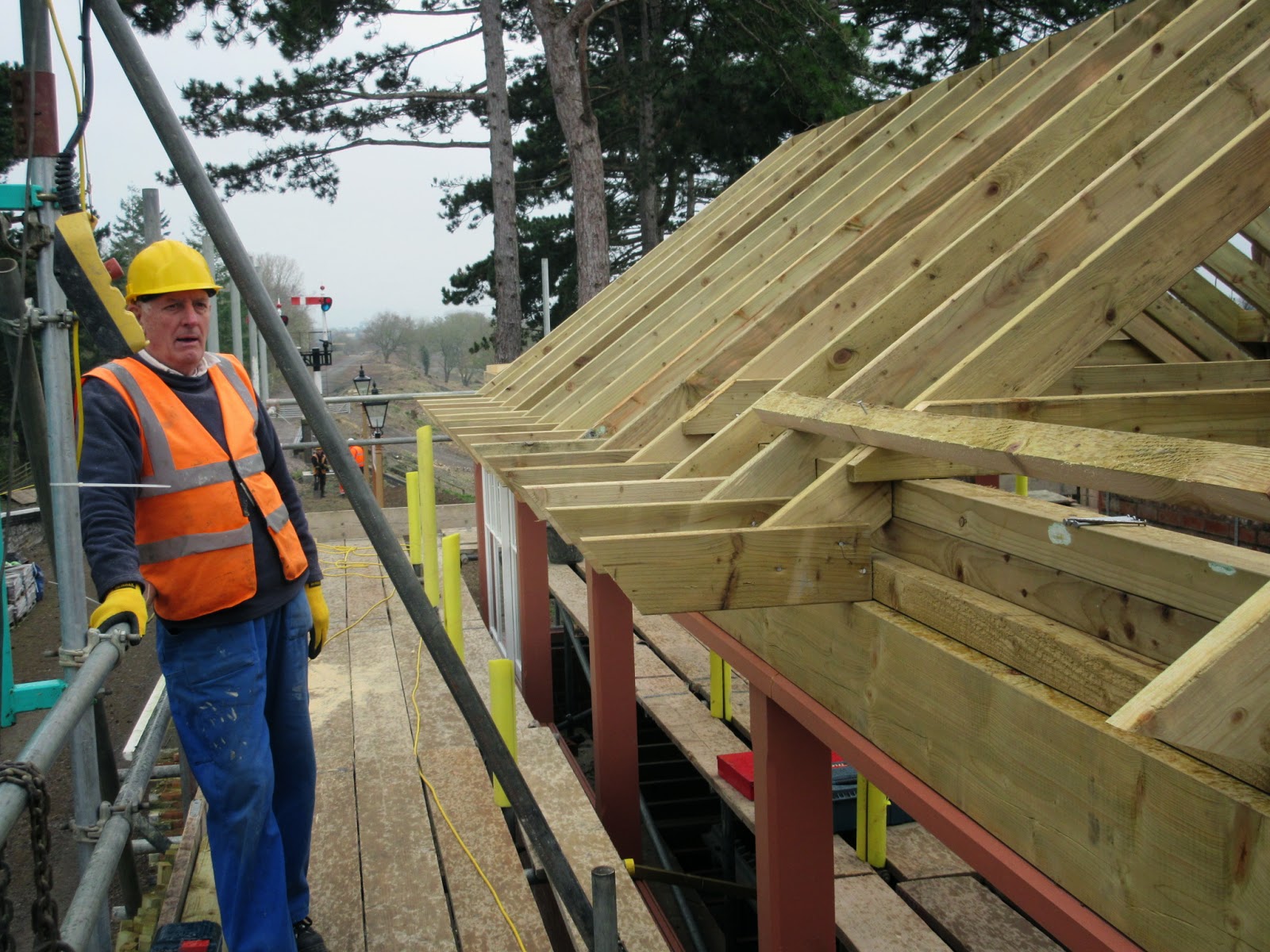 Further to the left of the above picture is Peter Q, who has been busy fitting noggins.

I checked the use of this term carefully, as I sensed a wind-up.... my wind up radar was in overdrive here. It needs to be, as you have to be careful at Broadway. But it is true, these little bits of timber sticking out are indeed noggins, used to provide a strong fixing for something that will be later fixed to the structure.

That something is the fascia to the front, and the soffit underneath. Broadway signal box will have a hipped roof, which is very decorative (and historically accurate) 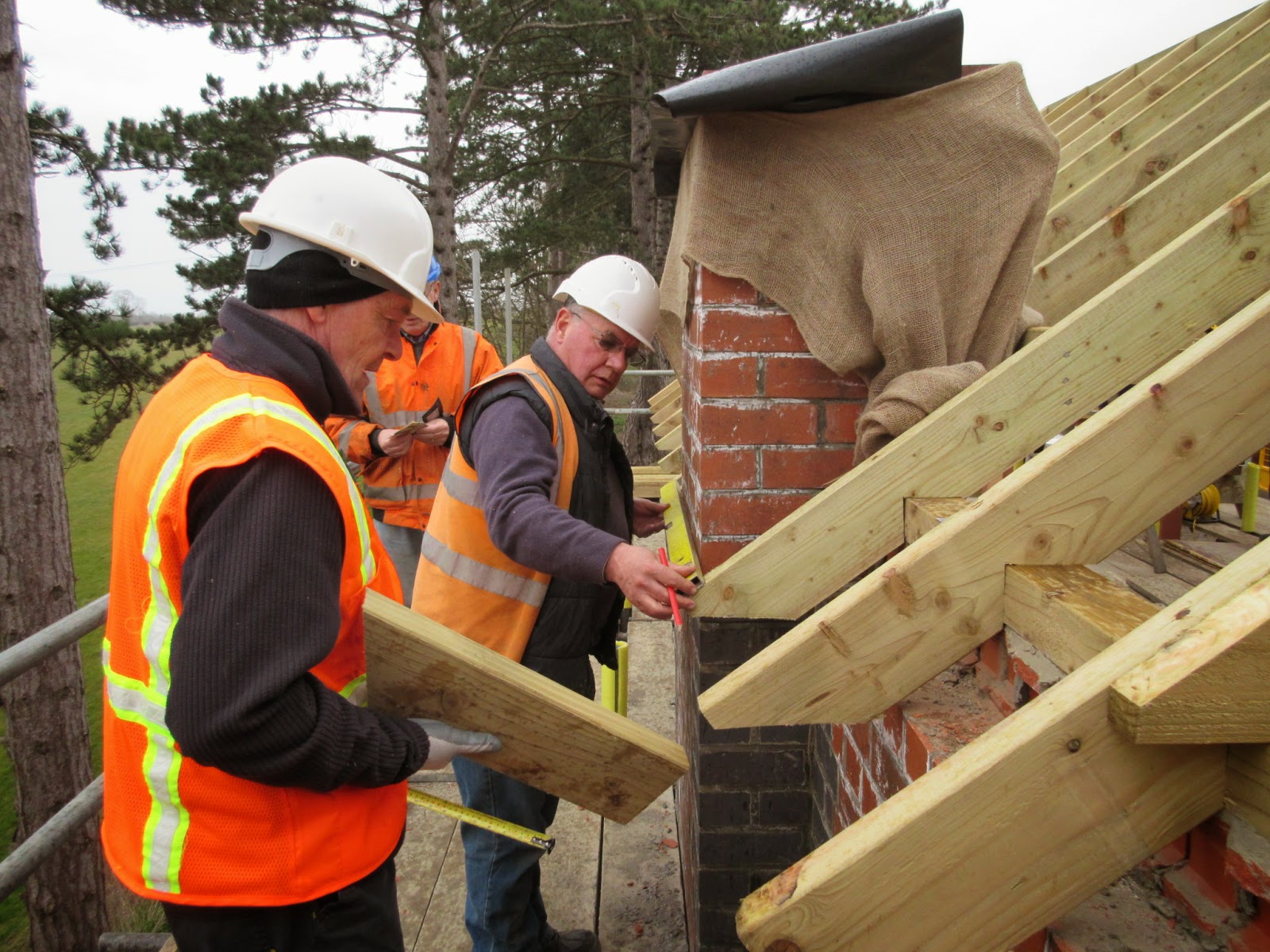 Here's a shot of activity at the back, where Paul is holding one of the noggins, and Bob is measuring up how the roof fits round the chimney. 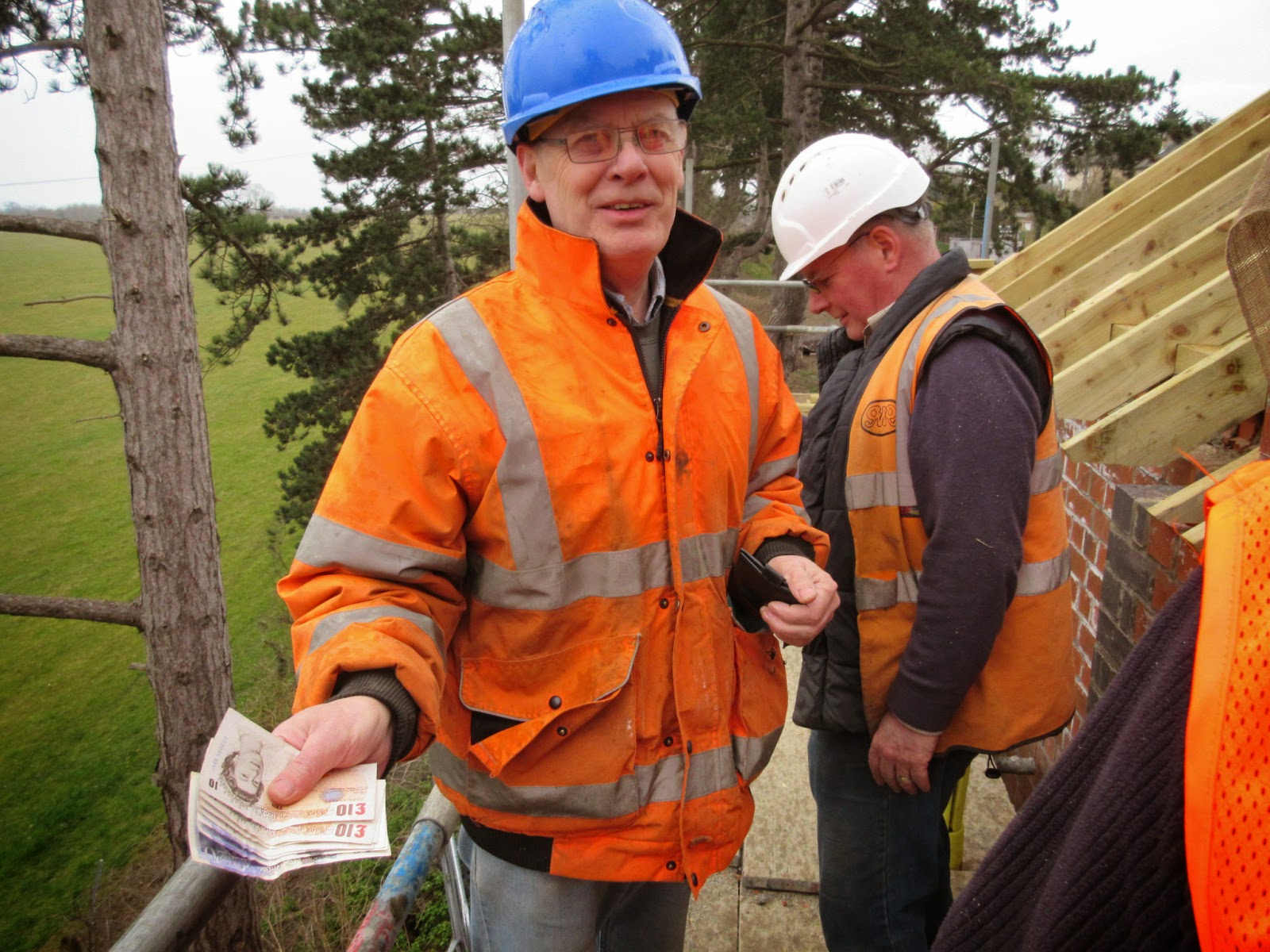 The blogger's life is financially a very comfortable one.

The written word is very powerful, and many people freely offer inducements to keep the blogger in a friendly frame of mind, and for him to report only on the good things that they did.

My holiday to Torremolinos is now booked.


Moving on to the other end of the site, in blazing sunshine and rather less windy than up on the signal box, we find Roger busy corbelling on the third row of the final horizontal stretch of platform 2c. At the end of the day, he was about 6 ft short of the end, almost there, then it's downhill all the way to the end. Bob J in the distance spent the day fettling the slope, cutting lots of pieces of imperial brick to size and following a line down from the top to mark the exact slope. Up above are Terry and Peter H backing up. Because we had to infill 2c rather urgently to reduce the risk of further slippage, they are now laying bricks at floor level, which is not very comfortable. But they got to the end of the horizontal bit, so that's that job ticked off. 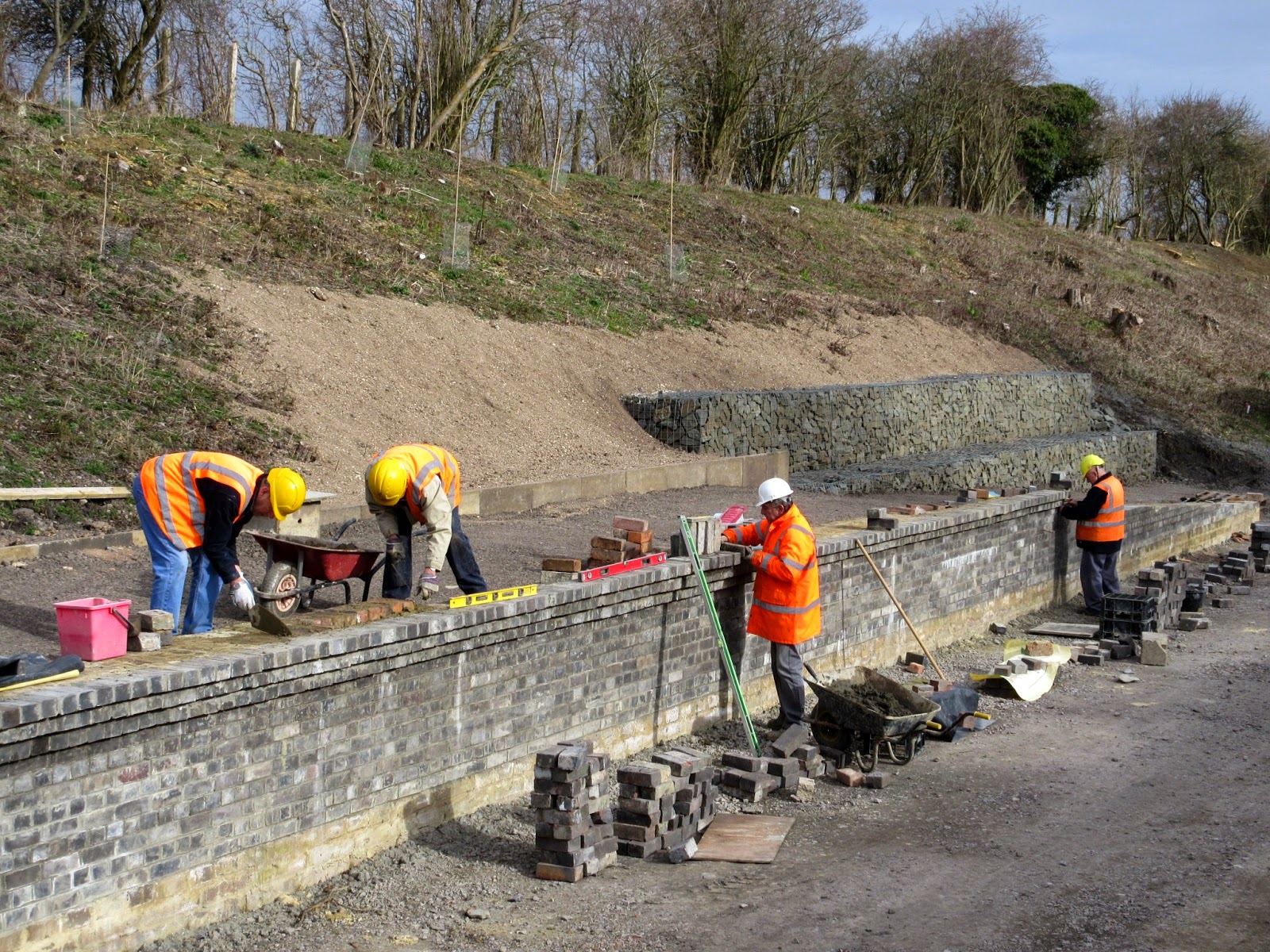 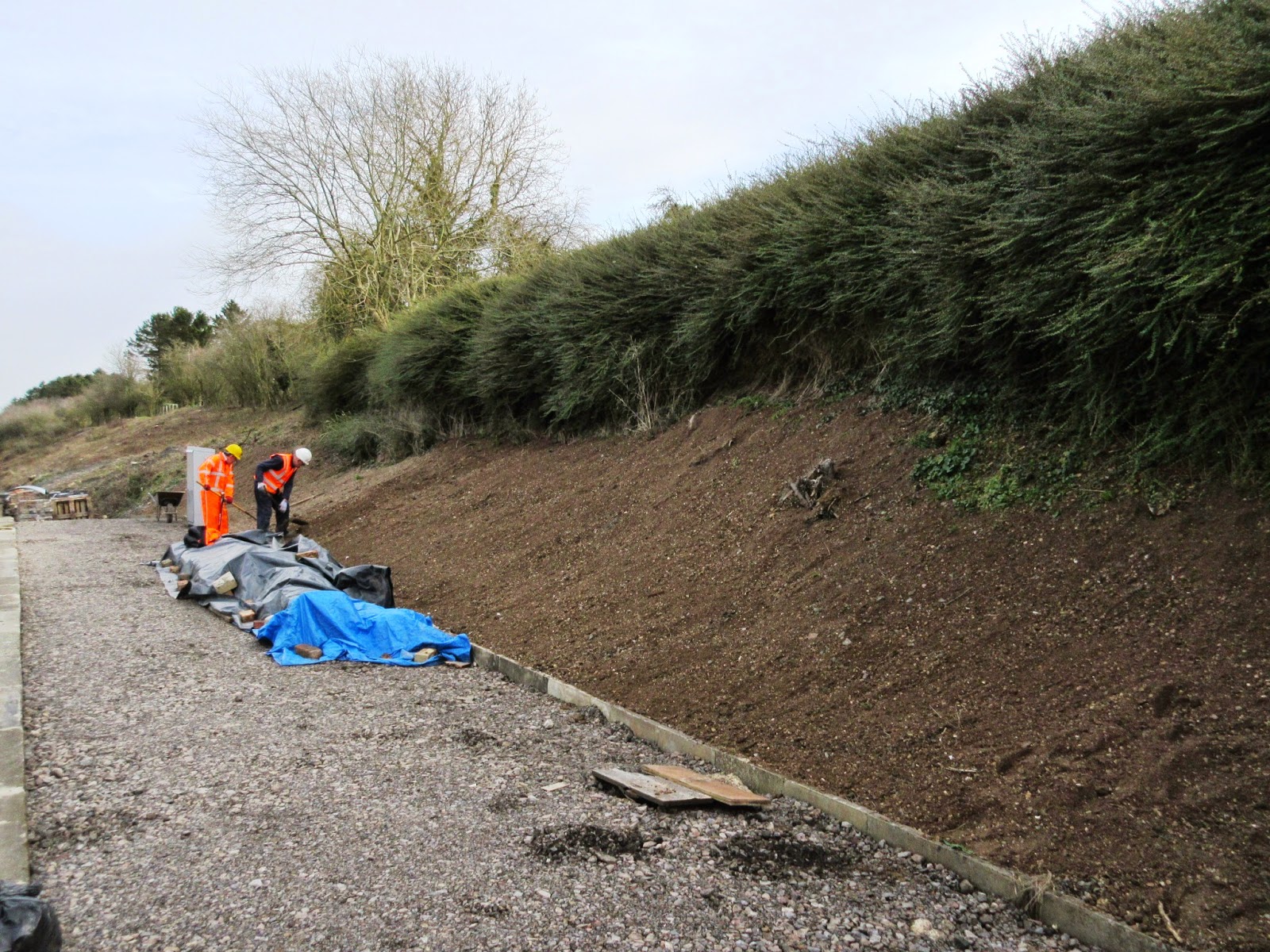 On the opposite side more of the 60T of topsoil we were generously given has been spread out over the slope. This is to even out the bumps from the rough landscaping that the mini digger had left, and to provide a good base for the grass to grow. At the end of the day this area had been fully covered, seeded, and the grass seed raked in. Now we need some rain. Don't often hear me say that, but for once, yes please. 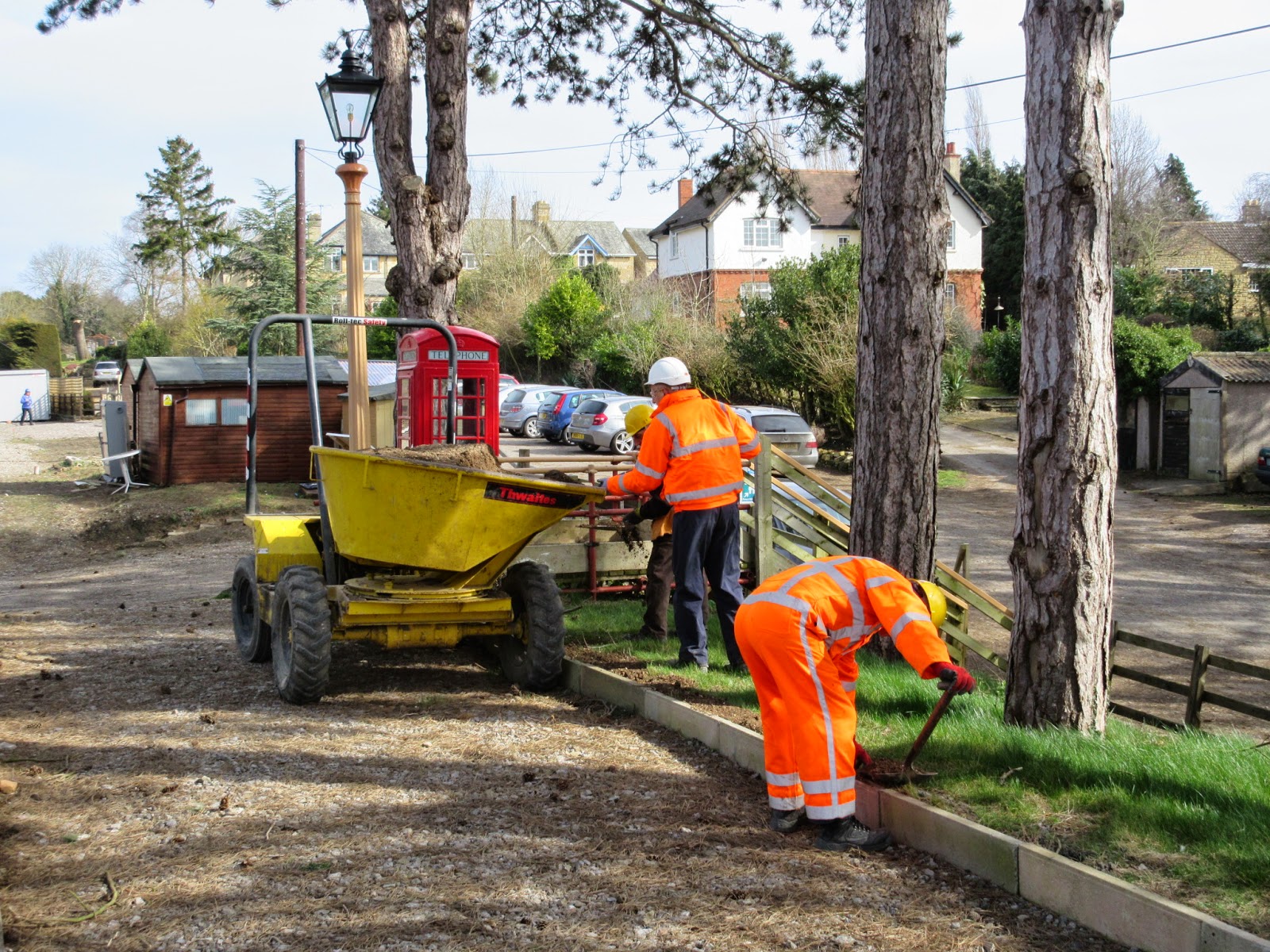 In fact quite a large team today undertook the task of using up the topsoil to finish off the rear of various platform areas, and in this picture we see the team on platform 1a putting the finishing touch to the lawn area at the rear, which had various gaps in it.

That was the easy bit. The harder bit was filling the dumper from the not inconsiderable pile of topsoil brought by three lorries last week 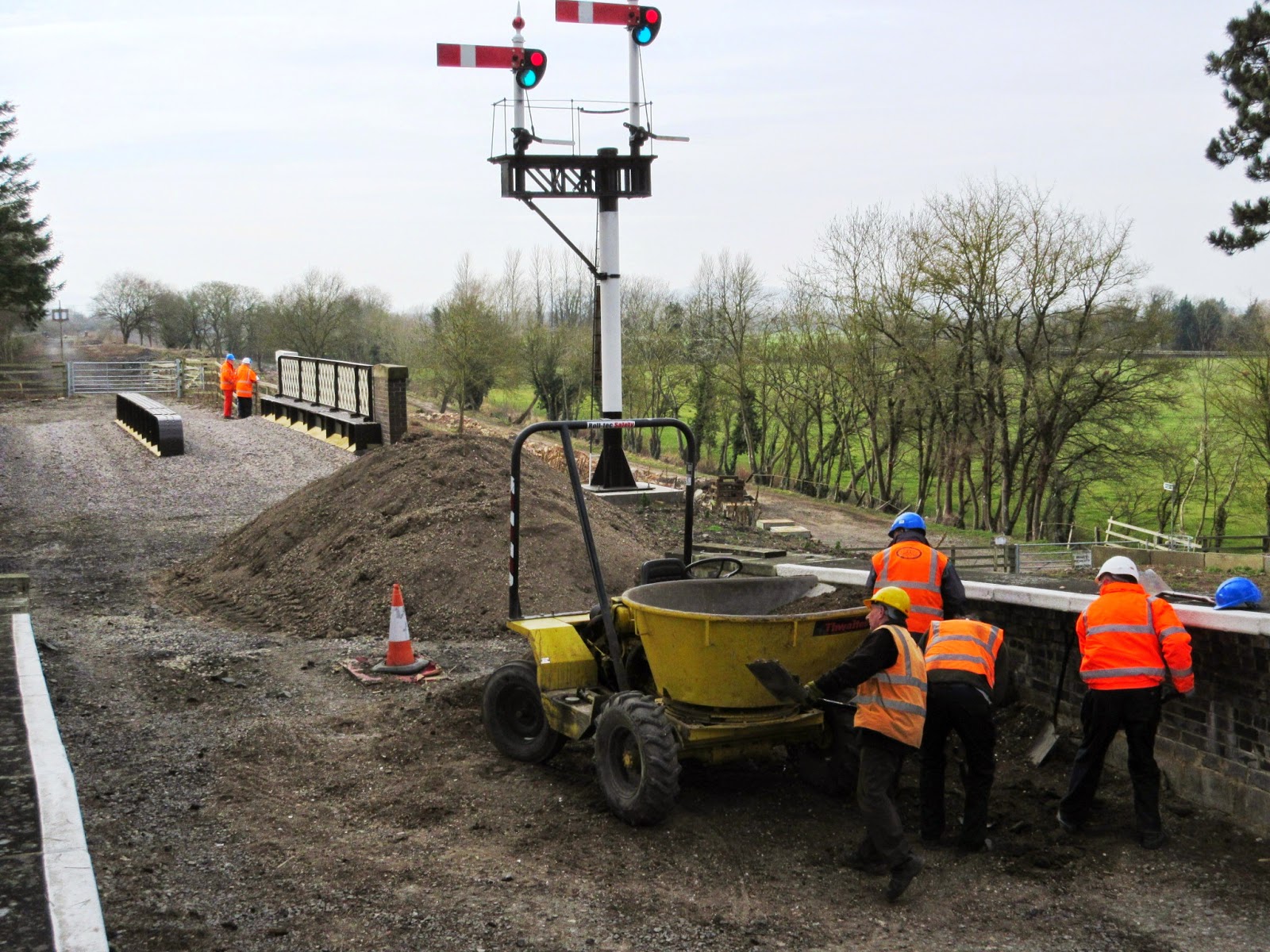 Here we see the other half of the team by the bracket signal, filling the dumper. Luckily the stuff was quite dry and light, and therefore not too difficult to dig up and throw. However, there is an awful lot of it, and we think the dumper was filled between 12 and 14 times today. Hats off to Dave, Steve, Brian and Keith! The place where the dumper is standing is where the first pile of topsoil was dumped, and we have all but cleared it today. Two more to go behind! We did well though, check out the other sites in the next 2 pictures: 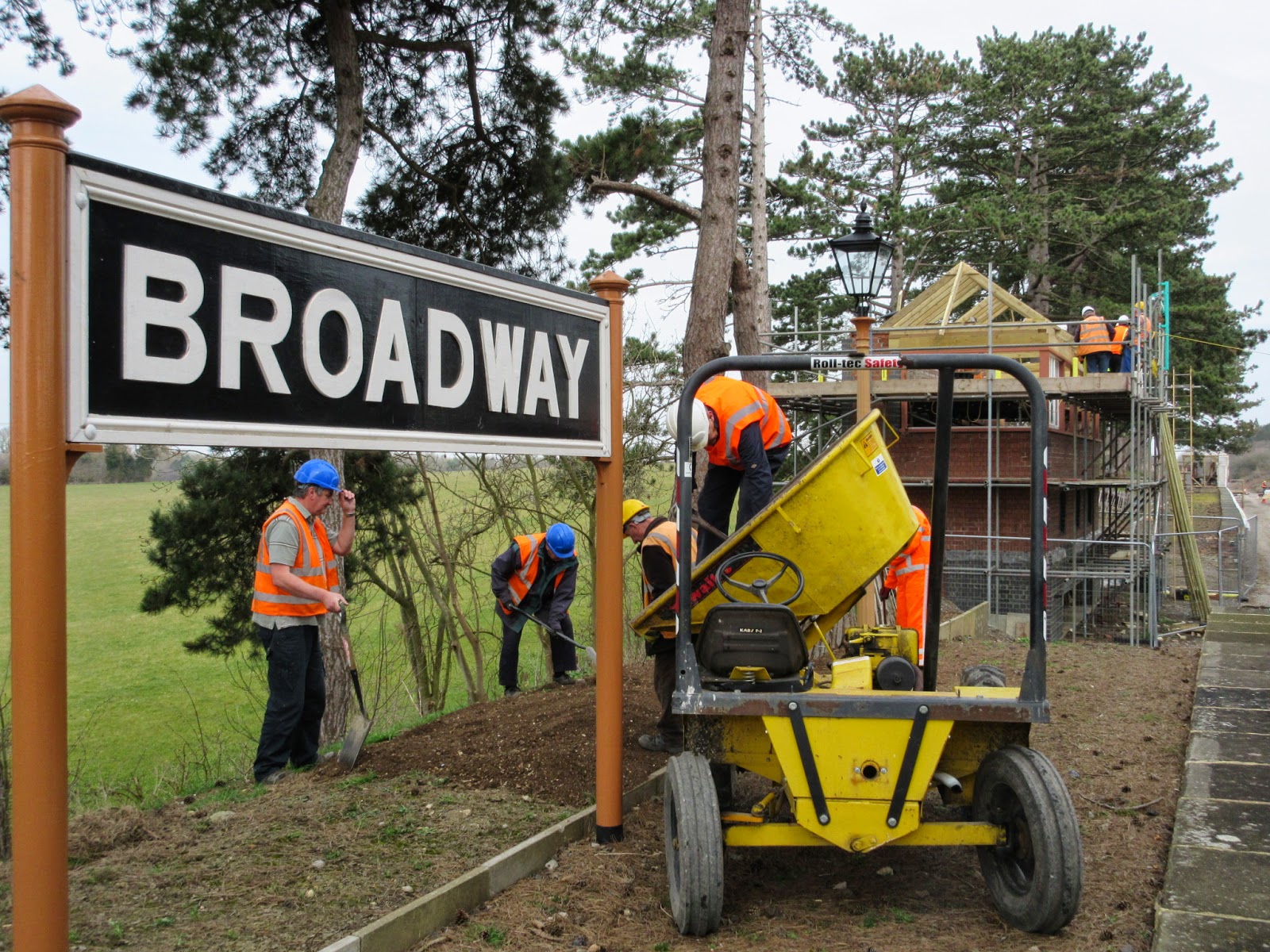 Yes, after ticking off the bank behind 1c and adding a little extra to 1a, we moved to the other side and started to landscape 2a, under and around the running in board. If you don't level out the site with topsoil and plant grass seed, the stinging nettles, brambles and ivy will take the decision for you. Better to get in there first with your grass.

Now to seed this area - we have run out of grass seed for now. 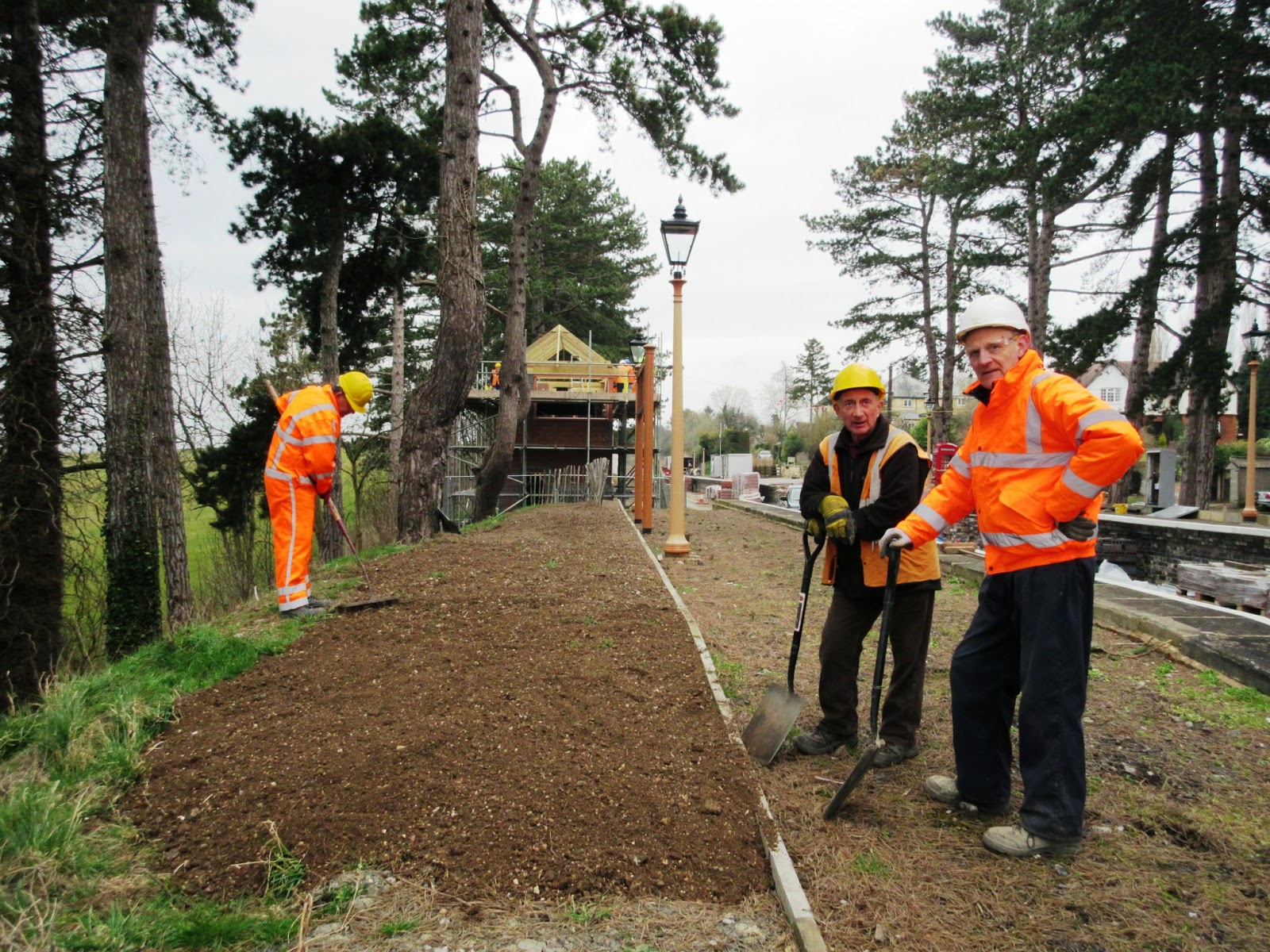 At the end of the day the topsoil team completed the rear of 2a, and had dumped one final load on the slope behind 2c (where the slip was). This will be the area we need to address next time round.

Mike was a wizzard on the rake, while Steve and Keith take a rest from shovelling to survey what they have achieved. Phew!

In the background you can see the outline of the new signal box roof.

Talking of landscaping, we must mention Vic who has made a marvellous job of the long flower bed out front. He was weeding it today, and it looks very welcoming with all the different plants he has found for it. So much better than the unkempt jungle that was there a year ago. 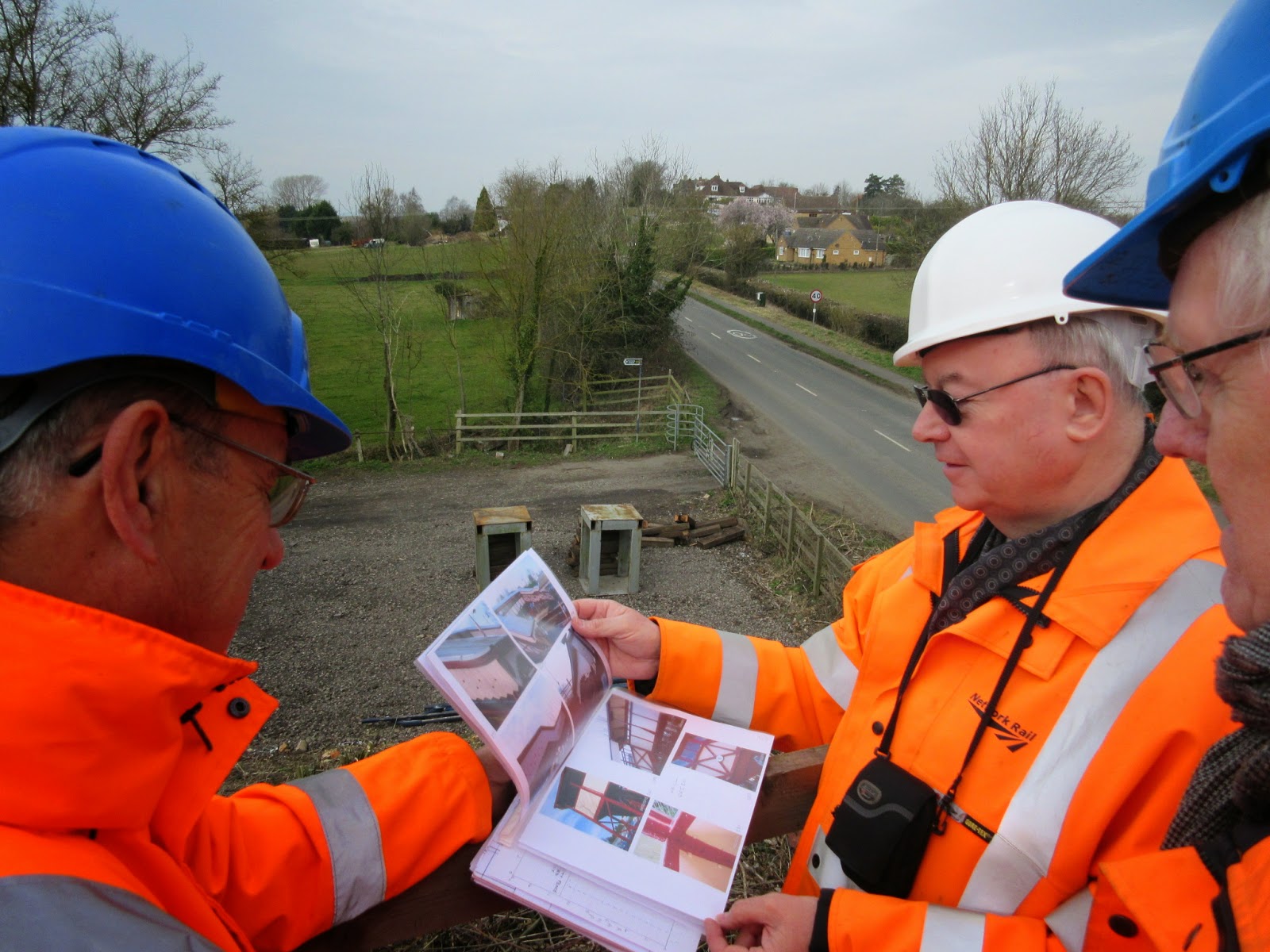 The last newsworthy item to report is the visit of Peter Muir, our volunteer engineer with much railway experience. Here he is with Roger J and Bill, to check out the site for the footbridge steps. We need to make sure that the trestles, visible below, are safe, and that the steps, once parked here for refurbishment, won't be in the way of track access up the slope for PWay material, once the extension works get under way.

Finally, a last look at the signal box roof at the end of the day: 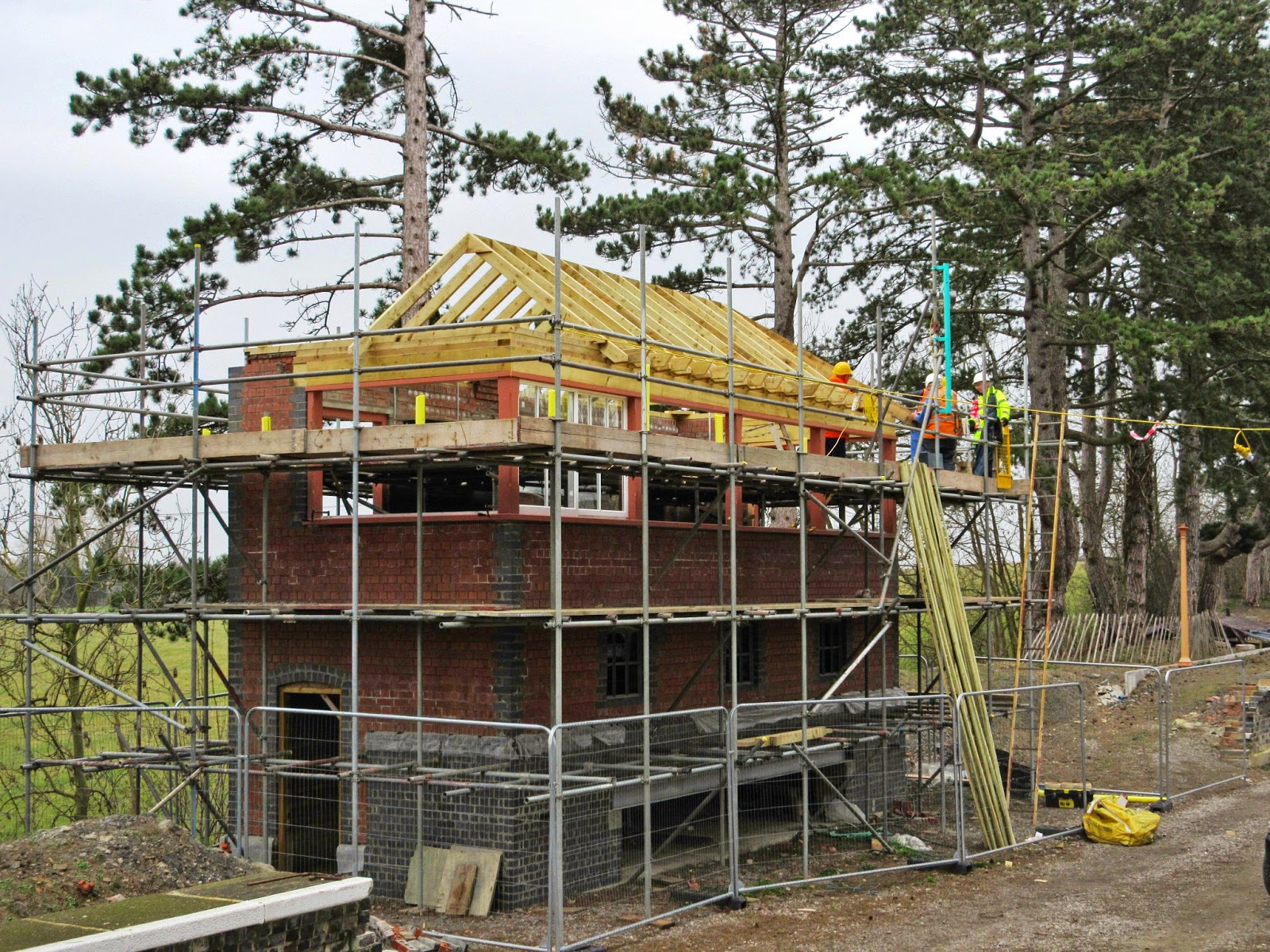 You can see the exact shape of it now. Only the rafters at the southern end remain to go on. Two sliding windows have been put in position, basically to test them, but also for fun. Don't they look great !

Once the rafters are in place, they will be covered in boards. These boards will be visible from below, inside the box, as in the original. Above, there will be a deviation from the original, as we will be putting on a layer of insulation. On top of this layer go the battens, then the slates. The windows are also double glazed for extra heat retention, for those days the box is worked in the cold.
The bit of platform you can see bottom left will be continued over to the right, passing in front of the box, when all is finished. A tunnel under the platform surface will allow the rods and wires from the lever frame access to the trackbed. The slot at the bottom of the box is where they will come out from under the lever frame.

The 'box is looking absolutely great- can't wait until the Welsh slates are on!

I saw weather forecast on BBC1 this morning and thought your day would be curtailed. However I watched Channel $ Racing later from Prestbury Park and thought they'll be okay and so it was a great day for progress. Well done lads. Wonders of Satellite as I am watching TV from Lake Maggiore, Italy.

Very impressed with progress on the Signal Box. just one thing though, when you fit the windows permanently remember that the end ones (i.e.those nearest the corner posts) slide BEHIND the one next to it. Carrog, on the Llangollen line, has got it wrong!

Had a quieter day than expected being off work unexpectedly and it was great to read about all your progress.

Will you be covering your slip repair (all the cages of stone) with top soil, or will they be left exposed?

The gabion wall is too large to cover completely. That's why we chose the darker stone. It will blend in more when the grass seed takes and nature reclaims the area generally.

Mr Clarkson
If you have spare time there is plenty of top soil to shift but no racing with the dumper truck.