The start of the signal box roof!

Today was one of those long awaited days, without any rain or frost. All our intended activities resumed with great vigour, and this being a Wednesday, there was an excellent attendance of volunteers at 27, with, at its peak, cars parked all the way down the drive. We don't see that very often. We missed Bill for much of the day, caught up in meetings in our planning office. 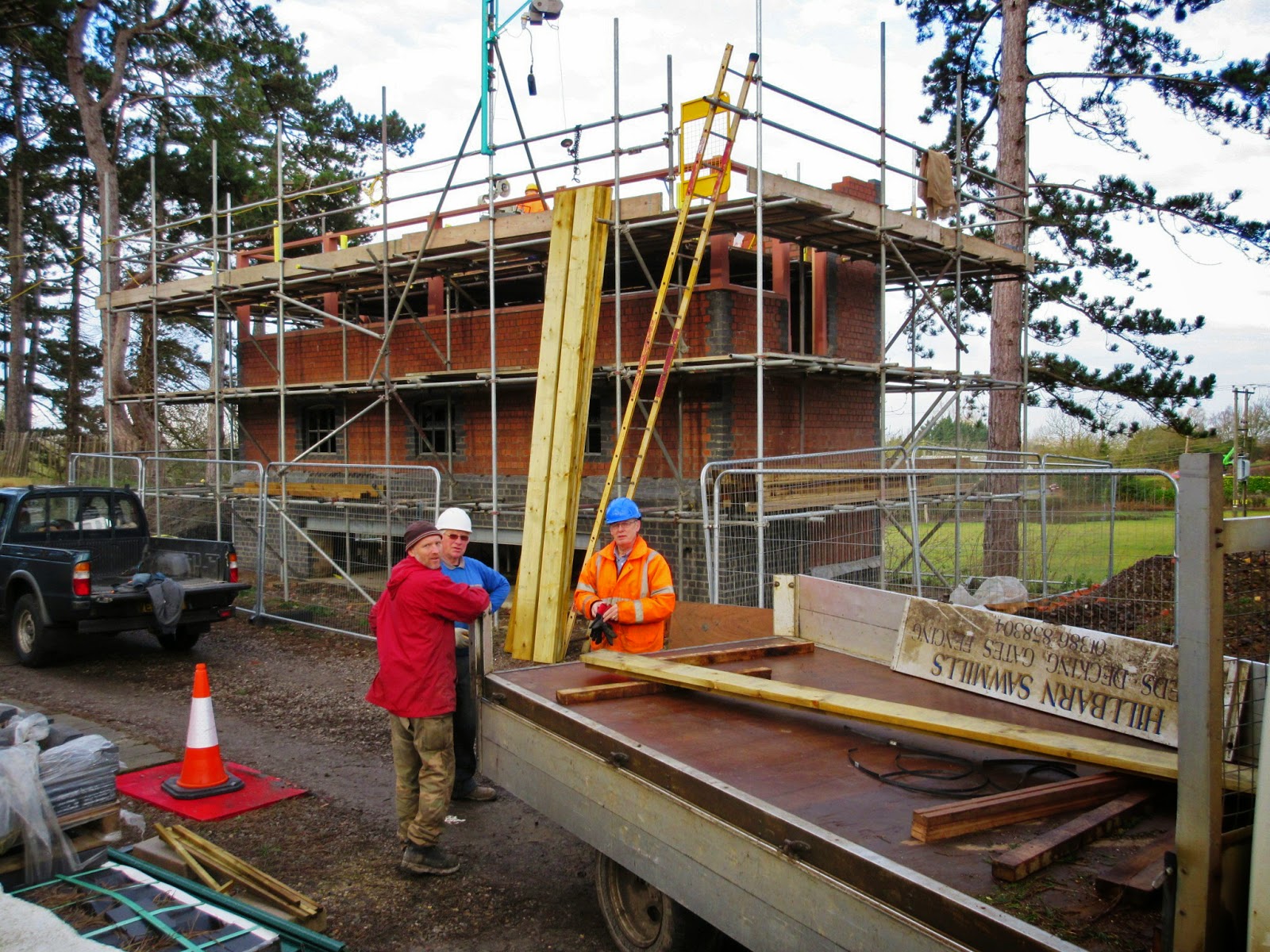 Even as your blogger parked his car, he could see that there was a delivery for the box - what's that all about then? It was the timber merchant with a supply of planks, stacked in the background, that will be used for the base of the roof. This then is the start of the roof structure, and more of that later. 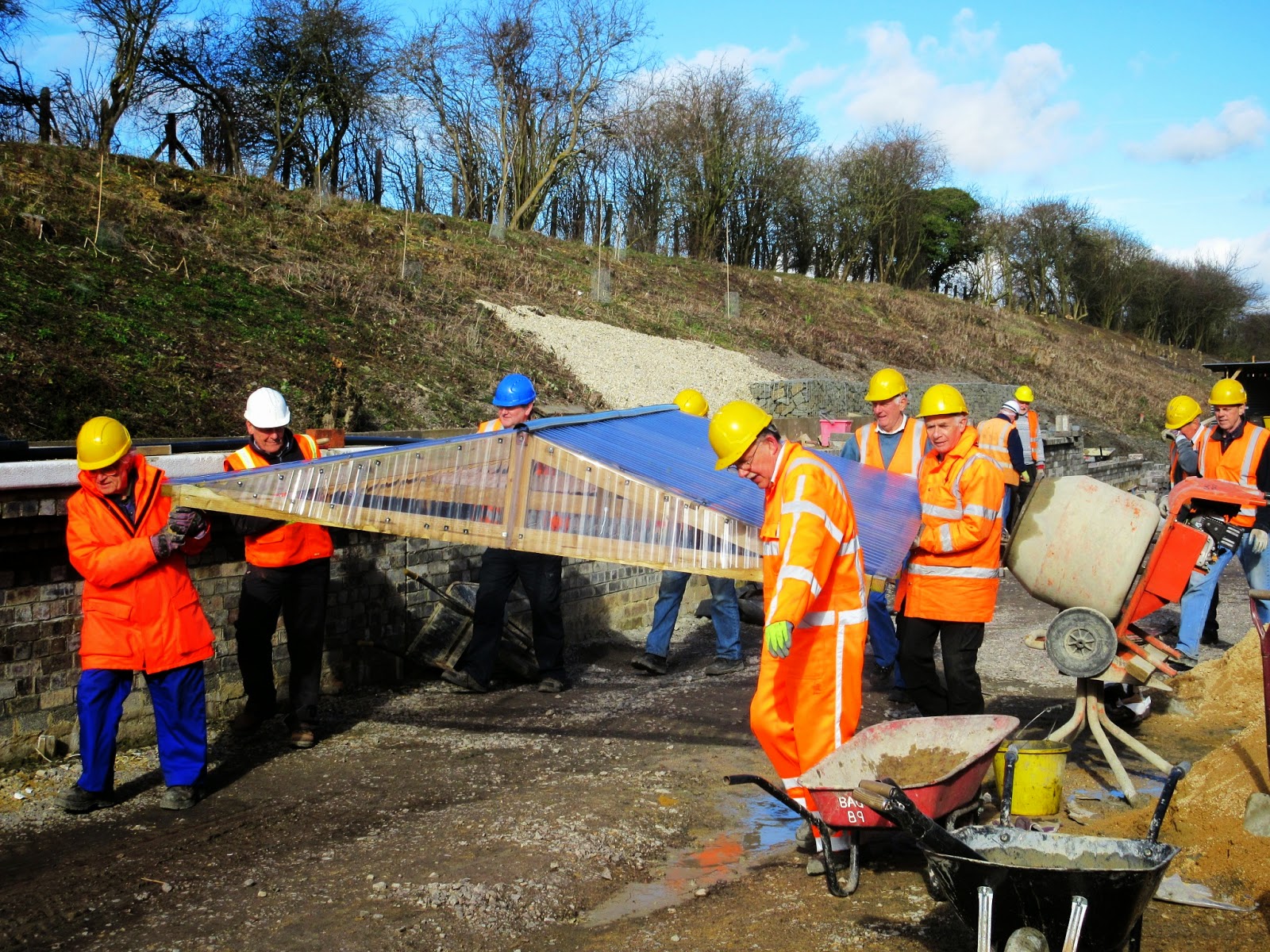 First, we had to repair, once again, the damage caused by high winds a few days ago. The dumper garage was once again split open like a tin can, and the bricklayers' shelter was found actually lying on its side, broken in two. After removing the broken sides, it was decided to salvage the roof and put it into temporary storage behind platform 2. Here we see a goodly gang of volunteers carrying the roof up the trackbed. 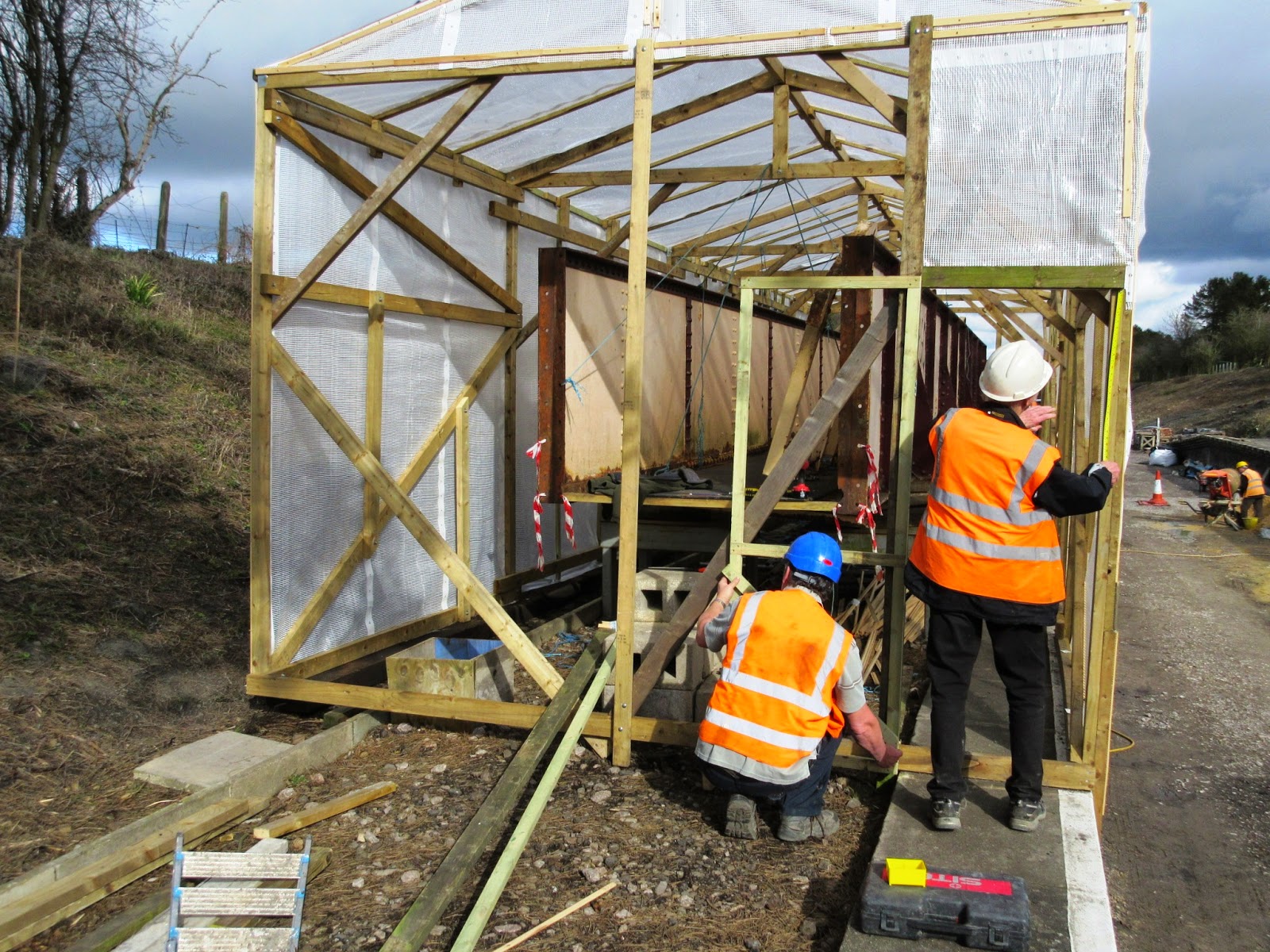 The shelter for the footbridge centre span had survived a lot better, and needed only a few adjustments to get it back into shape, before work continued with the fitting of the end doors.
We don't have a date for the arrival of the footbridge steps yet, but we are ready for them, and further sleepers were cut today to build up the trestles that will hold up the steps.

As a van will be running tomorrow to collect the new CRC2 running in board posts and Broadway modesty screen posts, we will stop off at Toddington to pick up a few more sleepers on the way.

A successful trip was also made to a firm of shotblasters at Northwick Park to deliver the two crowd barrier posts, which need a thorough professional cleaning, after their 50 year sojourn under the clay. They will be returned to us in a week, powder coated in zinc primer. The cost of this is being sponsored by a volunteer. 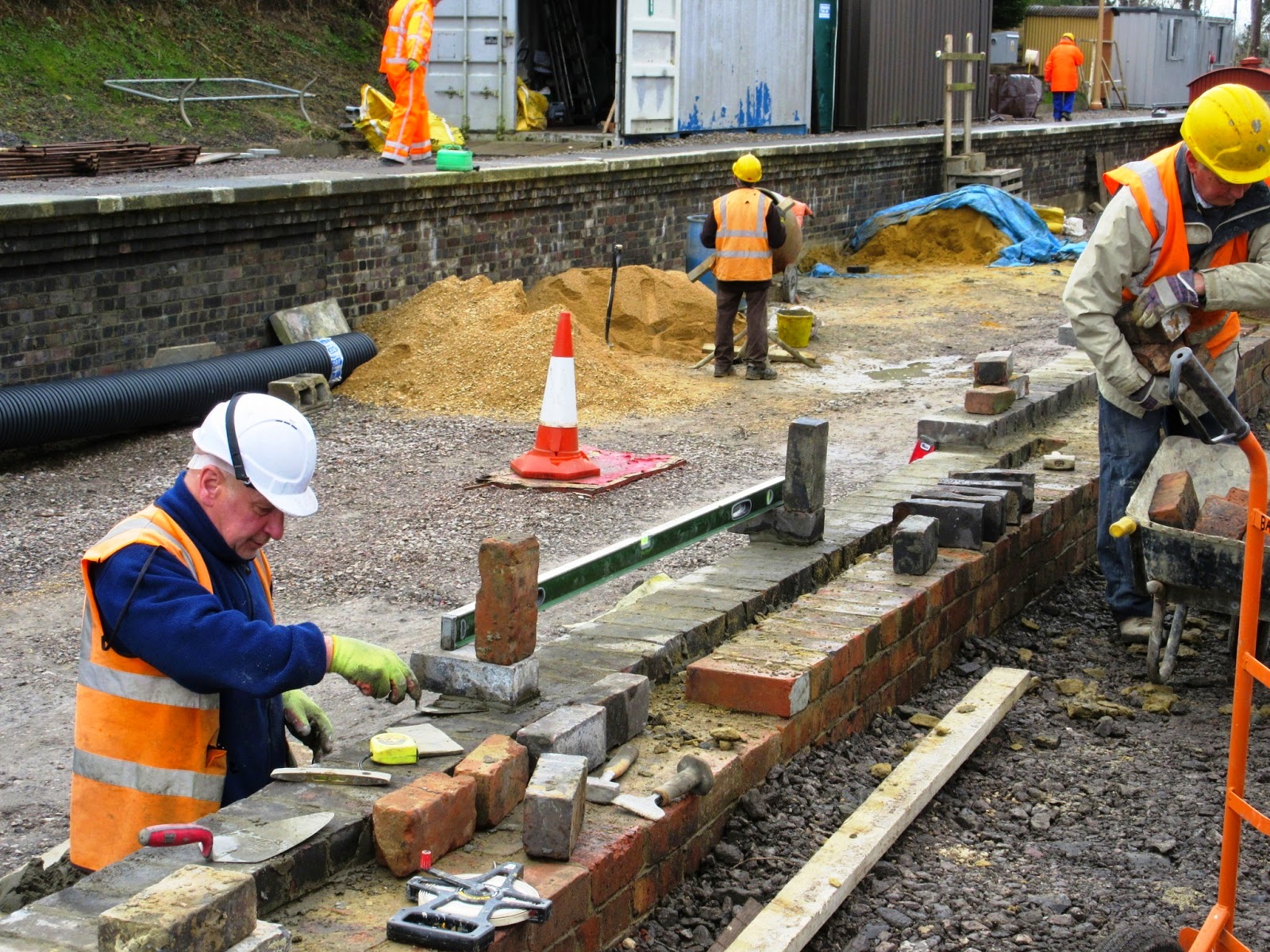 Brick laying also resumed. This is excellent news, as we are very keen to fully backfill 2c to be quite sure there will be no further slippage of clay. Here we see Clive setting himself up for a further row of corbelling along the last level section of the platform. Up on top is Peter H supplying himself with reds to back up the previous row of corbelling. One more row of corbelling, and then it's only the downward slope left to do.

In the background is Steve on the mixer, alternating between loads of black, brown and weak mix concrete. The mixer is a petrol driven one and is very particular - left in its normal rest position it will cut out; tipped too far forwards it will run, but empty its mixer drum. You need to know the nature of the beast, and get it just right. 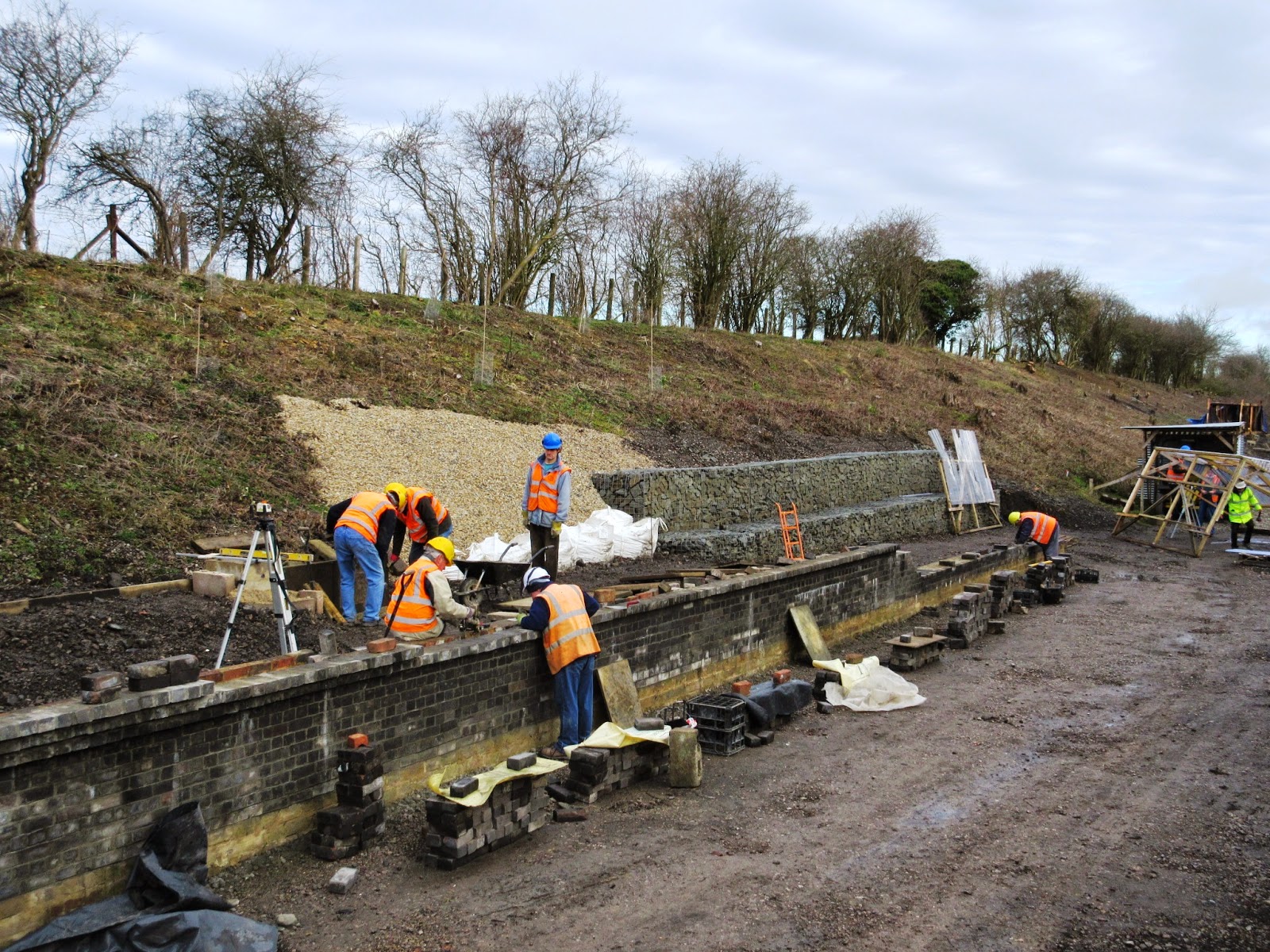 Looking the other way, we can see that job that still needs doing at the northern end of 2c - a few more slabs need to go in to meet up with the supporting gabions, while on the wall it's a question of finishing the corbelling and completing the slope at the end. Bob J is the man on that particular job, and the end of the day saw it almost finished. 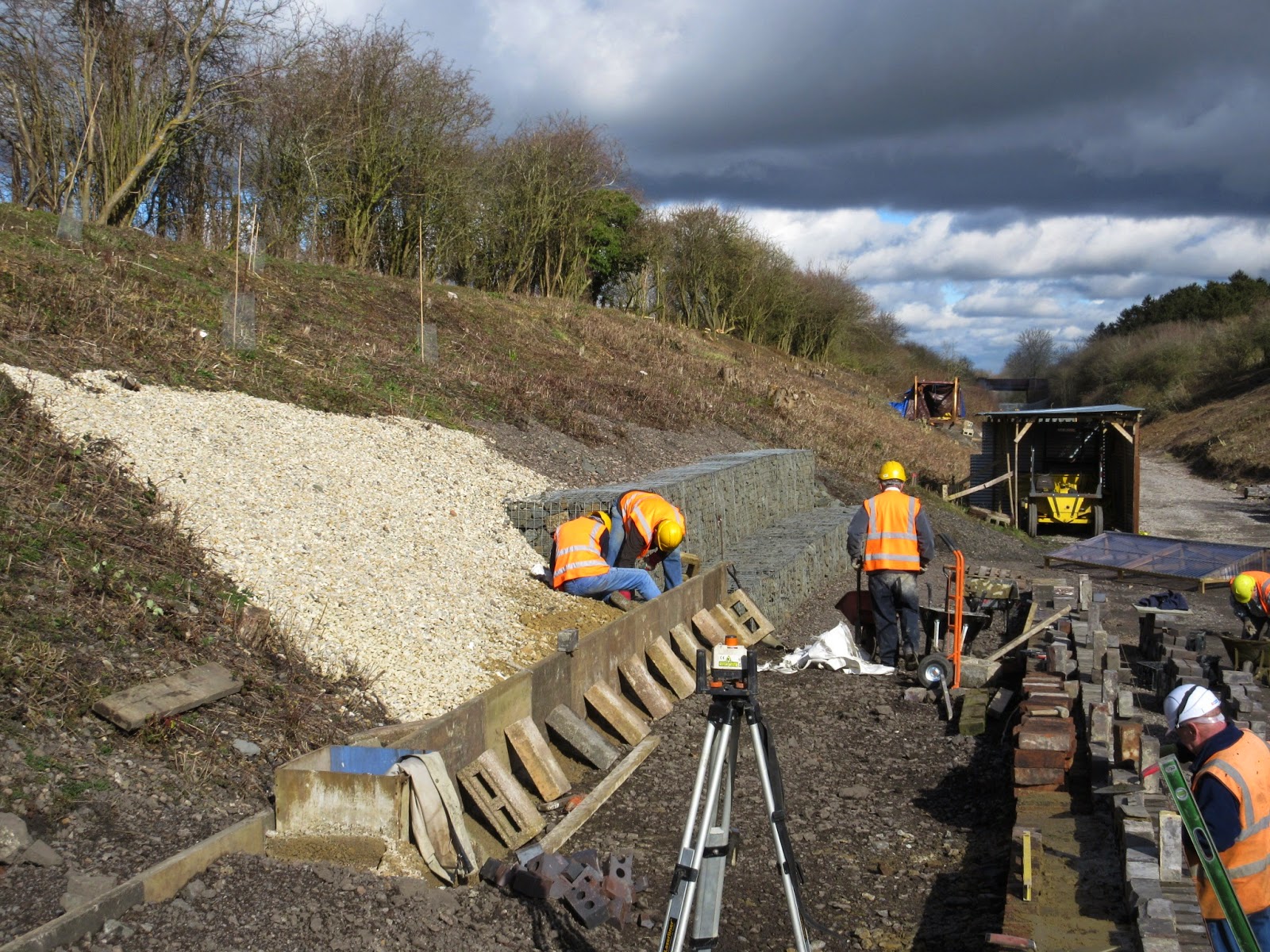 The most urgent part of completing 2c was the positioning of the vertical slabs at the rear. As soon as those are in and the concrete has set, we can fill in behind them and stabilise the bank. We did 10 slabs last week, and here are Rod and Terry just putting in the very last one. Uninterupted today, they laid all 11 of the remaining slabs in only half a day. They are getting good at this; it's a pity the job is now finished. 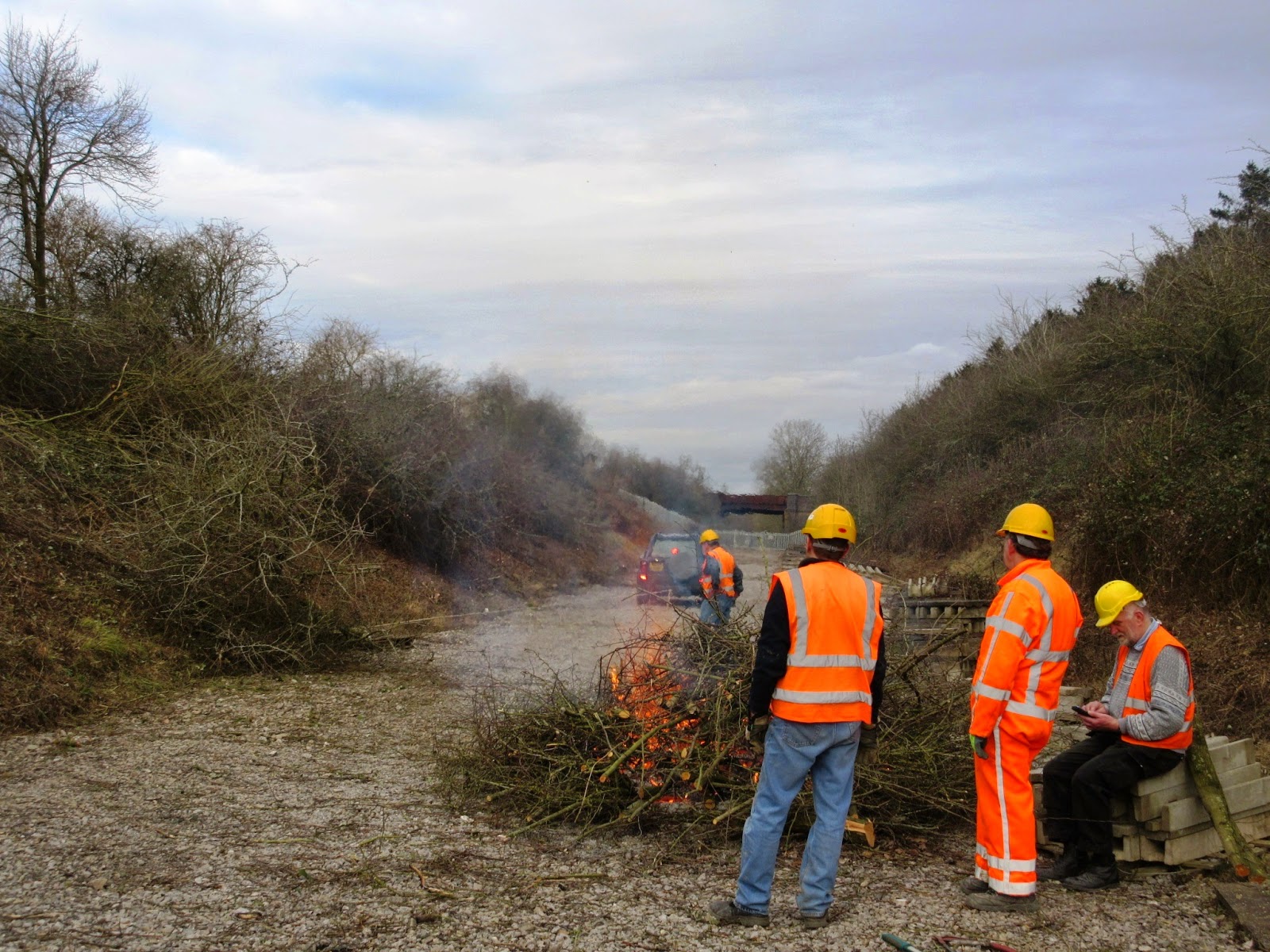 After completing the slabbing, Rod and Terry helped the brash burning gang down at the northern end of the cutting. Brian has now cut down all the Hawthorns down the left hand side, with a few more yards left to do on the right, just before the nesting season starts.
Strange but true, pulling the brash down the cutting slope and on to the fire is very tiring indeed, which is why there are so many pictures of volunteers sitting next to the fire. Brian volunteered the use of his Freelander again, and we dragged a pleasing number of big bundles down to the trackbed. But many more to go.

Down in our 'Goods Shed' shop there was a new face today: Jim B, who has volunteered to do some of the stints. Jim is a Broadway man and knows us well; he will be a good ambassador. Do come down and spend some money in the shop, we have lots of railway books and useful stuff, and it helps build the station.


And what was happening on the box during all this time? Lots of progress today ! Thanks to the very supportive sponsors for the windows that we have had, funds have been boosted and a lot of timber ordered. The heavy duty planks we saw at the beginning of the post were used to make a Bressummer beam.
You're probably wondering what this is (well I was) and here is the definition of such a beam:
'A load bearing beam in a timber framed building. The word summer derived from sumpter or French sommier, “a pack horse“, meaning “bearing great burden or weight“. “To support a superincumbent wall”, “any beast of burden”, and in this way is similar to a wall plate. 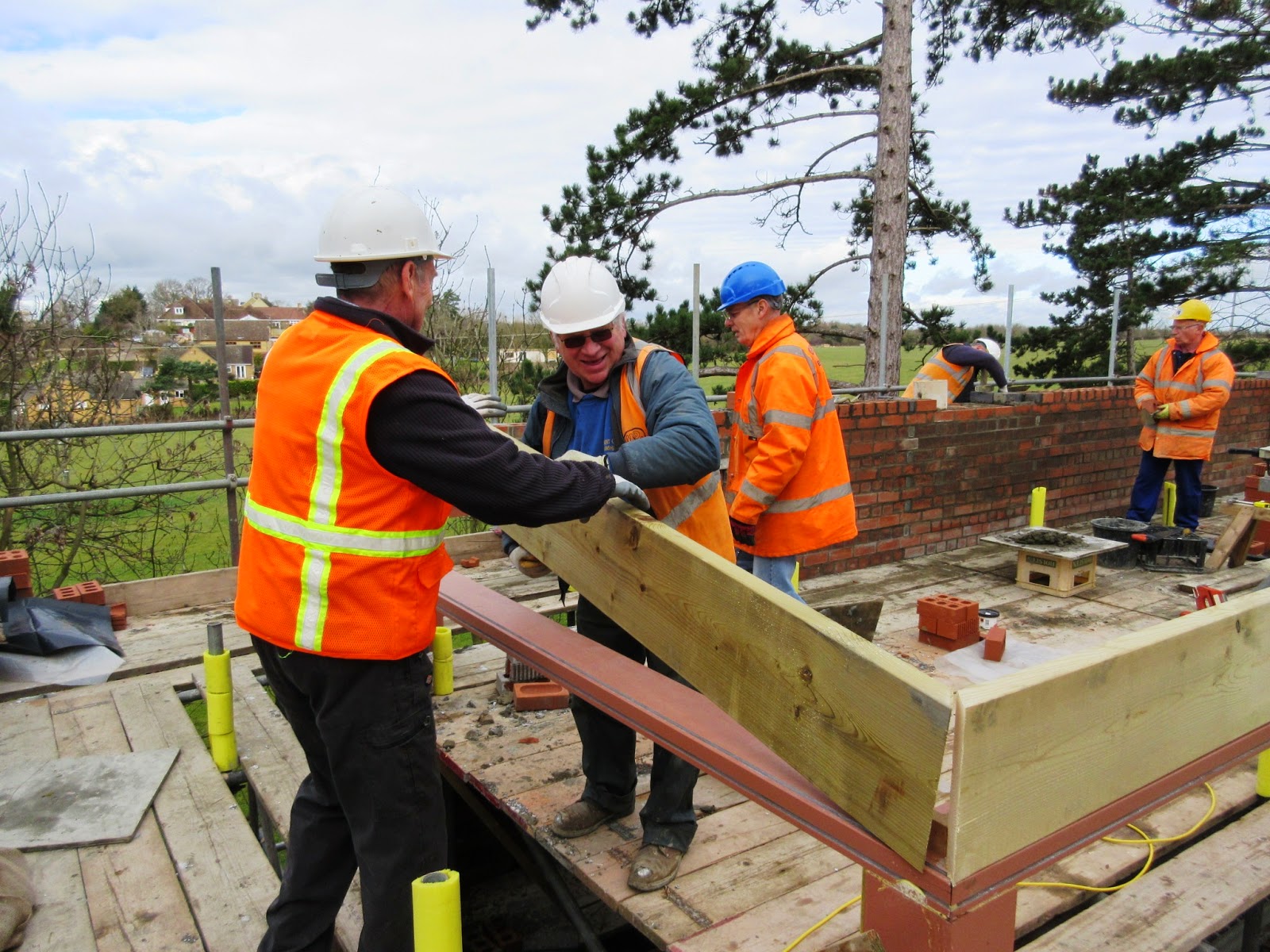 In our case this is a substantial load bearing beam that sits on top of the window frame structure and that supports the weight of the roof. 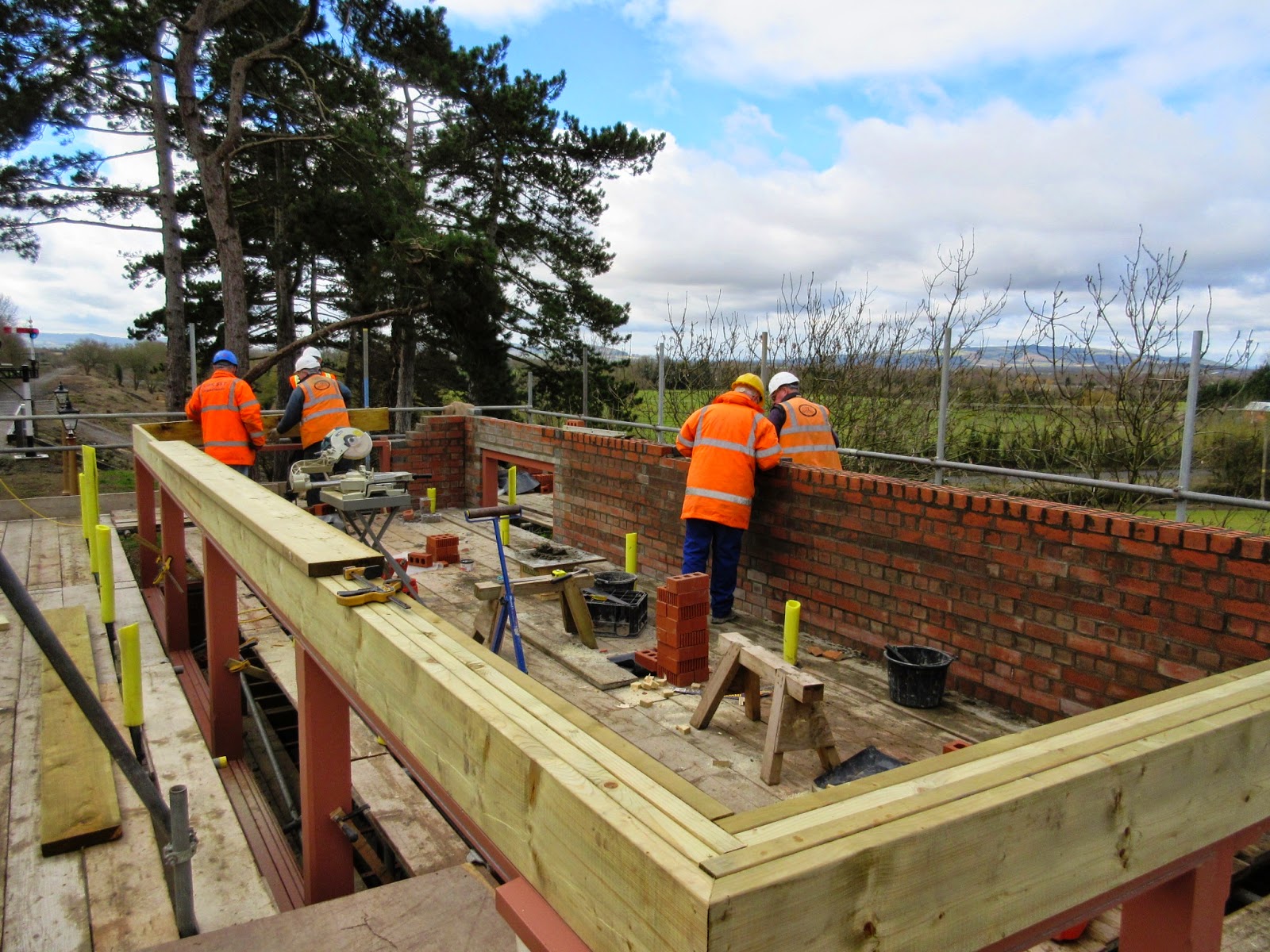 Here we see it in situ at the NE corner. It is made up out of 4 planks joined together into a single beam. About 75% of the structure was assembled today, the rest will be delivered next time.A further level of woodwork sits on this beam (see lower photograph). At the rear you can see Tony and Bob finishing off the last row of bricks to be laid. It's all coming together nicely! Only the chimney remains to be raised now, and this is awaiting construction of the roof to see where the flashing needs to go. 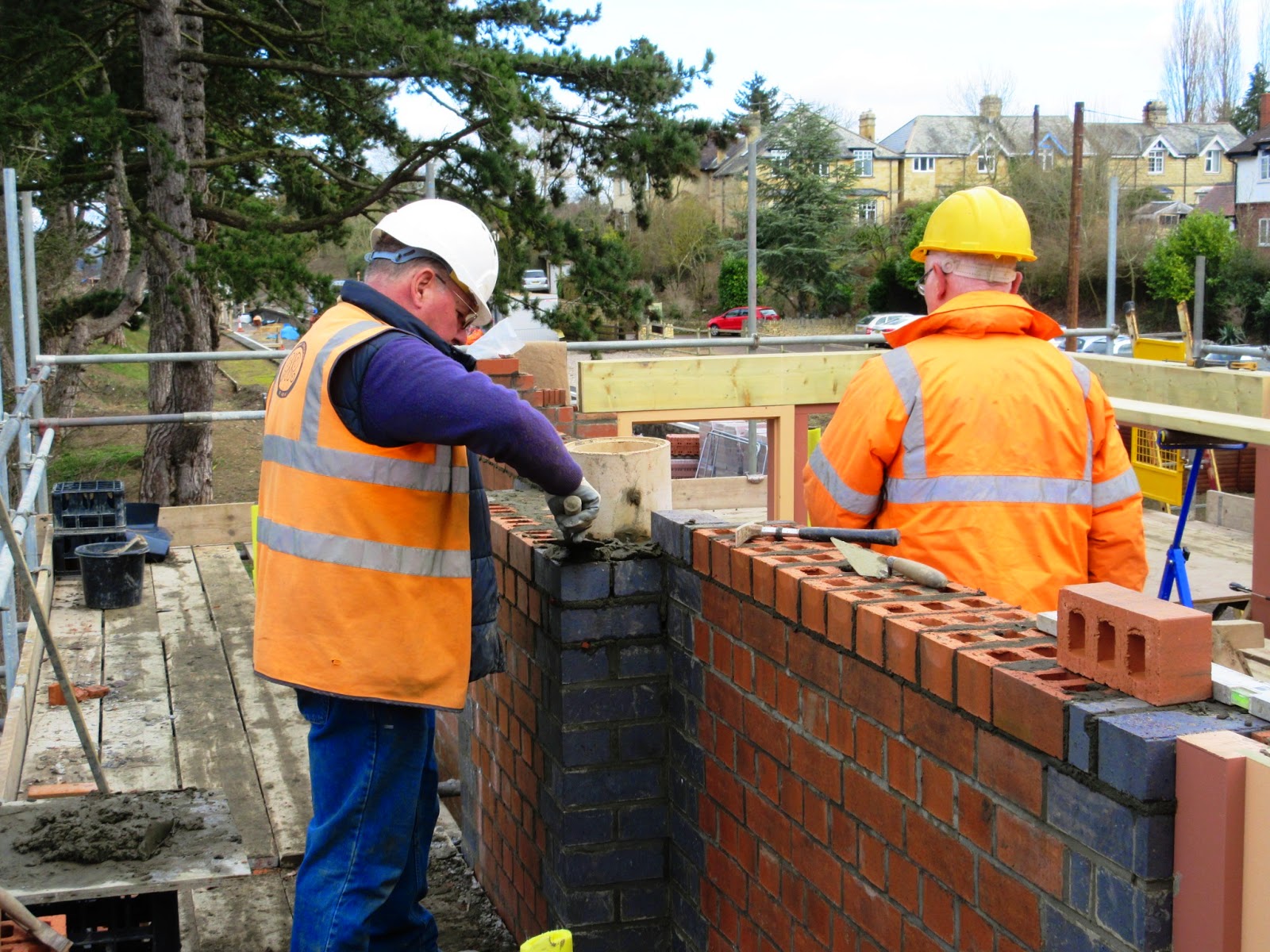 Here we see Bob completing the final row of bricks, in this case around the outside of the chimney. We love the interaction of the blues and reds here, very decorative it is.

One final brick laying action needs to be done: 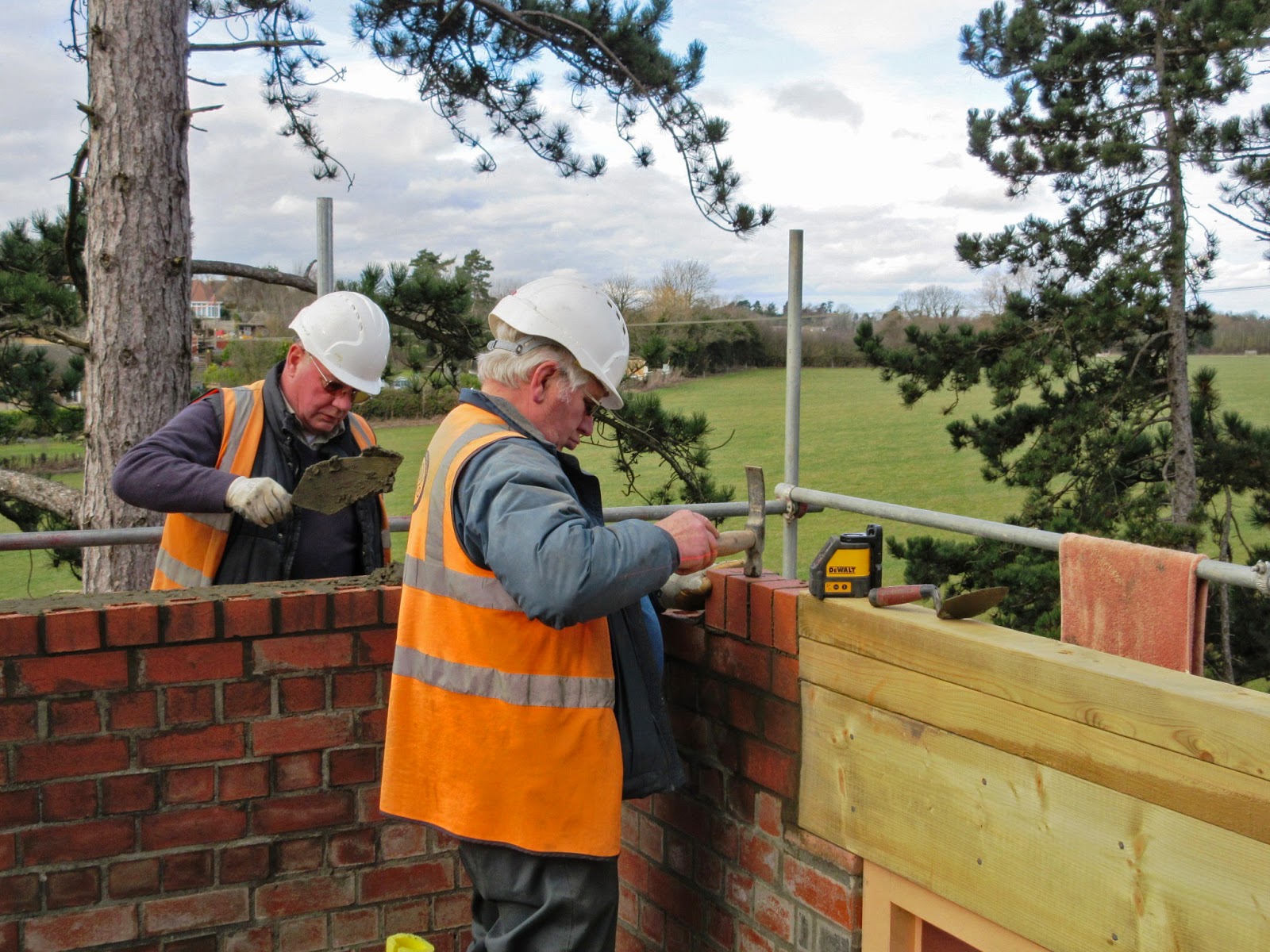 It's a single row of of half bricks, stood on their sides, that form a slope to the outside to match the line of the roof timbers.

Here we see JC starting this row (it was completed later in the day) and you can also see that this last row is at the same level as the Bressummer beam, plus two final timbers on top. Now the whole of the top of the signal box is at the same level.

Taking a few steps back, we can see our 'Shirley' box growing visibly, and looking more and more like the real thing. Can you see what it is yet? 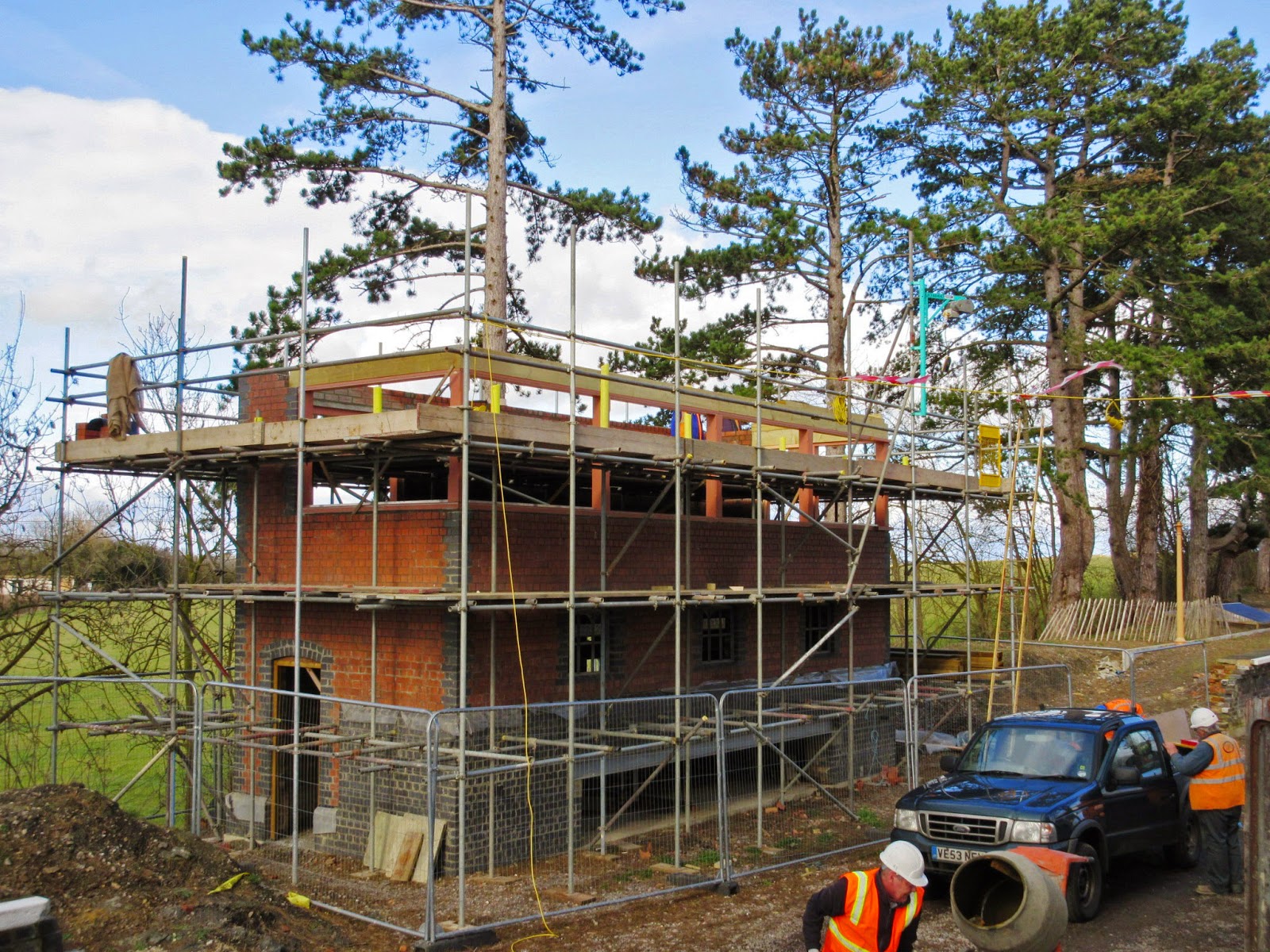 The line of sliding windows is now very clear, they go round three sides of the building. Can you imagine how good it will look, once the scaffolding is taken down? We are just itching to bolt on its own cast iron name board:

But first the roof. Stay tuned, and watch it go up! 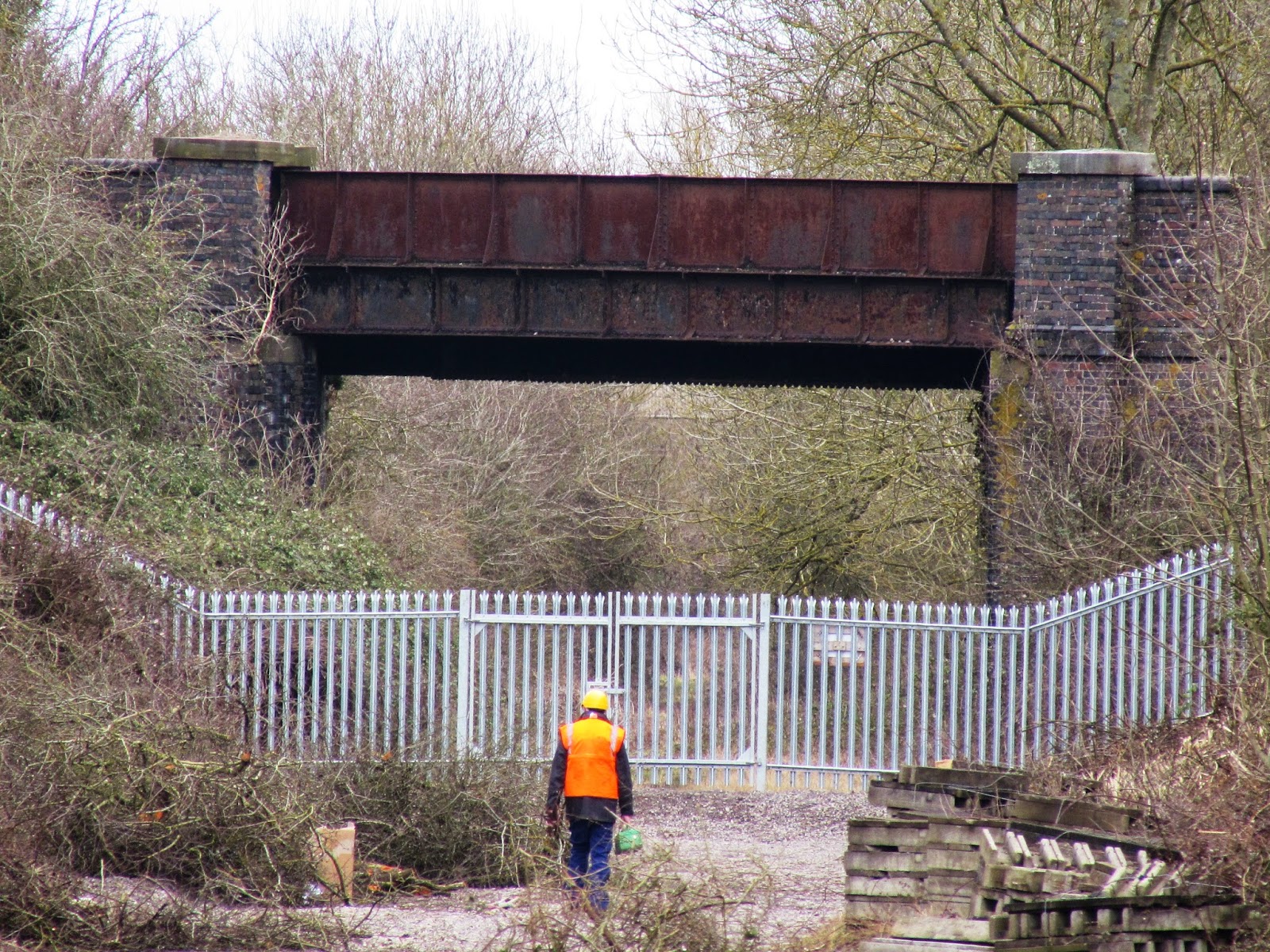 This one shows the northern boundary fence, and in particular Springfield Lane bridge. It is very rusty, and much of the brickwork is also damaged. 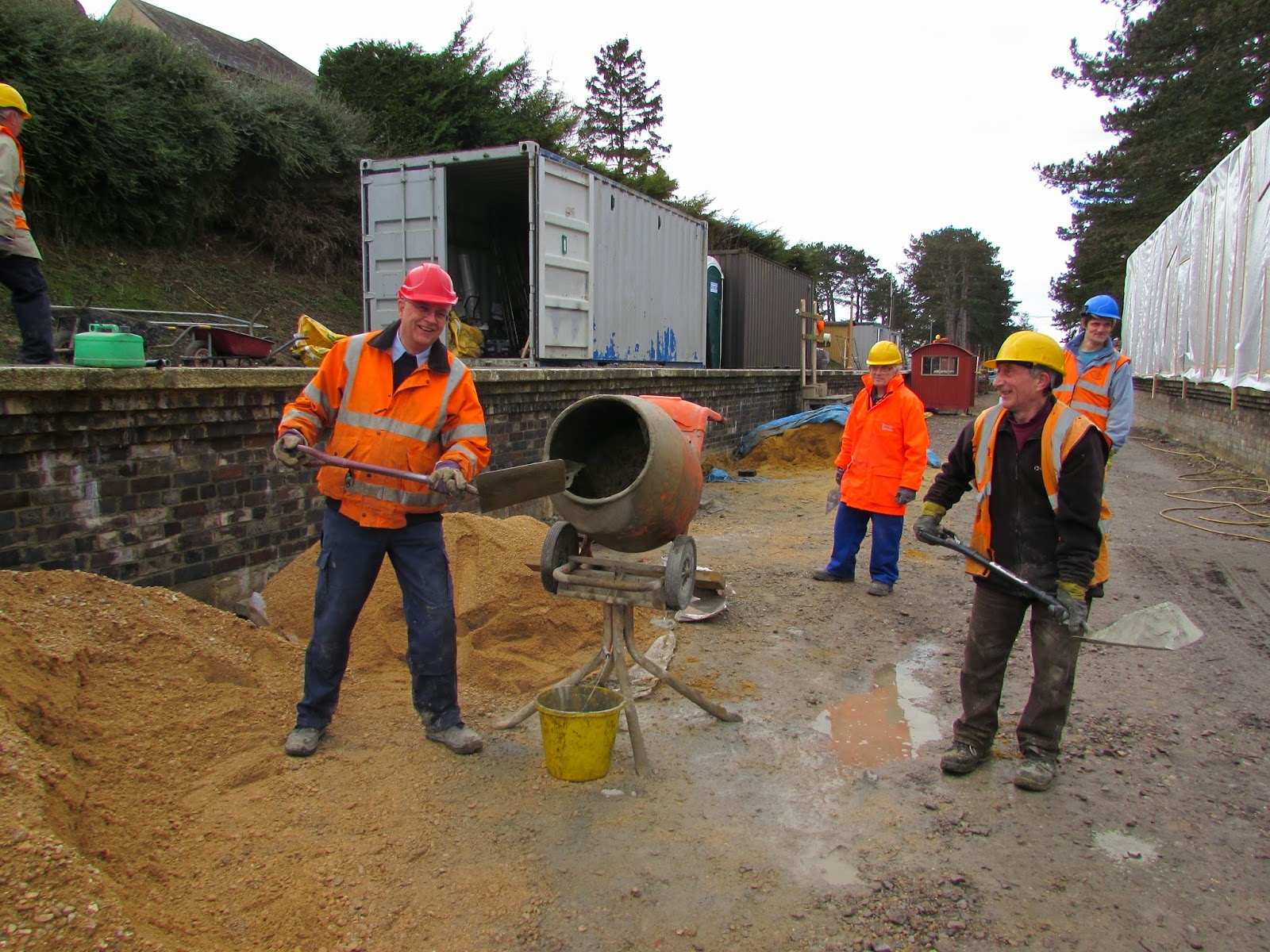 Fred also took this picture of Steve B and your blogger, taking it in turns to fill 'Mitzy the Moody Mixer'.

Before anyone lets the cat out of the bag via a sneaky comment, Yes, it's a pose. My shovel was empty.You just can't trust the internet. Steve is the only one doing any real work here.

Absolutely awesome! Well done folks. What a day of progress! It'll soon be the turn of the Station Building now!

We have all enjoyed the many super photos you have taken and posted on this blog.
I thought it was high time we had a photo of yourself! Everyone can now see that you don't just use a camera, you know how to use a shovel too!
Great progress at Broadway today.
Fred.

I assume there will be a "wall plate" - wooden rail on top of the brick wall - to connect the roof to - in which case it will also have to go on top of the bressummer beam and its additional two pieces of wood so that there is the same level all round?

Excellent news!! So exciting!! Can't wait for the whole station to be finished.

Just a question regarding the signal box door at the bottom, will there be a slope going down to it?

On the slope above the gabions, I see some thin vertical poles surrounded by what seem like cylinders of wire mesh. What are those, if I may enquire - are some plants going in? Thanks!

Noel. If you read an earlier post somewhere, Jo explained that these are young Corsican Pine tress that have been planted.

Thanks for the mention Jo, it's been a while since I last graced the station with my presence and I look forward to my new, regular, Saturday role in the "Goods Shed" shop.
Jim

Re the lower locking room door, I think it will be steps leading down from the platform to access it.

Re the lower locking room door, I think it will be steps leading down from the platform to access it.

DDA? No it doesn't apply. The Locking Room is not for access by the public.

Great progress as always, roll on the fence coming down and the honeyborne area groups station and turntable build! .. Who's job is it to maintain the road bridge and the current end of the line? Surely a coat of paint wouldn't go amiss for the long term preservation of the structure, and some pointing of the brickwork..

Re: Mack's comments and queries. The bridge provides farmer's access and is also a footpath, known as Springfield Lane. It is unsurfaced. It is the responsibilty (so far as I am aware) of Sustrans, who own the trackbed between Broadway and Honeybourne. They are unable to develop it as there is no access at the Honeybourne end and it would be very expensive for them to provide access ramps at Springfield Lane.

If there is no possibility of a footpath being made, why don't Sustrans sell the tracked to GWSR? Aaron

So with the building of Waitrose at the Cheltenham end and not owning the trackbed beyond Broadway a direct connection to national rail network is difficult, I always thought the long-term goal was Honeybourne?