The day started with many of the 20 volunteers getting a soaking, and I wondered whether any of the promised sunshine was going to show itself. However by 10:00 the rain stopped and things looked a   lot brighter. I think this lifted spirits as well, and everyone set too with a will on a variety of jobs. 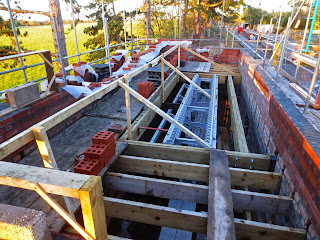 We promised ourselves a good session on the Signal Box with JC and Bob W in attendance with their regular helpers. However the brickwork and bricks had taken a terrible soaking and it was decided to fit the second trimmer whilst waiting for things to dry out. After a bit of extra "trimming" the trimmer is seen here fixed between the front wall and the lever frame. 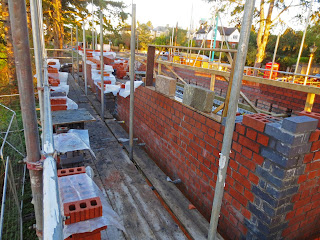 Some bricklaying was possible and in particular the hearth for the fire place was completed, 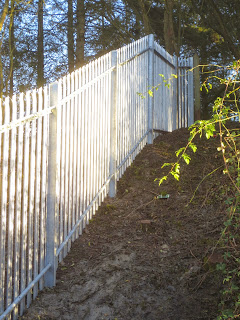 Moving right up to the northern end of the site the boundary fence was completed by Dave B and Vic. Dave  pointed out that the last 2ft of infill was as tricky as the rest of the job put together! Isn't it always  the way. A great job resulted from all the hard work and the attention to detail in the planning stage. 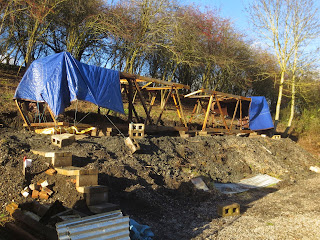 Moving southwards, here are the 2  footbridge towers resting in the sunshine, the tops, which are going to be reused, covered from the elements. 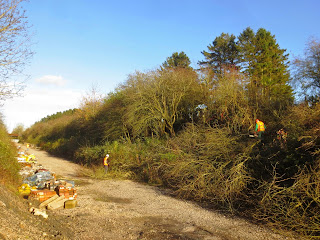 On the opposite side of the cutting Brian M was doing a remarkable job at felling the trees and saplings that populate the eastern embankment. This allows the loppers and choppers to come in on Saturday and get the bonfire going! Look at that blue sky. 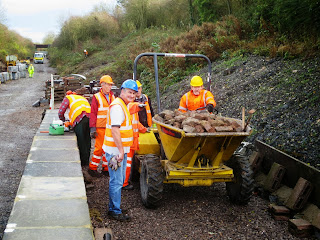 Moving southwards some more, a gang were starting to work on the infilling of 1C. This required rubble to be brought up from the car park and carefully laid in a single layer.

Here a motley crew bring the bricks in from the car park - having hand loaded the dumper. eventually 5 loads were brought up and expertly laid. 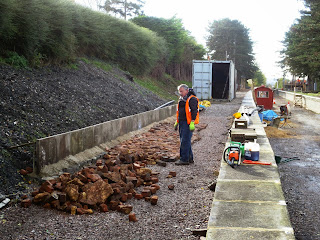 Here Mike S drew the short straw to sort it out - hard hat temporarily removed to scratch his head as to where the next load was going! 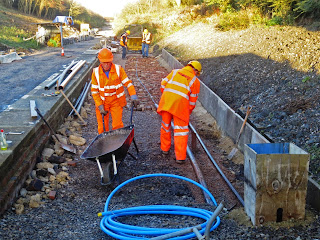 In the afternoon Terry and Gord (looking something like the Bobbsey Twins)  start the laying of the ducting to the last lamppost, together with the  water and power services to the north. 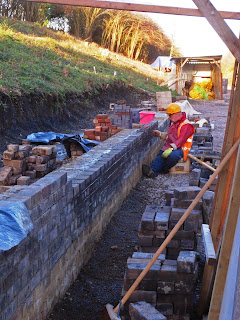 On the other side of the track bed Clive and Peter H laid 2 course of bricks over a 10m stretch. I am so pleased with the way this wall is coming along. 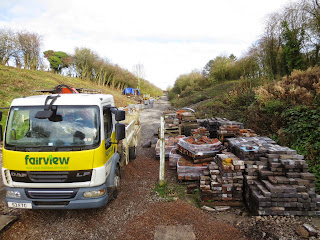 We were offered some reclaimed  red bricks by the Carriage and Wagon Department.  We rarely look a gift horse in the mouth and Jo rode shot gun with Richard on the Fairview lorry to go and collect them. I have to say there were more than I anticipated, and time only allowed 5 pallets to be brought back There will be some more for another trip in a week or so, Thanks to Richard  J and Peter B at Carriage and Wagon  for sorting these out for us. They ended up adjacent to our brick cleaning benches - they will be in the wall before you know it!

Last but not least Julie was doing a good trade in the Shed. Please come along and support us, by  seeing the site, having a chat,and spending your money!

A friendly robin  came into the mess room and cleaned up the crumbs and thereby gave Jo a photo opportunity. 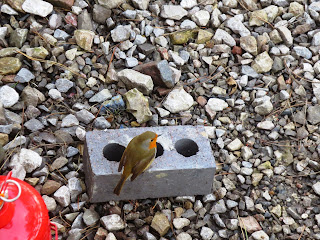 Sorry if  I have missed any action  - my time seem to disappear in a twinkle of an eye this morning.

Just in case you are not aware. A couple of period photo's of Broadway taken from 60's railtour have just appeared on the RCTS mystery photo's website.

Thanks for the tip.
It's amazing how quickly all trace of a station vanishes, in this case within 5 years.

Bill,
Will there be a water column at B'Way? Seen no mention of one.

We are keeping our options open by providing water and power to the northern end of platform 1.