12th November 2014 - A Small Part of Paddington Comes to Broadway 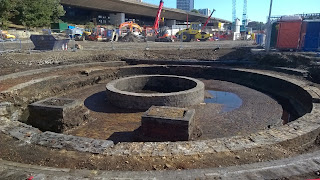 A month or so ago a regular blog viewer became aware of Crossrail activity at Paddington which he thought might benefit us at Broadway. Having made the initial enquiries and established contact with a named individual, he passed the details to me. My subsequent enquiries confirmed that a large number of bricks were going to be excavated out of an old GWR turntable pit. 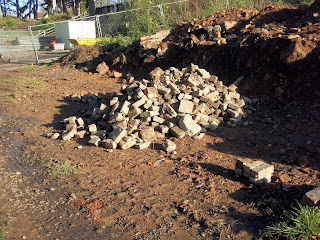 Because of the distance away from Broadway, Bag Volunteer Jim Hitchen went along to have a look at what potential there might be for a hit squad going in to recover some of the  treasure. Unfortunately the bricks were held together by some strong mortar and the likelihood of recovering a good number in a day would be small. Nevertheless I did persuade Costains that we would benefit if one of the load of bricks could be diverted to Broadway for our use.

Costains, who had been so helpful in directing the Mythe spoil to us, free of charge, generously agreed. A lorry load arrived yesterday and we will see how many good bricks it produces.

I would like to  thank Costains for the trouble they took in  in accommodating our request and to Matthew Brinklow in particular who dealt with us in a friendly and professional way.
Posted by Bill at 08:08