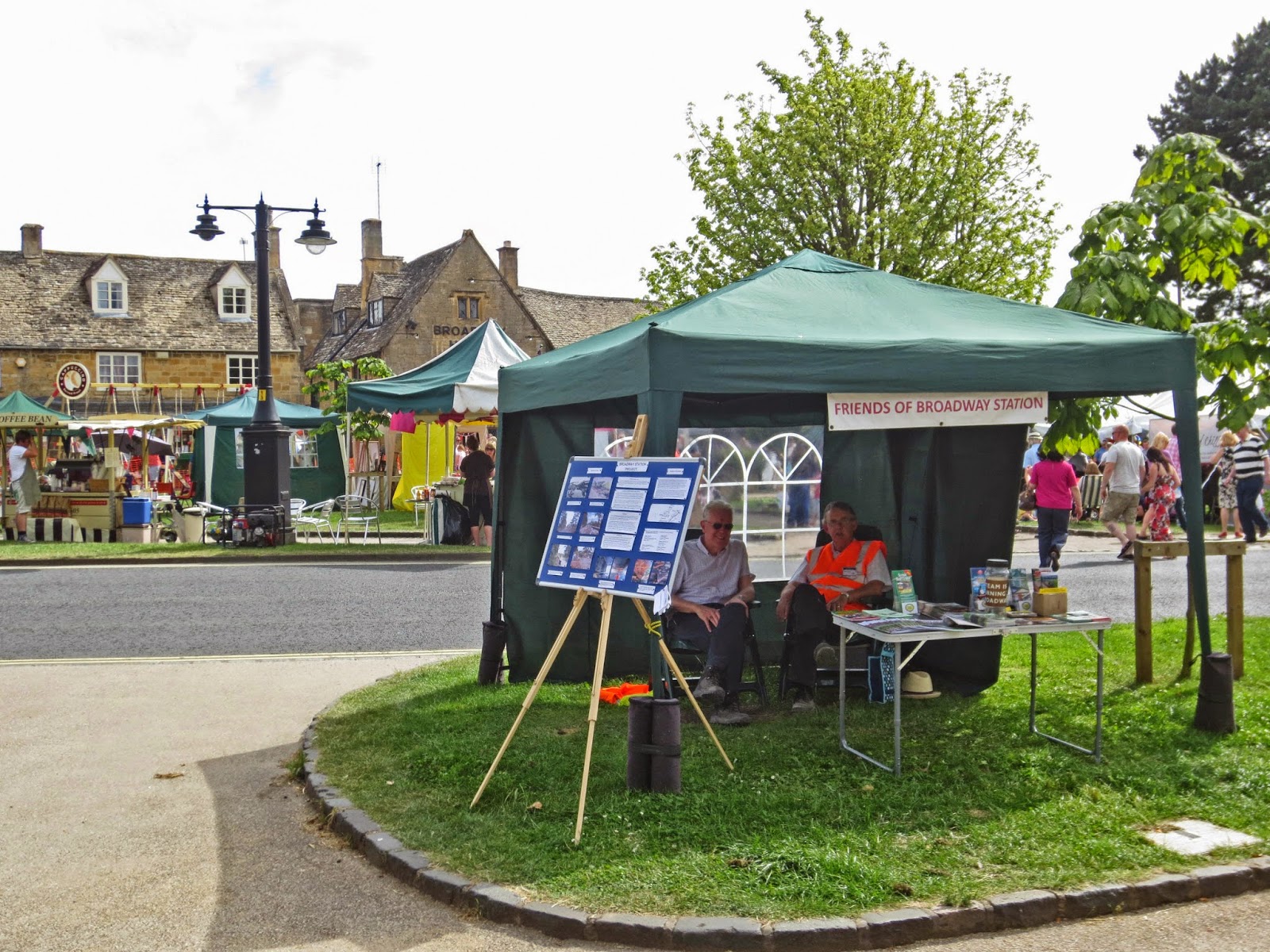 It was  different sort of day today, with 18
volunteers on the go, but not all on site.


It is the annual Broadfest weekend in Broadway and, with bright sunshine, it brought visitors out in droves. The BAG were offered car parking duties behind the Lygon Arms, the carrot being that the takings would eventually come in our direction! It required 6 of us to do various duties, either manning the car park, or manning a  Friends of Broadway Station gazebo. The job - to tell the many visitors about the Railway, and about the Broadway Station progress in particular. Although Mike Speake and I look fairly relaxed here, collapsed would be nearer truth, both of us having been on our feet all day! A huge thank you goes to John Blofield for organizing our participation in this. Also to Vic, Peter, Ron, Mike and Andrew for undertaking the hard slog.

Another  variation today was Jo and Roger J took some sample running in board  posts(CRC2) and  Broadway Gents modesty screen post to a fabricator at Malmesbury. Here is Jo's report:- 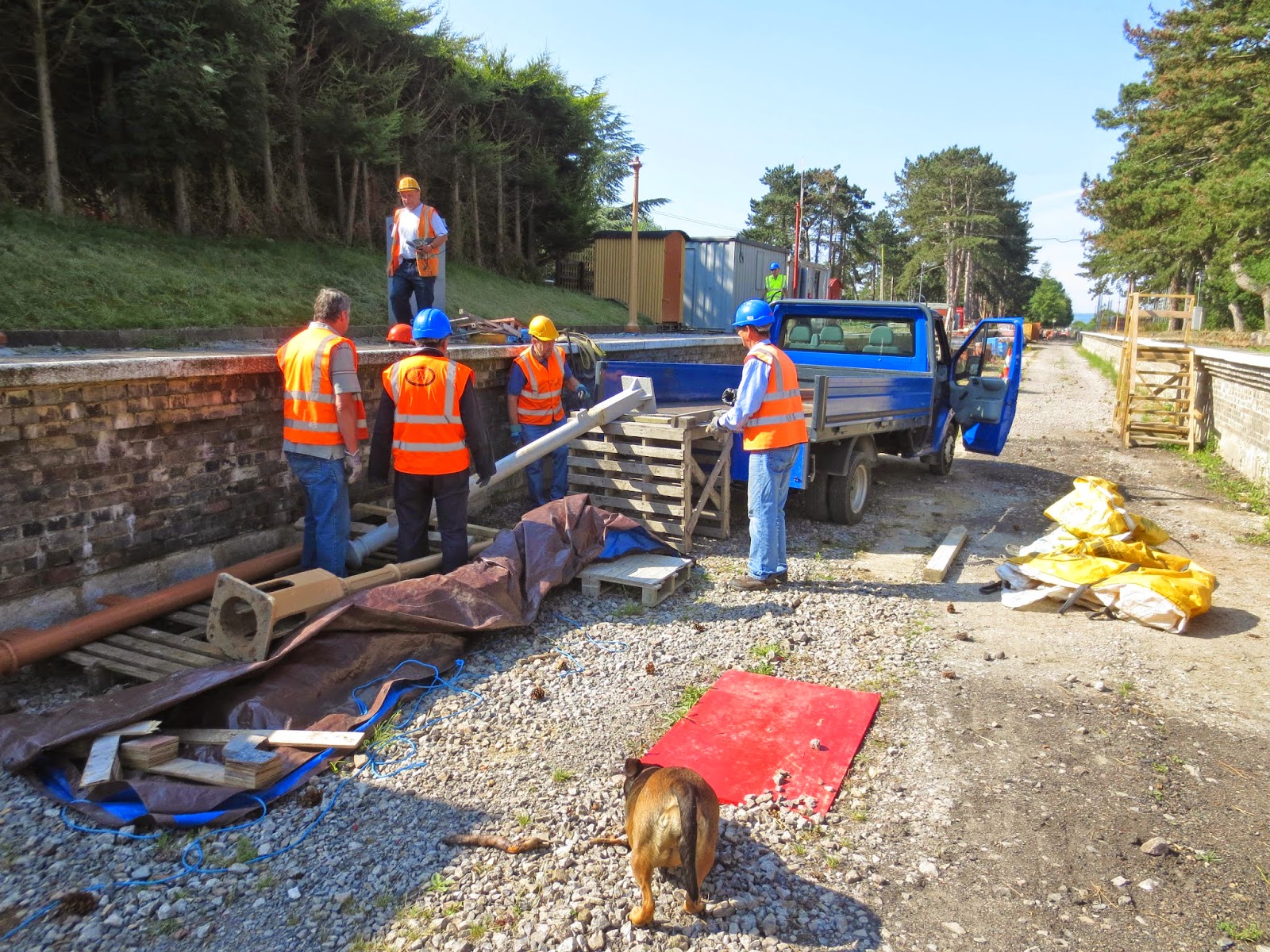 Roger and I took the GWR truck to the Iron Works and Gate Co in Malmesbury, who have agreed to make the CRC2 running in board posts and Broadway modesty screen posts, at cost. This is very generous. They did a lovely job of the posts for our first running in board and we have gone back to them for another go. It’s a father and son business, and in the picture is father Evans, who received our originals for copying, son Chris Evans being out on a job. 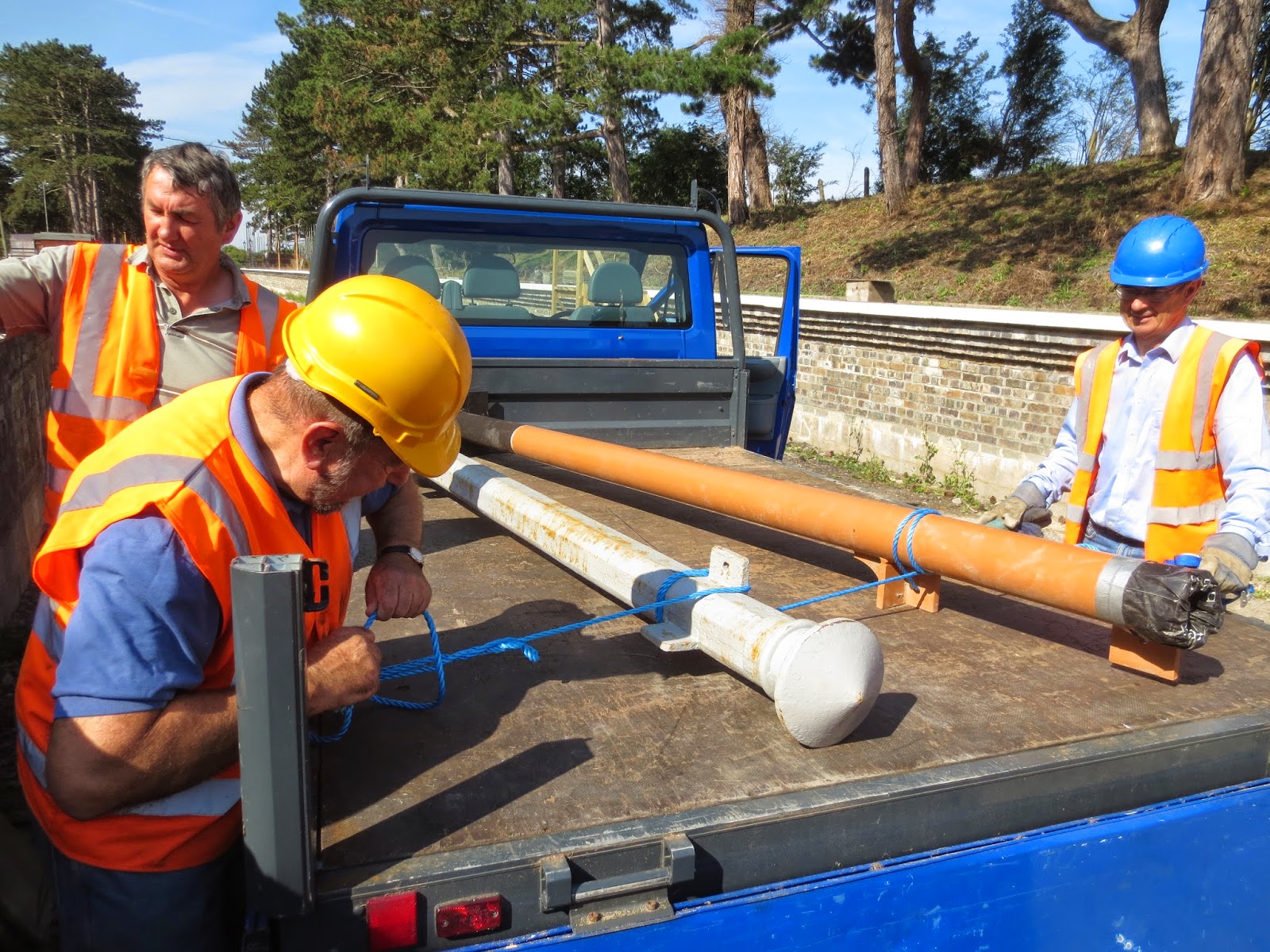 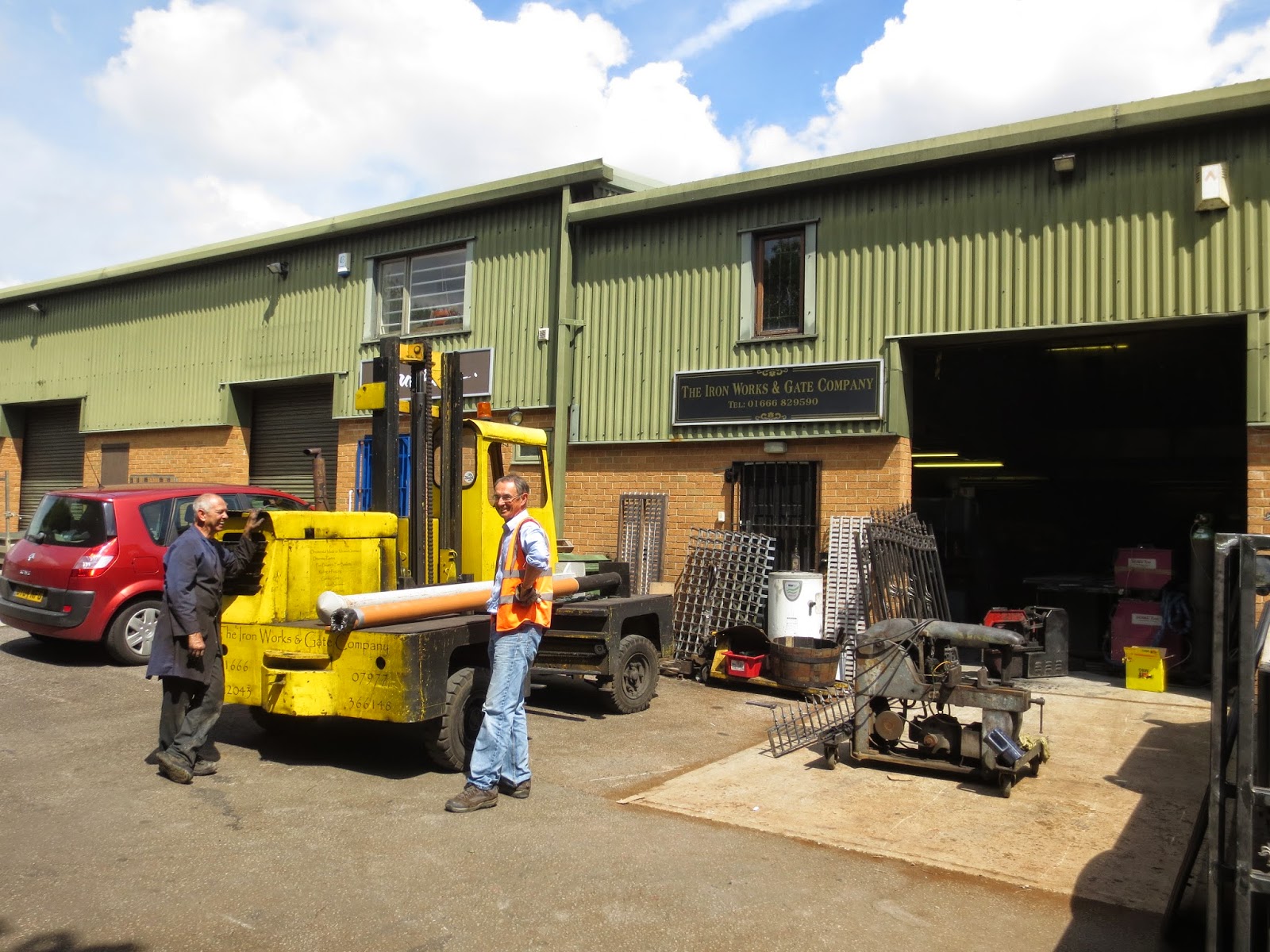 At Broadway, a group of 5 were drummed together to get the posts on board the truck – they are heavy! Thank you, guys!

Back on site, work continued on Platform 1C. 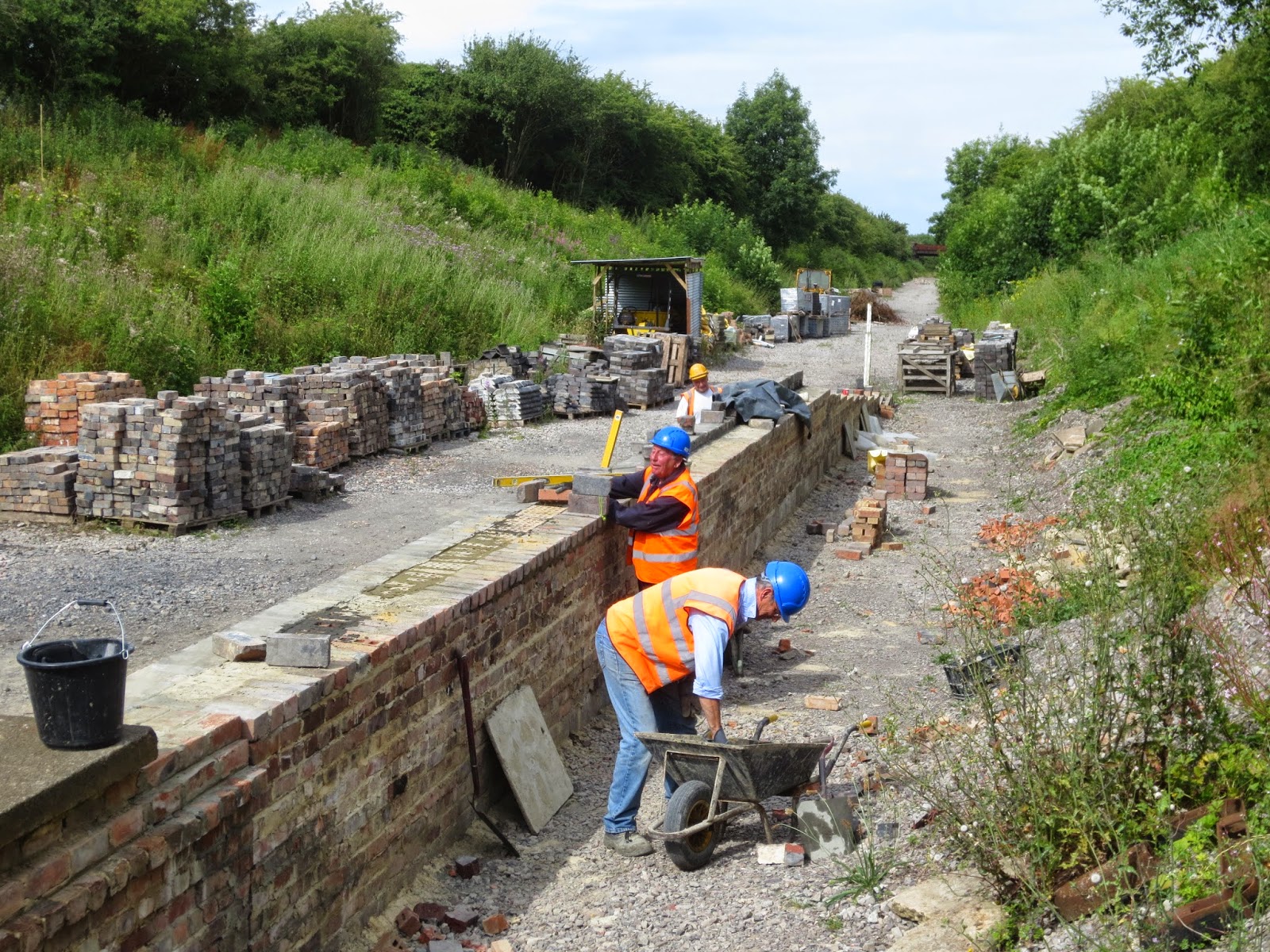 Clive, Roger and Brian kept the show on the road so to speak. As you can see there was no shade here and the bricklayers and brick cleaners (3 tied to the benches!) must have lost a few pounds.

Down on the drive work continued on the boundary clearance, Dave B, Dave H, Bill V and Brian (it has a ring of Hugh, Pugh, Barney Macgrew about it - but you have had  to watch Trumpton with your kids....) 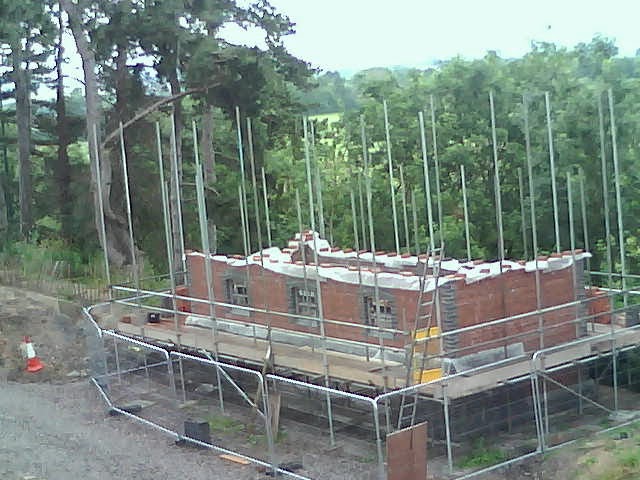 Last but not least BobW spent the day brick laying on the northern gable end of the Signal Box. This end is 3 course off the door sill  height for signal box access. The front is about 8 course off from windowsill height. Brilliant!

Jo was the Scarlet Pimpernel today, he went from Broadway to Malmesbury, then up to Broadfest and then back to the track bed, mining for GWR crocks! 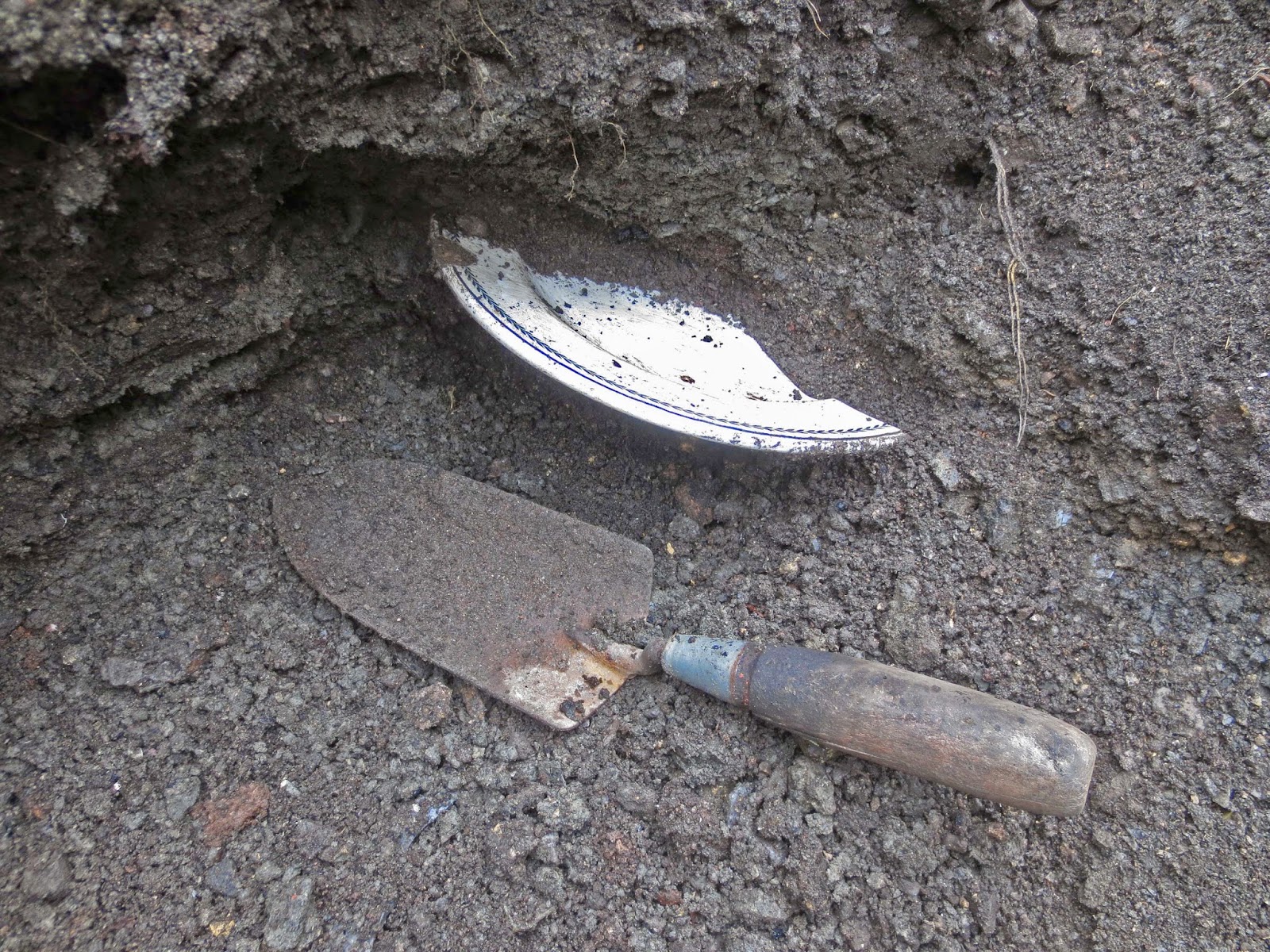 His efforts were rewarded however with half a plate!

Looking at the signal box (which is really impressive now) from the camera angle, you can see where the platform edging slabs end at present. Presumably there'll be a need to create a retaining wall and steps to get access into the lower room from the platform, but is there room around trees etc to also get a shallow(ish) ramp for wheelchair users? Appreciate there might not be many people with such disabilities in the S&T dept, but would be a great bonus if access could be made possible on open days etc. On that theme, I suppose it's worth asking how you'll handle the bridge works from a disability access perspective also. Some of the more recent bridges installed at stations have come in for a lot of flack for being over scaled engineering monsters with miles of ramps. How will you avoid falling foul of the same legislated requirements as the new bridge is, well new to Broadway, not really a repair to existing structures that might be allowable to continue under grandpa clauses. Perhaps a well installed track level crossing with trained platform staff? It's a very difficult balance to get right, everyone wants to do right by all needs, but it would be a shame to lose the character of the place with other solutions that could be imposed by local, national and European authorities these days. Keep up the good work, looking forward to opportunity to inspect it all from an inbound service in the not too distant future.

The sharp fall of the embankment behind the signal box means there little opportunity for a ramp behind the box or indeed anywhere else.

The crossing point for wheelchairs etc is the barrow crossing at the southern end of the platforms. These will be gated and manned. The footbridge is being installed using the HIA footbridge as replica of what was there before. It is on that basis that we are trying to avoid the imposition of any mainline type regulations.

If it's possible, please can you do a close up range of photo's inside and around the signal box, for all of us who are a little too far away to visit in person. Looking forward to seeing the scaffold lifted soon.

I'll have a go on Friday, if the weather permits. It's full of scaffolding, bricks, girders, not so photogenic.