The Wednesday Gang! The Magic Circle!

Difficult to find the right words to say what a great, hard working bunch of lads these are. Enough said! 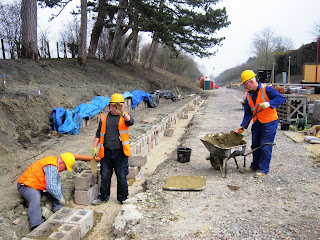 The main event of the day was the restart of building platform 2. The bricking laying team had been getting withdrawal symptoms and they were energised by the sound of the mixer going! Energy is whats required as the first part of the wall build is to lay 600 concrete blocks. The first course is always the most difficult because your laying the first course in a trench. 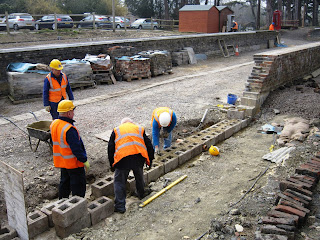 By the end of the day 117 blocks had been laid - I don't know whether this is a record, but it must have felt like it, especially to those who had been stacking the blocks in readiness for laying. There are about 80 blocks left to lay to finish off the first course and then the reinforcing bars are drilled and resined  in.


Up on the embankment Jo had identified the foot of a GWR post which were used for a variety of tasks around the railway, including running in board supports and modesty screens around toilets. The one in question was the latter from the gents on platform 2. The best efforts yesterday did not get the foot of the post out and remains a job for next week. The post itself, including a finial, were found during digging in the embankment  Jo has had some finials cast to go on the remaining  posts that we require on site. We intend to fabricate some posts if the real things don't turn up.

The posts are extremely heavy, as I can vouch for, as my voice is 2 octaves higher since lifting the end of one. We have Jo to thank for his determined efforts to find a  source to cast these finials and his major contribution to the cost. 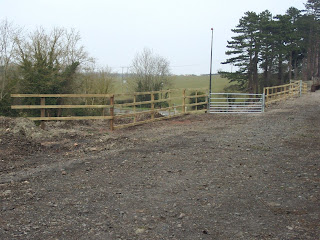 At the southern end of the site Jim, Roger an co. were finishing off the fencing by the slope. It is a job well done and to the many walkers who have been indisposed as a result, we are simply trying to prevent an accident happening.

Switching to the northern end of the site the lampposts cleaning continues and we now have 3 fine specimens to go up.

The site tidy up continues in anticipation of our open evening on the 24th May. (you are coming, aren't you? It's compulsory for all blog supporters in the county!)


Here, like porters on a safari, the lads shift and stack some old sleepers off the  station site on platform 1.

I suspect the P Way gang will scoff at the apparent number of hands required - I understand they tuck one under each arm....

A good day today, thanks to the brick cleaning gang and a welcome back to Ron Taylor who has been away for the past few months.


PS The power got turn off to the internet router  after I left yesterday so no on line webcam till Saturday  ... bugger...
Posted by Bill at 20:13

Great pic
The way this group works, in a couple of months, as if by magic, this pic will be a long way down the line.
Need to move everything on the left another 100 yards north!! (or should that be in Furlongs as the Racecourse seems to be interested in going to Honeybourne).
Great work, hope to see you soon.
Cheers!
Dave in California.
PS. Another donation coming soon.
PSS. The webcam is a great addition to the site! Just wish it was live video. I would be willing to donate to the cost of live webcams from any location on the railway, with active trains or not.