What an abysmal day weather wise. The weather forecast earlier in the week had been promising, but it wasn't to be! Nevertheless  14 volunteers started out with good intention of ignoring the rain and getting on with the jobs in hand. 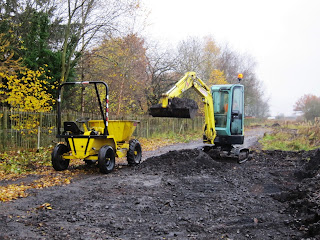 The only job feasible was to continue with the infill of Platform 2A. Here the mini excavator fills the dumper. Its on a day such as this that its a real advantage to have your excavator driving ticket - in the dry with a heater! 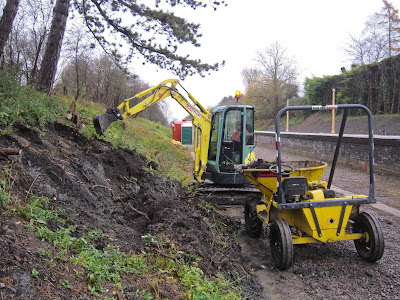 The ballast was loaded behind the main platform wall, and two courses were graded and rolled. When this was completed the excavator moved further down the track bed and filled the dumper with topsoil to go behind the rear slabs. 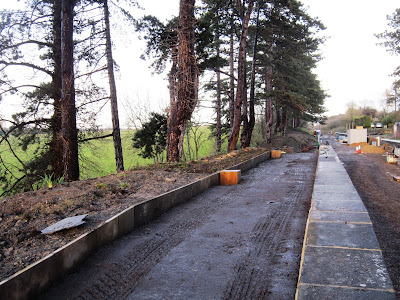 Eventually by 3 pm the job was done and very neat it looked as well!


To give an idea of the amount of soil shifted here is the interim state. It really was a  monumental feat. 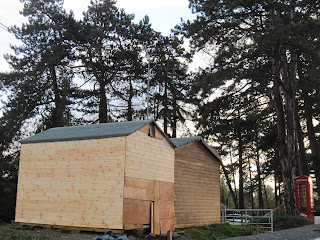 On the other  side of the track bed the Peters continued with the extension to the Shed. Needless to say they spent most of their time inside the extension! 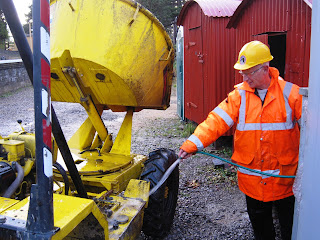 Last  and most important job of the day hosing down the trusty steed. By 3:30 9 of the volunteers had been washed down the drains, which left 5 standing! Well done to everybody who made it at all. It can't get wetter than this (can it?).

Addendum :Not forgetting Rod, who spent a long time with a pickaxe, working all over the site, making sure that most of the pooling water found its way into the central drain. At least all the rain confirmed that the drains work well!
22 November 2012 06:57

Not forgetting Rod, who spent a long time with a pickaxe, working all over the site, making sure that most of the pooling water found its way into the central drain. At least all the rain confirmed that the drains work well!

Boy did it rain! The Wednesday photo's don't really show how wet it was until late afternoon, unlike the Saturday photo's.

On my trip home, I had to turn back on 2 roads as they were not passable, I was stopped by a kind lady who advised me not to go under a railway bridge as there was already a car stuck in water under it.

I must have driven (very cautiously) through about 6 flooded sections of road trying to get home and admit to getting a bit worried!

A normal 45 minute journey took me an hour longer. I hope the weather is better next Wednesday.