It rained and then it rained some more, but it made no difference to an enjoyable day at Broadway! Eight of us did our best to tackle the two main jobs on the to do list.

The main task was to put a further layer of hardcore behind Platform 2A. We are running out of useable hardcore on site and so the troops went down to collect the remains of the ex Honeybourne bricks and brought back everything they could. 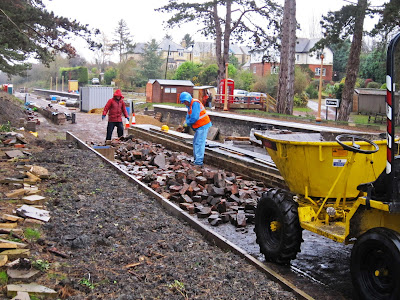 The hardcore was then man handled into a single layer, prior to more ballast being placed as the final layer on Wednesday.

The job of spreading the bricks was virtually completed by the end of the day and everyone went home tired, wet, but happy.

Marguerite's Shed got the final "knock through" of the adjoining wall and she'll be laying the lino next week! 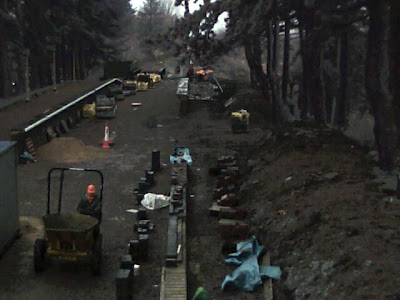 The end of the day scene as the dumper heads "home"

Finally thank you to David Courtney who call in by today. David is a great supporter of our work at Broadway. David is key player in the Friends of the Cotswolds and realises the great benefit the opening of Broadway Station will bring to tourism in the region.  David was accompanied by his son Simon, who will be a keen supporter of the Railway for many many years to come!
Posted by Bill at 21:26