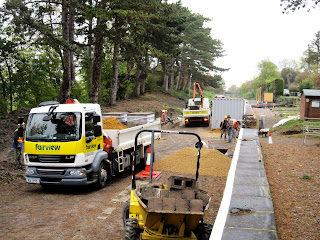 A marvellous turnout of 21 Volunteers today and good progress was made on a number of fronts. The day started off with a number of deliveries and there was a good deal of maneuvering to in order to get the right materials in the right place. It all worked out well in the end! 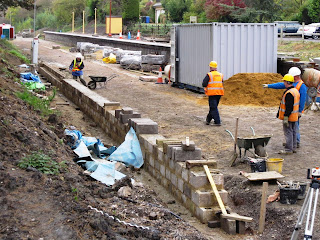 The main focus was to continue the block laying on Platform 2. The end of day statistics supplied by Jo were as follows:-

Approximately 20 small blocks laid on top as a start on the next course.

This was no small achievement and the rather telling statistic was that all 20 bags of cement were used.

Steady lads - we'll have to raid the piggy bank! 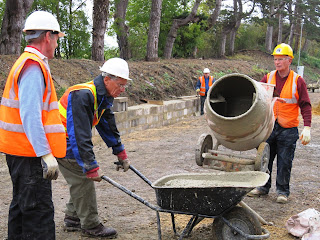 One of our many volunteers today was Ron Taylor - pictured with the barrow and fellow volunteers  Tony and Paul. Ron, who lives in Hong Kong for part of the year, has visited us regularly during the summer, and has worked extremely hard on the most arduous tasks. He is a very pleasant gentleman. 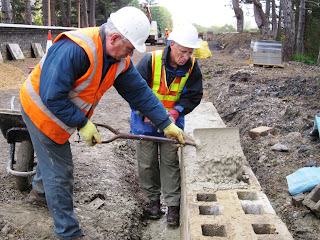 He is back off the Hong Kong until next April but I am sure we will see him on his return. Thanks for all your efforts Ron. 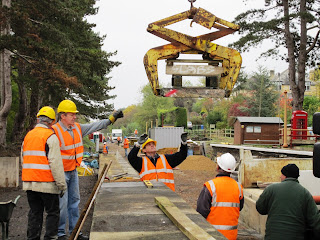 Not to be out done the slab laying team were back in action today. Richard from Fairview has quite missed his slab laying trips. a record total of 16 slabs were laid today, level and true, on platform 2A. We are now looking for slab sponsors to allow us to finish off up to the Signal Box area. I am sure we will get there with your help.

Richard just manged to squeeze in the transfer of some Ashchurch rubble behind 2A. This was spread during the afternoon as another layer of infill. 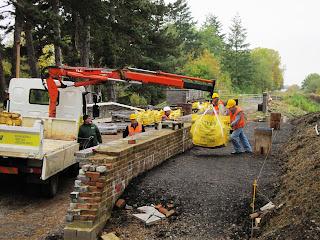 You can see the lamppost sockets in place, ready for the ducting to go in, in the next week or so.

Gordon and Dave worked away at fighting back the undergrowth on the south western embankment.  The Summer rain has made this doubly difficult - we are almost back the level of vegetation this time last year!

The carpentry team, the two Peters, continued with the extension to Chez Marguerites  Another couple of weeks and it will be finished! More photos next week.

Finally David and Chris continued with the Wisley brick cleaning. They will be pleased to see the fruits of their labours being used on Platform 2  next week!

A thanks to a Smiths Aerospace work colleague Phil Collins and his good lady who paid us a visit today.
If you've flown on any Boeing aircraft, you can thank Phil' s genius for getting you safely to your destination.

PS Out of sight out of mind!
I forgot mention Graham and Mike who went over to help Building Services paint the Flag and Whistle. Ron Briz sends his thanks!
Posted by Bill at 20:23