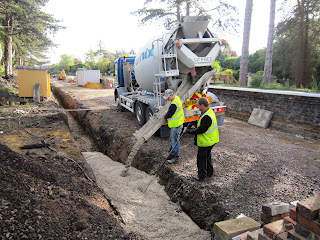 Having excavated the Platform 2 trench yesterday, today was the day for carrying out the concrete fill.  Although this seem pretty mechanical and straightforward, raking and tamping  to the final level is backbreaking work. Thanks go to Jo Roesen  and Tony Boucher, who attended all day to help Steve and co.!

Here is a Jo Roesen video of the pour.
Concrete on the move 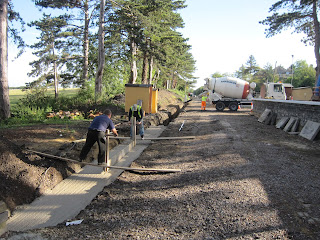 The job was finished after lunch and looks pretty spectacular. 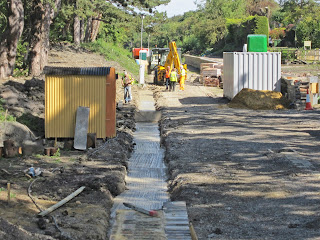 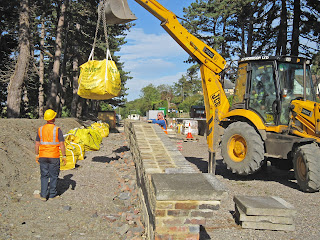 There was time also to put some of the broken bricks from Ashchurch behind the 2A wall. Here Tony steers to load in over the top of John Crawford, who's hard hat seem to be missing again. 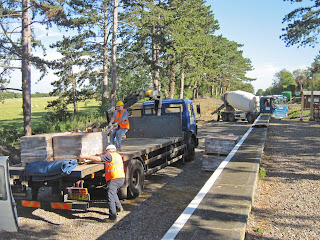 Terry and Paul managed 2 lorry loads of bricks and rubble from Ashchurch. Here the pallets are unloaded in front of Platform 1A. Having started at 7:30 in the morning, some sort of medal is in order I think.

Have you guys ever heard of a thing called a day off?? Reading this blog makes me feel really lazy. Great work tho guys.

Bill you and the team at Broadway are setting a cracking pace.

Bill and the gang, with the progress being made, Broadway will soon looklike the photo (page 21) in Audie Bakers book 'The Stratford on Avon to Cheltenham Railway'. Fantastic progress. Well done everyone.