A great day for tidying up loose ends from Wednesday  and Thursday and a great deal was accomplished.

Ashchurch
I quite wrongly keep putting the Ashchurch activity at the end of my posts as though it was an afterthought! Well it certainly isn't and some great work has been completed there both on Wednesdays, and  Saturdays (when Andy and Bob Jones have toiled away on their own). Today the final piece of the wall was taken down - what an achievement. A small retaining wall has been left for the moment  to stop any spill over of mud in the wet weather. Work also started on taking up the blues in the flooring, and first impressions are good! Cheers Bob and Andy! 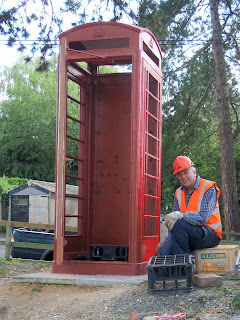 Back At Broadway Jo gave the K6 Telephone box its first coat of  red paint and very fine it looks too! 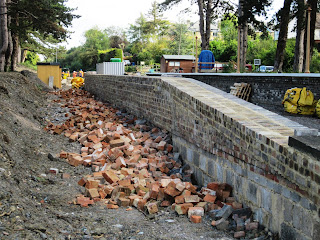 The demolition of Ashchurch has left us with a good deal of spoil, not through careless demolition but the bonded bricks had a good deal of half bricks (snap headers?). these we are layering as infill behind 2A. They will be levelled and graded before more ballast is put on top. 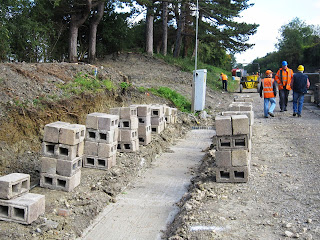 The new stretch of footings on 2A would do justice to the new runway at Heathrow. Here we see blocks being stacked in anticipation of wall building a week on Wednesday. 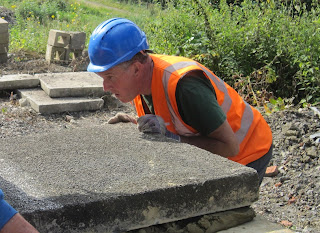 Finally Jim Hitchen drew the short straw to help reset a coping slab. It does make the eyes pop out if your not careful Jim.

not as good as St Pancras International