15  Volunteers turned out today and what a day it was! 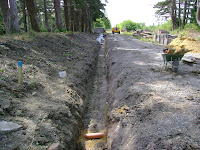 This week we were determined to complete the next 75M of footings for platform 1A. By Wednesday close of play it was done. A small group of volunteers. led by Ron Briz. have turned out each day in support of Graham Morrison's team, who had been commissioned to do the work.  This consisted of firstly pulling out 70M of old GWR foundation. This was no small task, the concrete having been mixed with granite chipping and a few rocks thrown in. (you could have probably have built a block of flats on them, but they did had a twist, so out they came!) 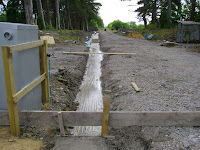 Platform 1A has a  curve in it which is a feature of the this section of line - its effectively one long curve.  Having removed the old footings the platform wall off-sets were re measure for one last time and away they went! Six loads of concrete later the job was completed. Well done to all concerned - I could describe individual heroic stories but at the end of the day it was a team effort. Brilliant!
Two other teams were working today. Steve Bucknall arrange with Clive Hawkins (P Way) to retrieve 30 sleepers from Stanton Yard. These were delivered with the  invaluable help from Fairview (nice to see you back Richard!) and work has started on building a retaining wall adjacent to the new fence by the B&B.
This is both functional and aesthetically pleasing, as we start to give the station site some  authenticity.


Last but not least a team continued to retrieve blue bricks from the Honeybourne 'pile' on the Childwickham Road. (the slabs will come over from Honeybourne shortly). These bricks are invaluable. It has given a ready source of blues and reds which are virtually clean and ready to use.
Lastly, thanks to all the visitors that came today. your interest and words of encouragement are much appreciated. Thanks also to Nigel Black who came up to gives us some advice on track laying matters.
Posted by Bill at 09:58

Wonderful! An outstanding effort once again by all concerned. I'm really looking forward to visiting Broadway next month.

I hope this may coincide with the troops being on site - they have a good story to tell.
Bill