Saturday - Despite the dark days being experienced by the Railway, with a second major landslip to contend with at Chicken Curve, the Broadway Troops press on with the work in hand. Broadway remains the light on the horizon for the future success and profitability of the Railway.

Much hard work was expended on all fronts. The fencing gang continued with the car park fencing at Childswickham Road and I have say it looks pretty good! One more good session should see it completed and work can start on levelling and landscaping the car park. 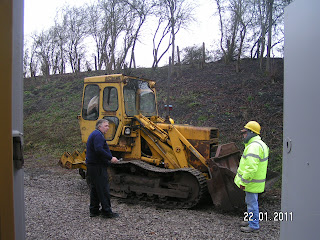 Dot decided to help out today also and heroic work by Steve B saw four large loads of ballast but behind the platform wall, ready for levelling and rolling. Here Bernard D is sorting out a problem with a track. (Nice jaunty hard hat modellingl Ron!)

Last but not least Any P and Peter set-to on with the northward embankment clearance. We be able to see Honeybourne before you know it!
Posted by Bill at 10:25