A fine but breezy day today saw the volunteers split into three groups:

- A small group went to the recruitment fait at Toddington, to man the Broadway stand. We will be there again tomorrow, so do come along if you've ever wondered about joining the railway. This is your chance to check us out.
- A second group spent the day on the box, busy with the T&G boarding on the roof. This included your blogger, so that's why there are several photos of this activity. 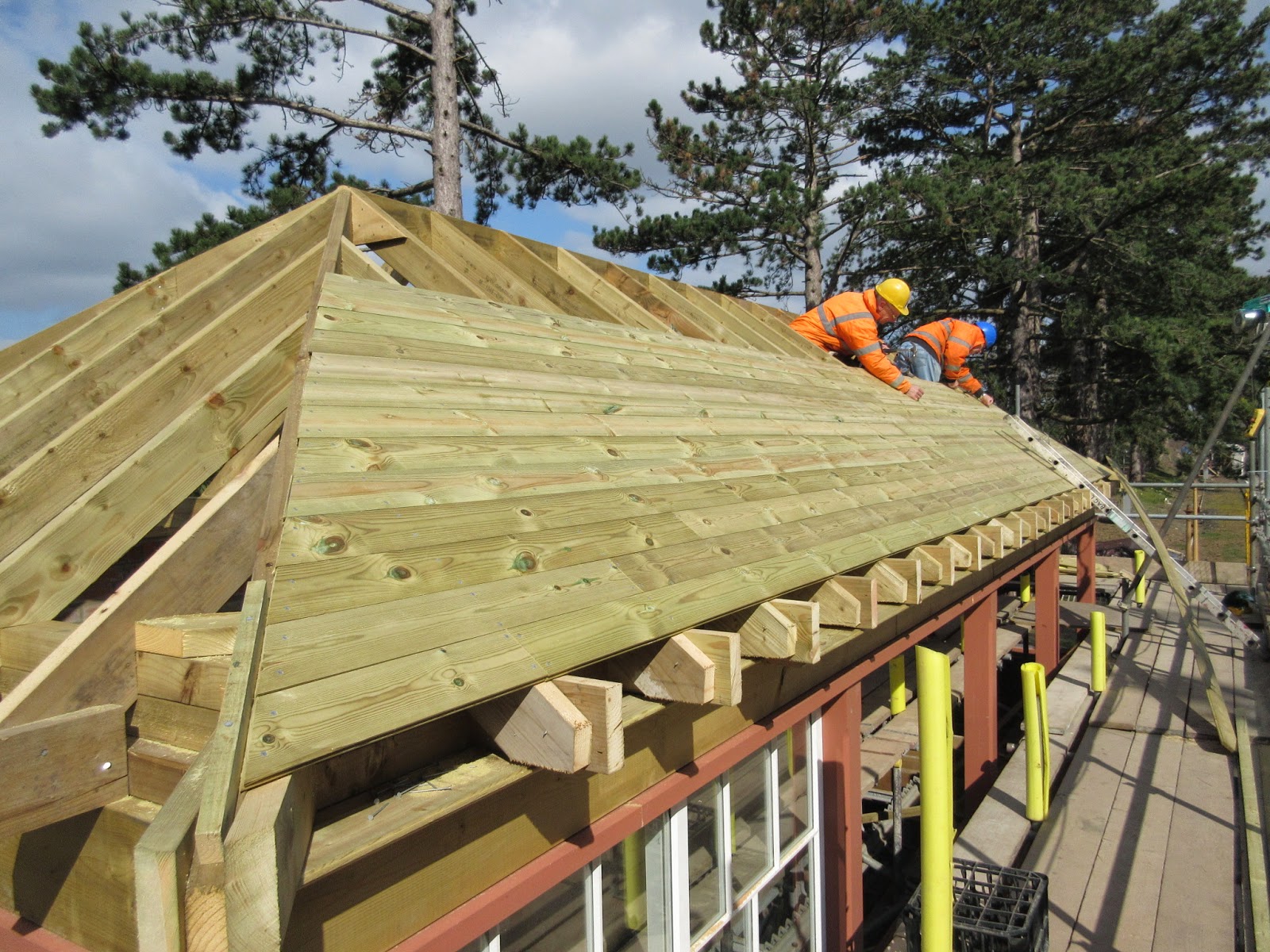 In the previous session, the first 4 boards went up on the front. Today we continued this, with Tony and John S doing the sawing and hammering. 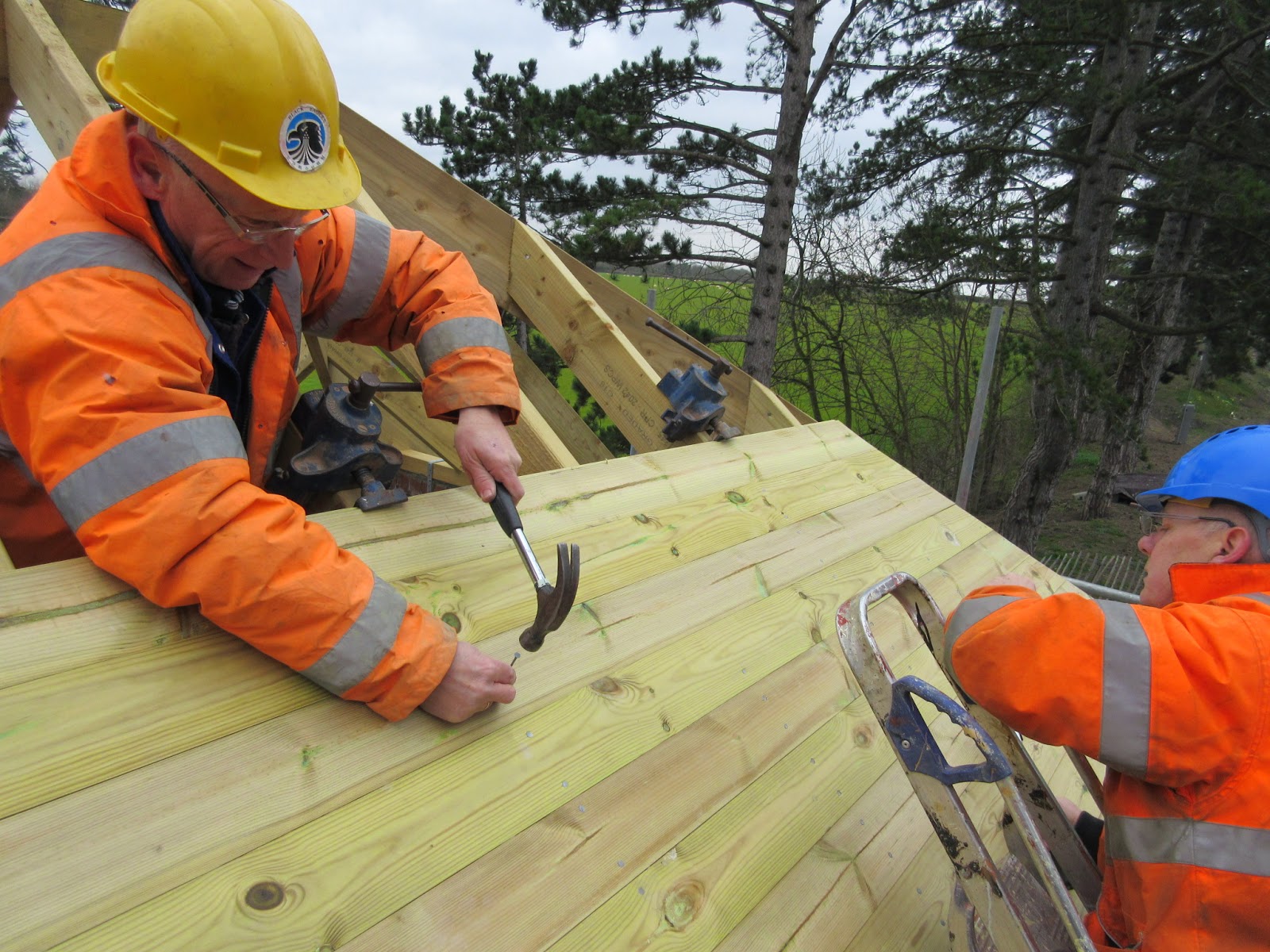 Here is a close up of Tony and John at work. The boards are cut to size, then pushed down into the grooves with the little vices you can see in the picture.
We shall gloss over the number of fingers hit with hammers... 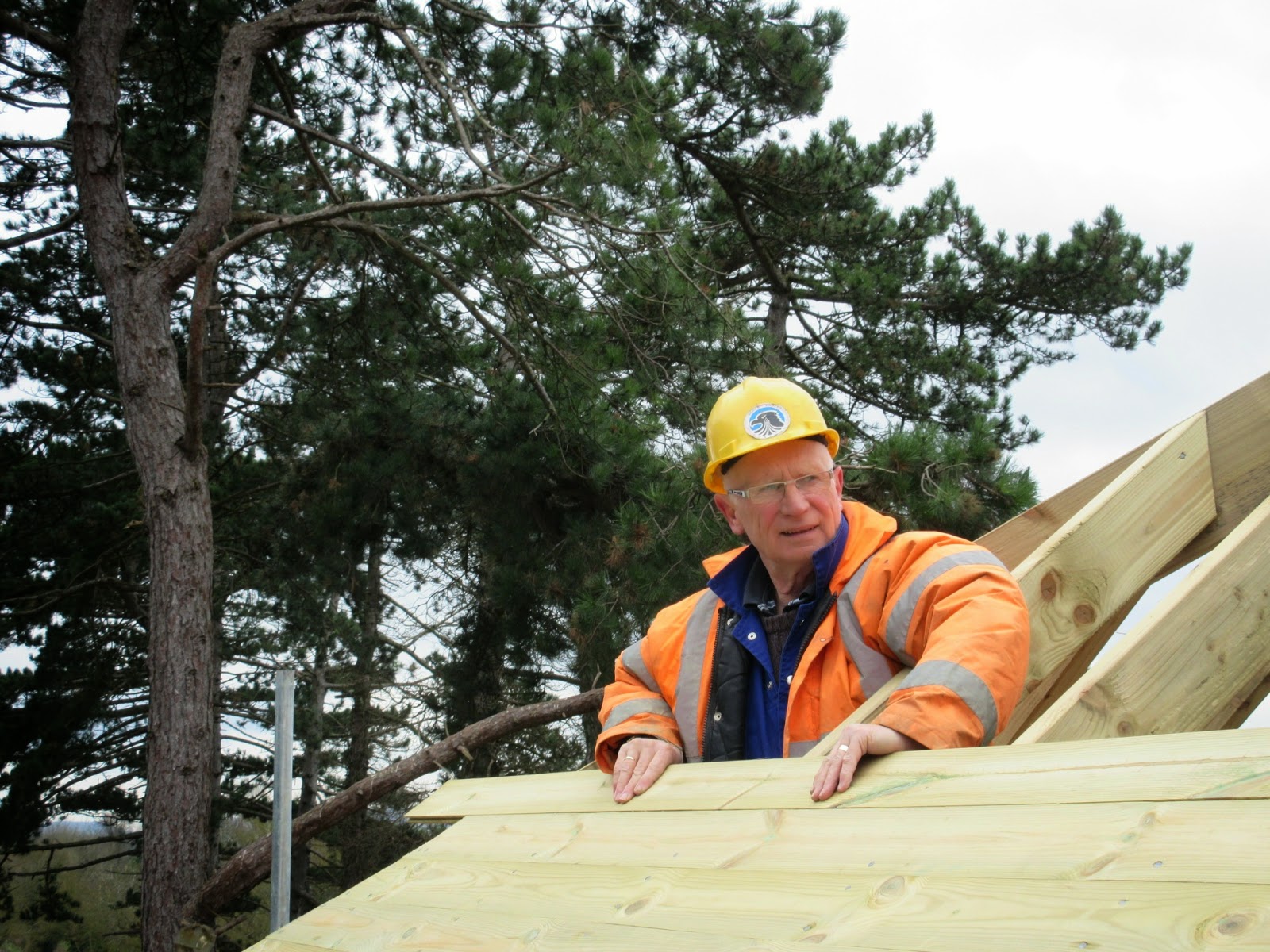 As the number of boards in position increased, work had to be switched from the outside to the inside. Here is Tony emerging near the top - you get a great view from up here. Can you see me, mother? 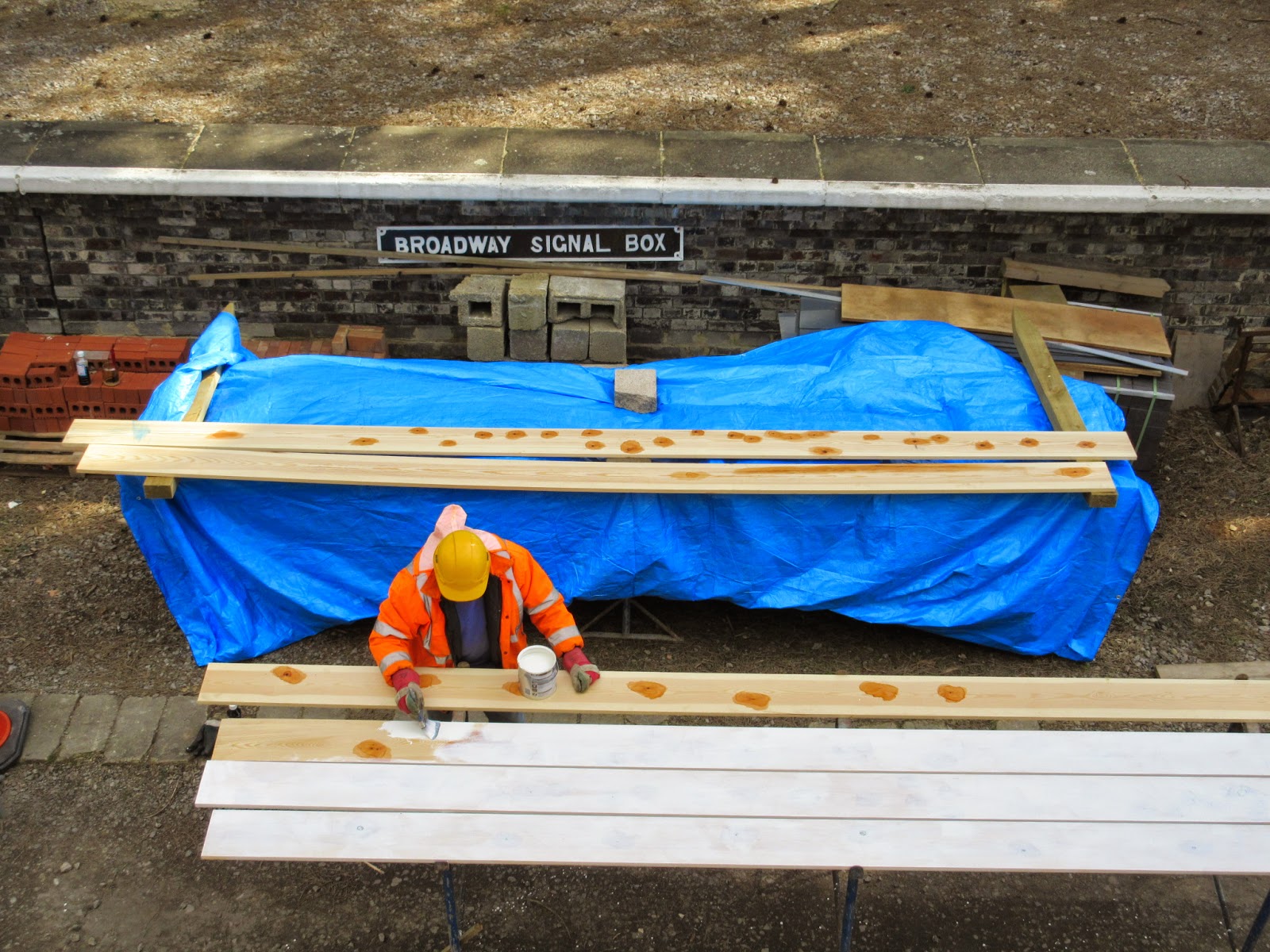 Way down below Peter K was treating the future fascia boards with a knot sealant, and then a layer of primer. Behind him is the stack of T&G boarding, which got a lot smaller today. 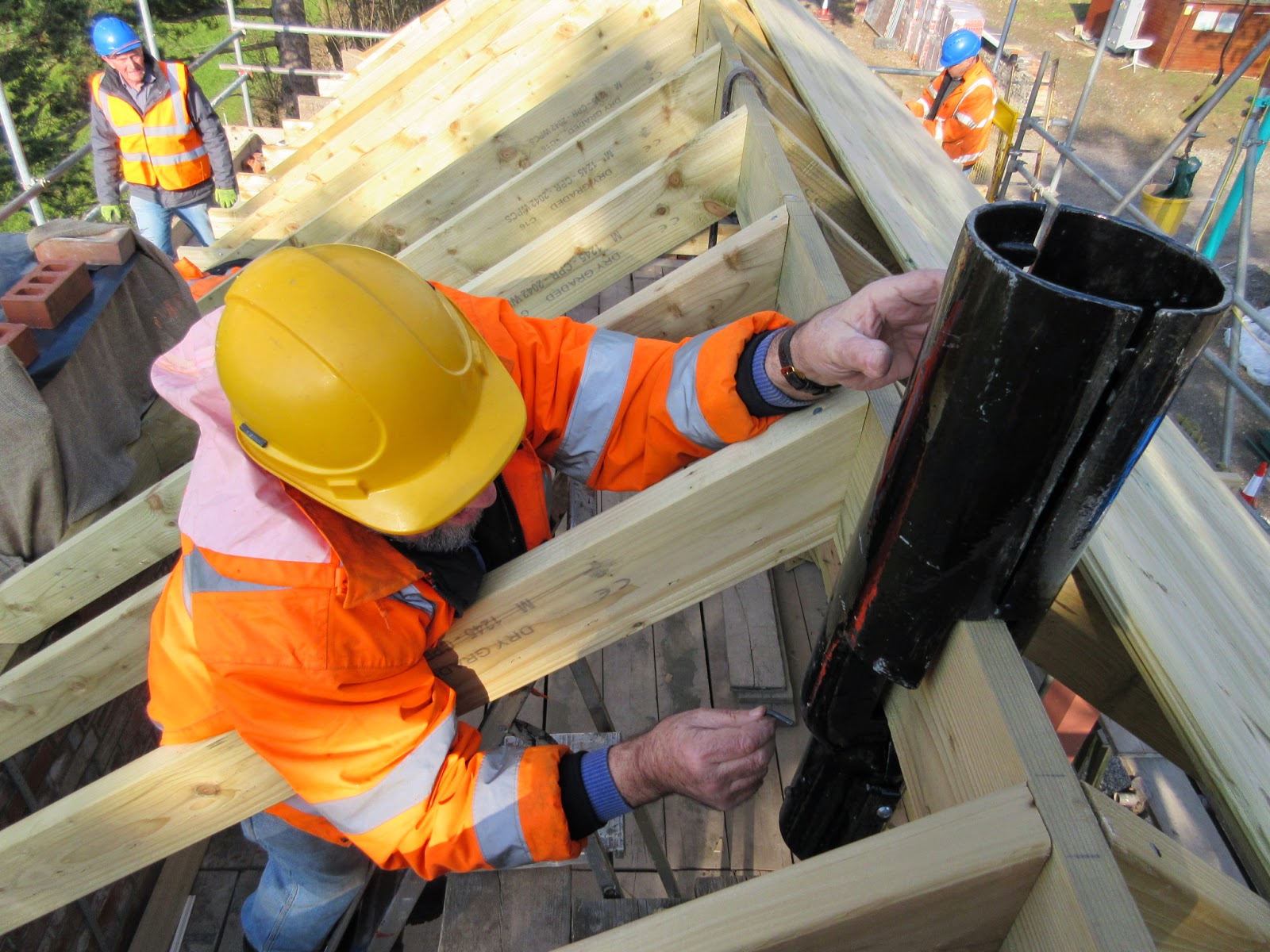 The best bit of the day (for your blogger at least) was the moment when we were able to add a genuine piece of GWR railwayana, while at the same time reaching the highest position to date on the box! This is one of two GWR ventilator tubes, originally from Exminster box. They are made of cast iron, and clamp around the board running along the apex of the roof. Over the top goes a zinc ventilator, while underneath is a funnel, whose purpose is to ventilate the fumes from the oil lamp underneath that lit the box. Luckily we have a photograph of Shirley box in the cabin, which allowed us to pinpoint their required location exactly. Over tea, of course. 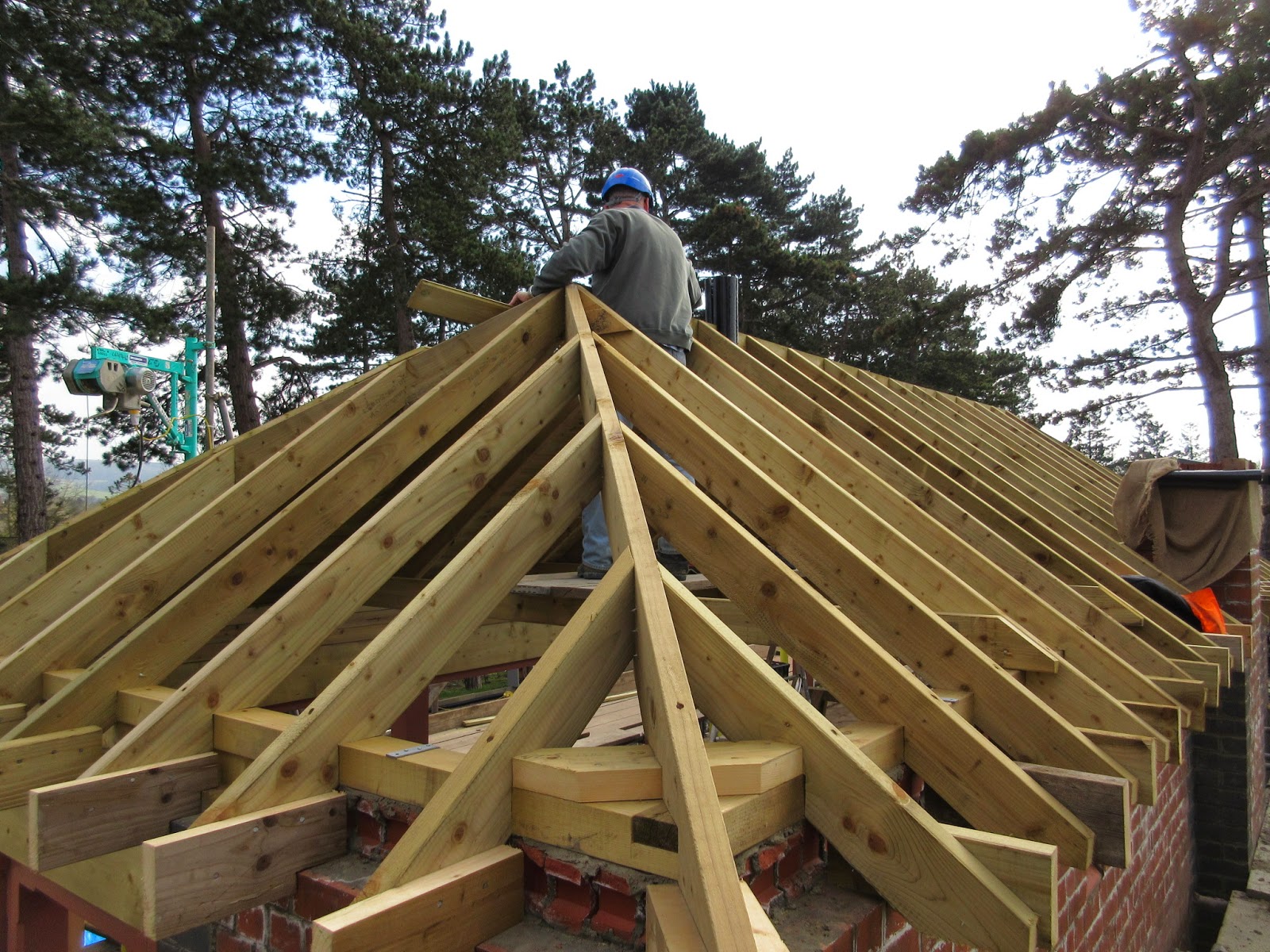 As we got near the apex of the roof, John and Tony had to switch position to the other side, and work from above. On the right is the stub of the chimney which is awaiting a scaffolding lift, due next Wednesday. This should then allow us to finish the brickwork on the chimney, remove the scaffolding just lifted, and finish off the boarding on the rear. 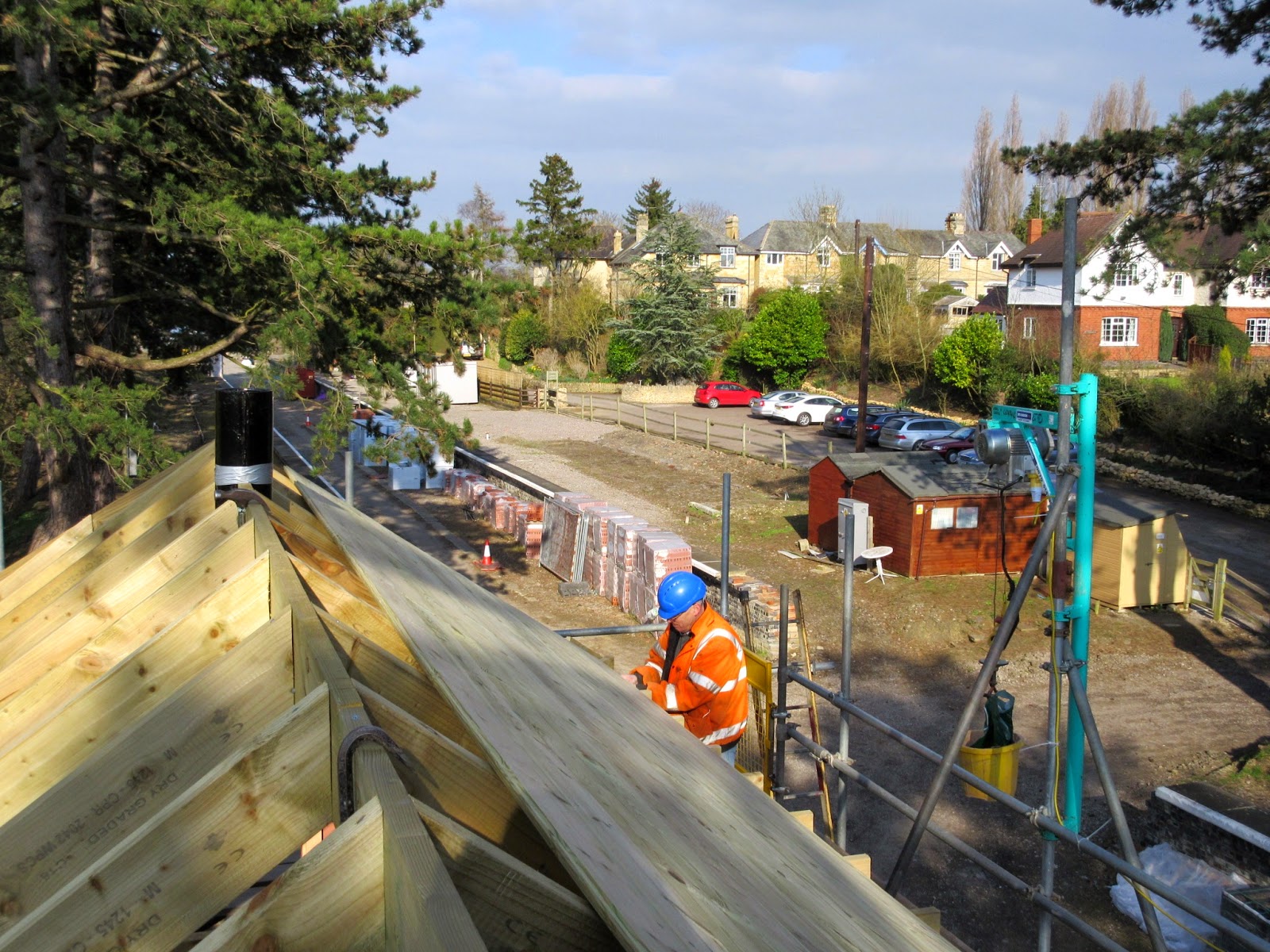 This is as high as we got today - two boards short of the top. All the boards are securely nailed down, giving a very robust structure. A layer of insulation is next, followed by the battens and the slates. We have not yet sourced these. In the background is the site for the station building.

- A third group today worked at the other end of the site, near the Springfield Lane overbridge. On Wednesday work had started here in clearing out the drainage inspection pits, and this work, together with further burning of brash, continued with some success today. In the morning we were delighted to see Andy P from the drainage gang with the B&S van filled with concrete rings to extend the height of the pits. 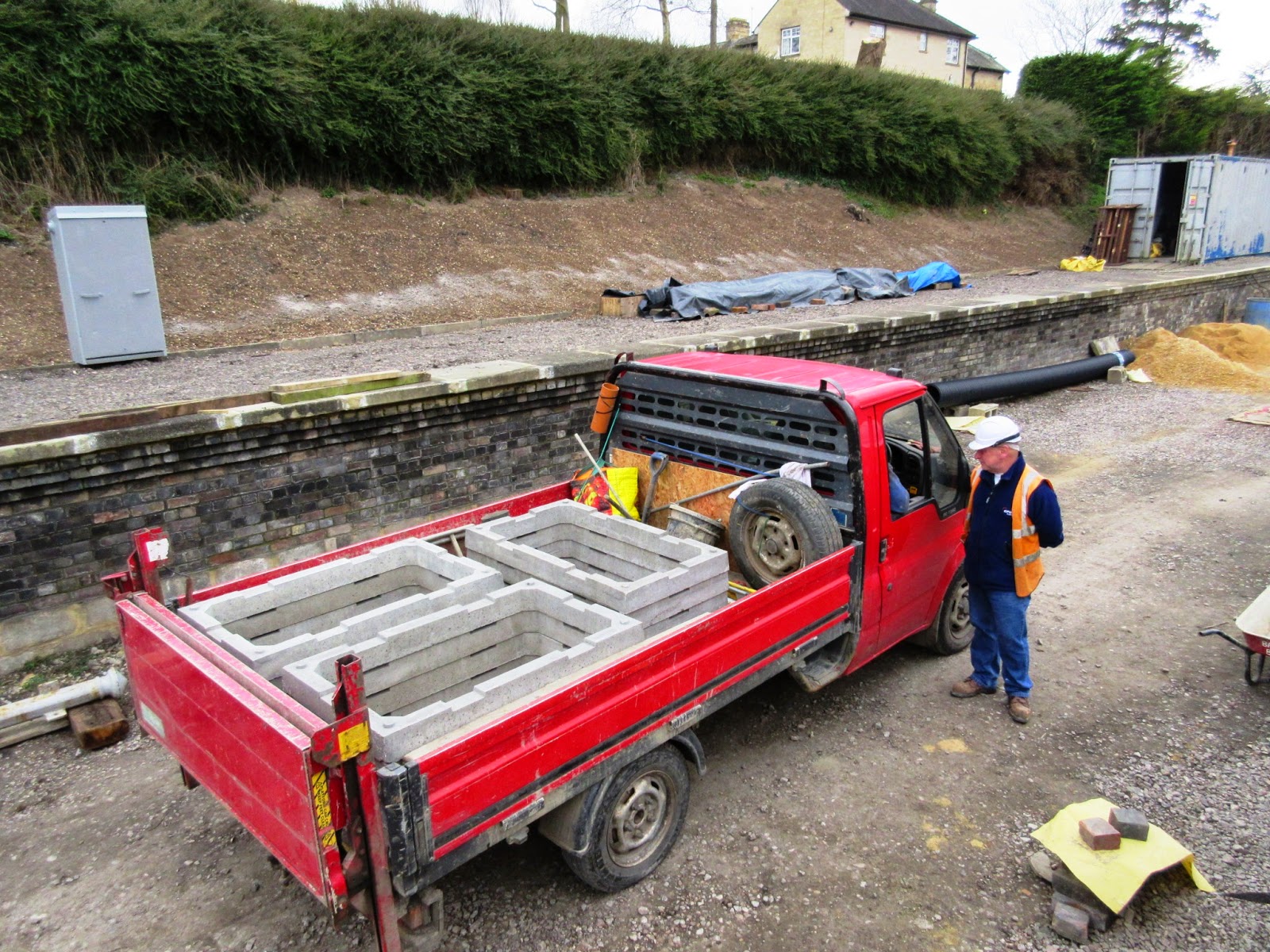 The timing could not have been better, as our pits had been filling with all sorts of rubble due to their insufficient height above ground. Thanks, Andy !

On the drainage work at the north end of the site, this report from Jim H:

Just a few details from the drain clearing efforts earlier today.  Initially Robin and I wheeled the 330 metres from the bottom of the platform ramps to the northern boundary fence, and have recorded the actual or approximate positions of the 12 pairs of catch pits.  These have all been numbered.

Rod, Steve, Clive, Keith G and our visiting experts from Lineside Drainage, Andy P and Stewart then spent a very tiring day digging out the pits starting at the northern end.  It was amazing to see a pit filled to the top at the start of the day with stones, ballast and vegetation, which when removed, then suddenly filled up to a depth of about a foot with water.

Clive also managed with Robin's assistance to get a bonfire going and it was also necessary to move two pallets loaded with S & T concrete troughs and lids to gain access to one of the pits.  By the end of the day nearly half of the catch pits had been cleared out.

Andy and Stewart then delivered and fitted new drainage rings to seven catch pits. All those catch pits which have been cleared have been fitted with temporary lids. There remain five locations where a mini digger will be required to excavate spoil in order to find the missing pits.

Dave B went off to the north to find out where the water will go to once the centre drain is connected in.  The bad news is that there are another twelve pairs of manholes to clear up to the by-pass bridge and the nearly as many again to where the drains appear to leave the track bed.  None of this is on land owned by the GWSR.  So an interesting problem for the future. 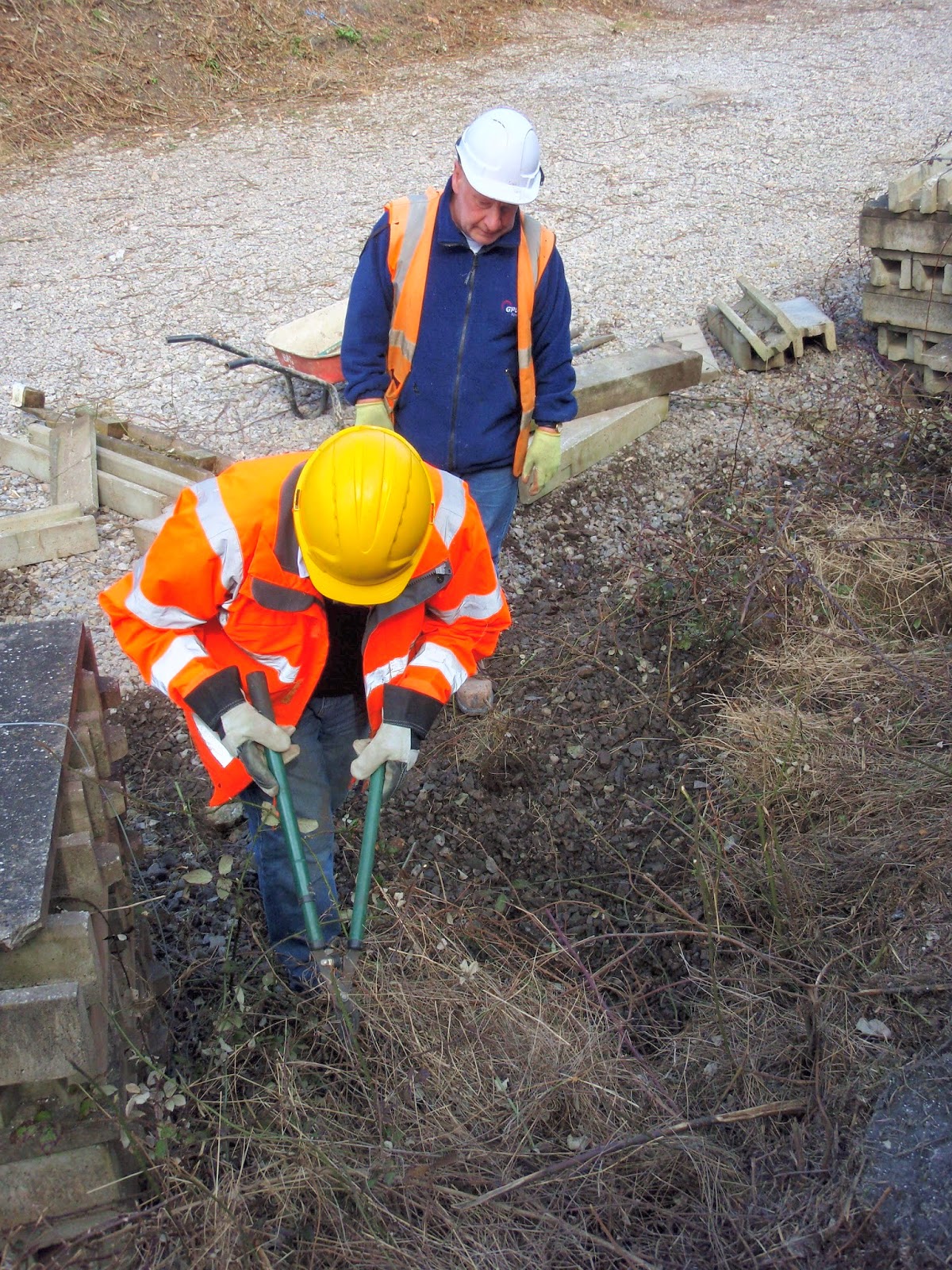 Here are the pictures that go with Jim's report. This first one is of a trial dig to find one of the catch pits. It's not just a question of emptying the pit of a few shovels of ballast. Sometimes they have been completely filled in, or even buried and lost from sight, such as here. We can only guess its location by measuring a standard distance from the last one. 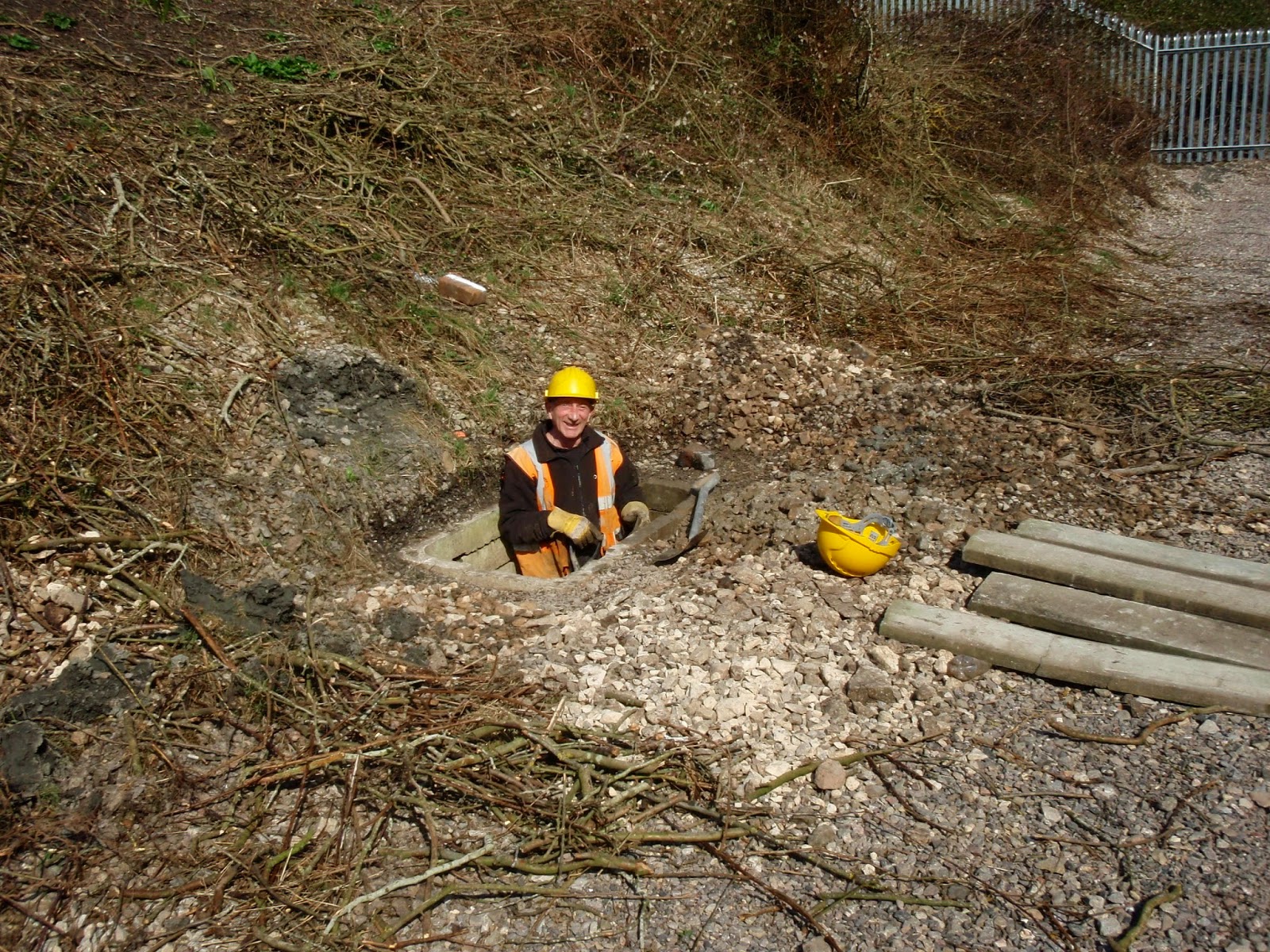 When you have found your pit, put a man in and tell him to dig deep. This one looks like a very deep pit.... 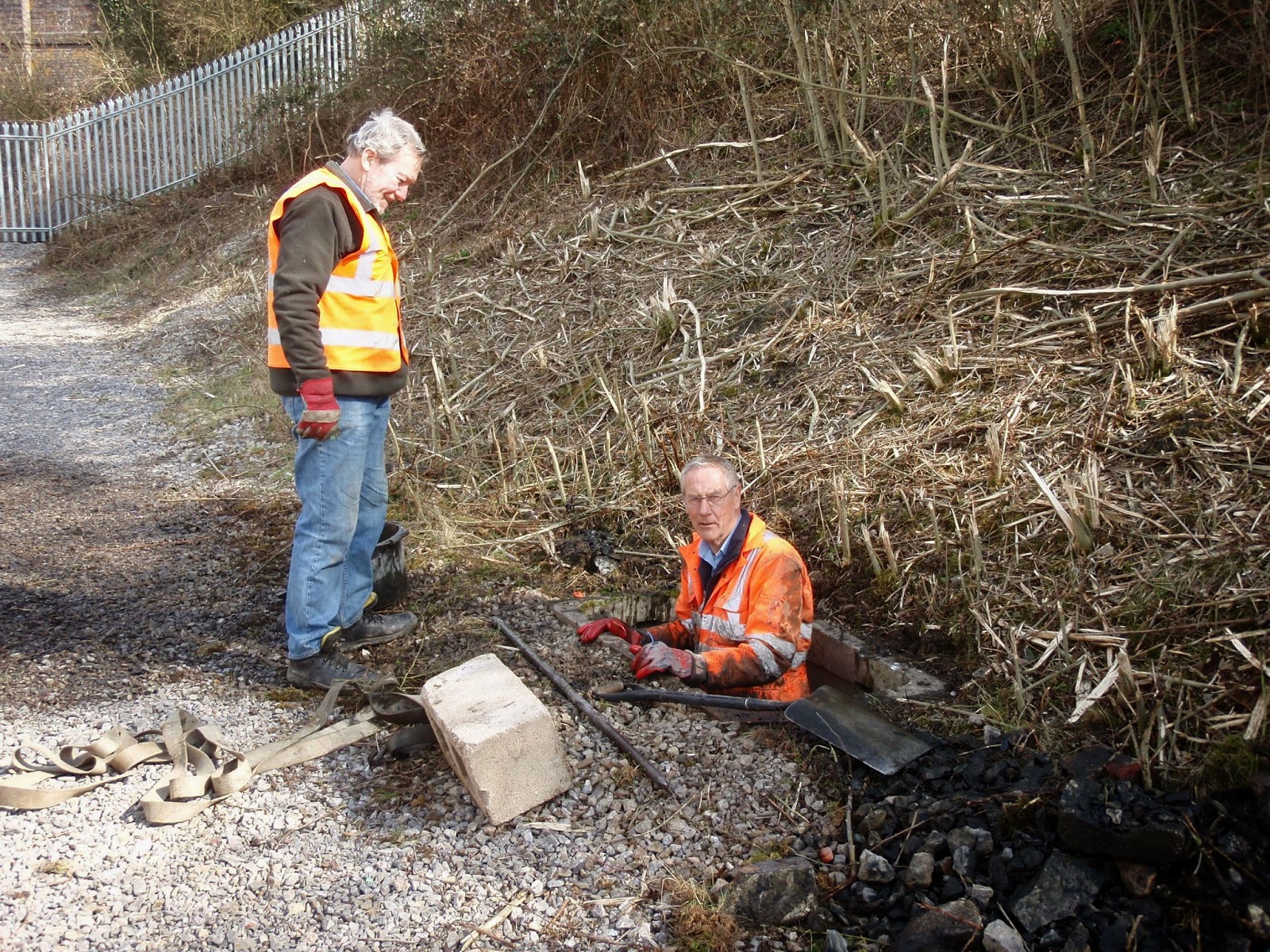 Here are Rod and Stewart and  with the classic tools for clearing a pit - a shovel, and a bar. These pits can be quite deep, and in the bottom there is a sump that is precisely as deep as the top of your wellingtons. You move, they fill. 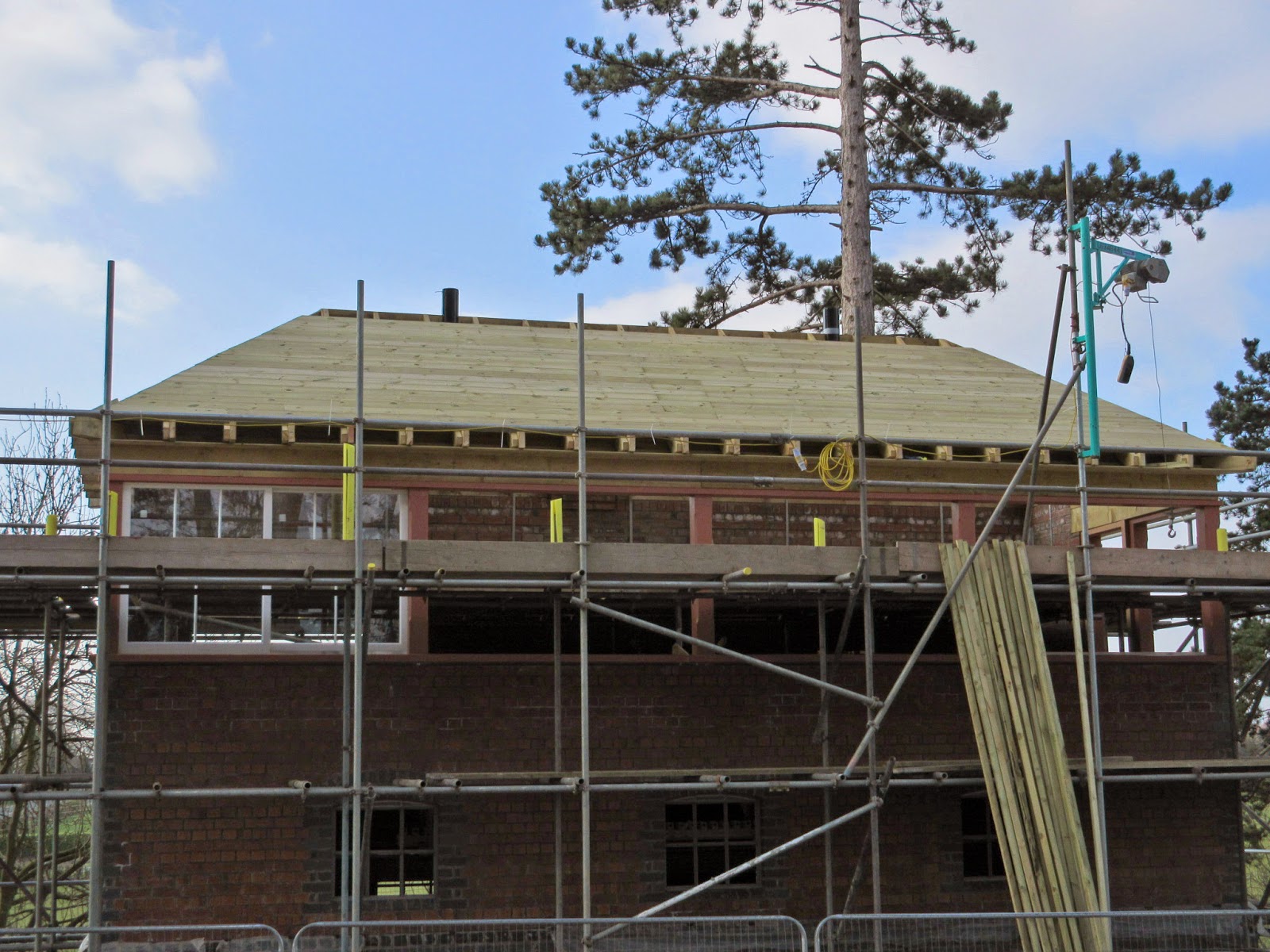 Finally, a look at the signal box at the end of the day - T&G boarding almost up to the top, and two ventilator tubes fitted. Next time, we shall address the ends (depending on the then prevailing wind, it will be either the northern or the southern one, it is very windy up there!
Posted by Jo at 19:30

Smashing progress on the SB! I assume from what you write that the rafters and roof joists are left open to view, i.e. there is no ceiling inside?

I always wondered where the drains ended up- would they go onto Sustrans land? And they do!

Good to see you give a mention of Andy Protherough's team. A bit disappointed that this and the GWSR other blogs don't give a link to his Flickr blog, which is tremendous and shews the amazing work they do.

This is the link,

Hope you will consider bunging it up there, thanks for your own great blog.

I love the drainage blog

Sorry apologies, I know gratuitous suggestions are not always welcome, but we need a facility on GWSR blogs that give a gift aid contribution facility where one can specify to which project you wish the money to go on an where you can relieve us of our cash, like eBay and Paypal, as easy as winky - just a click, as it were.

Perhaps this could be passed onto the central accounting team as an idea. Apologies if it's already there and I missed it. I did contribute to the bridges appeal but I suspect that was a different system.

Peter,
Yes, the rafters and boarding inside are left open to view. In the roof space thus exposed hang the oil lamps - have a look at Winchcombe box for example.

If the sarking on the roof is to be seen from underneath, and you don't want a sea of ripples where it swells if it gets wet, I hope you're fly battening it in between work days till you at least get a vapour barrier or felt on? Be a real shame to waste all that timber and work if it got soaked, I've seen it happen many times, lifts like a pig and you never get them back, for the sake of a £30 tarp.

Hello Bill,
For what reason has the Broadway budget been so drastically reduced, are there issues elsewhere on the railway?
Surely such a cut will delay opening the extension.

Cant wait to return to the station to see all the great progress you and your colleagues have made.

Well done again to the folks at Broadway for pressing on and making such good progress. I'm also a fan of Andy Protherough's drainage site and it shows only too well just how much work went into drainage on the line and just how much needed to be done and, because of years of neglect, still needs to be done to keep the line "healthy". I think tin1 nit2 only needs to look at the various blogs, especially the drains blog, to see where money is going to answer his/her question. All that drainage work alone is costing a great deal I'd imagine but worth every penny! Running a railway costs, never mind extending it at the same time. We need to reach for our wallets, as HowardGWR suggests! Looking at that signal box even in its unfinished state shows that it'll be worth it.

Andy Protherough's drainage site is already linked on this page. It's the first tab marked "Drainage Blog", and has been for a few weeks, since it replaced the Bridges Blog.

And I agree, it is excellent too.

Eric
Thanks very much, where is my red face smiley?!

Just a comment on the Broadway budget - our original request was accepted in principle, but once all the budgets were in there was a shortfall in respect of general infrastructure maintenance - not enough loaves and fishes to go round. There is only one greater priority than getting Broadway finished and that's having a Railway to run to it, when it is finished!

That why the Broadway Project needs as much financial support as it can get, from you our valued friends.

On the question of the potential risk of warping or swelling, all the wood we use is tanalised and its our intention to get it felted up as quickly as possible.

Other questions have been answered by observant followers.

My thanks to Jo for 2 great blog posts this weekend.