The Wednesday Gang and a Great Turnout on a Cold Day! 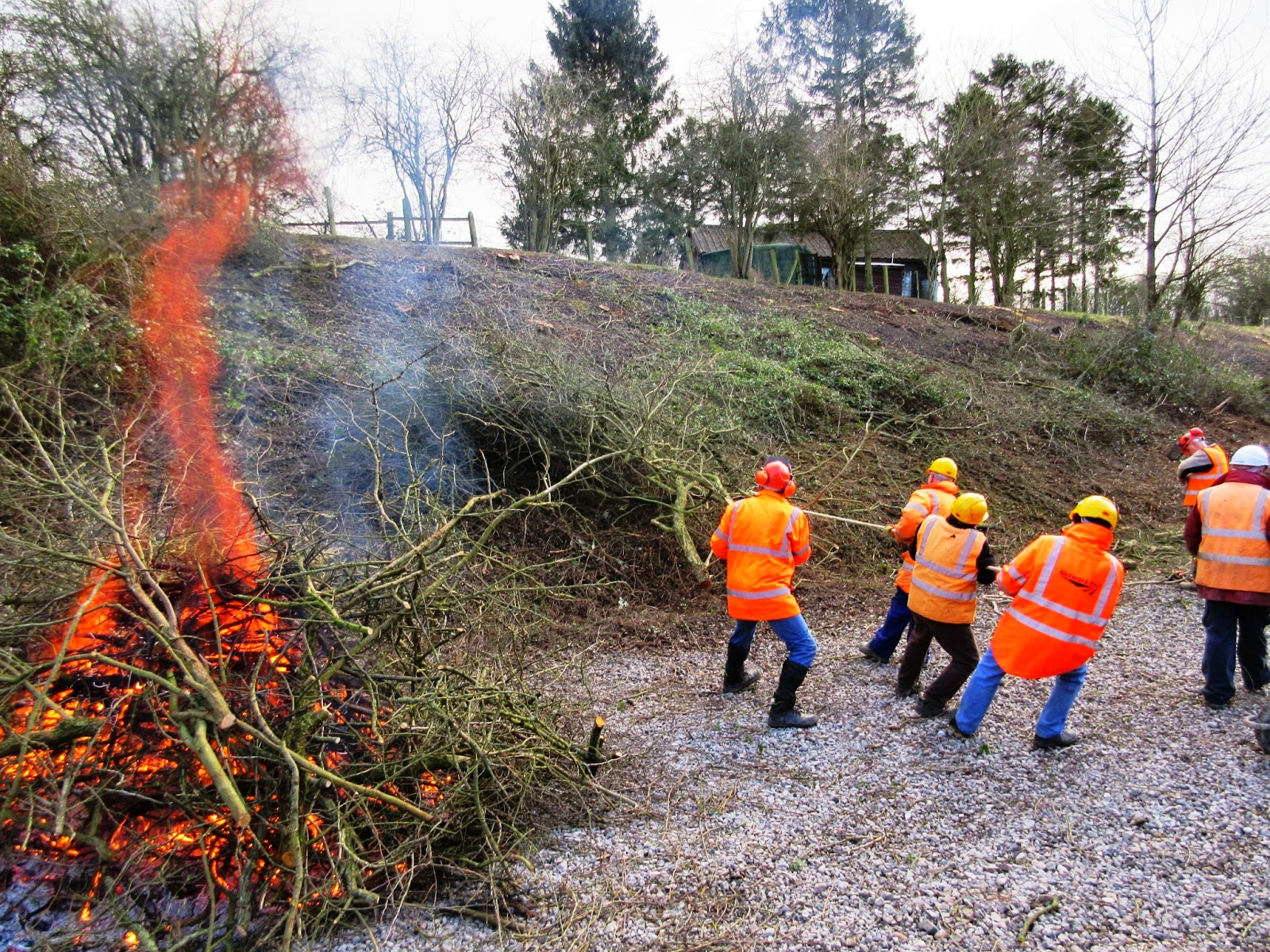 It was certainly a cold start to the day for the 18 volunteers and the most appealing job was to get the bonfires going! This is no easy task, particularly pulling the felled wood down from the bank. 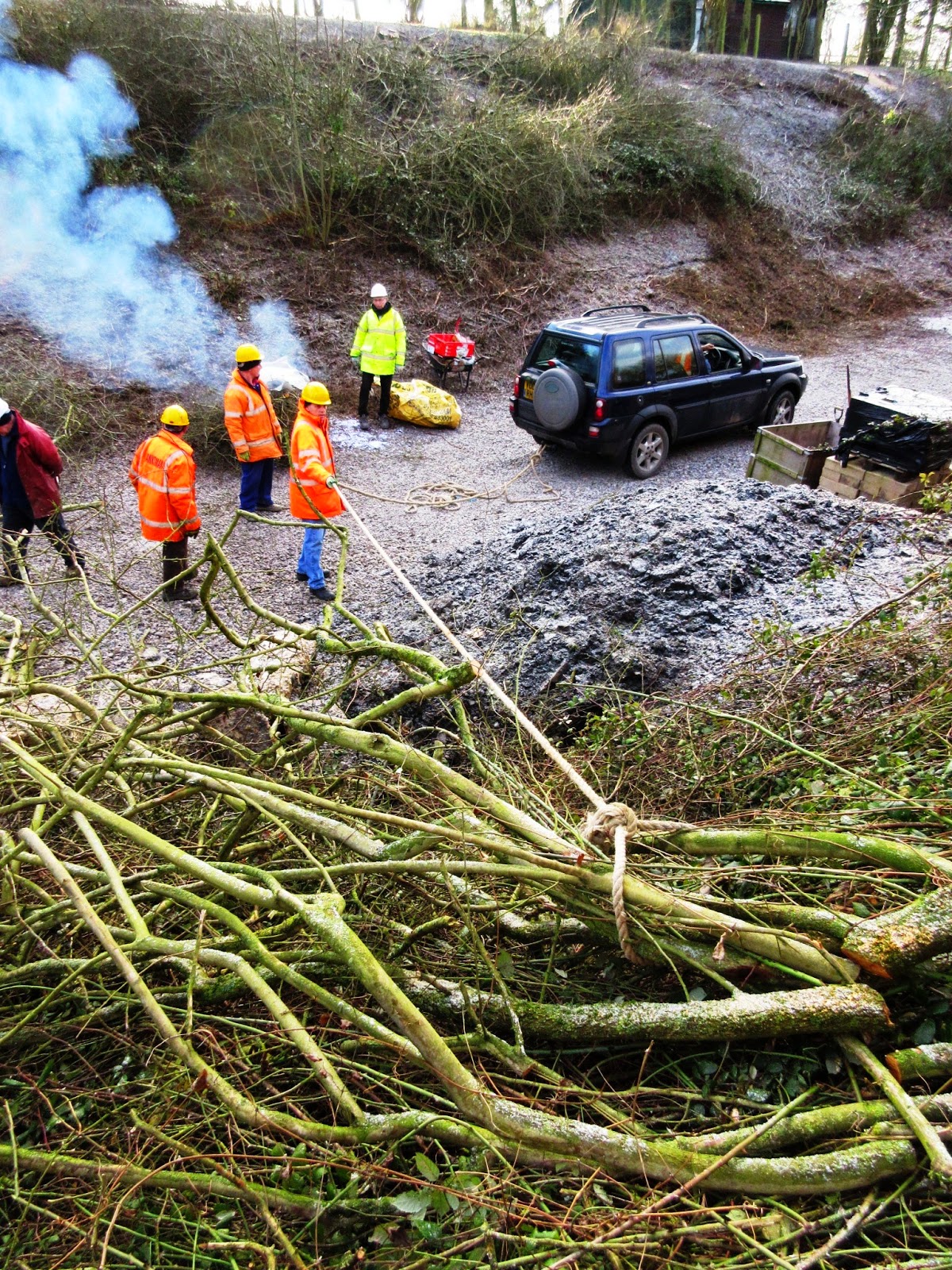 Brian  decided to use his 4x4 to make job easier which meant those sawing had to work faster! Here Brian tries to get the better of the brambles. 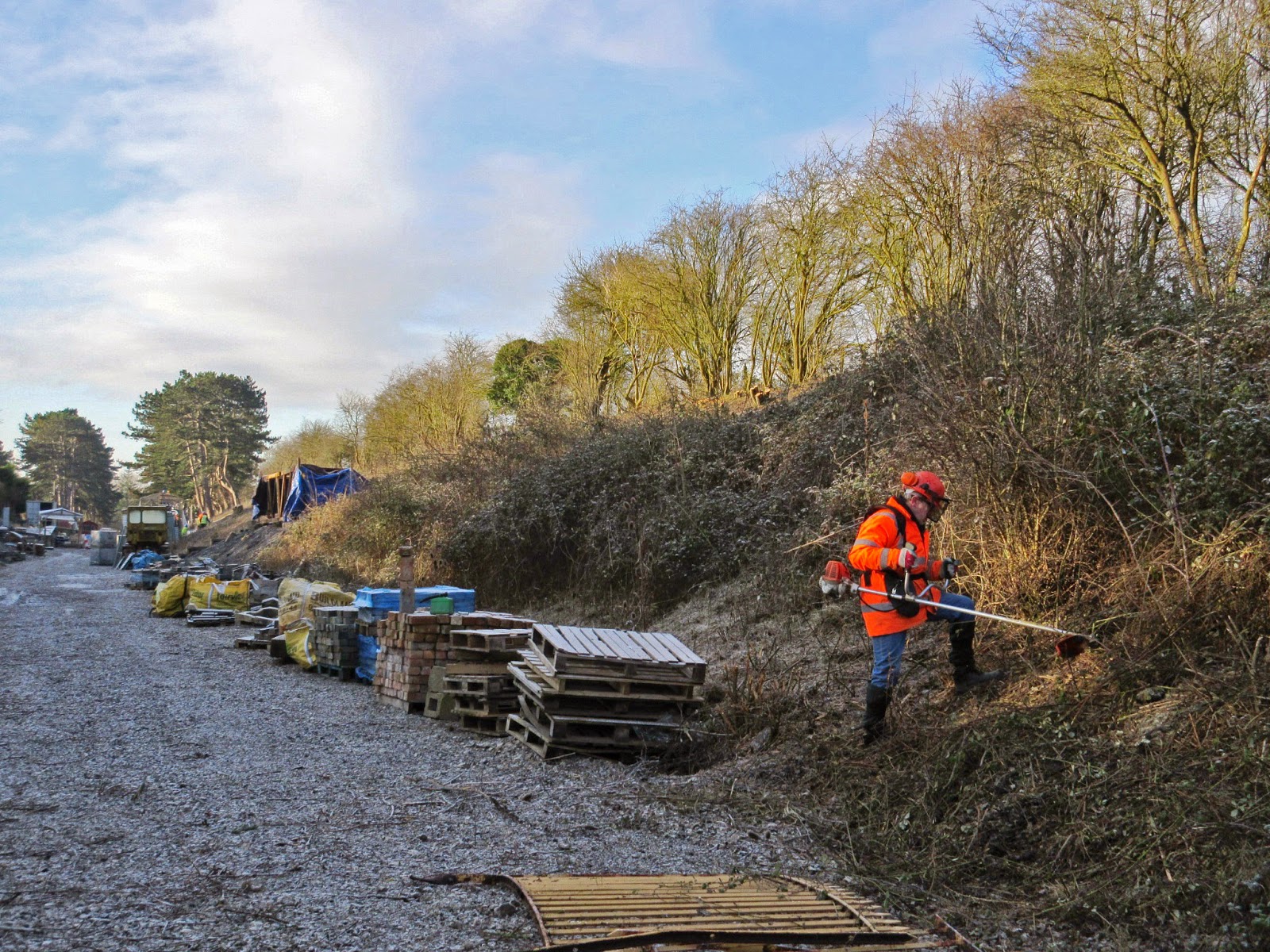 As I say this a hard slog, and from time to time people take a well earned rest  and watch the hypnotic flames of the fire. These are the moments for a bit of a chin-wag and putting the world to rights! 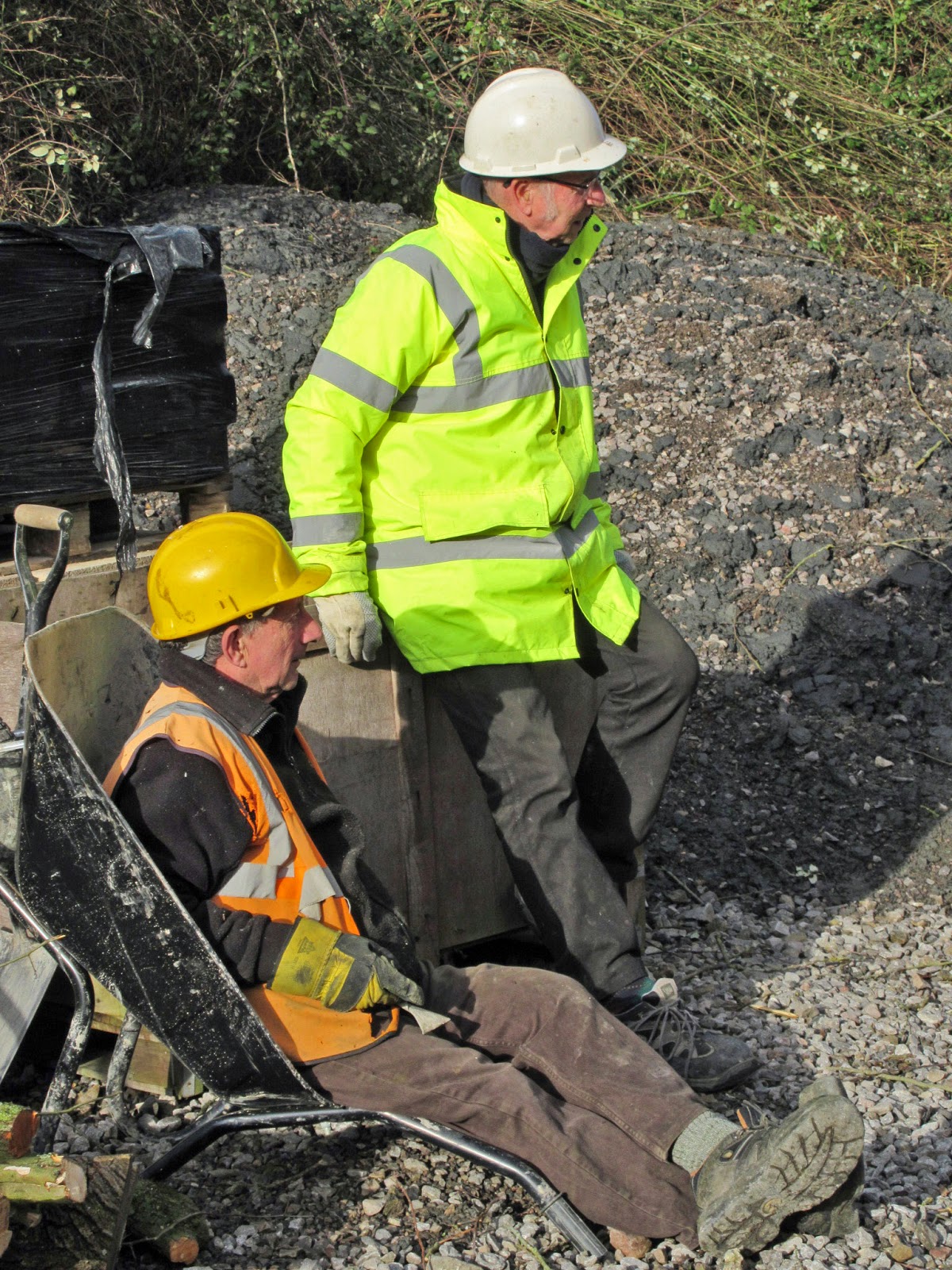 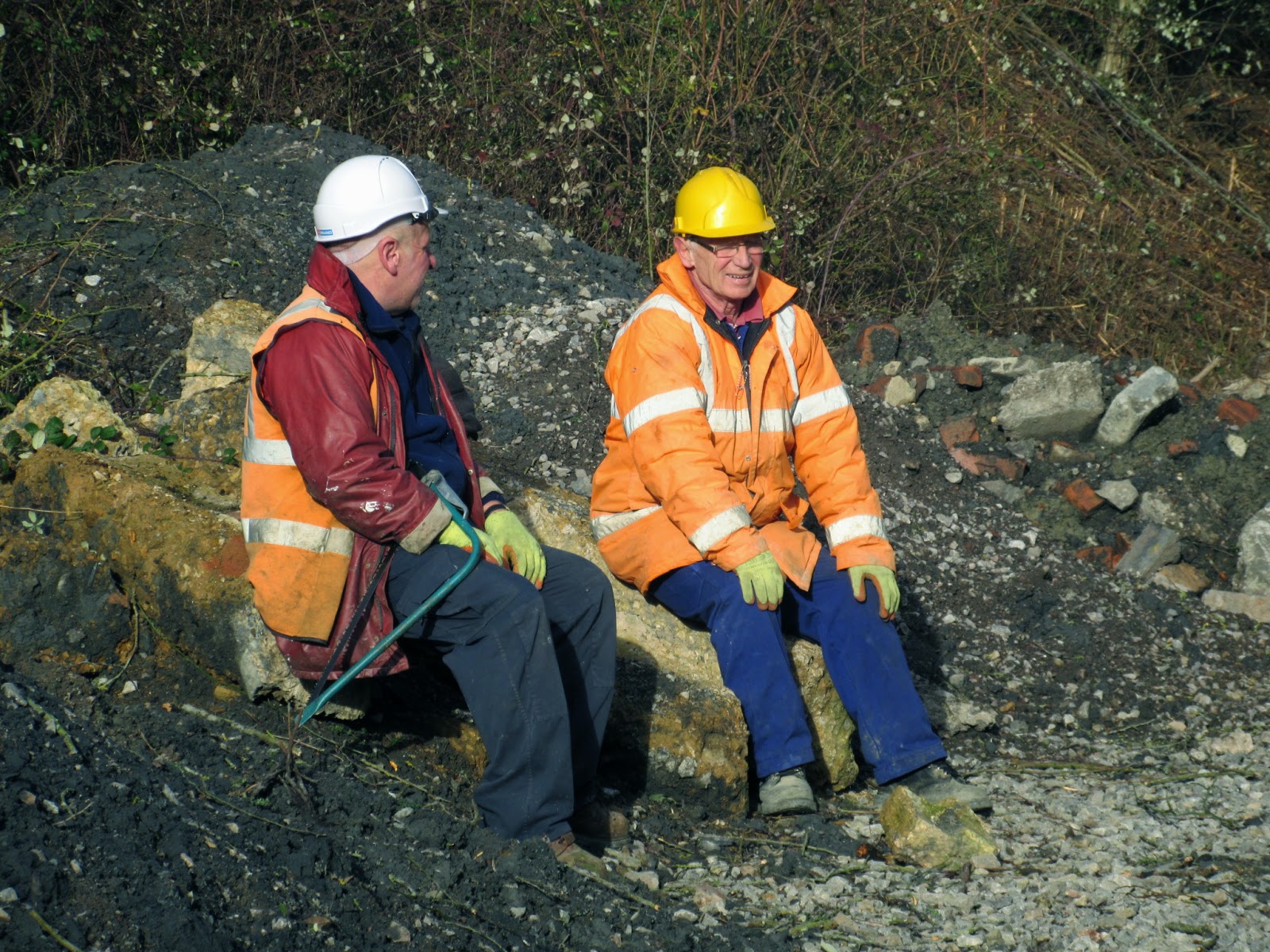 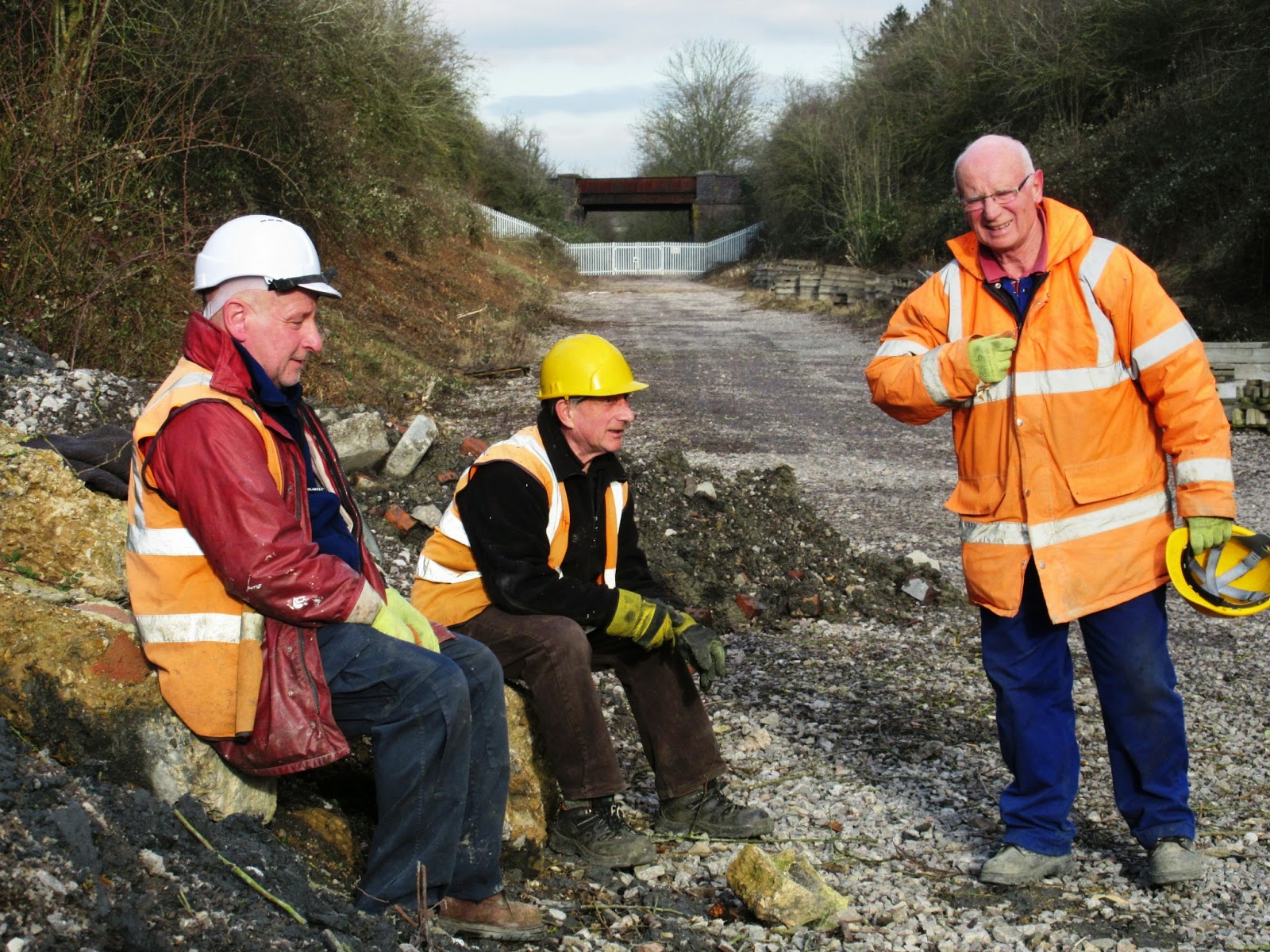 I have to say that much more progress has been made than I could have really anticipated. That fence at the end looks a lot nearer now! 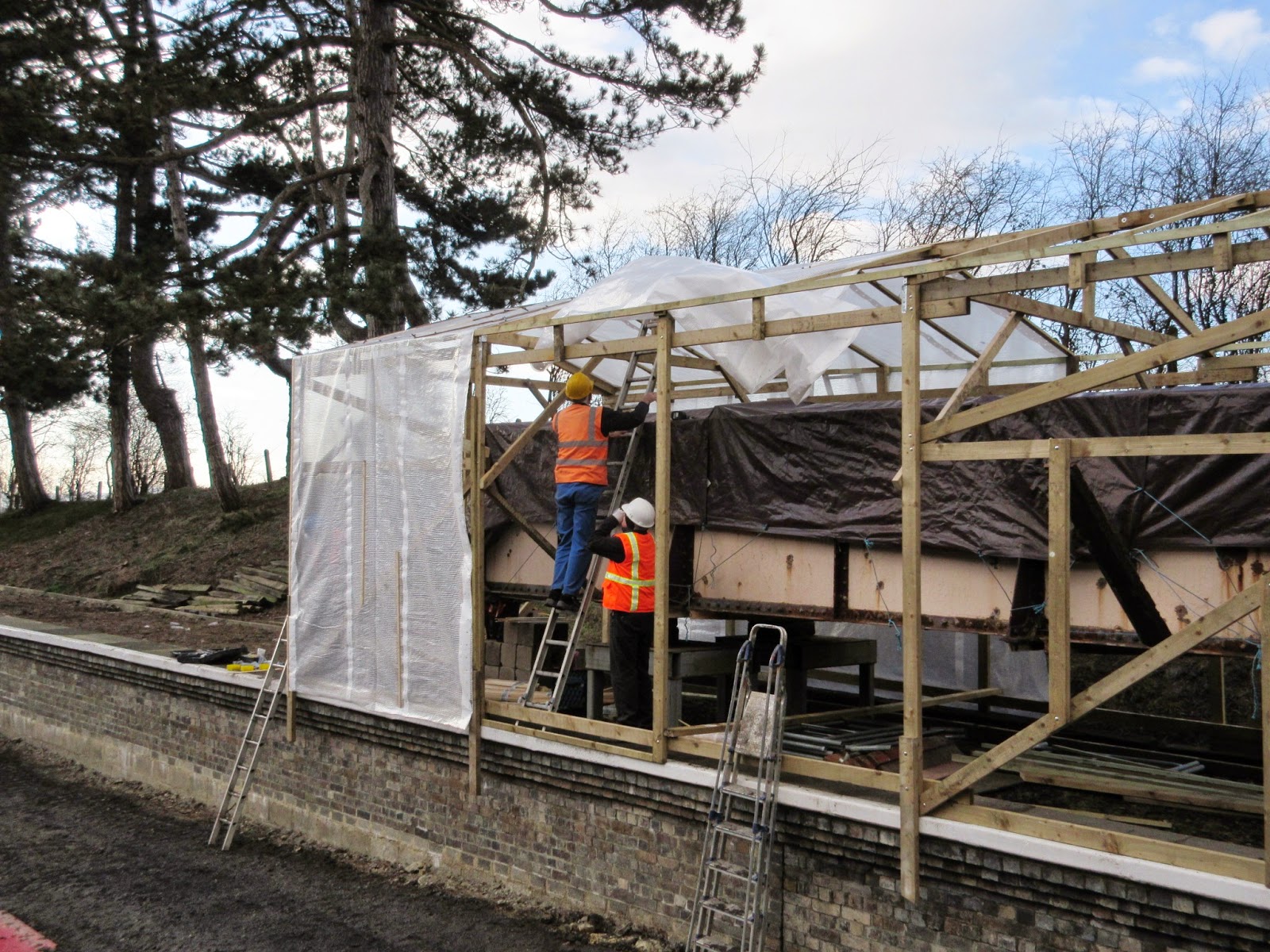 The other main job being undertaken by the volunteers today was cladding the footbridge span shelter. This isn't just  a matter of tacking it on and hoping for the best. To be suitable for sand blasting each join has to be a tight seal and the whole sheet pulled taut over the frame.
Peter, Brian, Paul and Dave did a great job. 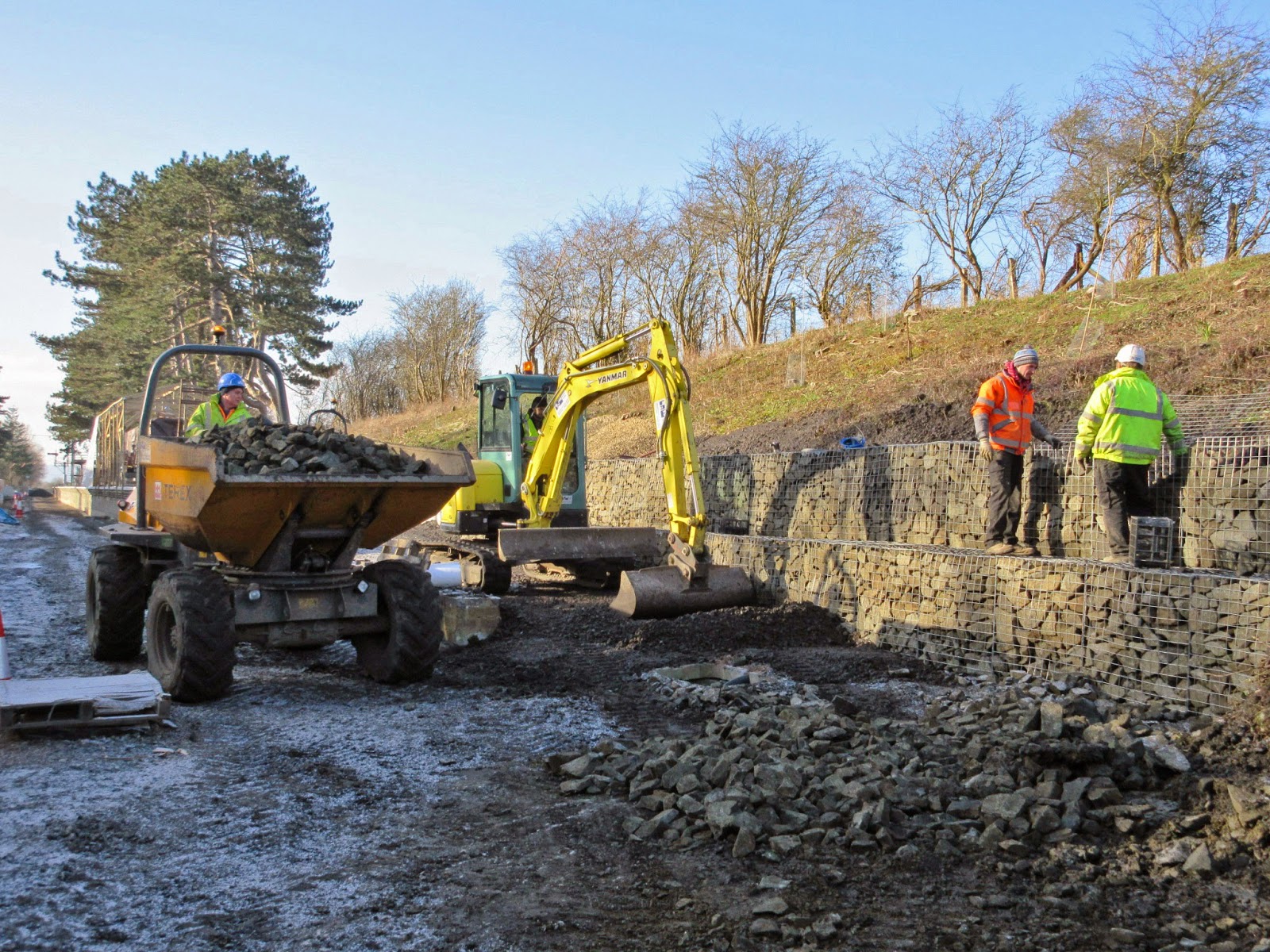 George Law finished the slip work today - a much more time consuming job than they originally estimated. Filling the gabions with stone is a real art , if its to do its job properly and look well finished - it takes time.  Out of interest each gabion takes 2.5 tonnes of stone. However they did a first class job. It now remains for us to complete the wall and the infill, as quickly as possible. 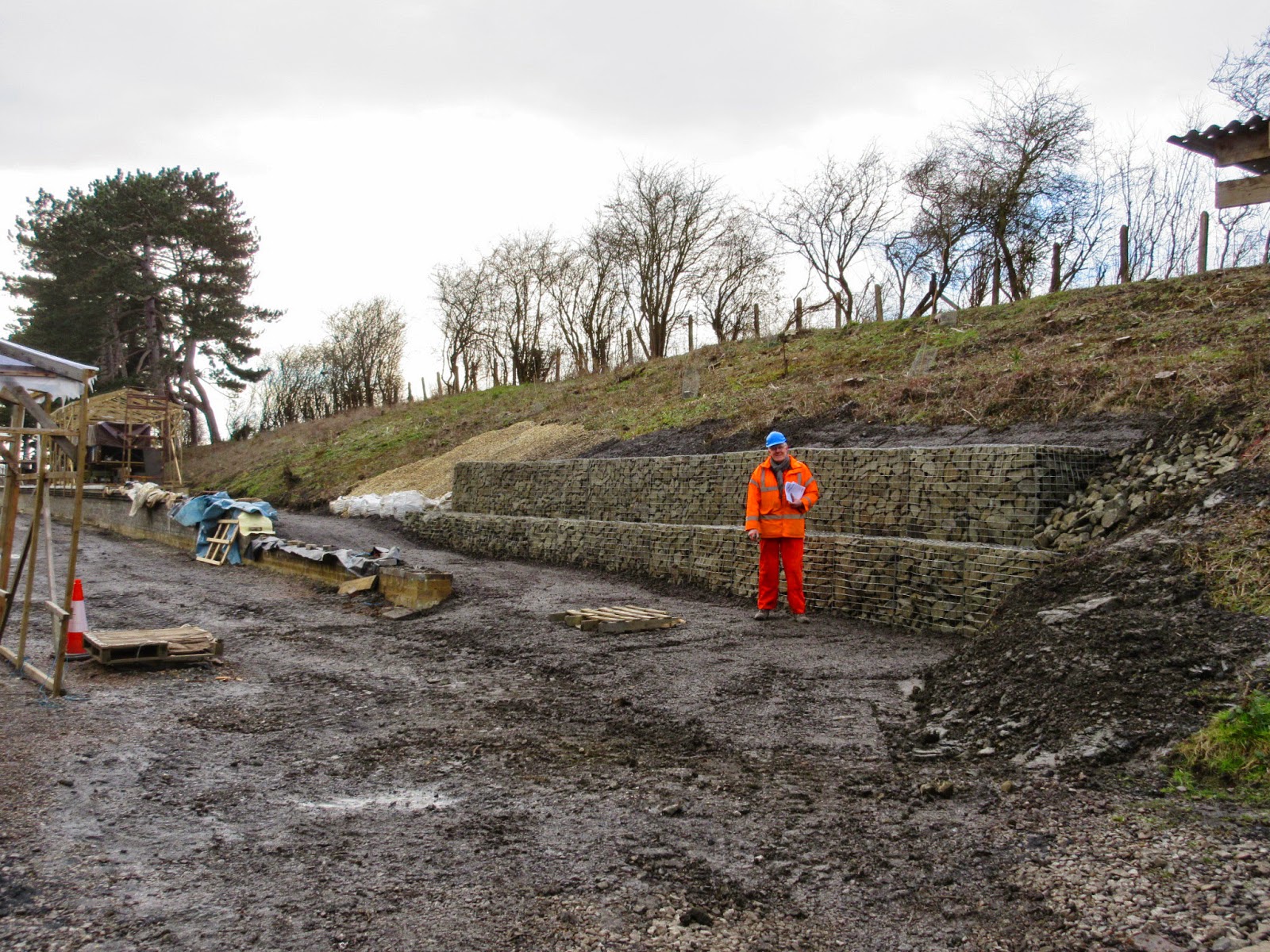 Here is the finish job. The area of Cotswold stone is the actual slip - the gabions are shoring up an area of the bank that has been on the move for many months (see the shoulder above it). We couldn't  afford for this to break away with inevitable expensive consequences.  Such slips are the curse of the of the railways - you will have seen the slip near Leamington - I wouldn't  want to sort that one out! 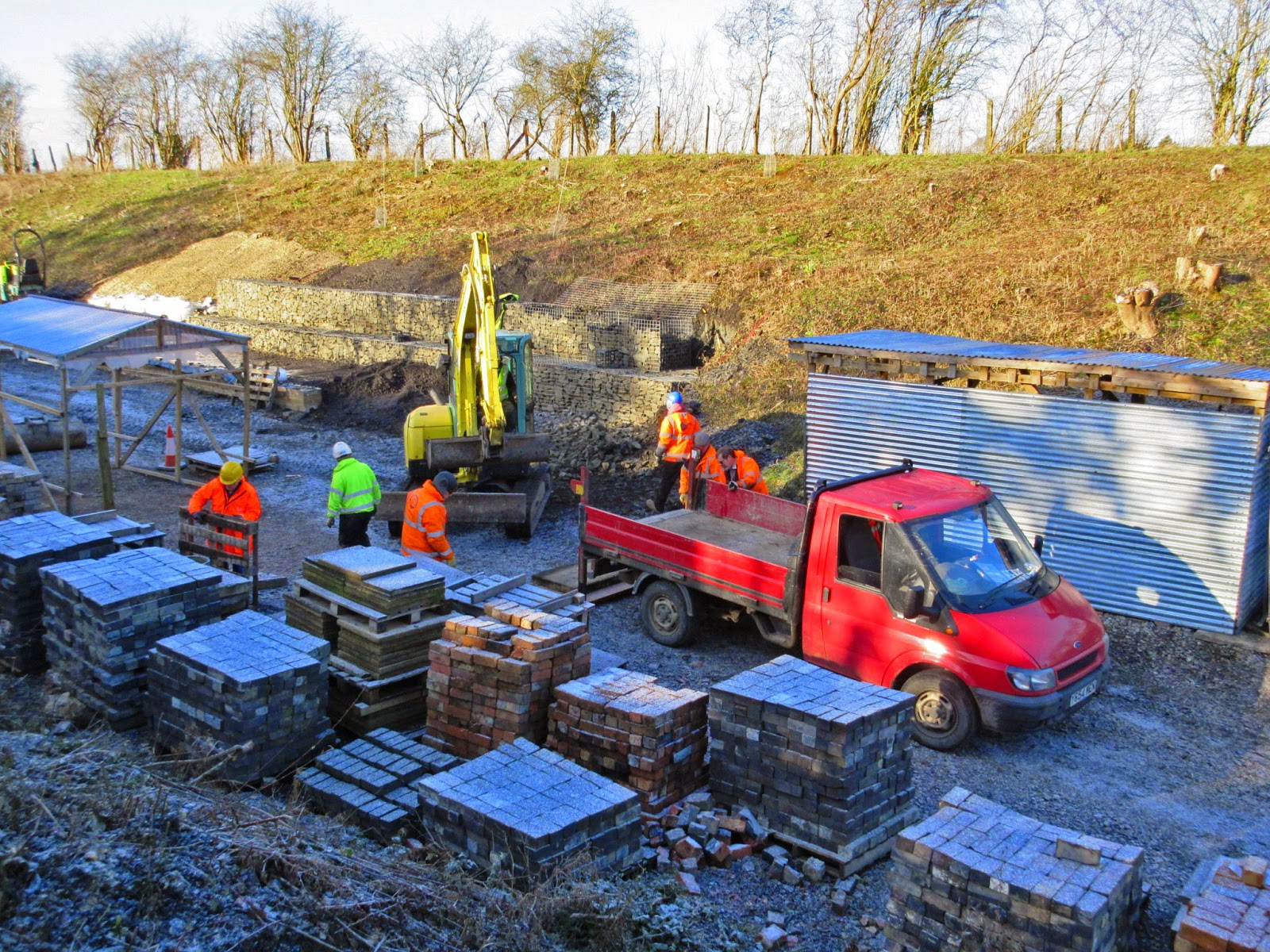 Clive Hawkins from P Way brought us a slab along in the transit. Cheers Clive and Co. They are doing a great job down at Toddington, replacing the ballast through the Station.

I happened to be at Toddington watching staff from David Symonds Associates measure up the  steel work in the Toddington Station Canopy. We are commissioning DSA to produce some manufacturing drawings for Broadway so that we can get to grips with the cost of maintaining the historical accuracy of the building. Pictures to follow. 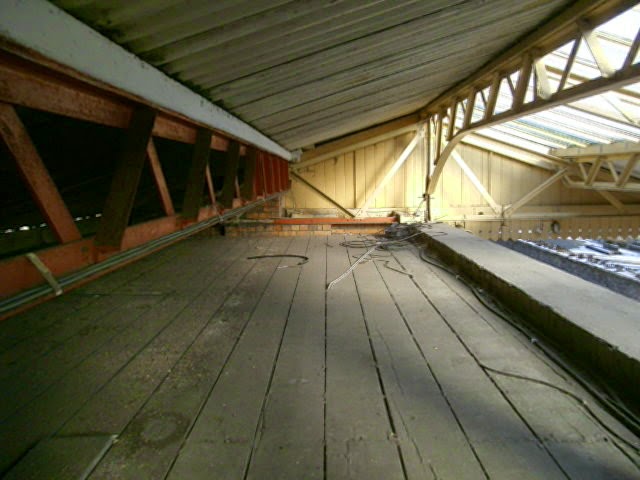 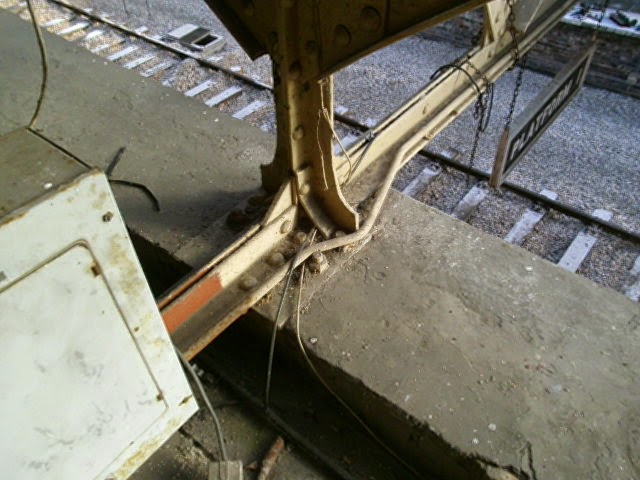 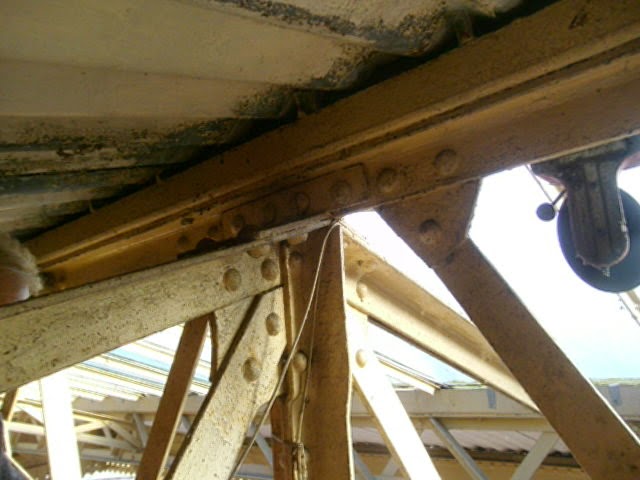 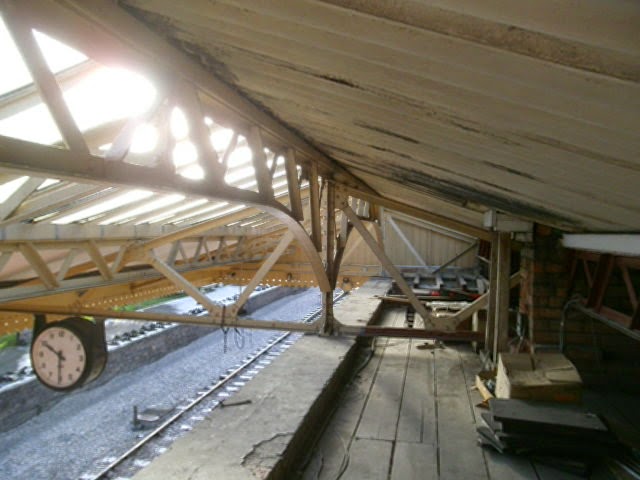 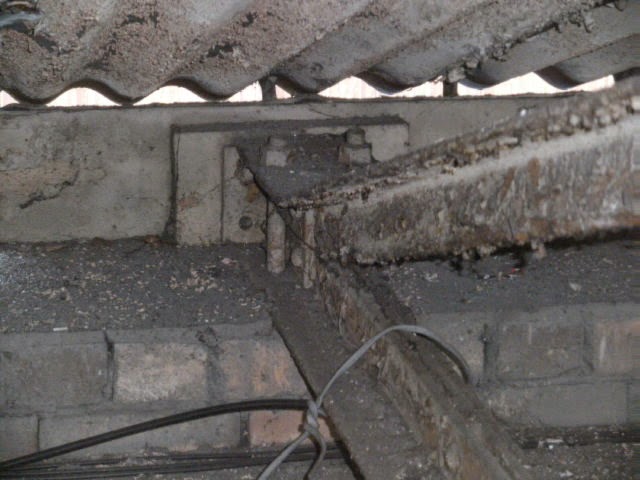 Lastly I would like to thank a visitor today for a £1000 donation he made towards our efforts. This is the second £1000 we have had this year. I would like to thank both individuals for their generosity. We will spend the money wisely. Also we are no less grateful for donations coming in for the signal box windows. Thank you.
Posted by Bill at 20:56

Indeed, a marvellous gesture and just shows the faith there is in supporting the hard working people who are getting the job done - in all weather!

What are the consequences of Geo. Law having to spend more time than they estimated? Did that wind up being paid for by the GWSR, or did Geo. Law make a loss, or was their estimate high enough to take care of it? If this is commercially private, and you can't say, understood, of course!

This sort of job is normally time and materials unless it is a major contract.