The ice has finally gone, and air temperatures were up far enough for two gangs to continue laying bricks today. At last!
Our first job was to level the additional ex Toddington ballast that had been brought up to 1c on Monday. 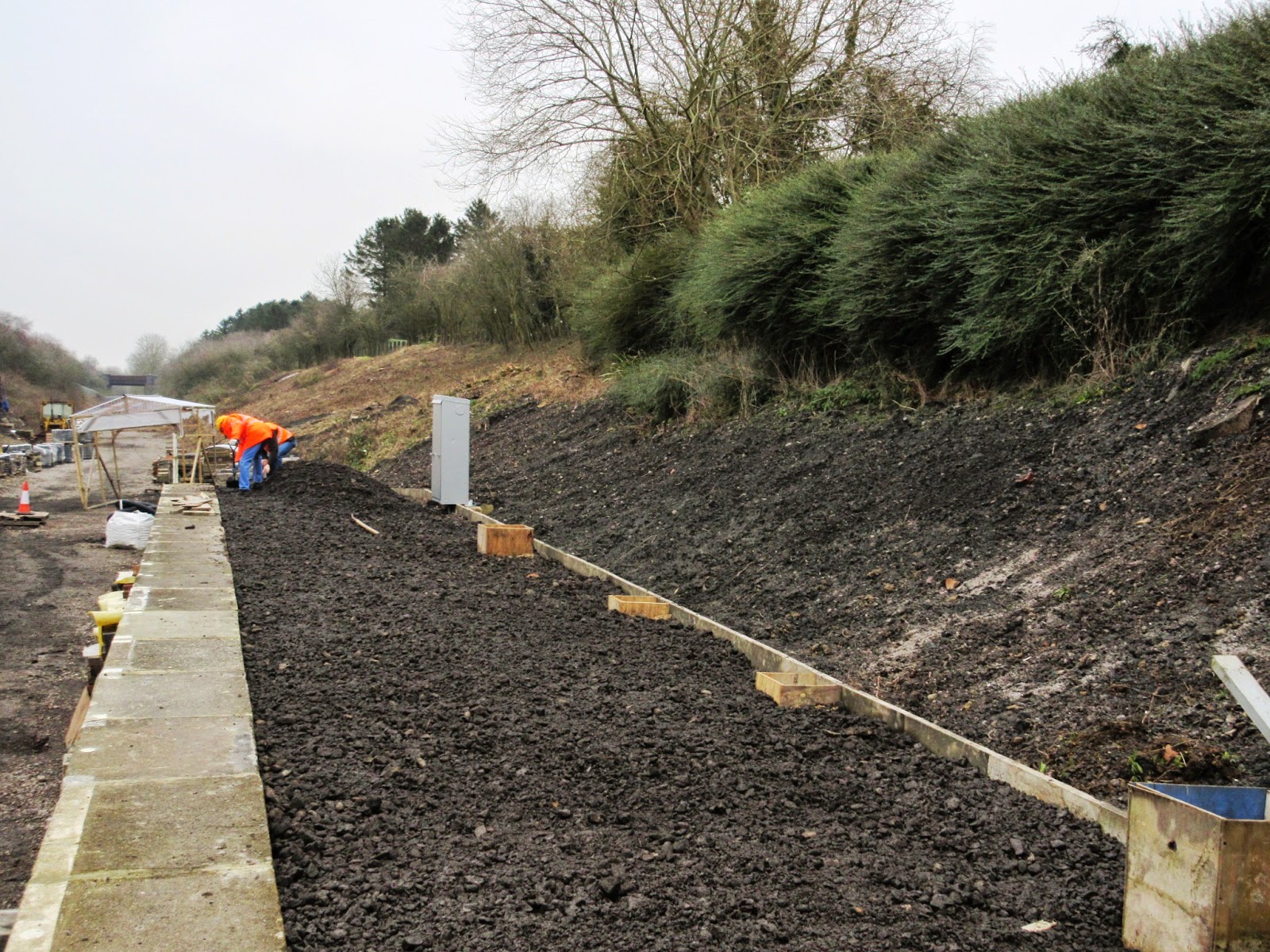 Here we see Rod and Terry spreading out the last of the piles, after which they got out the roller and rolled it nice and flat. With this action the back fill of platform 1c is now complete. The slope behind will be seeded with grass in a month or so. In the middle you can see the post holes for the 1c running in board, as well as two lamp sockets for a pair of genuine GWR lamp posts that we have. Anyone know of any more? 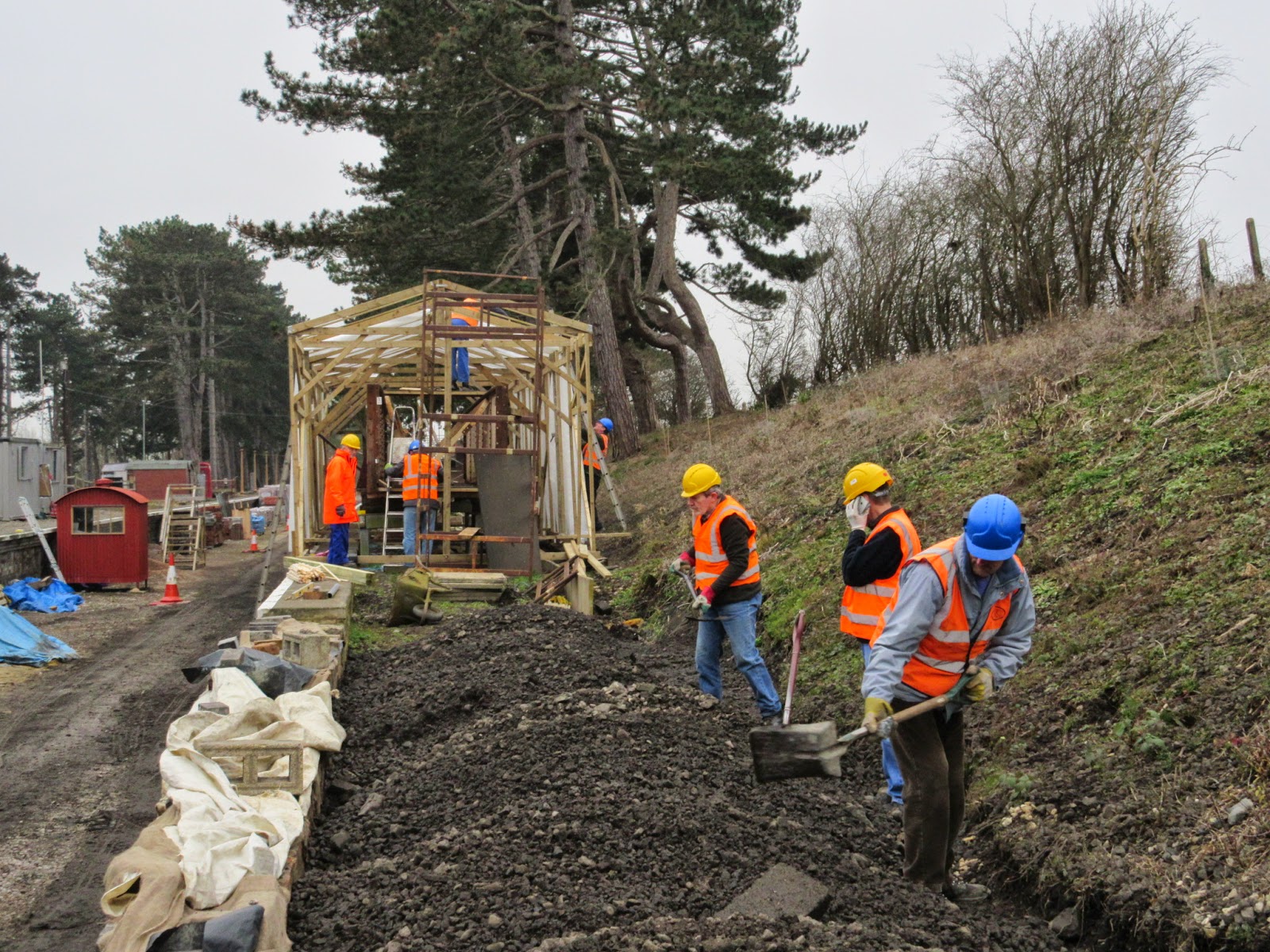 The same Toddington ballast retrieval action on Monday saw more piles dumped behind platform 2c. There is an urgent need here to back fill this and stabilise the cutting side. However, first we have to install the vertical slabs at the rear, which meant that a line had to be dug out through the dumped ballast for the slabs to run on. Oh boy. 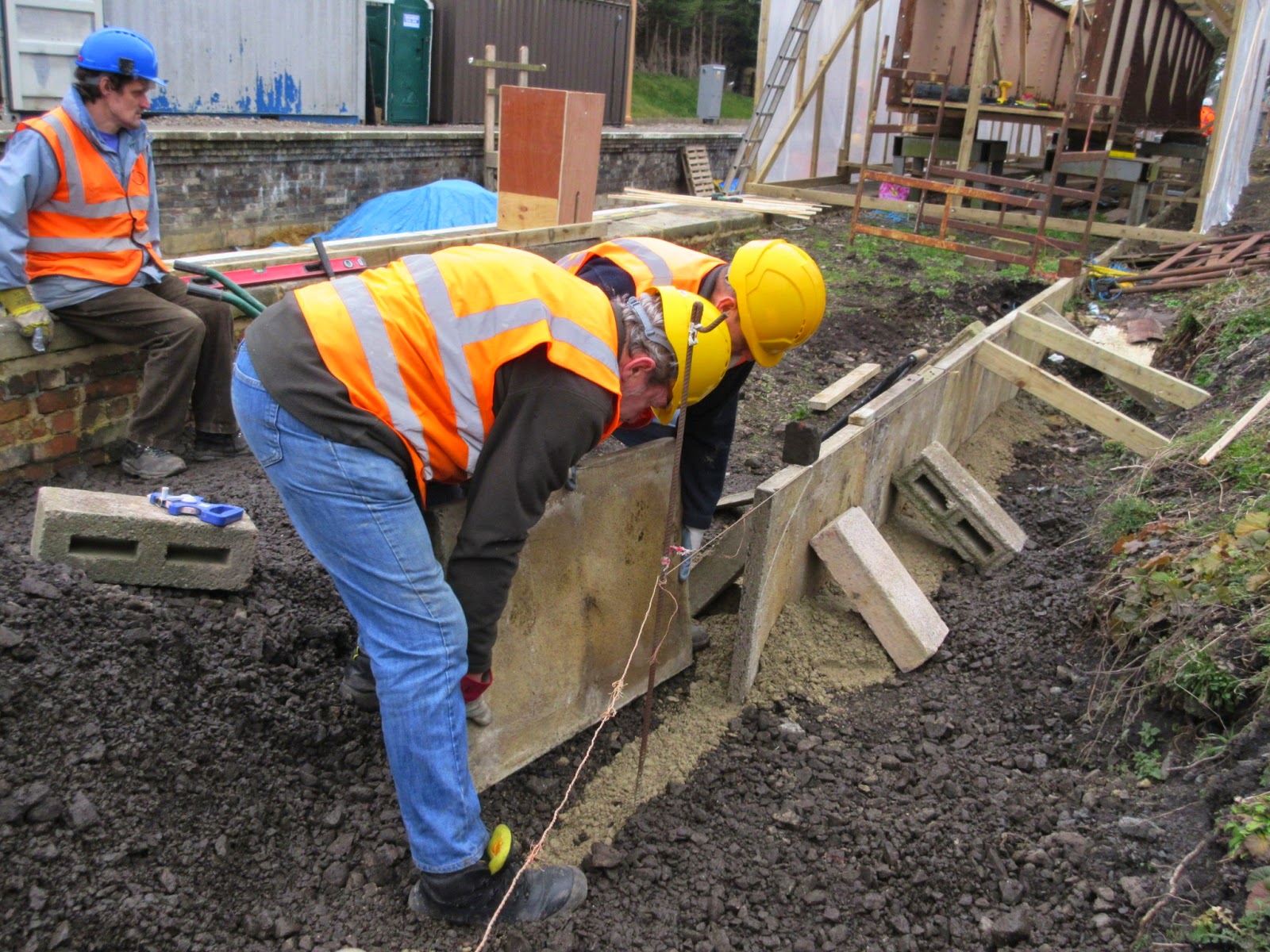 Rod and Terry did the slabbing, supported by father and son team Chris and Dave on the mixer. It's very tricky getting the slabs level, in line and in the right place. Also, they are heavy! We've been very lucky in that we have had several useful donations of these slabs, so that despite the 400yd or so length of the two platforms, we never actually had to buy any of these. Next week, when the dry mix has set, it's time to shovel in the ballst to the rear, to support the slope and prevent it from slipping. 5 slabs were laid today, and one reset. Rod and Terry often lay 10 or more slabs in a day, but of course today the job was slowed down by the moving of the heaps of ballast on both platforms first. Lots of digging. 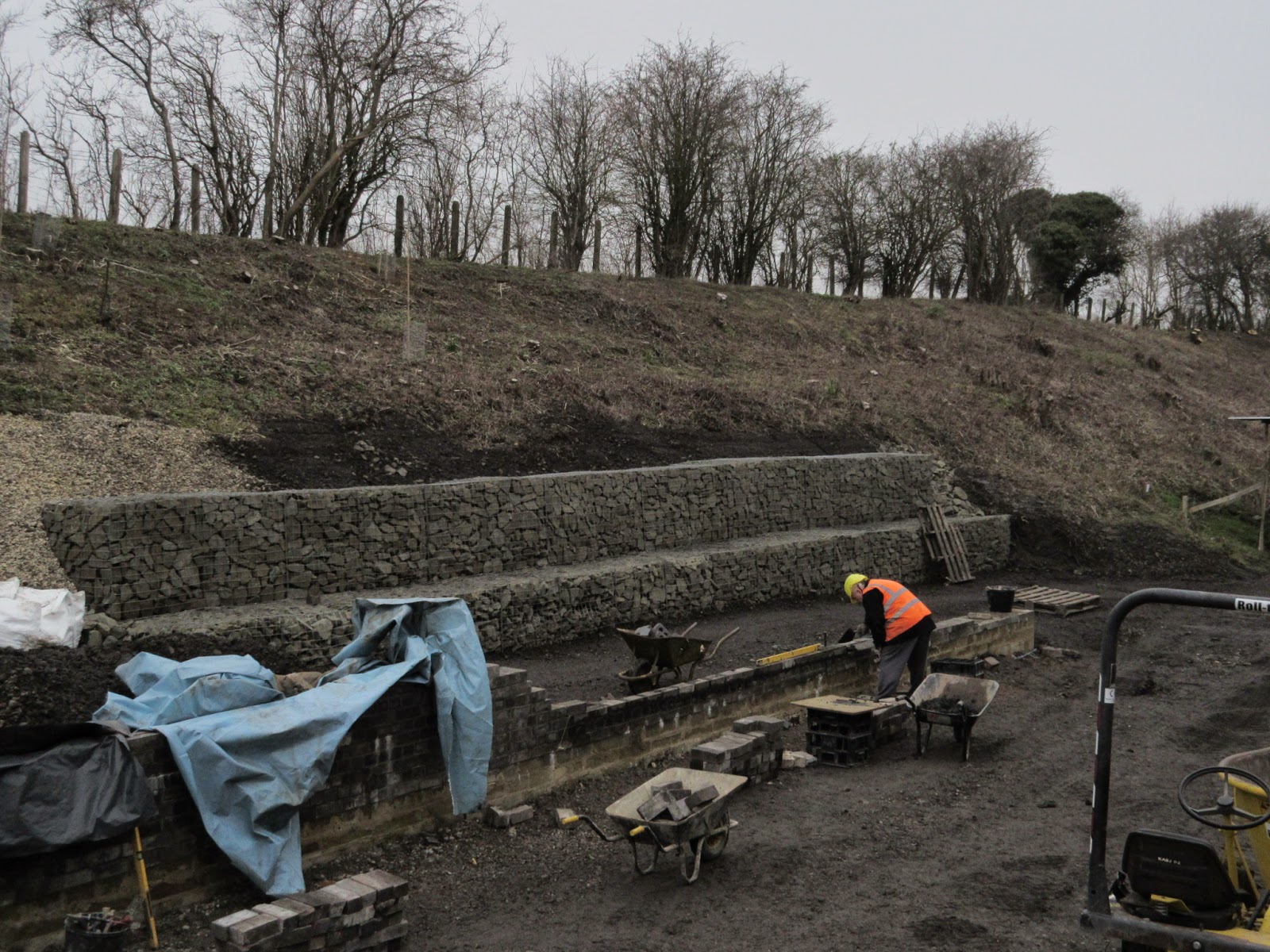 It was nice to see Bob J back at work today. He spent the day on the northernmost end of 2c, where he laid a row of blues, which he also backed up himself. This being a downward slope, most of the bricks will be on the left. The piles of bricks in the foreground have now been moved 3 times after they were first cleaned - once from the cleaning benches to the platform wall under construction, then to the opposite wall in the foreground, in order to let the contractors' 6T dumper by to deal with the slip, and today Clive moved them all back again, so that they could finally be laid. Lay them quick Bob, before we are asked to move them again!

The shelter for the footbridge also did well today. Jim's gang rolled out the final two strips of sheeting and battened it down securely. It is now covered at the top and down both sides. Jim noted that the footbridge span inside was already a lot drier, so it's working.

Now that the Toddington spent ballast has been removed form the car park field again, negotiations have resumed to bring the remaining two flights of steps to Broadway. It's a complicated ballet involving the lorries to transport them, two different cranes of the correct capacity, clearance of the site at Wishaw so that they are accessible, and of course clearance of our own site, which had 20 heaps of ballast put on it just as we were going to take delivery. A couple more weeks and we should see the steps here, propped up on trestles so that they are stored upright and don't fill up with rain.
At lunch time, Jim regaled us with tales of his vast collection of LMR HO locomotives. So much so, that doubts began to seep in as to the true purpose of the big shelter he is building with his gang.... 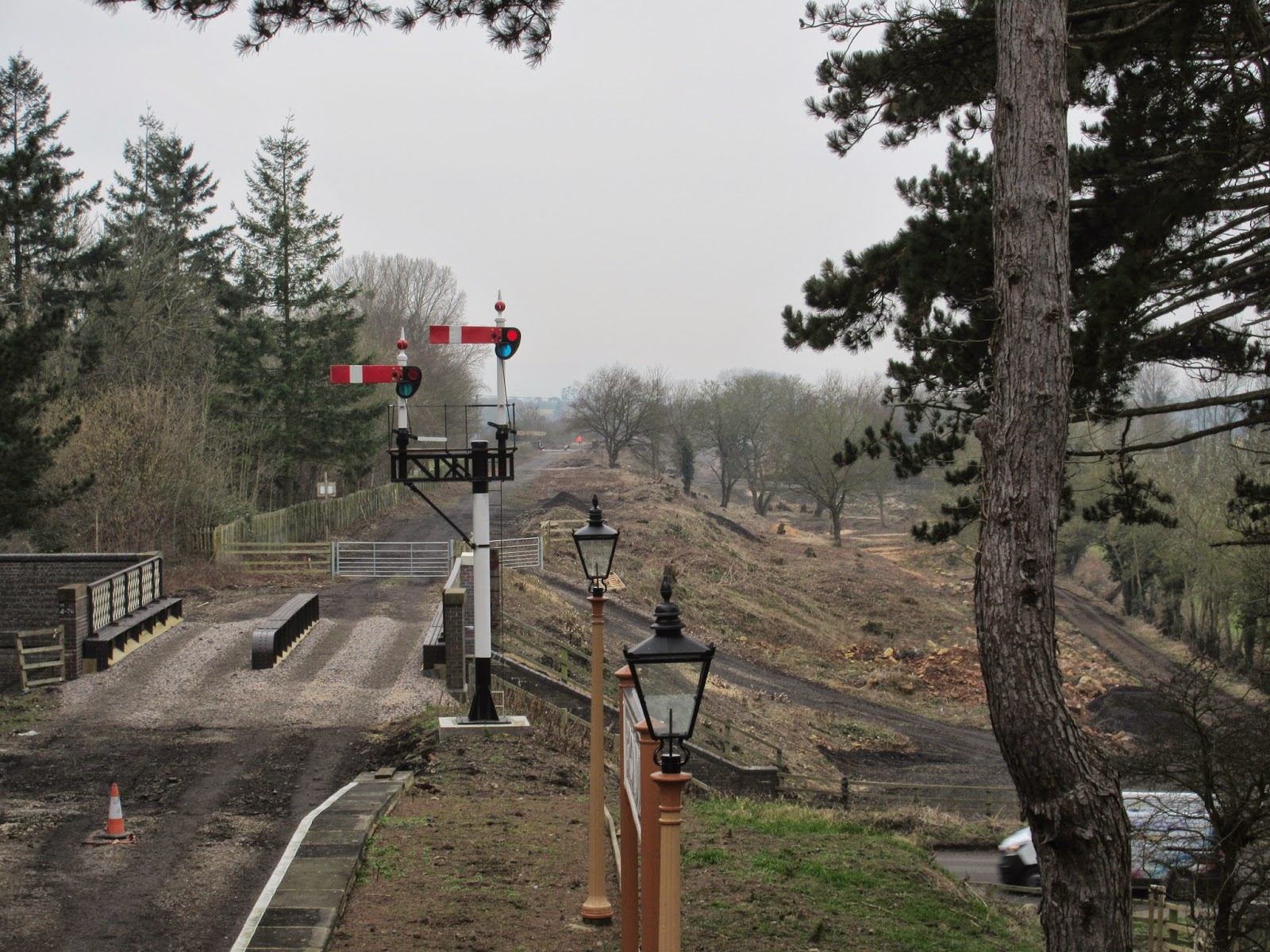 After lunch, time for a look at the lads back at work on the signal box. After the scaffolding got another lift a couple of weeks back, it's pretty high and draughty up there!

This look down south shows the recent work done to clear the car park field, so that an assessment can be made of what needs to be done to the bank (if anything) and to achieve the proposed car park itself. The bracket signal looks great, and a little (S&T) bird told us on Monday that they are hatching a plot to erect another one! 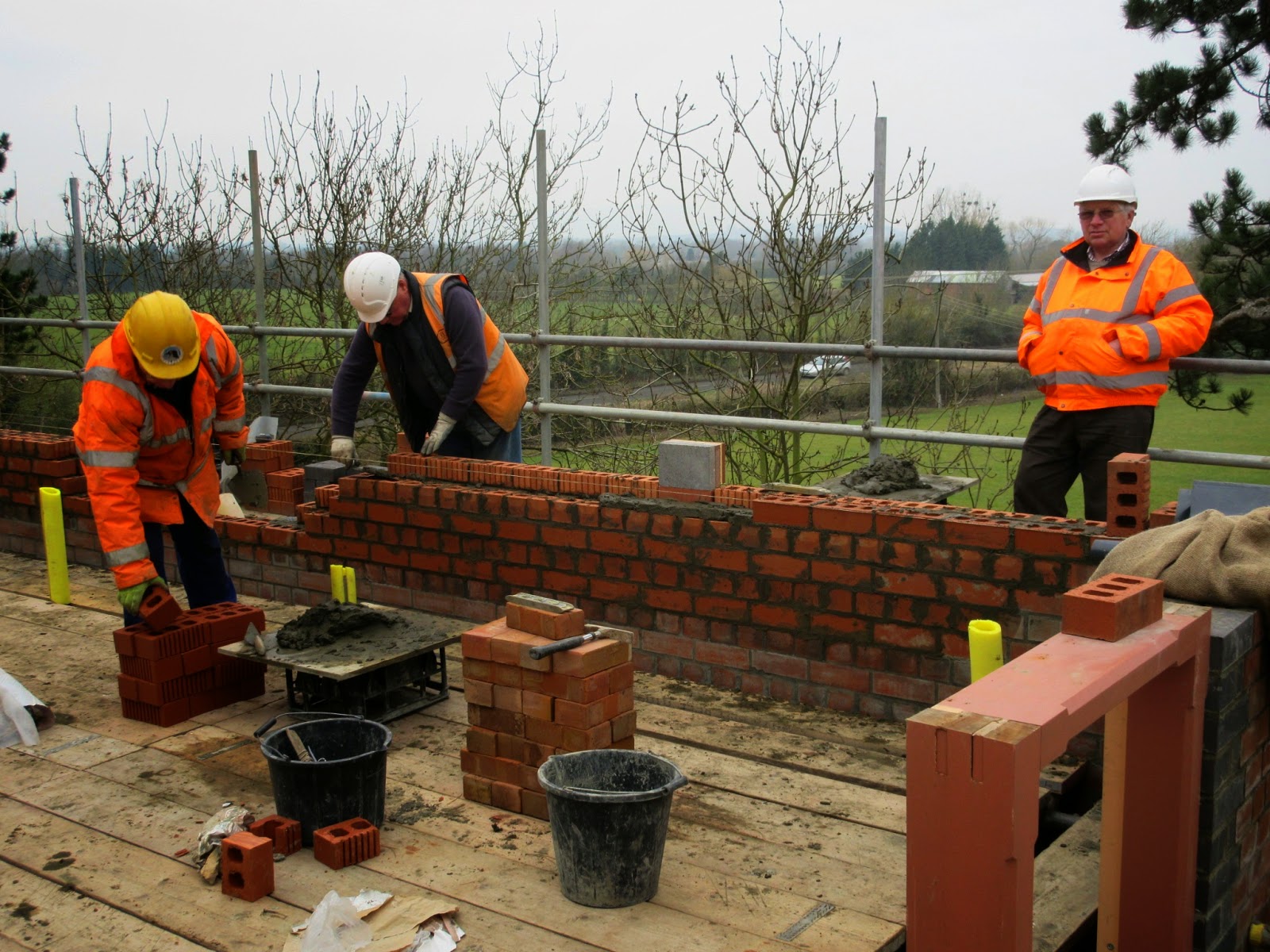 In this picture we can see Tony and Bob continuing to raise the rear wall, and they laid five courses today, filling in between the corner towers raised last time. JC is supervising, back from the morning visit to our friendly carpenter in Witney, where a delegation went to inspect the big window framework that he has assembled for us. More of that later. 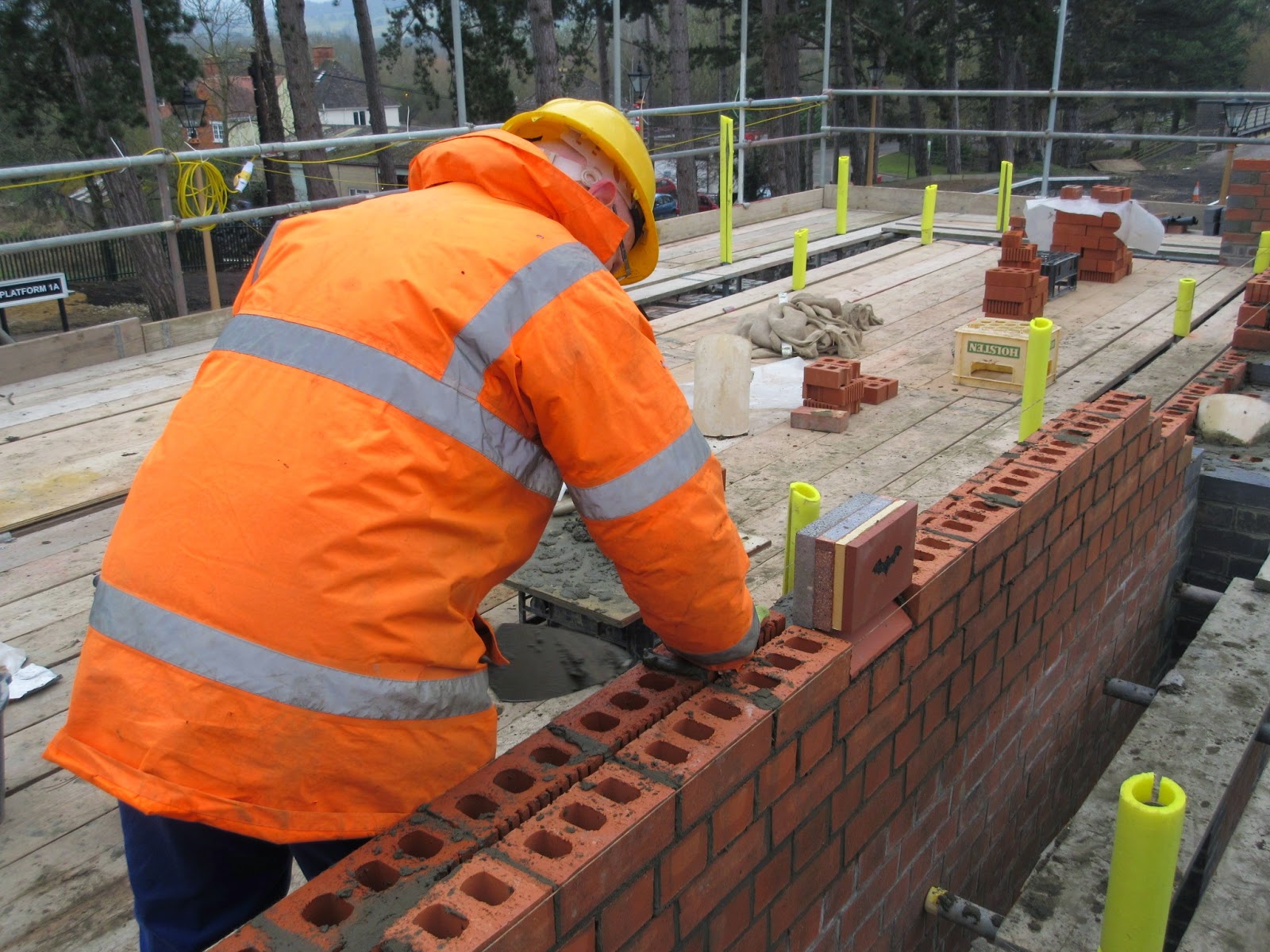 Paul was on the ground making up the mix, and bringing up barrowloads of new bricks being stacked in the background.

Tony is working on the inside row, just behind a curious little box that has been set into the outside course of bricks. Anyone see what it is yet?

It's a bat box! Inside are three compartments, open at the bottom. Let's hope the bats appreciate the effort - it is unlikely we will ever know, as once the scaffolding is down this spot will be quite inaccessible. 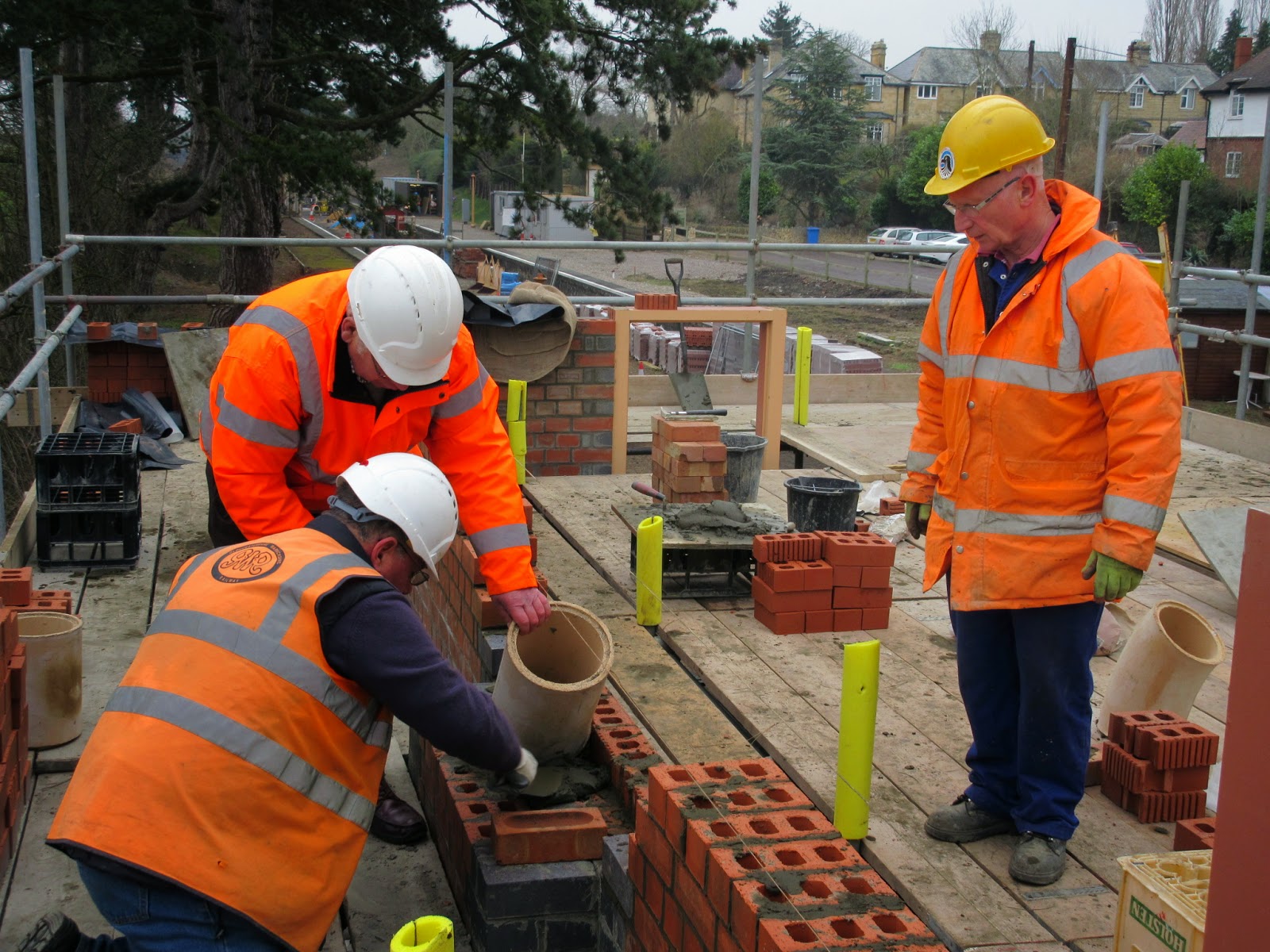 Part of the rear wall of the box is the chimney. This is a great architectural feature, with its decorative blue bricks on the corners and circular flue inside.

Here we see JC and Bob doing a trial fit for the next flue piece, so that the brickwork around it is in the right place. It is at an angle because for a fire to draw, the flue needs to have a kink in it. Behind Tony is the curved piece to go back the other way. 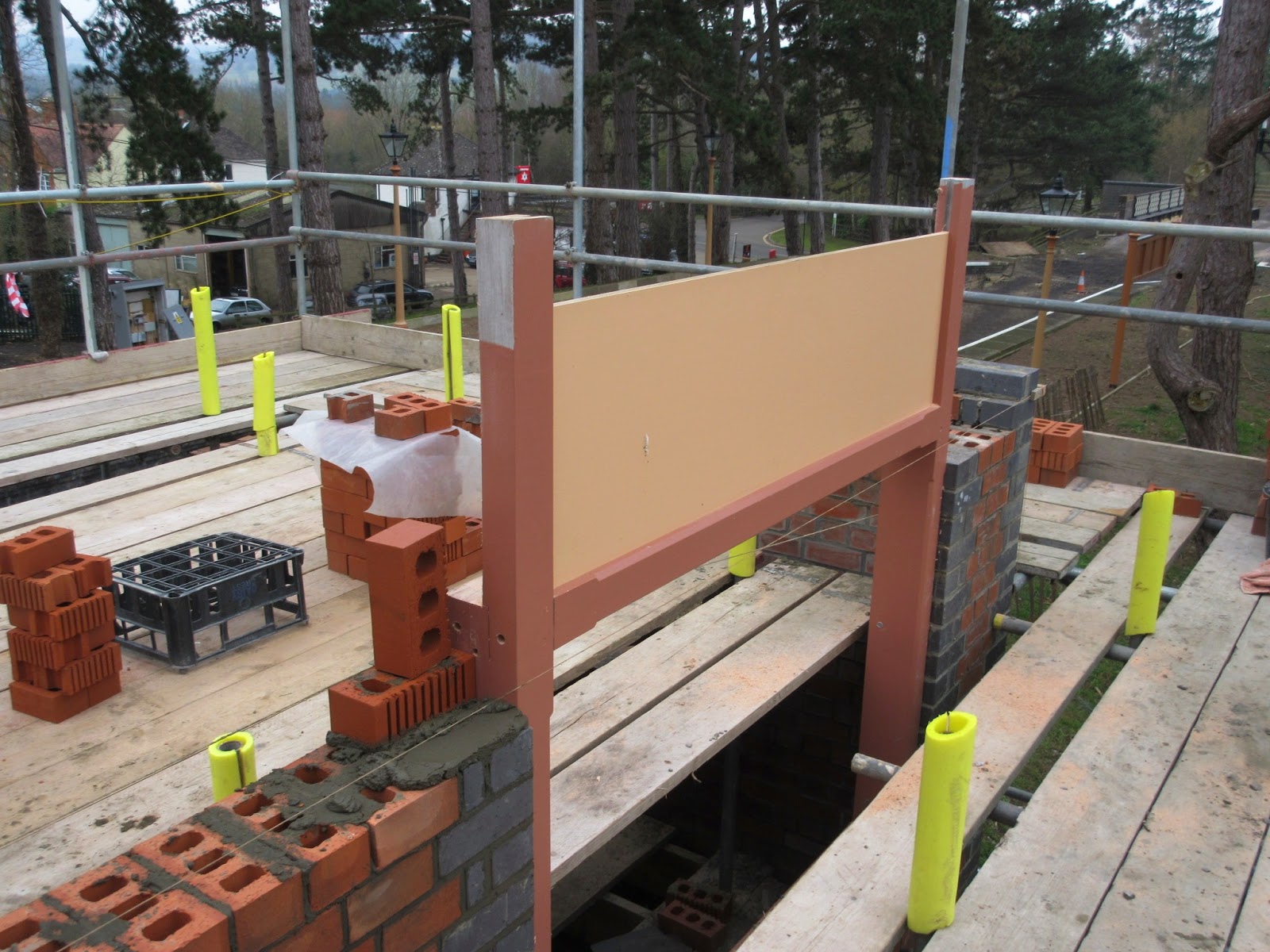 This last picture up on the box is included to show how far we still have to go. The highest brick on the RH corner is 4 courses below the topmost row of bricks. As you can see, the foreground is also almost up to this height, filled in today. The frame in the picture is for the rearmost window, the top of which is actually under the eaves, so it is a bit taller than the surrounding brickwork.


In the morning, Bill, JC and John S went at the invitation of our carpenter to his workshop in Witney to view the hardwood window frames that he has dry assembled. They certainly look the business, and the delegation came back delighted with what they saw. Brilliant! Here are three pictures taken during the visit. 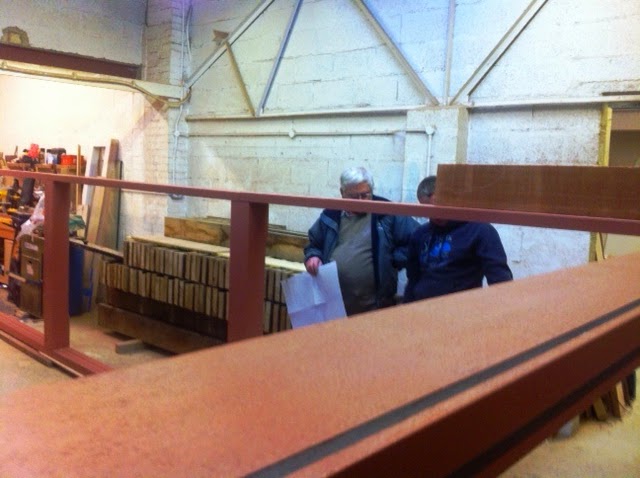 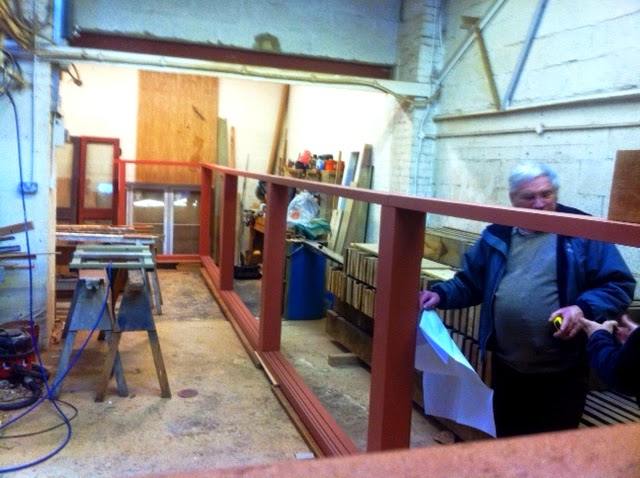 This shot shows the front part of the box from the inside, with the 4 spaces for the front sliding windows. You can see grooves for the runners in the bottom. These frames not only contain the sliding windows, but also support the roof at the front, which is why they are so chunky. 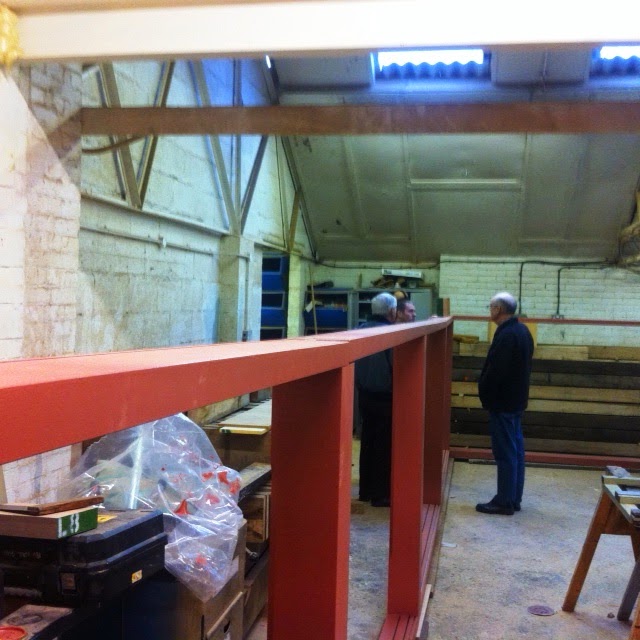 Here the two Johns are in conversation with the carpenter, whose father once worked for the GWR at Swindon, and you can't get much closer to genuine GWR windows than that!

It is intended to take delivery of the frames this coming Saturday, and install the sills. The remaining framework will be installed the Wednesday after that.

Inside the frames go 7 pairs of sliding windows, also made of hardwood. Hence there are 14 sliding windows in total - 4 pairs at the front, two at the sides and one pair at the back. This is a good time to give an update of our sponsorship call then. We started off with 5 sponsors, who spontaneously came forward with offers to sponsor one sliding window each @ £250. After our appeal on this blog 10 days ago, another 3 sponsors came forward - thank you gentlemen, you are fantastic! - and one of these went so far as to sponsor two. This then brings us up to 9 sliding windows sponsored. Five to go.... if you want to help us and be one of the last 5, then send me an email to breva2011 (at) hotmail.co.uk and I will explain the mechanics, including the option of gift aid, which makes it more interesting.

Back to the Broadway site.... unphotographed, but not unnoticed, was a small team consisting of Peter and Ian at work repairing the storm battered brick layers' shelter. Let it rain, our brick layers and corbellers will stay in the dry. Thank you guys.

At the northern end of the site Brian and Vic were busy with chain and hand saws trying to clear as much of the Hawthorn and Bramble on the cutting sides before the bird nesting season starts. Working on the Malvern side they cut down a magnificent 60 yards worth, leaving only another 50 yards on that side to go before it is fully cleared all the way to Springfield Lane bridge. Now for a gang of us to drag the brash down to the trackbed and stgart a bonfire. We'll wait for a cold day to do that.

All comments re H & S have been duly noted!

So can we use Everest for the station windows?