The first day of 2015 for the Wednesday Gang (24 in attendance) and they certainly packed in the jobs! 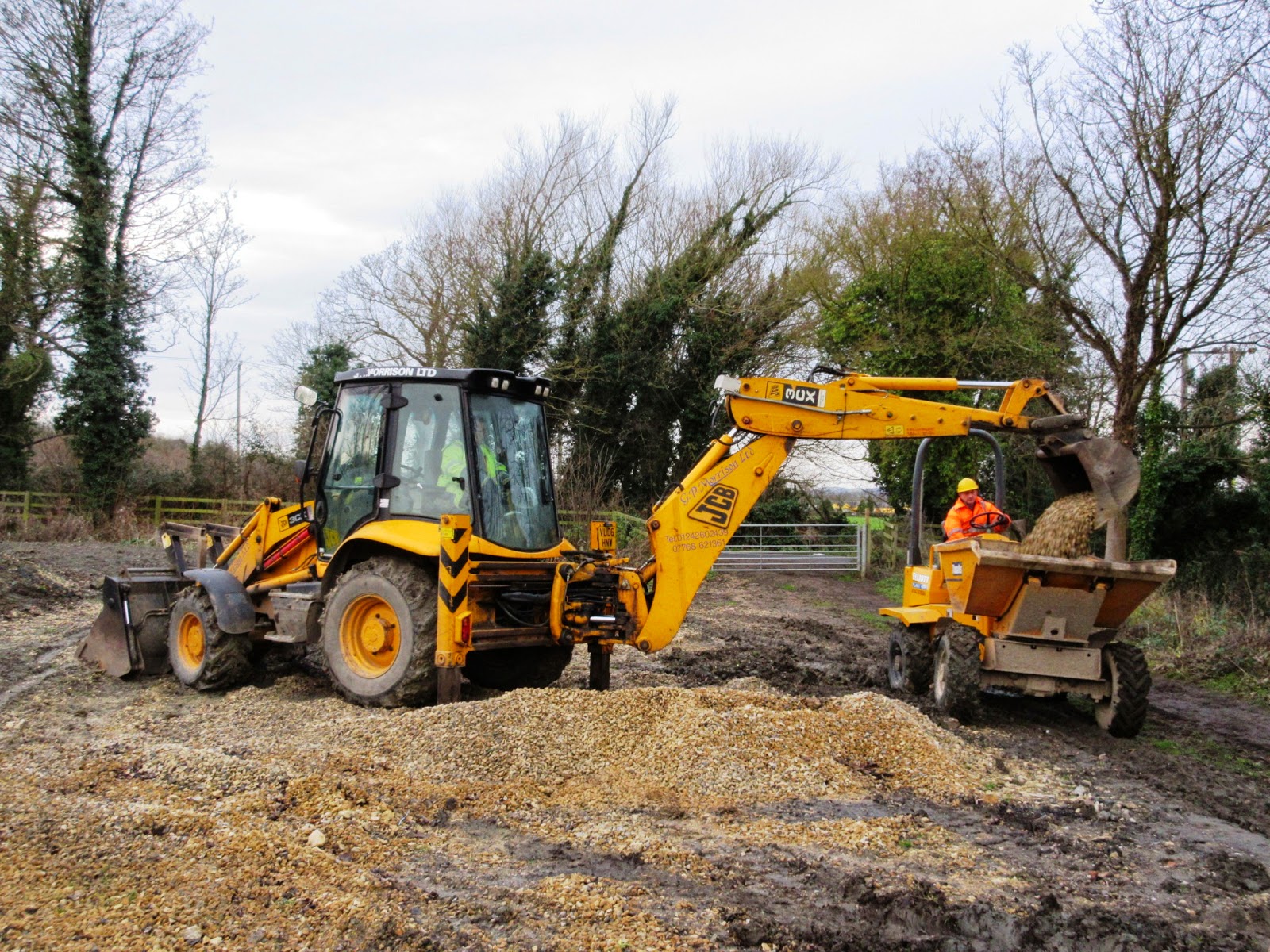 There were 5 main jobs  on the go -  The most challenging of these by far was the infill of the platform 1C. Step 1 was to scavenge as much clean ballast as was available  around the site. Here Steve W and the JCB and Steve B in the dumper retrieve 20 odd tonnes left from the bridge repairs. (finders keepers as they say!). Jo was behind the camera but also using the 1 tonne dumper as a back up. 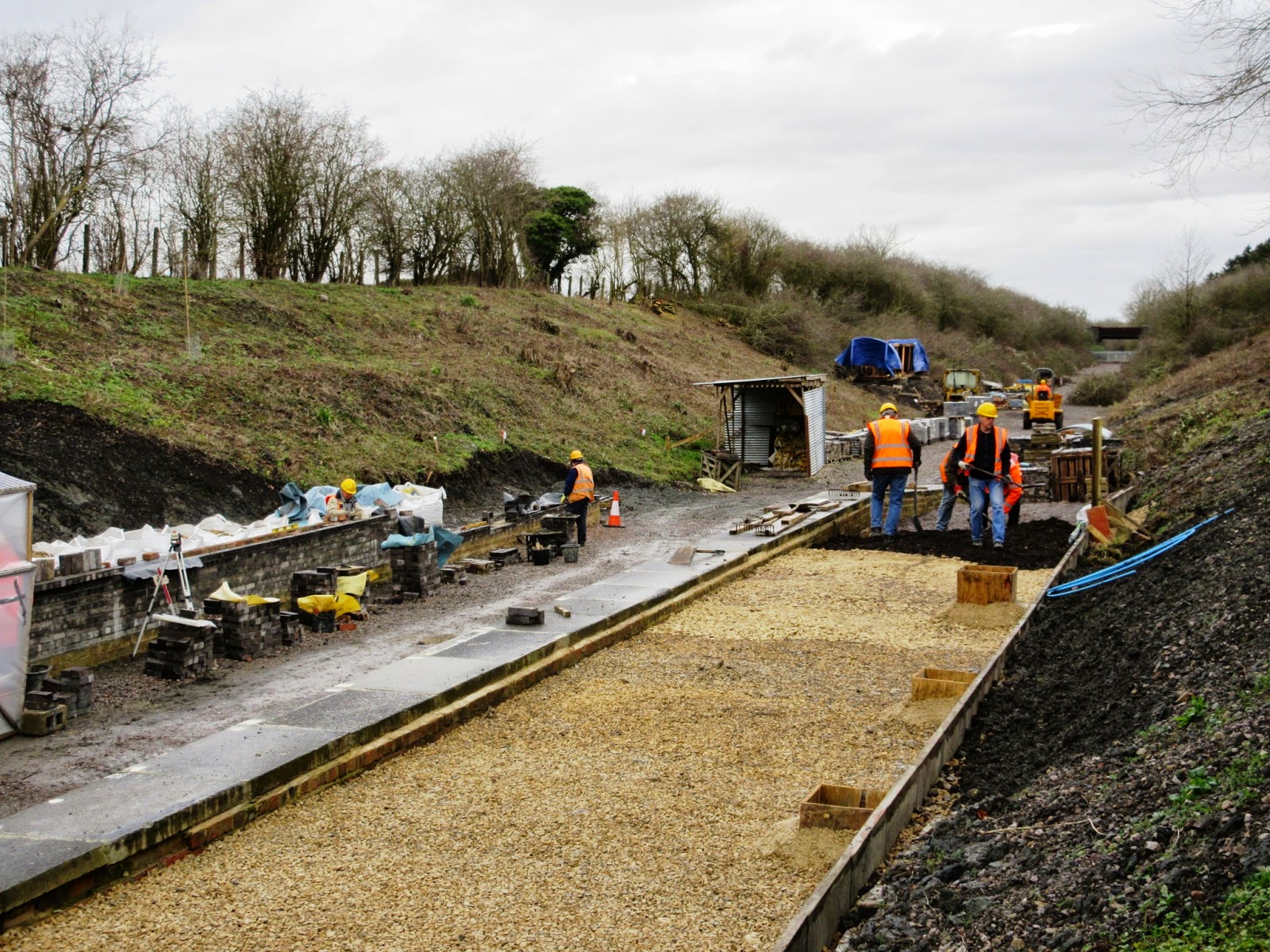 This was loaded in behind the platform which had previously been raked and rolled. Here we see very clearly the neatly rolled ballast. In the process the running in board sockets and lamppost sockets had to be raised and concreted in. In addition stone and ballast had to be placed behind the edging stones to balance the pressures either side. 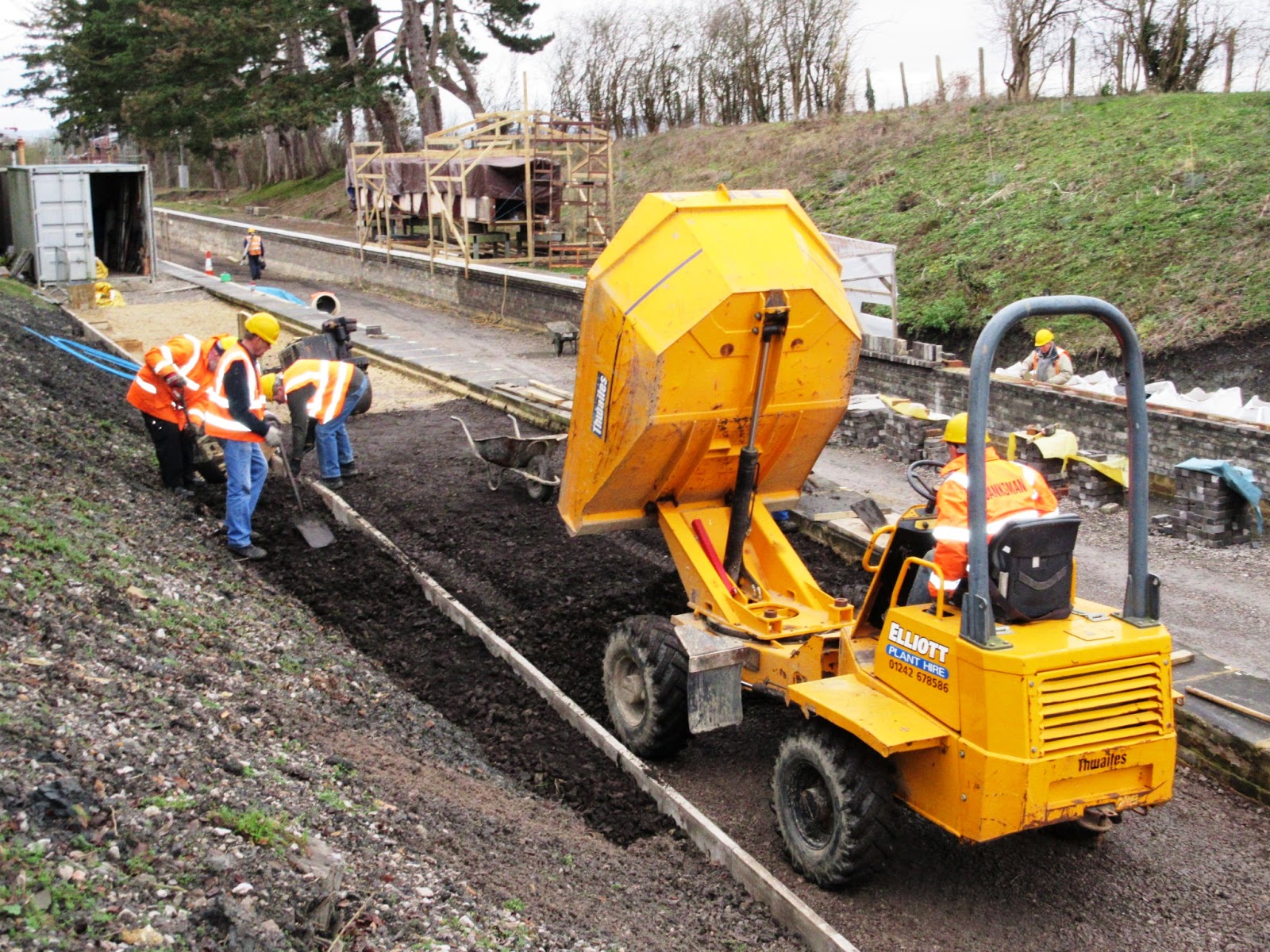 When the Cotswold stone ballast ran out it was a case of resorting to the old track ballast, skimmed off the other side of the Evesham Road Bridge. Its more than suitable - it lays like tarmac! 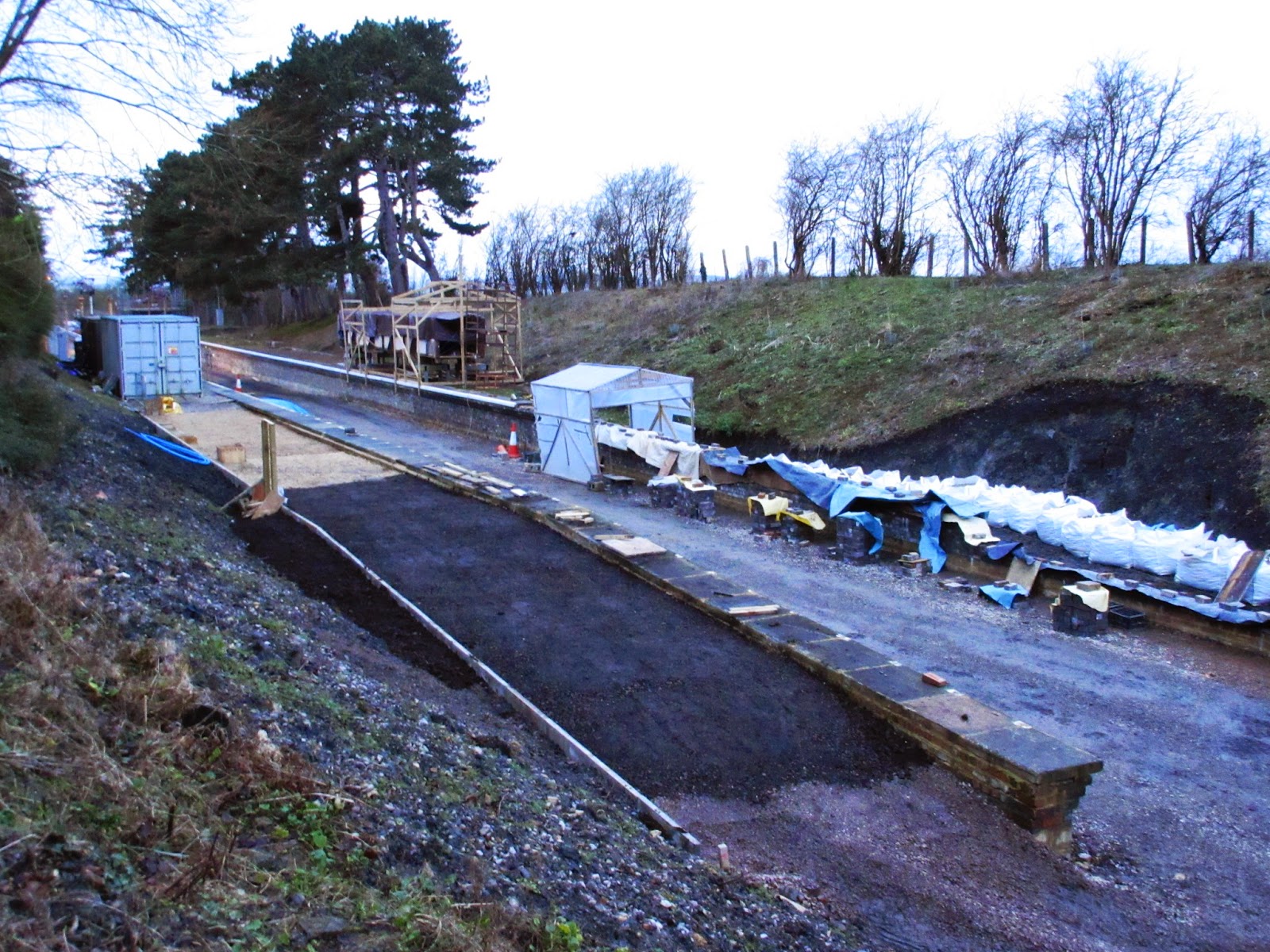 As darkness fell the job was pretty much completed. What a remarkable effort from the whole gang - if they could be mentioned in dispatches.... 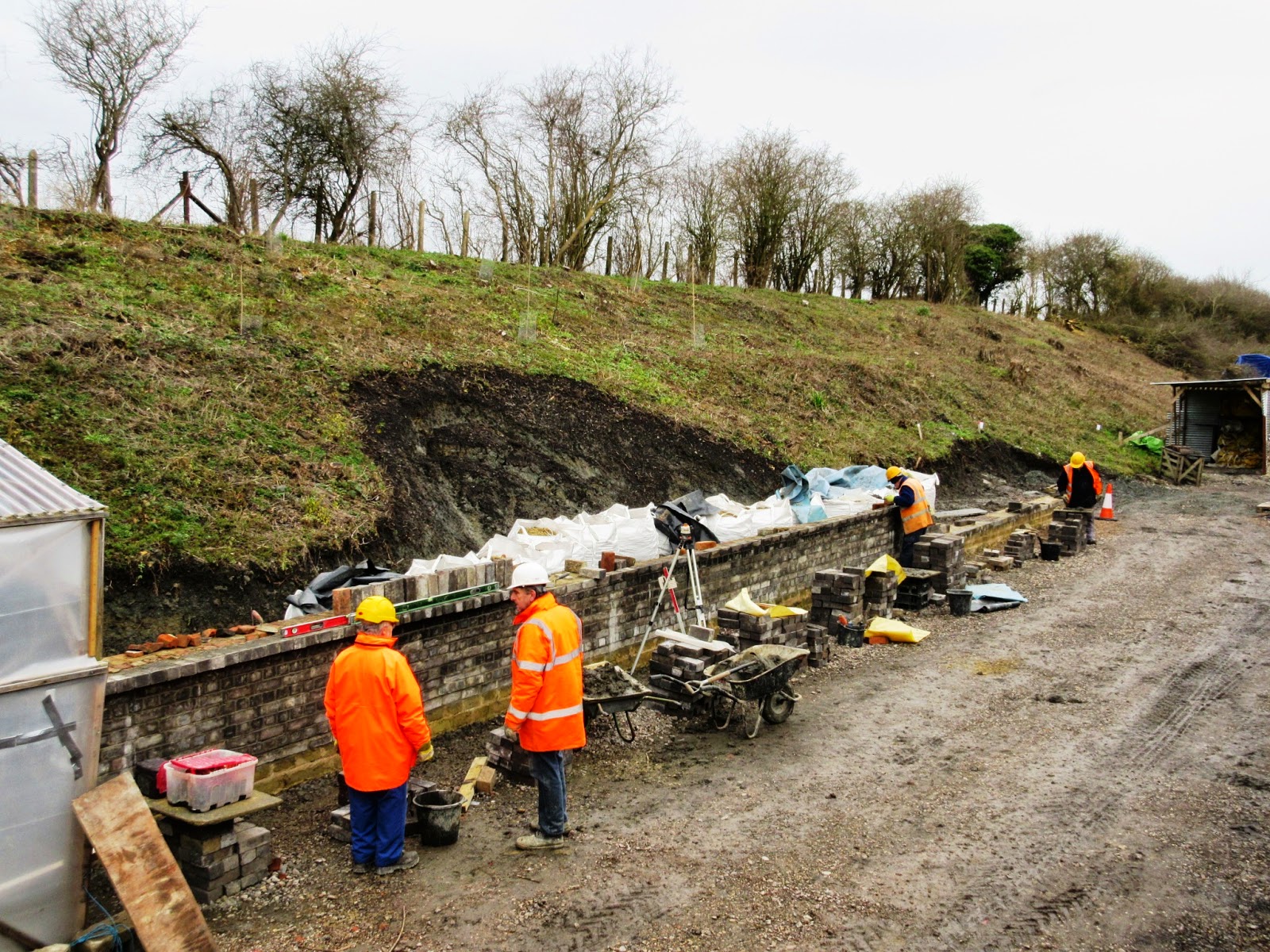 On the opposite side of the track bed equally determined efforts were being made to lay some more bricks in the 2C wall.  See Roger's report below.What is less easy to see from  this picture is the secondary bank slip in the middle of the previous one. Thankfully our retaining wall of concrete filled bags did their job and no harm was done, 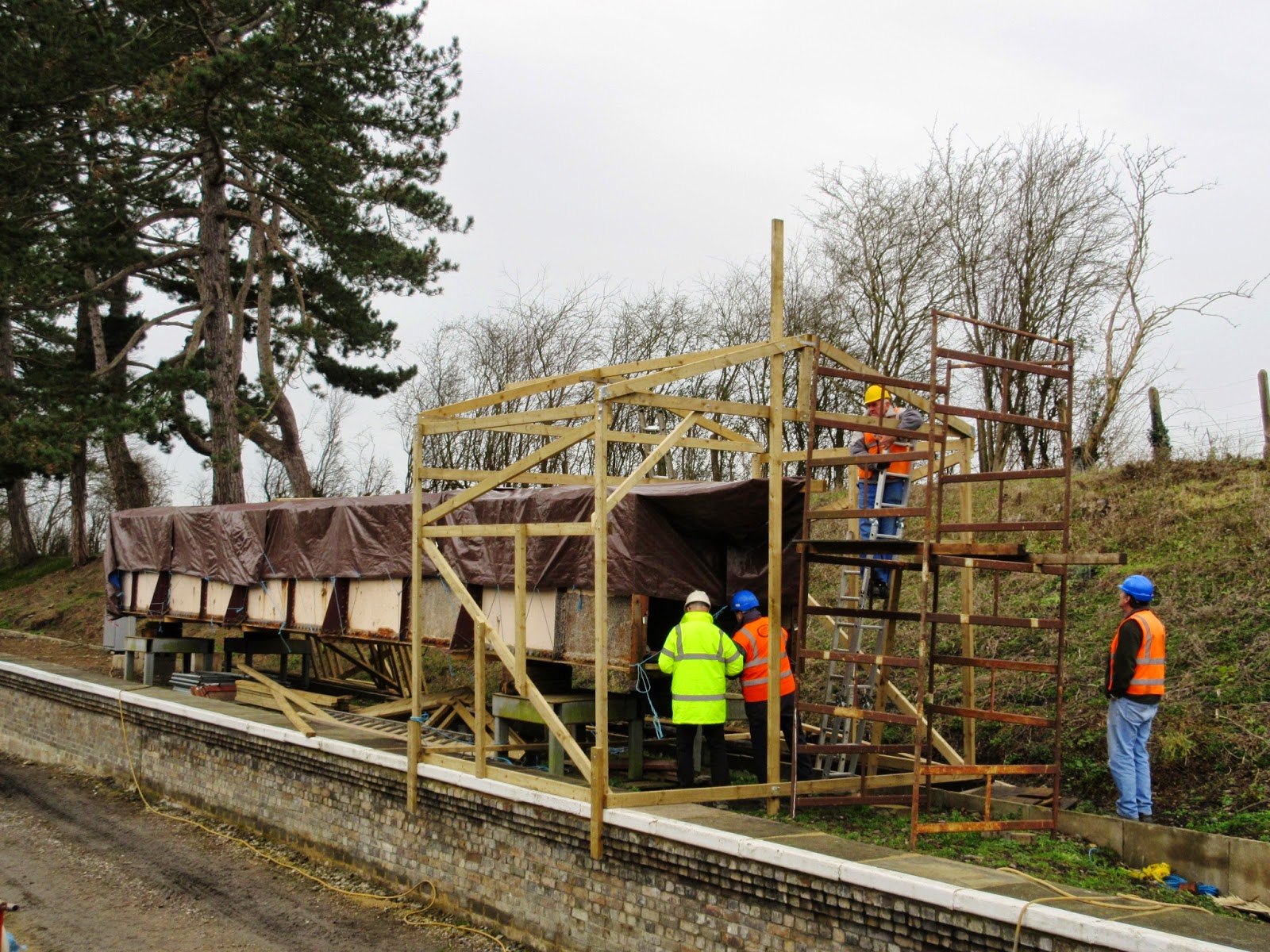 Slightly further south, the shelter for the footbridge span was being extended. This picture from earlier in the day doesn't quite do the job justice, but it is really coming along nicely. 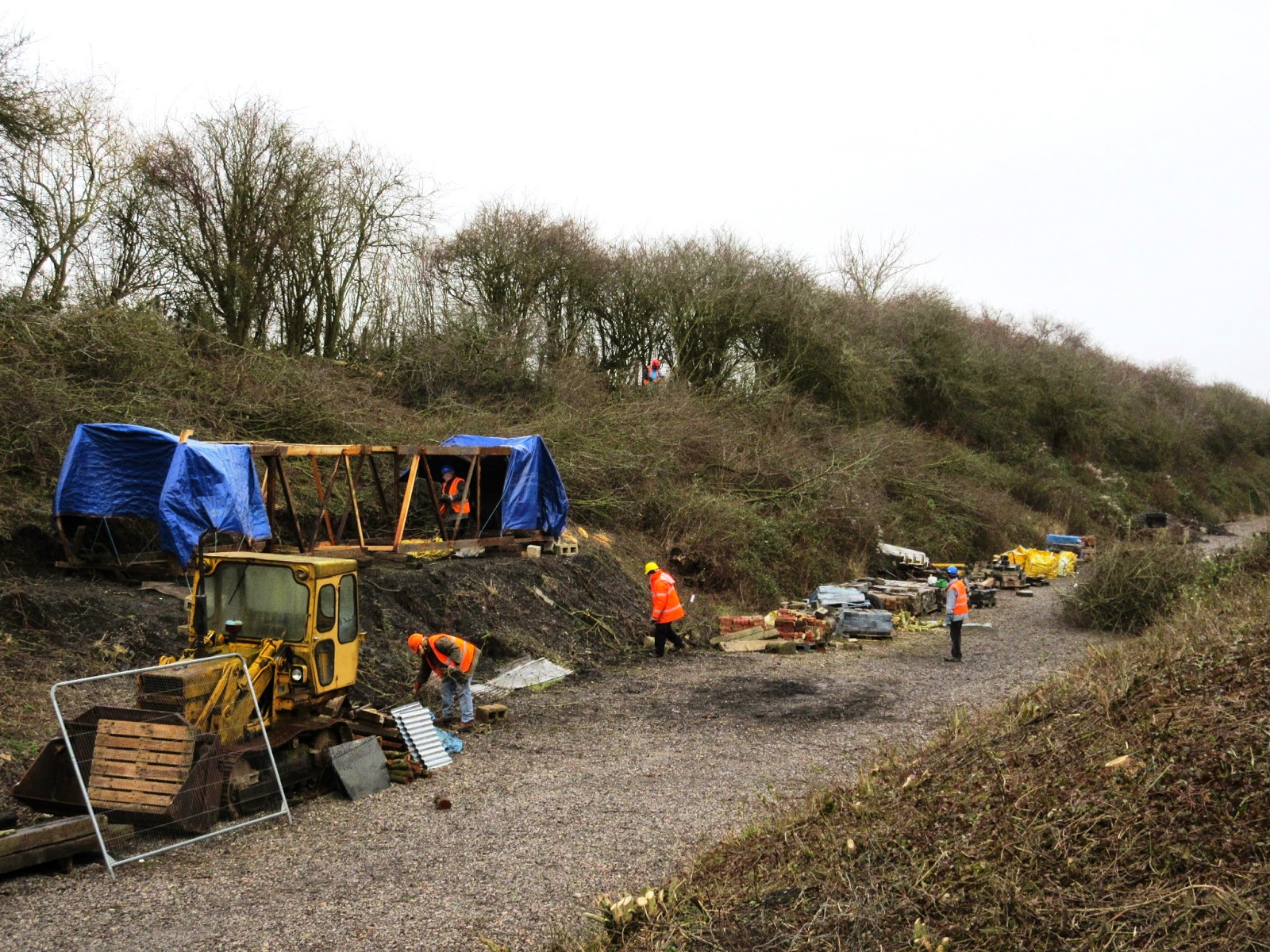 The hacking back of the vegetation on the cutting  has really become a time limited crusade to beat the bird nesting season. As you can see Brian the Chainsaw is making good headway. The tricky bit is keeping up with him to retrieve the debris. I feel a mass bonfire day coming on! 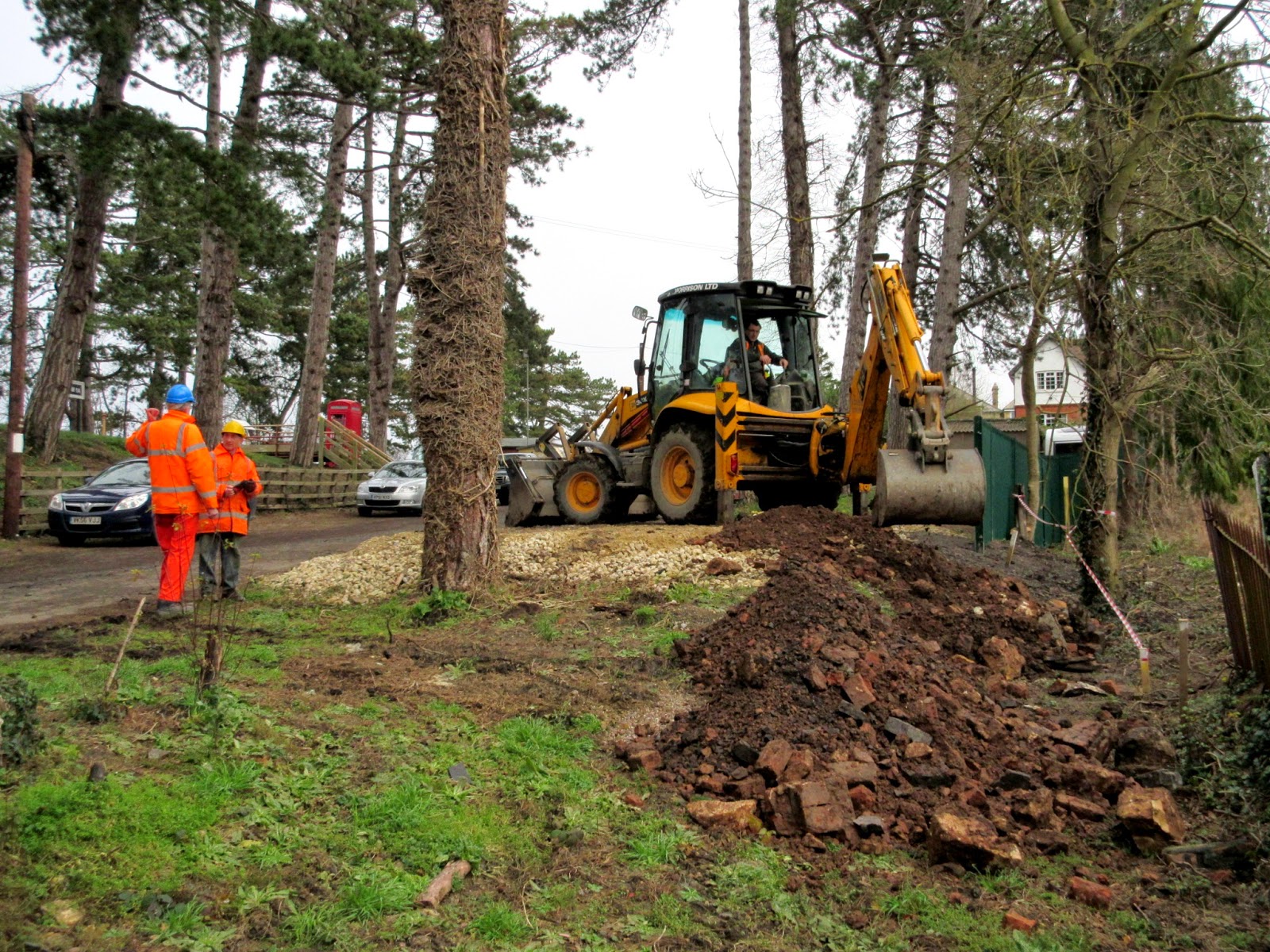 Down on the Driveway we plan to move the bric a brac shed  to the eastern side. In order to do this, and  to also continue with the fencing, a good deal of grading of  the  adjacent land is required. The JCB and dumpers were used to shift in some spoil before finishing it off. 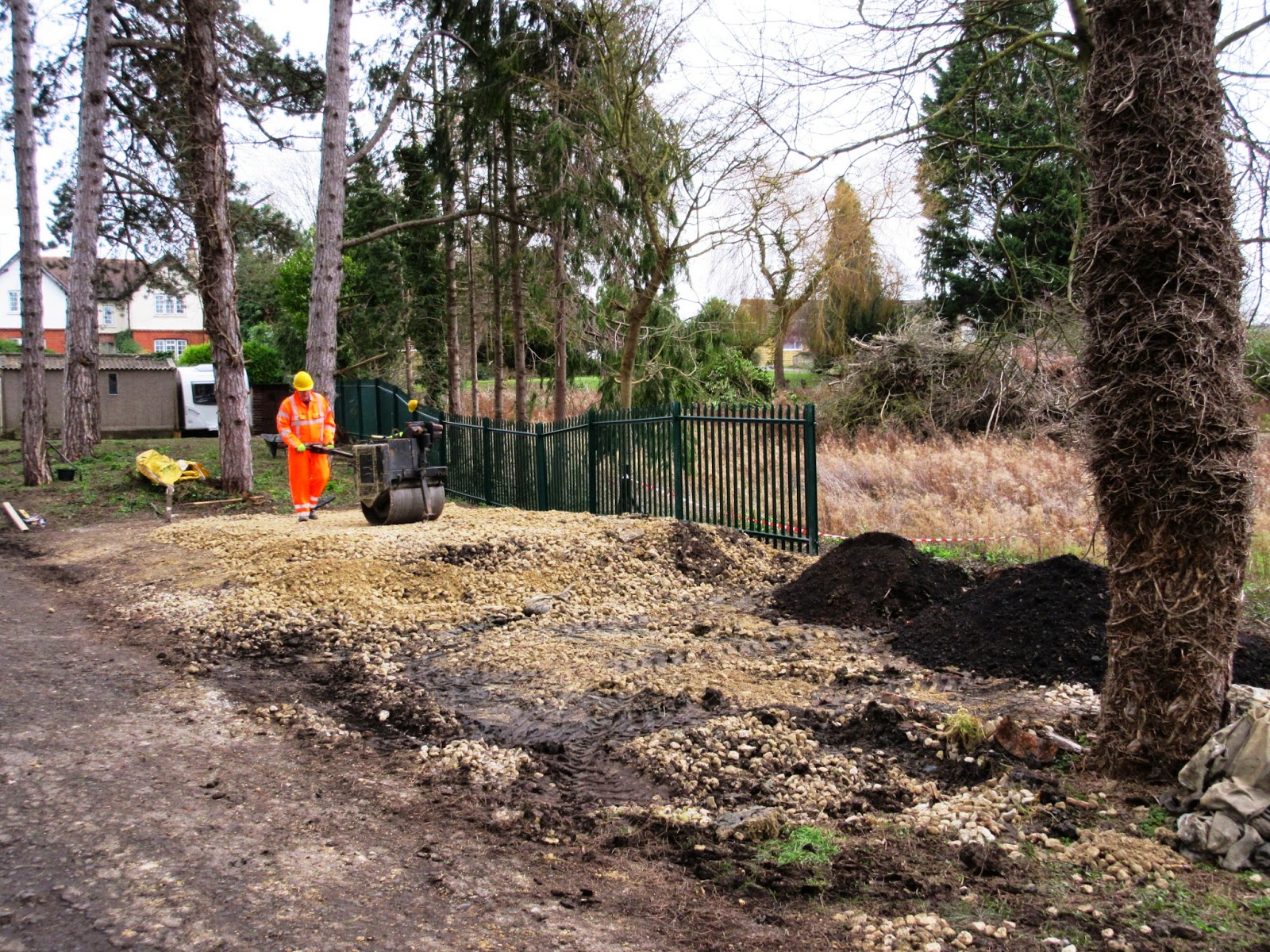 Unfortunately the   light faded as the JCB was finishing and so we will have to wait until Saturday to see the finished result. Here Mike S is rolling the planned area for the Shed. 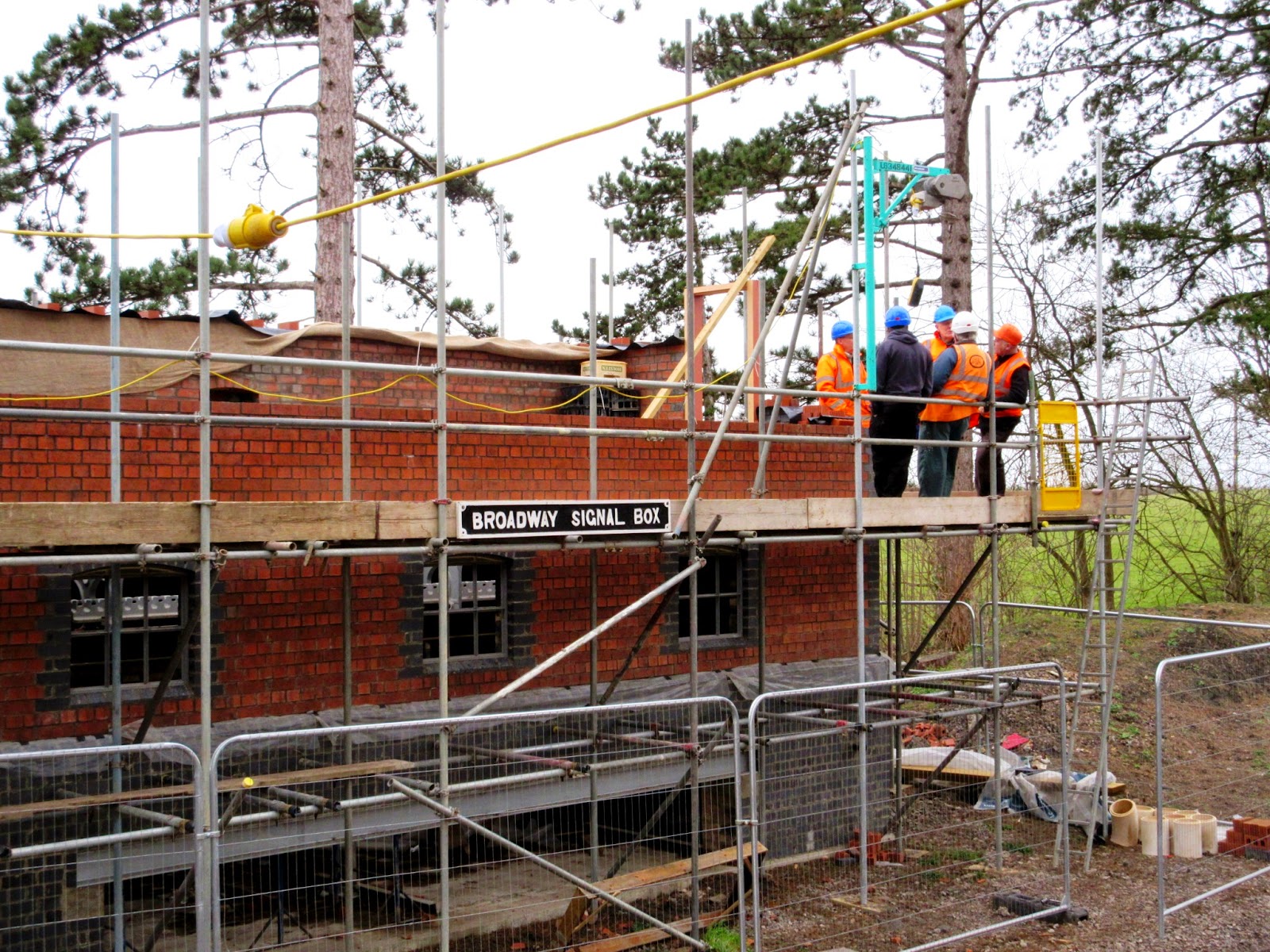 As an aside we had a meeting of minds on the next activities on the Signal Box. It was a very productive meeting and Signal Box enthusiasts will see some great progress over the coming weeks.


Finally a Platform Team update from Roger B

Two teams were in action today.

Team 1 Platform 2c Bricklaying.
Throughout the day we were hampered by high winds and rain/showers.

Clive completed a course of Blue Stretchers on section 3 and Peter H completed the backing up on this section.

Bob Jones marked out section 4, The Slope, and laid the first course of Blues.

Team 2 Platform 1c.
Under the guidance of Rod and Terry the Lampost shuttering and electric box support posts we're concreted into place before platform backfill could commence.

The remainder of the day was taken up with backfilling and rolling this section by Terry, Rod, Chris and Ian, while Dumper drivers Steve and Jo kept a steady flow of ballast  which Steve Warren in the JCB made sure each journey made by the Dumpers was filled to capacity.

I am  pleased to reported the backfill exercise was completed in last of the day's light.

An excellent performance from the team.

At what point will the platform gap in front of the signalbox be filled in? Will it be on completion of the box structure, or will it be left as one of the last jobs to be done?

I'm also wondering if completion of the box will be followed immediately by the start of work to reconstruct the lever frame.

Hi Nigel,
Some good questions..
We will complete the platform wall in front of the Signal Box once the foundations of the Waiting Room are in - June 2015.

Assume therefore that the foundations for the platform 2 waiting room will start quite soon. It looks like there aren't many days work left on the platform extension or signal box brickwork!

Presume you will have to build a form of bridge to span the hole where rodding and cables emerge from under the platform? Will that be done in reinforced concrete beam and block behind a blue brick frontage, or will a cast slab need to be formed?

All the brickwork towards the remaining jobs on platform 2 doesn't feel like that much, especially when compared to all that's been done to date. Quite a nice prospect for you all to be thinking towards closing the platform one gap later this year as well perhaps....