What a drizzly start to the day today! Mud clung to our boots in great clumps as we tramped round the site. Of the 13 volunteers who reported for duty, four bravely took on the task of completing the drainage channel on the eastern boundary, so that the fencing can continue.


This job is now almost completed, with just the back filling left to do. Then we can continue with the fencing to mark the boundary on the eastern side.

Once the dumper had been released from the pea gravel job, two volunteers took it down to the car park field to bring up the best of the engineering bricks from the former Brunel sheds at Paddington. We extracted two loads here, and some infill material now remains.

Readers will be wanting to know if we worked on the signal box today - the answer is: Yes we did! As you can see, four volunteers were up on the dizzy heights of the new GWR box. Three laid bricks, while a fourth volunteer spent the day fruitfully by fitting the short joists up to the second stringer. 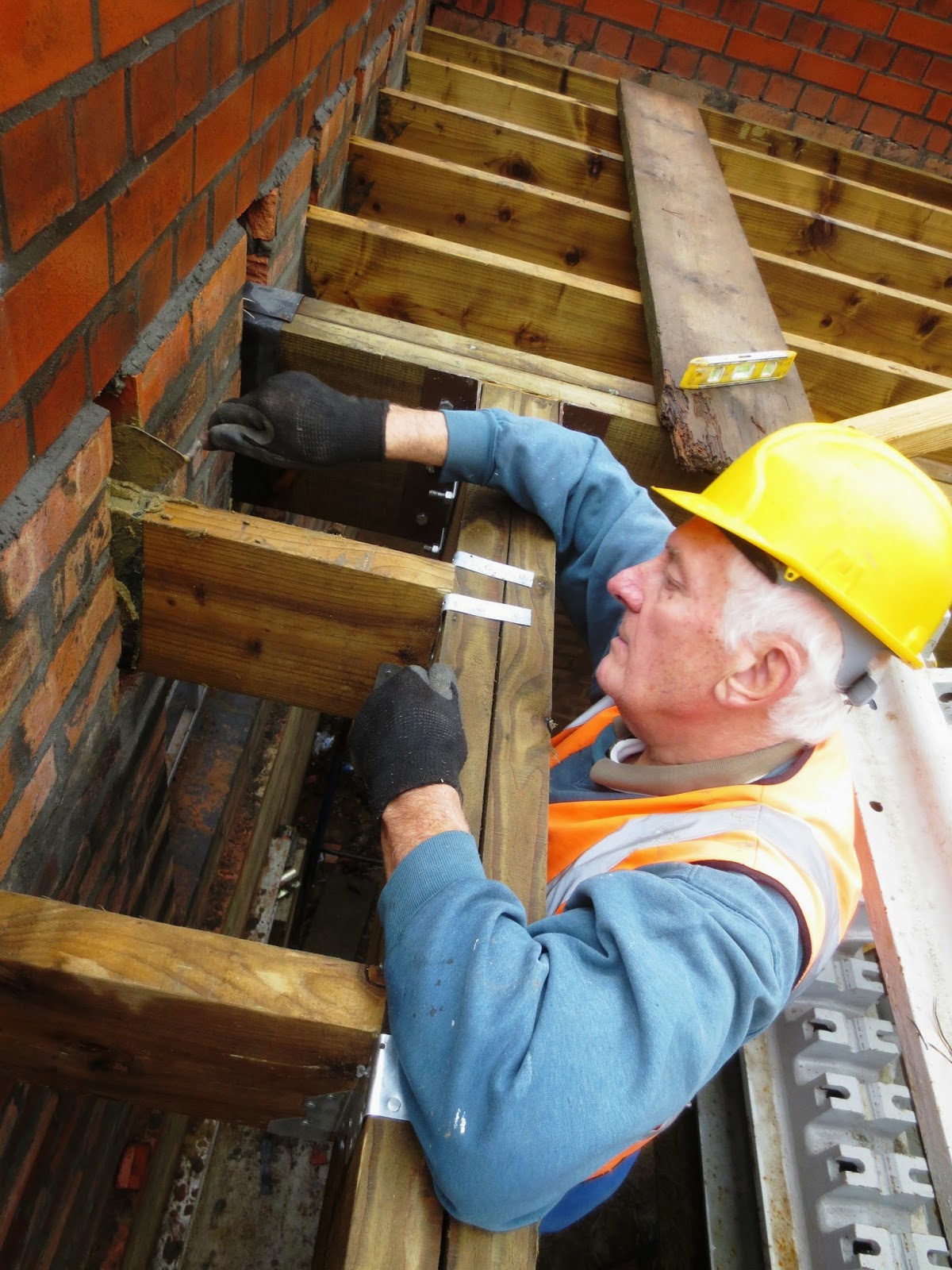 In the picture here we can see Peter Q fixing the short joists into the wall with mortar.
Easy enough you might think. However, what you do not know is that a half an inch had to be sawn off each joist in order to make it fit, and that a gremlin had inserted itself into our 110v transformer, which refused to feed our new electric saw.
Hence every joist had to be sawn by hand first, then came the fitting and this picture. It's never a simple as it looks. But they are in, and they look great. That's the joists ticked off the list of things to do.


Upstairs, Tony and Bob built a tower on the SW corner, which also fitted up to the (dummy) window on the side. A second dummy window can be seen on the rear. The actual window for this has been ordered and should be delivered any day now. 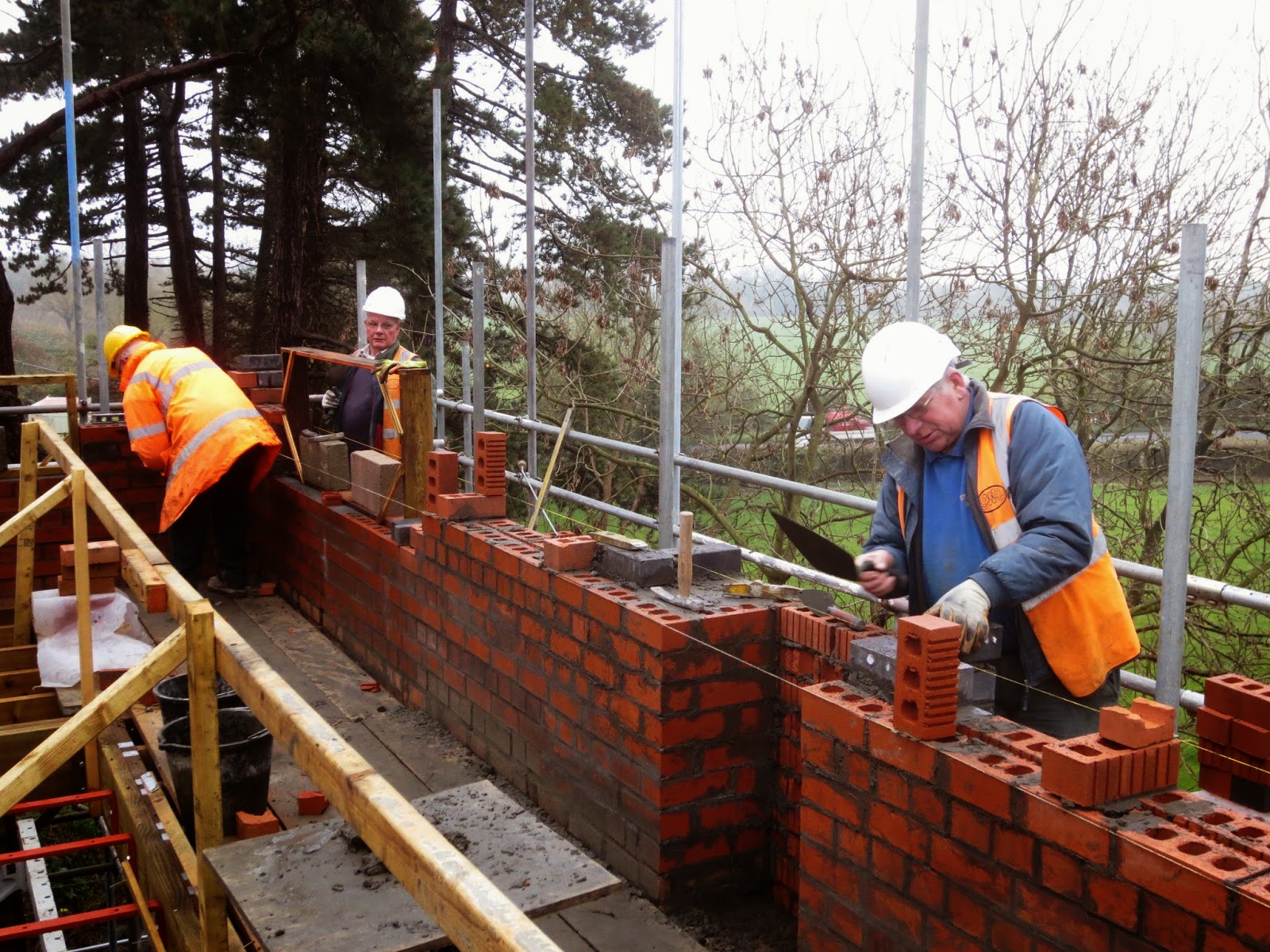 Another sterling job was done by John C on the rear, where he raised the rear wall by 5 courses around the chimney. That wall is looking quite high now. Lovely decorative work in reds and blues too. 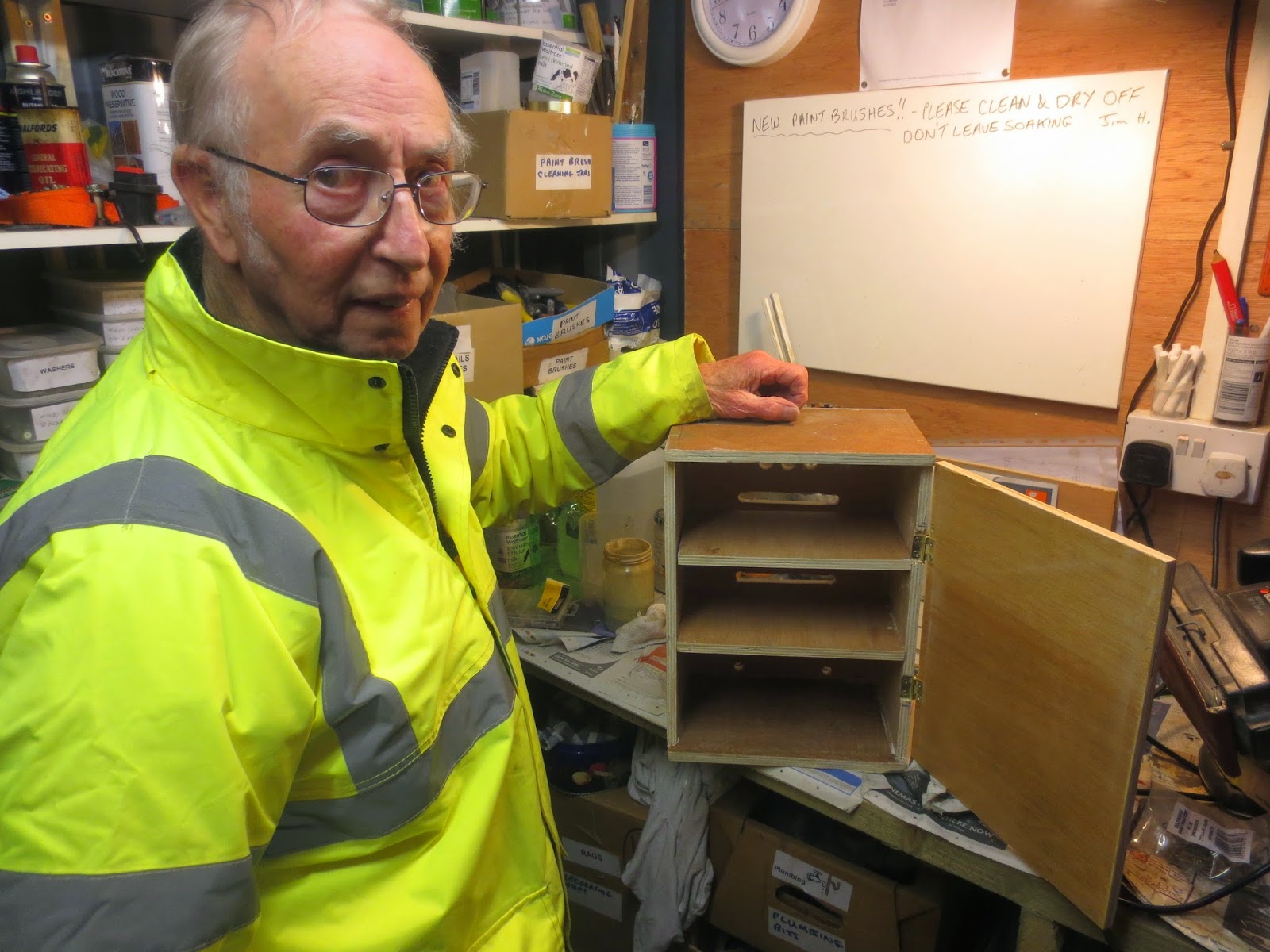 Not so often mentioned is Peter's carpentry work. Here he has made a lovely little cupboard for our broadband connection, which will be located in the bottom of the phone box - a very suitable place, with its BT connection! 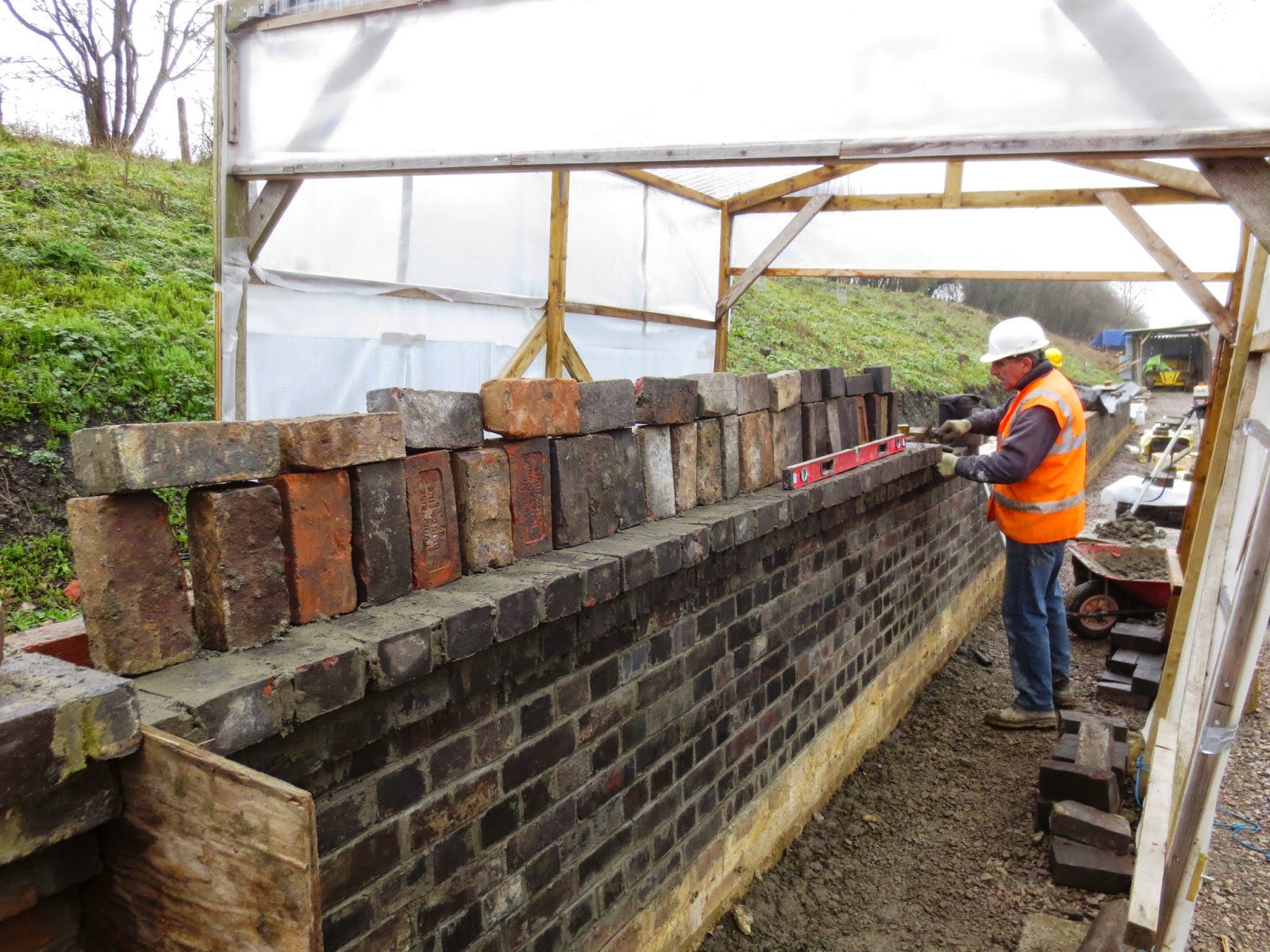 Profiting from the luxury of the bricklayers' shelter was Roger, who spent the day laying a very professional line of corbelling blues on 2C. Behind him, we can just make out Peter H, who advanced the cause with a layer of reds on the middle section of 2C. These reds are freshly cleaned, and come from the interior of Winchcombe goods shed - GWR, to GWR again. We recycle. Those dark blues underneath are from Avonmouth.

Having cleaned themselves up from the ankle deep mud of the drainage ditch - note the new trousers - Terry, Rod and Mike even had time to lay a number of slabs on the northern end of platform 1C.

PS A big  "thank you" to all who turned out today and managed to do everything on the to-do list. Brilliant!

Hi Bill
Nice to see some progress on the signal box.
I see that you are putting another window in the rear wall, not shown on the planning application drawing. There are a number of differences between the approved drawing and what has been constructed e.g. 3 windows to the west elevation, compared to 2 bricked up ones shown in the drawing. Also, the height of the locking room is clearly higher than the 1825mm shown in the planning drawing. Are you happy to depart from the approved design because it's an operational building for the railway (and as such didn't really need planning permission)? Or perhaps these changes are "de minimus" i.e. not significant in planning terms?

Peter,
We had a meeting with the Wychavon Building Controls Department in August to discuss some divergences from the plan. We felt these changes were required to introduce some historically accurate features. They probably fall into both categories that you describe above.
Bill