What a good day the weather was gloomy from time to time, but 28 Volunteers and the GM Contrators spent a really productive day on Site. 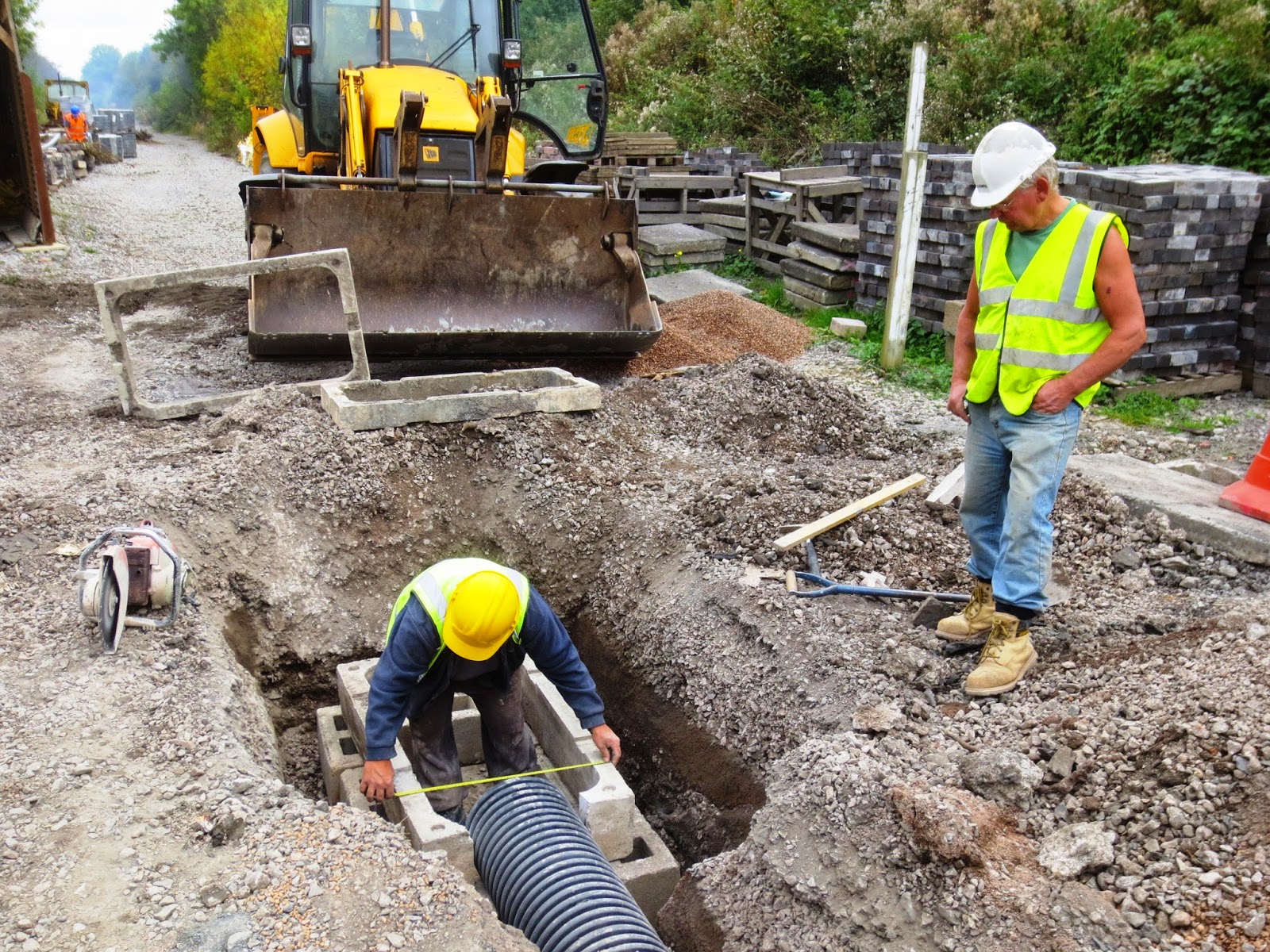 Firstly, the centre track drain was finished off
exactly to  specification and a great job was done. In addition the two side catch pits  adjacent to the one in the photo were cleaned out in anticipation of lateral connections being made. 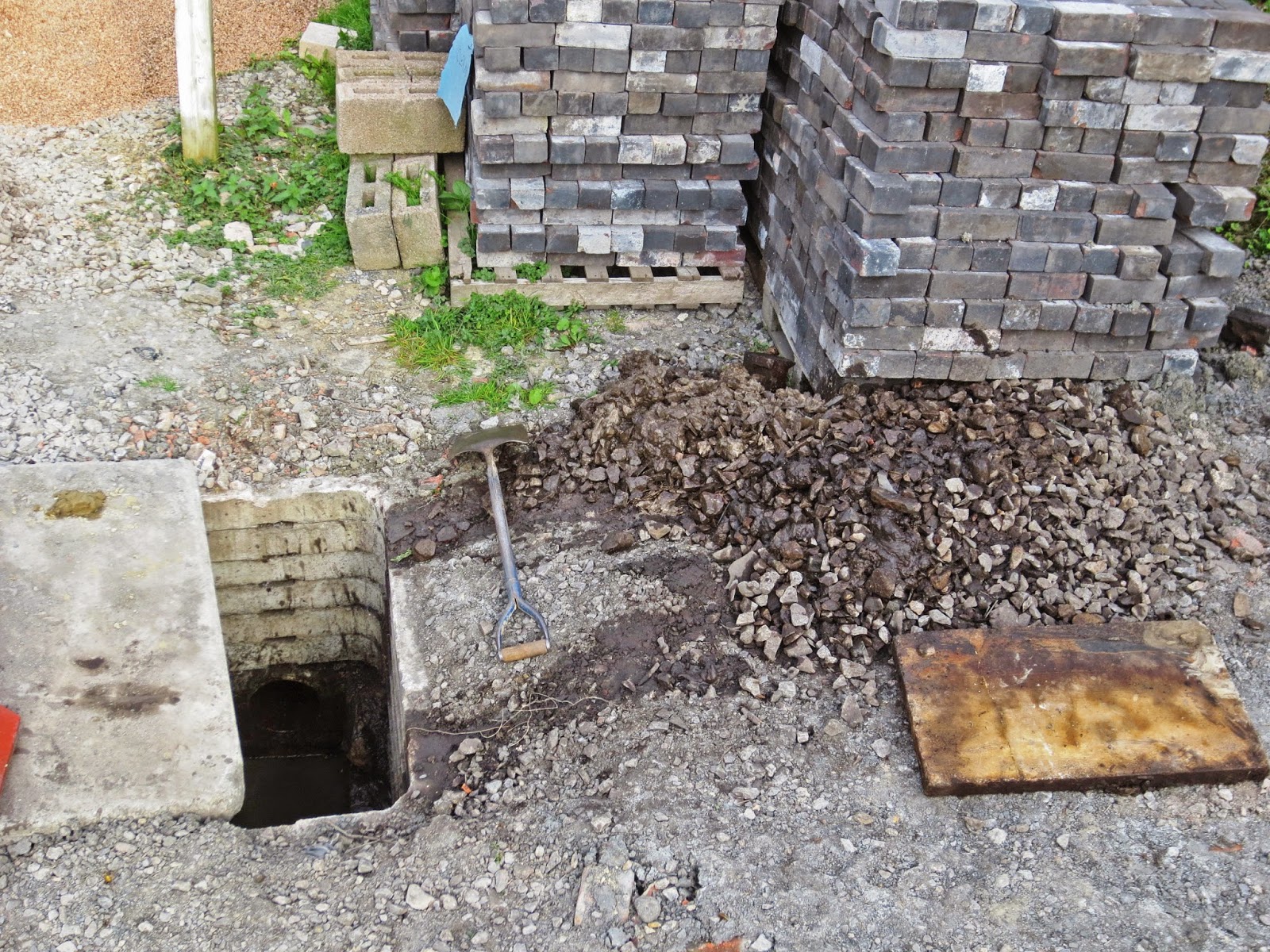 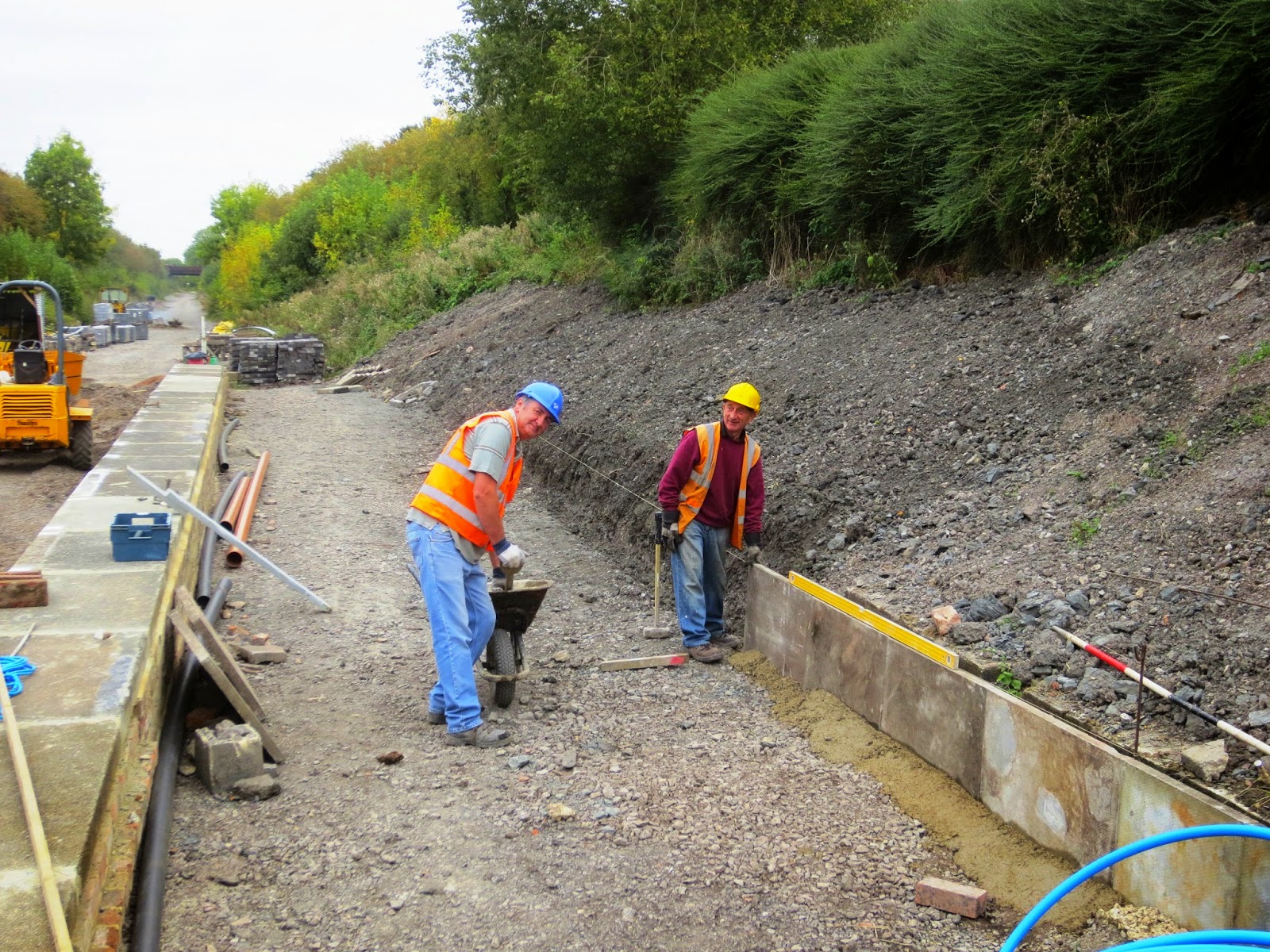 At the same end of the site work was started on slabbing up the rear of platform 1C.  As I've said before, this is definitely a three Weetabix a day job! 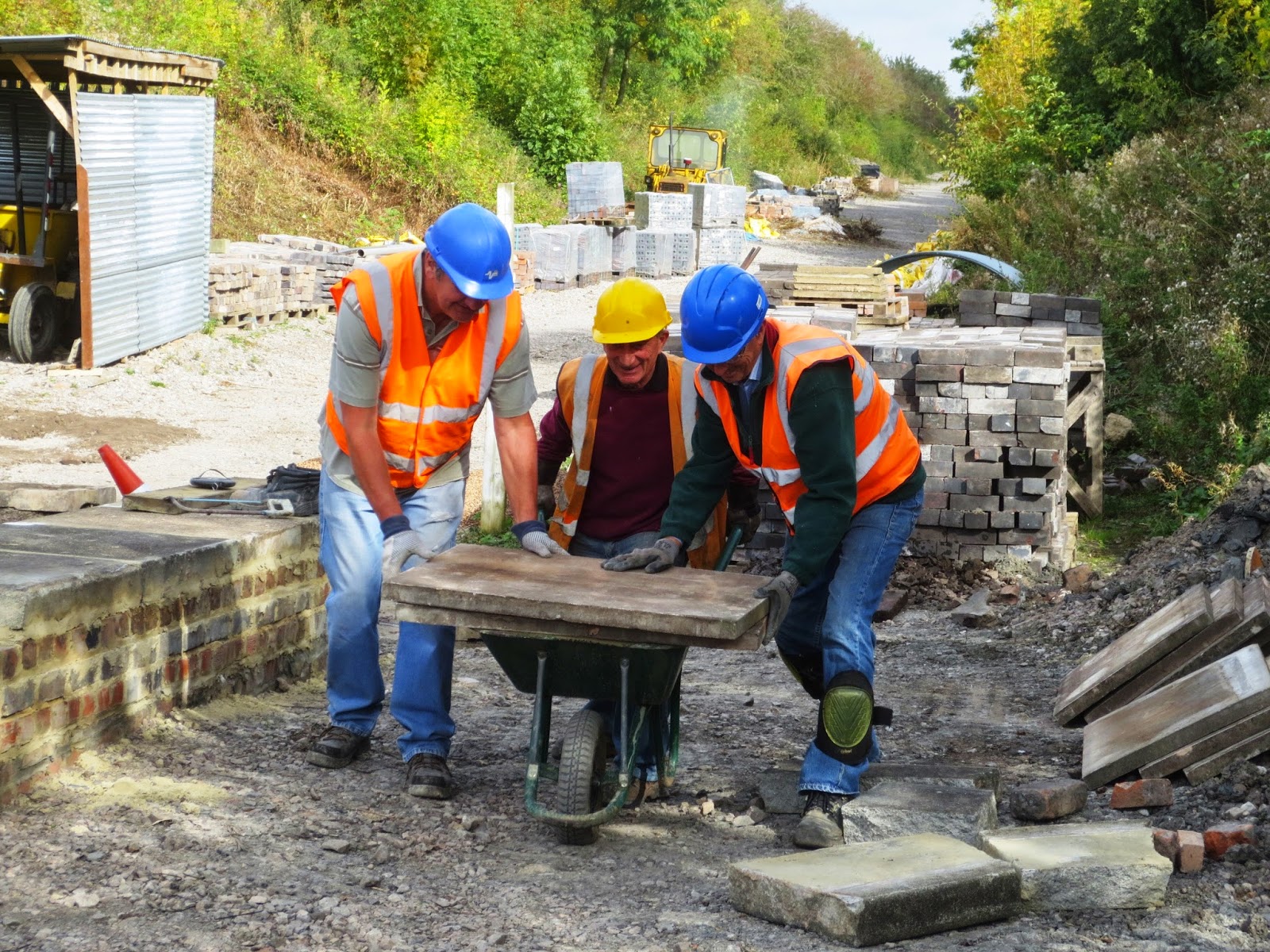 Here Steve, Dave and Roger toil with the barrowing of the slabs. How well they look in their finished locations. On the opposite side the block laying on 2C was proceeding at a pace. Here Martin, Clive and Peter have started the 100 mm  blocks. In the background Roger B is setting up the next section. 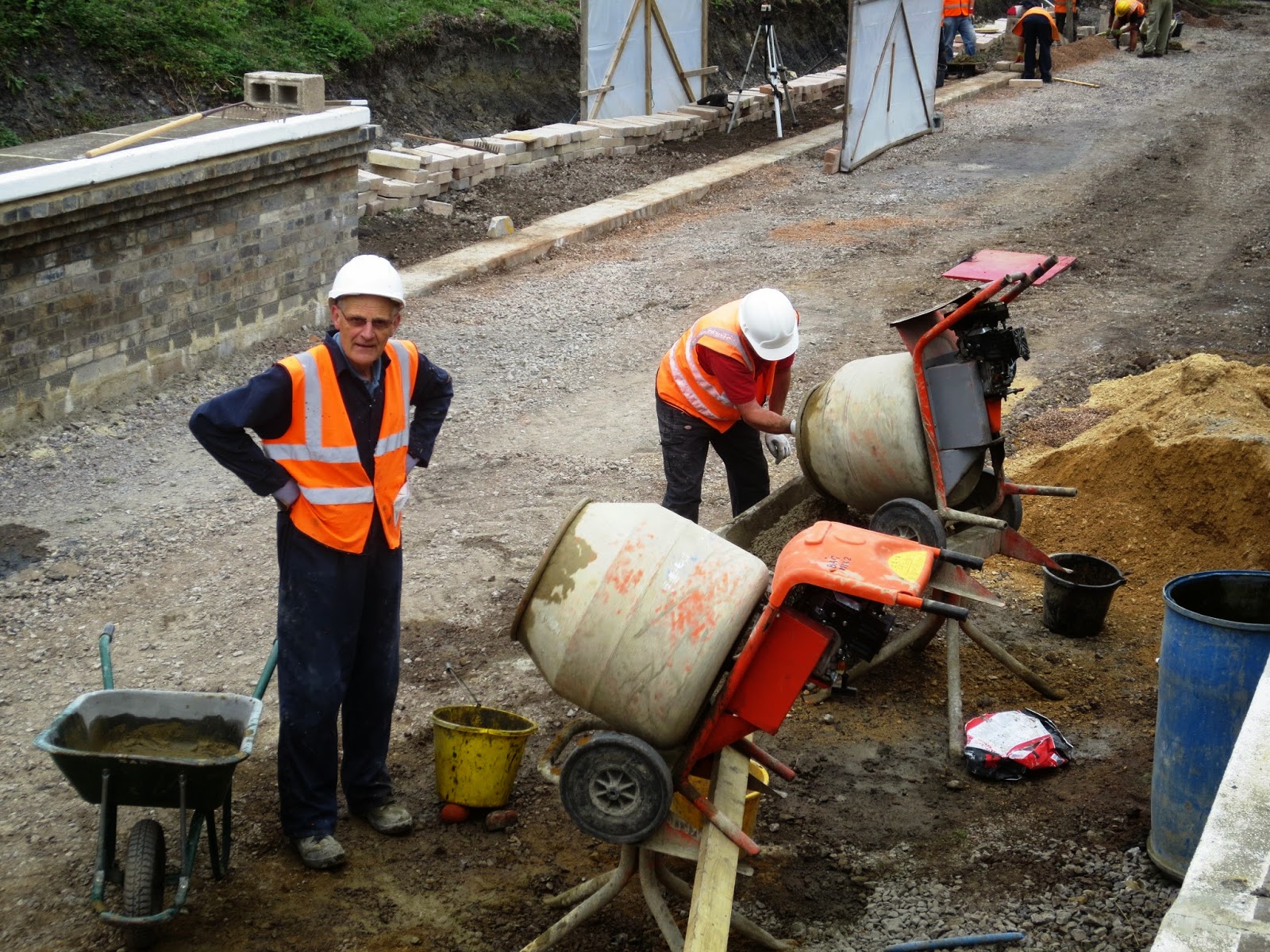 Of course none of  activities above would be possible without the hard work of the muck mixing crew. Here Keith and Paul stuck to the task most of the day. 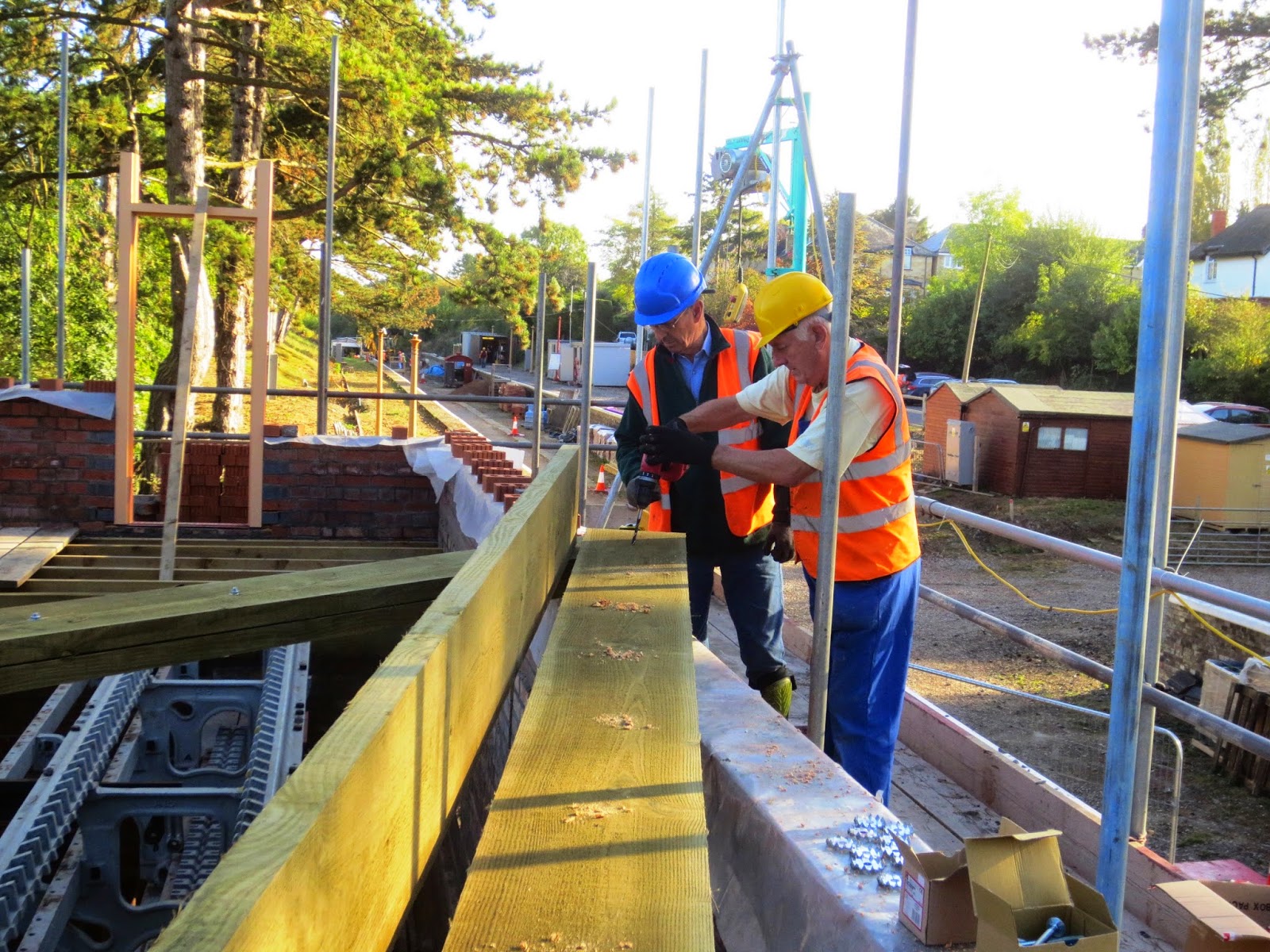 At the southern end of the site some more work was completed on the Signal Box. Here  joist trimmers are being bolted together. 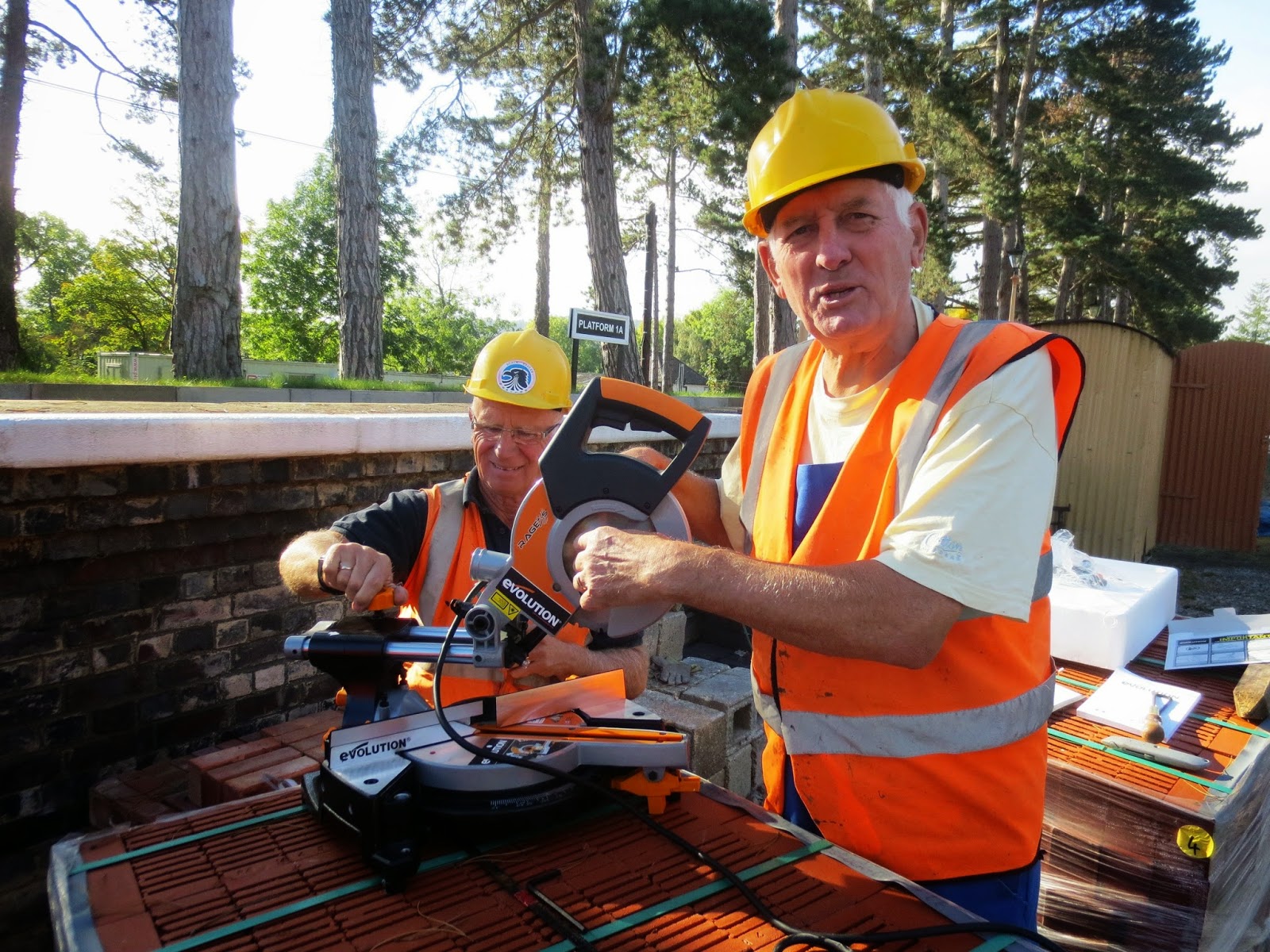 We have also invested in a new mitre saw for continuing with the carpentry. There is nothing like a new piece of equipment to draw a crowd. Here Tony and Peter Q  are about to give it a road test. 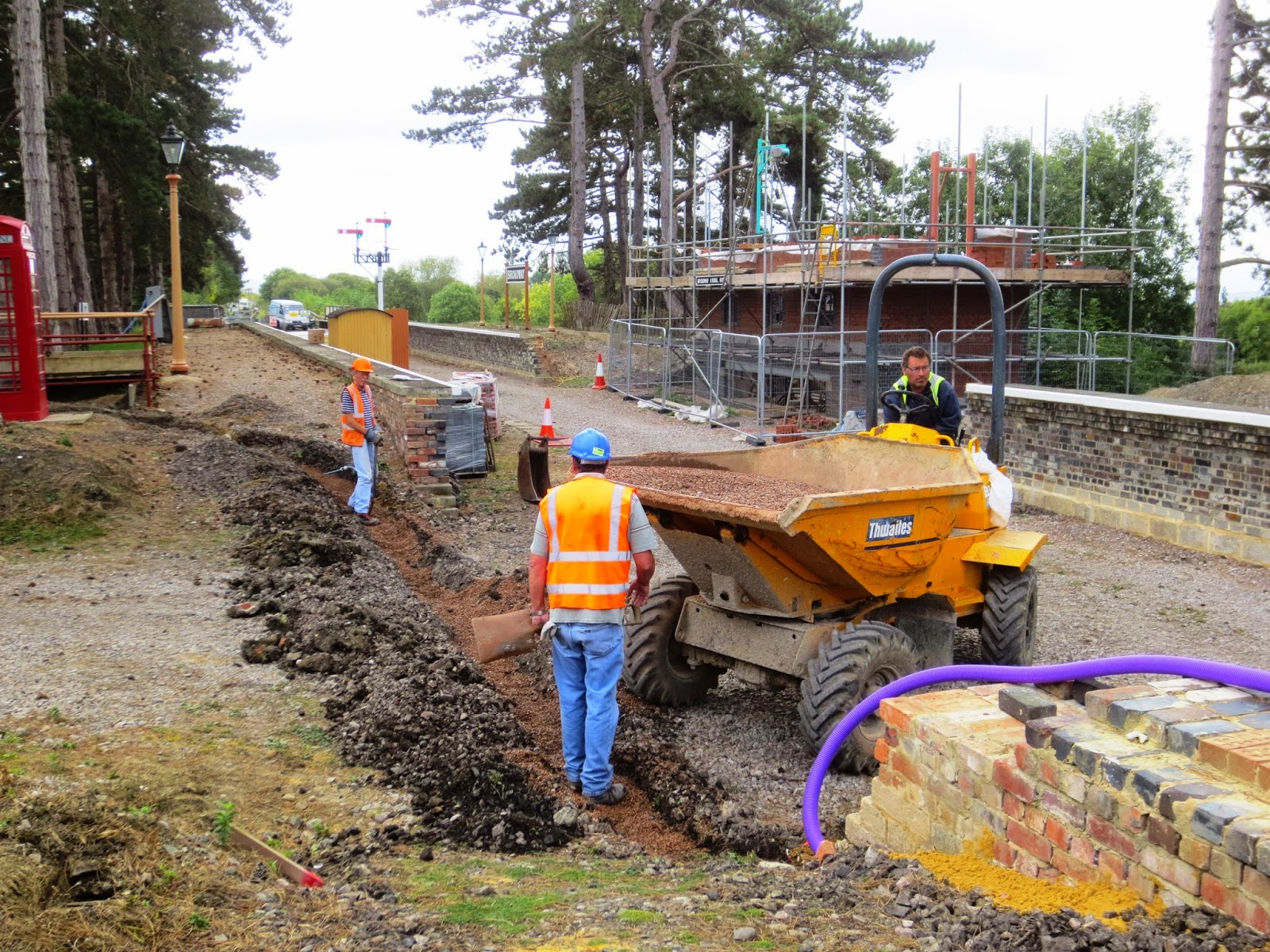 On the opposite side of the trackbed the comms ducting was laid across the driveway. Here Gord and Dave bed the ducting in before cover with ballast. 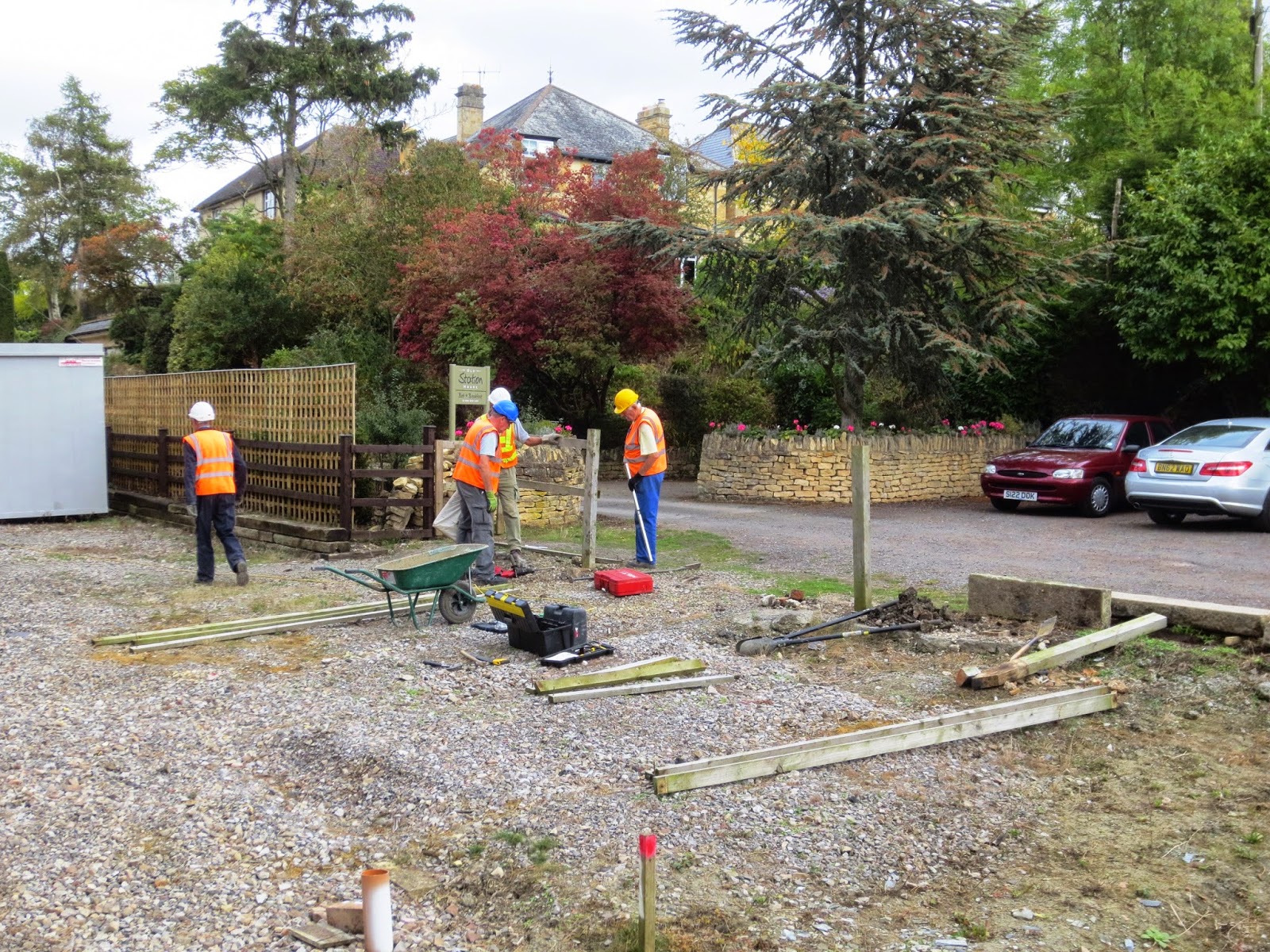 Up on the station/driveway fence line Jim H was making some nifty  secure sockets to put the fence posts in. This is  being carried out specifically for the necessary maneuvering to get the centre span  of the footbridge onto site. In the longer term it will be used to get plant and materials into position for the station construction. 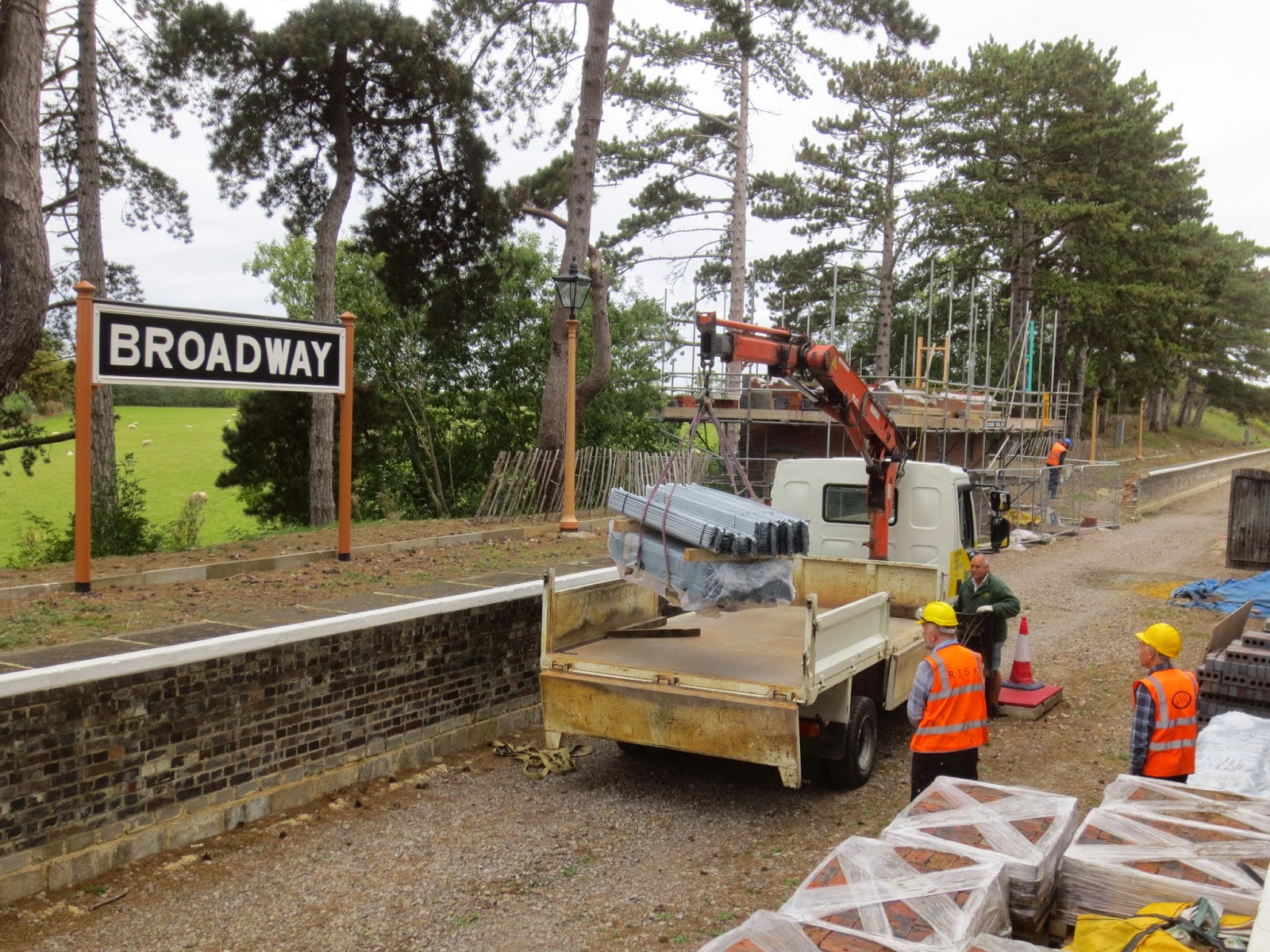 Mid morning we had a delivery of pallisade fencing which required hand loading into secure storage. Dave B and a crewe were undertaking this and I think they all had longer arms by the end of the day! 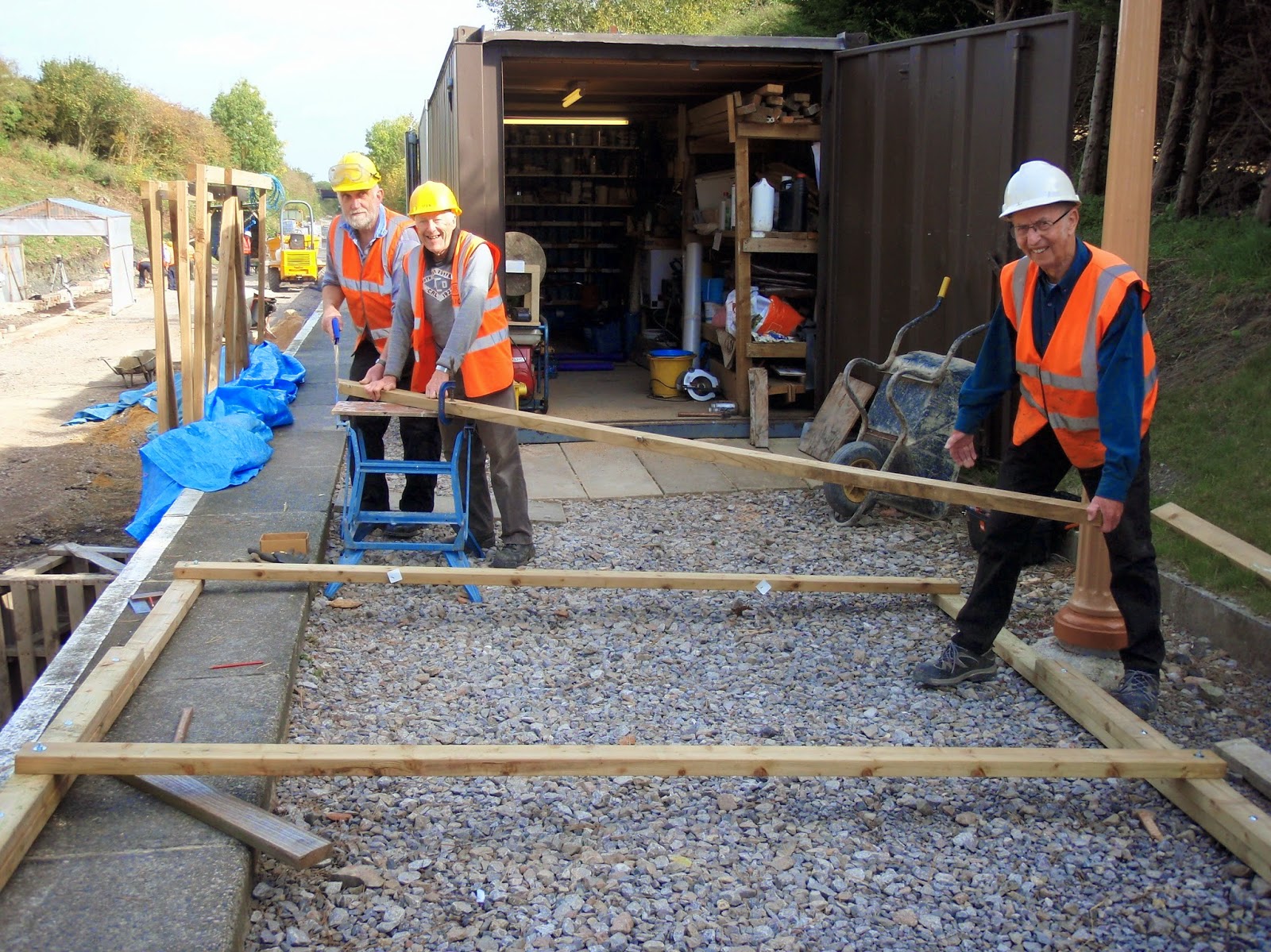 Last but by know means least  a team were working on the fabrication of a booth (the Spruce Goose) to act as weather protection and sand blasting containment  for the footbridge span. Ian Vic and Peter in action on this tricky bit of carpentry.

A very productive day from the Platform Teams.

Platform 2c, 14 Blocks were laid to complete the Block Laying task.
This task was then completed by in filling them with concrete.
On Platform 2c the Drain Pipe was laid and completed using an in fill of Pea Gravel.
Once the pipe was laid, Steve Warren of JCB fame provided the back fill to complete 2c.
Also on Platform 2c, 50 metric blocks were laid on the first course.
Platform 1c 12  3x2 retaining slabs were concreted in.
Finally Steve Warren did a superb job in completing the Central Drain while at the same time assisting with other tasks across the site.
We are very fortunate to have such a very skilled, adaptable and enthusiastic JCB operator as Steve to work with us at Broadway.
Big thanks to all of the team ( to numerous to mention) who worked across the all of the various Platform projects today.
We certainly moved the Broadway Project forward to day by having lots of enthusiasm and great team work.

I echo Roger's sentiments on the camaraderie and team spirit  of the Broadway Area Group - it is second to none. My thanks to everyone for their efforts today.

Hello Bill,
Another amazing report, and tremendous effort from the volunteers!
So, a quick question, when the platforms are built and the signal box is weathertight, will the P/W start laying track? Could you have a functional trackbed, while you are building the station building, not for passengers, but maybe for building materials etc?
Thanks,

Its a nice idea but you need maximum accessibility/flexibility during the whole construction phase for plant movement, deliveries and material storage.

as always, a joy to read. you are making fantastic progress. thank you.

On your report you mentioned the slabbing of '2c'. I looked at the photo and thought I must be losing it (not to be ruled out by the way!).

Coming up in a week or two, looking forward to it.

Just keeping you on your toes....