I was on a shorter reign than usual today but  I did get to  see a tremendous amount of hard work going on  among the 27 Volunteers on site. The weather stayed friendly enough and a wide variety of  jobs were on the go.  Where to start?

Well it was great to see the Fairview lorry  back, with Richard in charge, laying the last of the coping slabs on Platform 1C.

Well done to the team - Rod, Terry, Roger B, Peter H et al. Thank you - a real milestone in every sense of the word. 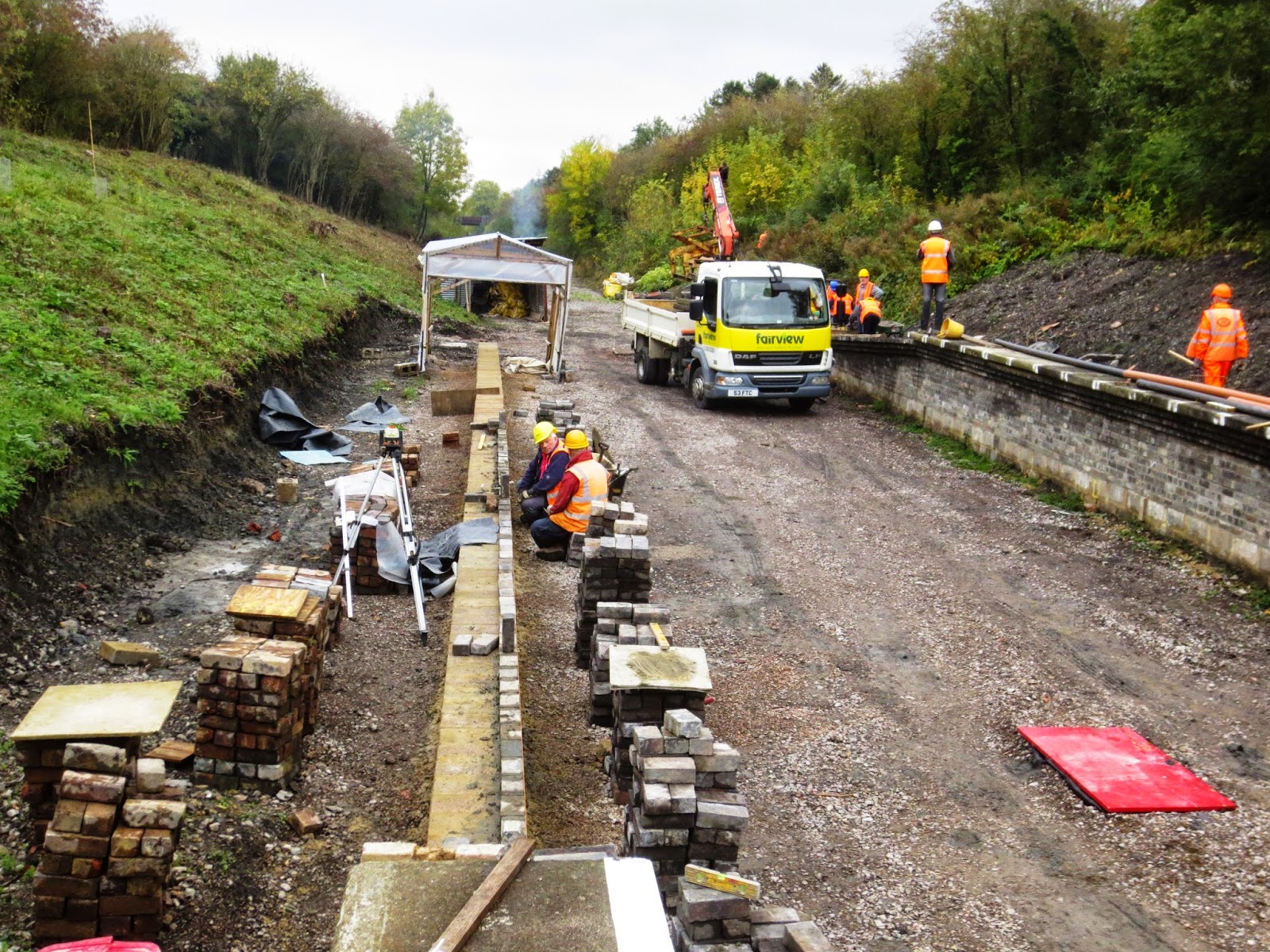 On the other side of the track bed the first proper bricks were being laid on  Platform 2C. Bob Jones  worked on the first course of stretchers with Clive  and Roger completing the intial set setting out. That first course of bricks always looks a bit lonely, but you will be able to monitor progress over the coming weeks. We have the shelter lined up, so we should have no wet weather excuses!.

Roger B was Duty Officer for the day and here is his report on the platform progress:-

The Team were progressing on two fronts today, brick laying on 2c and platform slab laying on 1c.
Clive, Bob Jones and I laid out the piers for the first course of blues, and 50 Blues were laid before the rain moved in.
On platform 1c the team of Terry, Rod, Peter H, Richard from Fairview and I laid 7.5 platform slabs on the slope to complete platform 1 Slabbing, a great result.
Thanks also goes to Steve who manfully cut the half slab in a cloud of dust.
Once again a great team effort on two fronts.

Prior to Richard  arriving to lay the slabs, the infill behind 1C needed topping up with some clean ballast to make it easier to walk on. Without JCB help, a team decided to do it the hard way -  yes shovel and barrow  with help from the dumper here and there!

There was a tremendous amount of hard work involved and when I walked along the infill later on  it was super smooth. It will allow the completion of the backing slabs - Oh joy I hear them cry....

On other fronts Peter T and  Ian H were  fabricating some new lamppost sockets for 1C. Good timing I think!


Work started on the clearance of the eastern embankment beyond 1C and where the old horse dock was. For those unfamilair with the horse dock, I know Jo will oblige a a short resume!
Posted by Bill at 19:55

The Horse Dock....
It was located to the north of platform 1 and was used specifically for horses, e.g. for the hunt at Broadway, and during WW1 horses were loaded here to go to the front.
There was also a cattle dock for cows and sheep for example. However, this was located in front of the goods shed on the other side of the road. So there were two different kinds of animal loading dock at Broadway.
As we have extended our rebuilt platforms northwards, a replacement horse dock would also have to move north.
Originally, there was a trailing point from the down line, leading to a shunting neck into which a loco with a horse box (or two) could run. It would then reverse over a facing point in the siding, up to a buffer stop a short distance away. The horses were then loaded from the side.
For us, the reinstatement of the horse dock would not only be authentic, but it would permit us to stable a carriage at Broadway for a variety of activities, giving a bit more life to the extended north end.
At the moment it's just an idea. It's what we brainstorm about when it's raining and we sit in the cabin with our cups of tea. But it would be part of recreating Broadway as it was.

Bill
I'm a bit concerned that progress on the signal box seems to have slowed - the webcam now shows the door frame to have been removed. Is there a problem?

The signal box looks to have ground to a halt over the past few weeks, do you think there will be much more progress possible over the next few winter months?

You have rightly observed that no visible progress has been made in the past few weeks, to my absolute frustration. If I explained why, frankly it wouldn't sound credible.
Nevertheless work will restart next week and some real progress will be made.
Bill

The last reference to the signal box also refered to a Health and Safety meeting. Experience tells me that's not a good omen.

In the realms of credible stories, H&S usually has an absence of credibility

The Victorians and Edwardians built railways in a much more gung-ho fashion, and it never did them any harm