There were 20 volunteers on site. There  were three main tasks that were planned for the day. Best laid plans of course often come unstuck. The late arrival of the JCB and excavator for digging out the footings of 2C slowed things a little at the start of the day, which left some keen volunteers spinning their wheels and forced to drink tea! 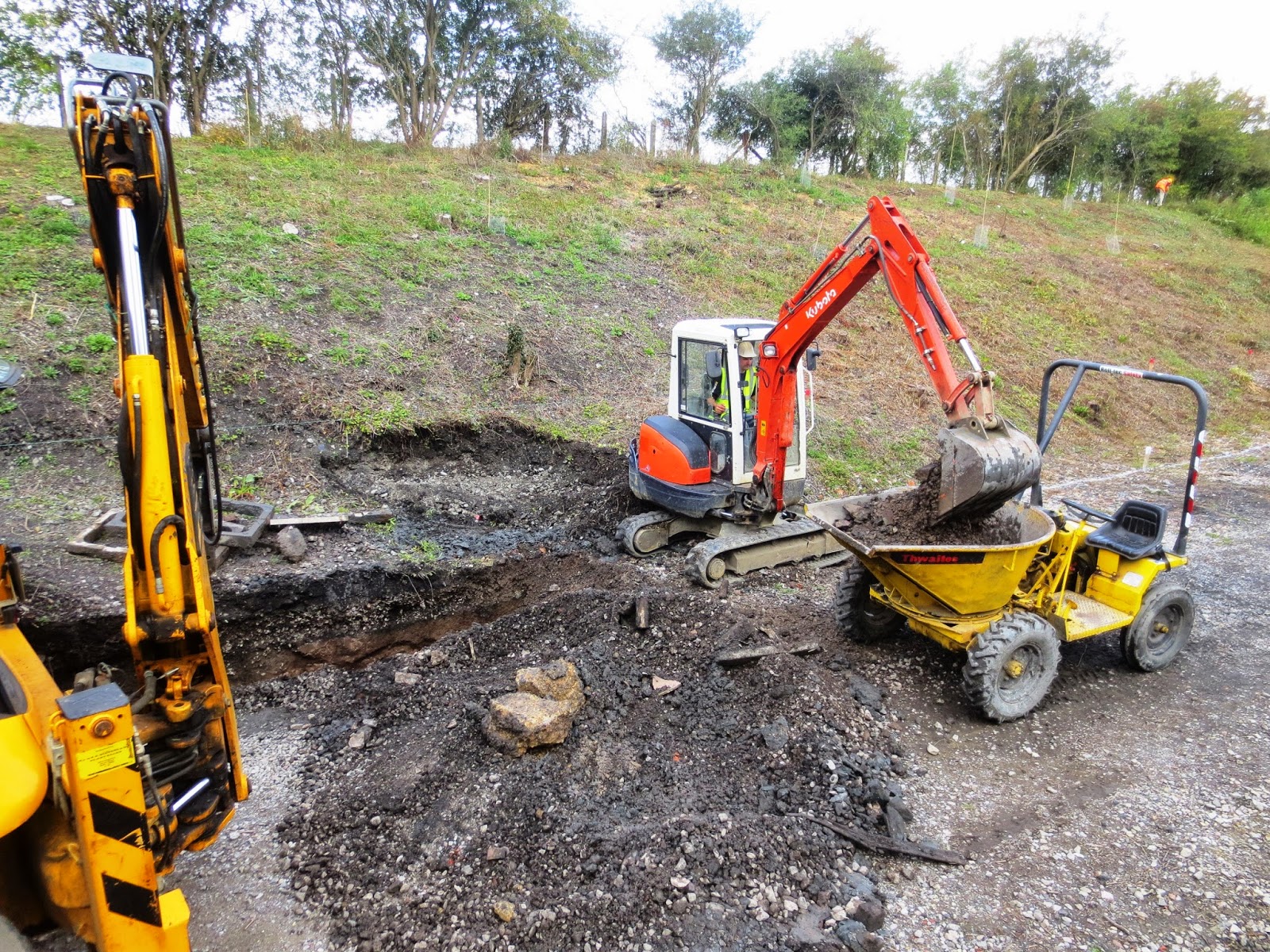 However the equipment arrived by 10am, an  essential repair having been completed on the hydraulics of the JCB. The digging out required the deployment of both machines, The excavator to pull the trench, and the JCB ,with its pecker attachment to "halve" the side drain pipe which was unfortunately running along 50% of the line of the  the dig. 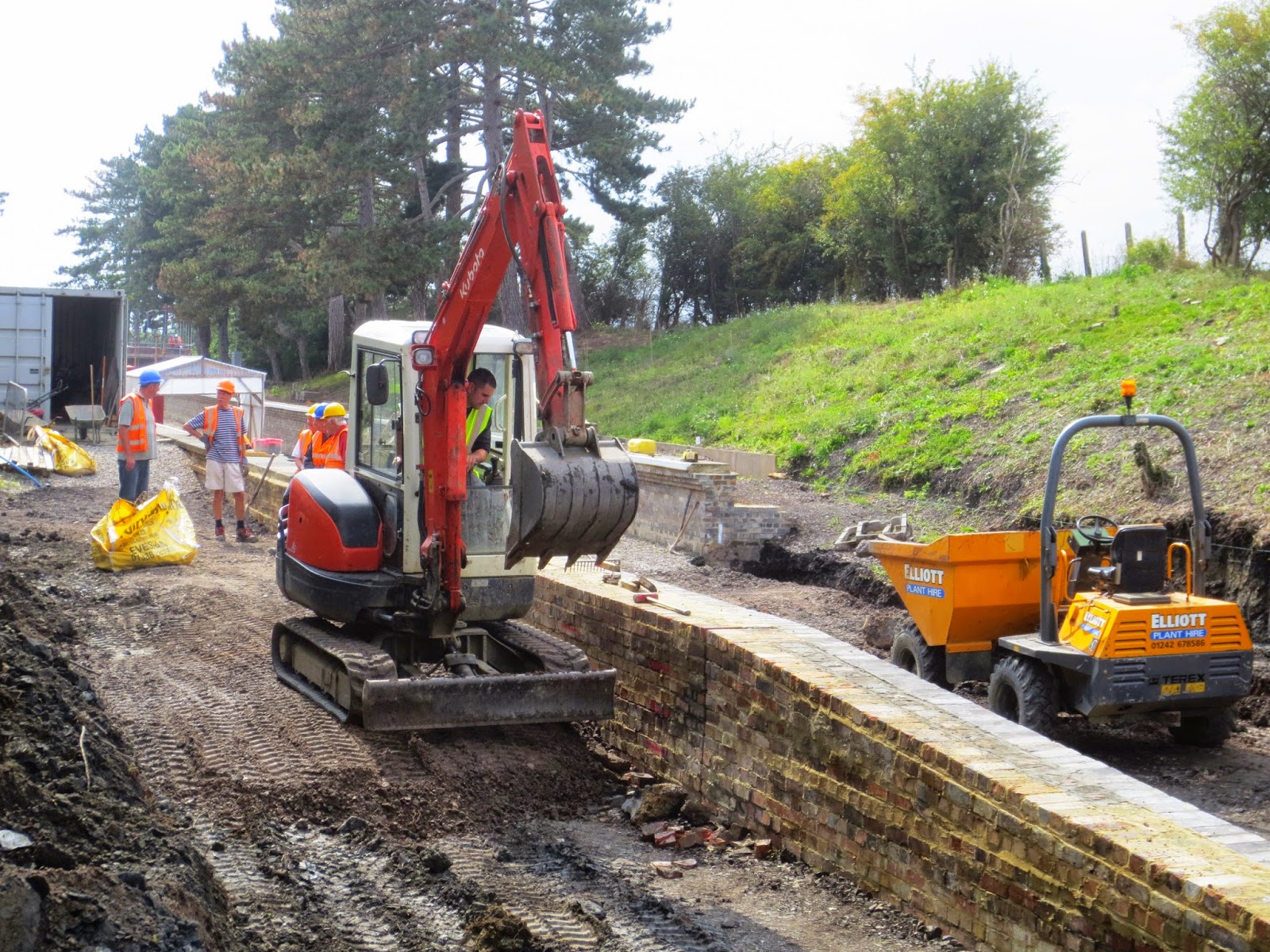 However the type of spoil coming out which had quite a bit of stone in it, was ideal for going in behind the massive void behind 1C. 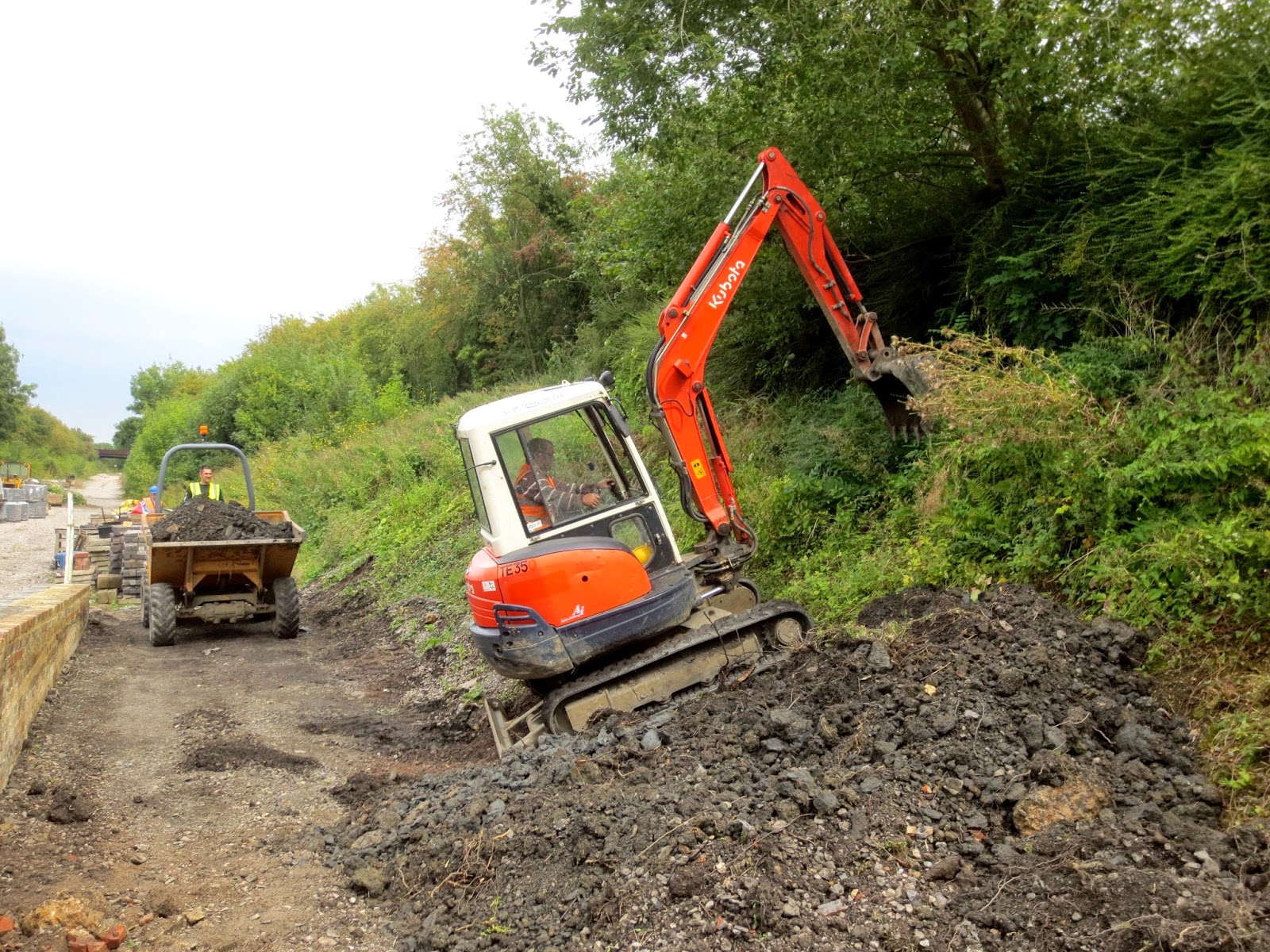 The unsuitable stuff ended up on the rear embankment for profiling later. The job continues tomorrow with the good offices of Roger B and Jo in attendance. The trench will be finished in the morning and concrete pouring will start in the afternoon.

Work was continuing on the Signal Box.  Bob W, Tony and Paul persevered all day.  Bob summed up the day - "Today was a day of consolidation and preparation to enable progress on the signal box to continue.  Regarding the brickwork a course of stretchers was laid on the back wall and the fourth corner was brought up to cill height with support from Tony and Paul.  Peter Q has constructed a dummy frame for the south west corner window opening The position of the doorway has now been agreed and delivery of the frame and threshold is awaited.  Ron Brislin came to site today to discuss the proposed fireplace and has offered to provide the fireback and archbar from a stock at Winchcombe.  We also had a visit from Mark Young who was happy with the proposed revisions to the joists"
Thanks Bob....... 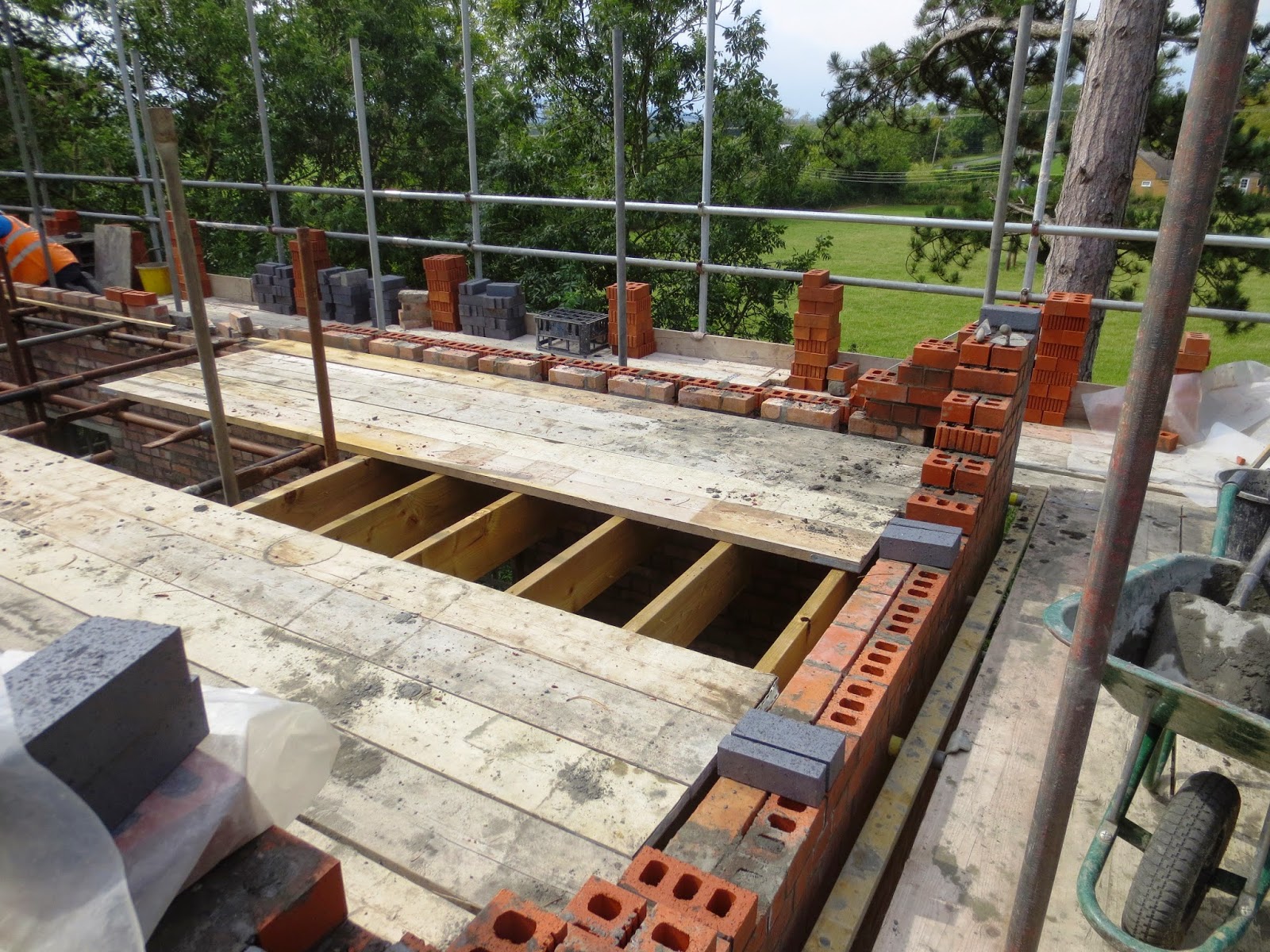 The planned installation of the lower section of the lever frame was rained off on Tuesday, but will be carried out next Tuesday, weather permitting.


At the southern end of the site Fairview Richard and the slab laying gang were laying 3 slabs on either end of 1A and 2A. A great job was done, but no photographic evidence - Jo was driving the dumper and I was in meetings.  A poor excuse on my part - I need to get my photographic instinct in gear.... Nevertheless, this work will allow us to start planning the barrow crossing route, and is a great step forward. 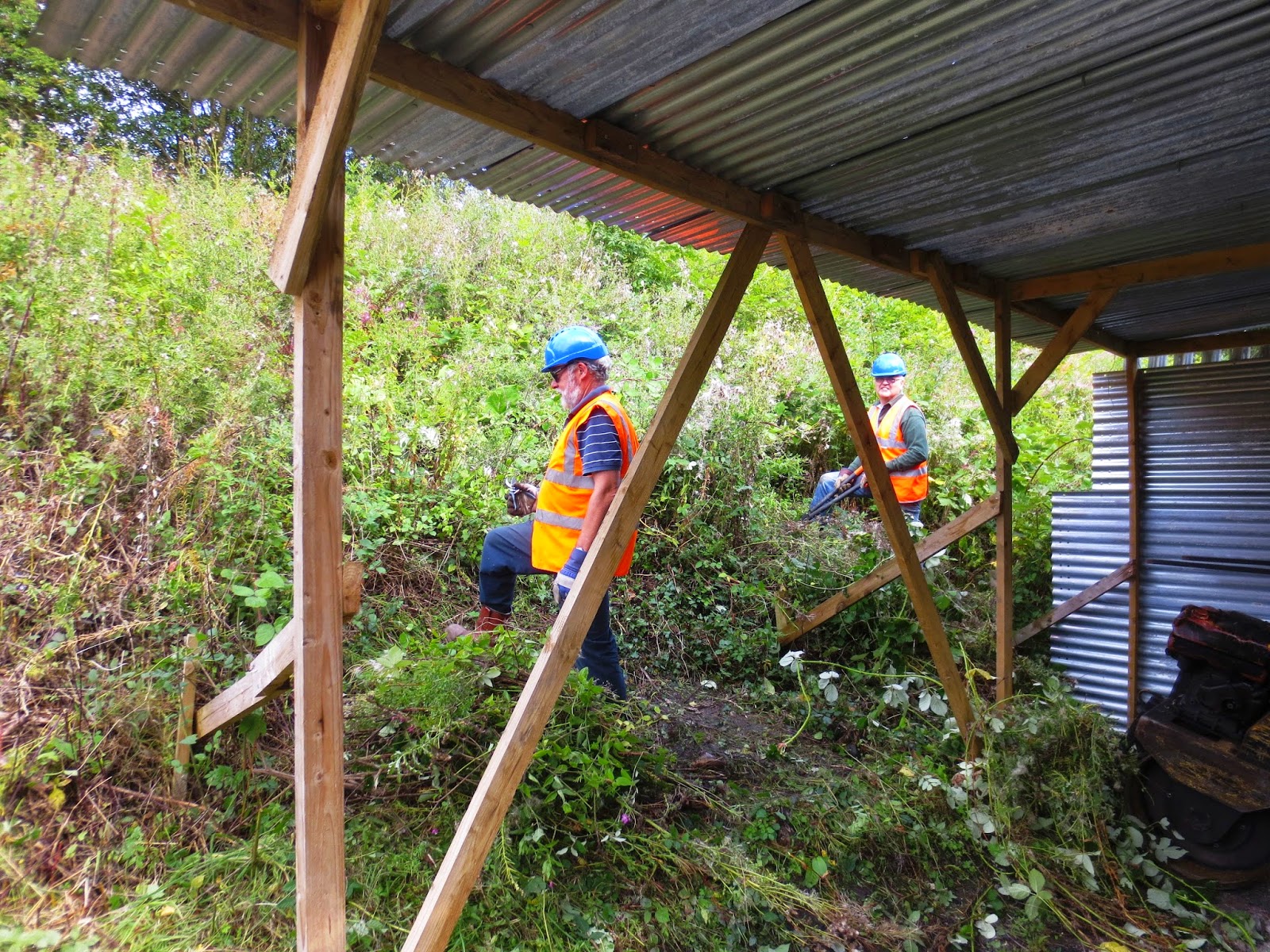 Work continued on the embankment clearance and the general cutting back of vegetation. Rod and Terry spent their time on clearance in the car park and new recruit John and  Chris H cleared the embankment behind 2C


In the afternoon  Rod and Terry shifted 100 concrete blocks with the dumper from the northern end of the site and stacked them in front of 1C, ready for use on 2C. A great (eye watering) effort!

Jo will follow up with a report on Thursdays progress....
Posted by Bill at 21:12