The platform 2c foundations have gone in ! A small group of 4 - Steve, Adam, Roger and your (temporary) scribe came bright and early on this sunny day to complete the excavation of the final 30m of 2c this morning.

First of all, a picture we missed yesterday - a view of the final part of the southern end of the platforms, which had 5 slabs placed on them each. Just to the left, out of sight, is the new bracket signal.

Having excavated approximately two thirds of the foundation trench for 2c yesterday, the digger team returned early this morning to finish the job.

The trench will allow 2c to be extended level with the end of 1c. This involves a further 20m of platform, and a ramp of 10m. The platforms are of a length to accommodate a 10 coach train, so are almost double the length of the original platforms, which typically accommodated a one, or perhaps two coach train. As the new foundations cut across the original side drains, the latter had to be stripped out and will now be replaced by a new centre drain, the same as in between the original platforms lengths. We will be laying this drain shortly as well. In fact, to show that we mean business, the drain pipes themselves have already been ordered and arrived today:

It was a stroke of luck that we were digging today, as the JCB was able to unload the delivery and place it close to the area where the pipes will be used.

Ready for the beginning of the new platform wall, about 100 blocks were positioned yesterday. A lot of hard work went into this - it takes two men to lift them in and back out of the dumper. 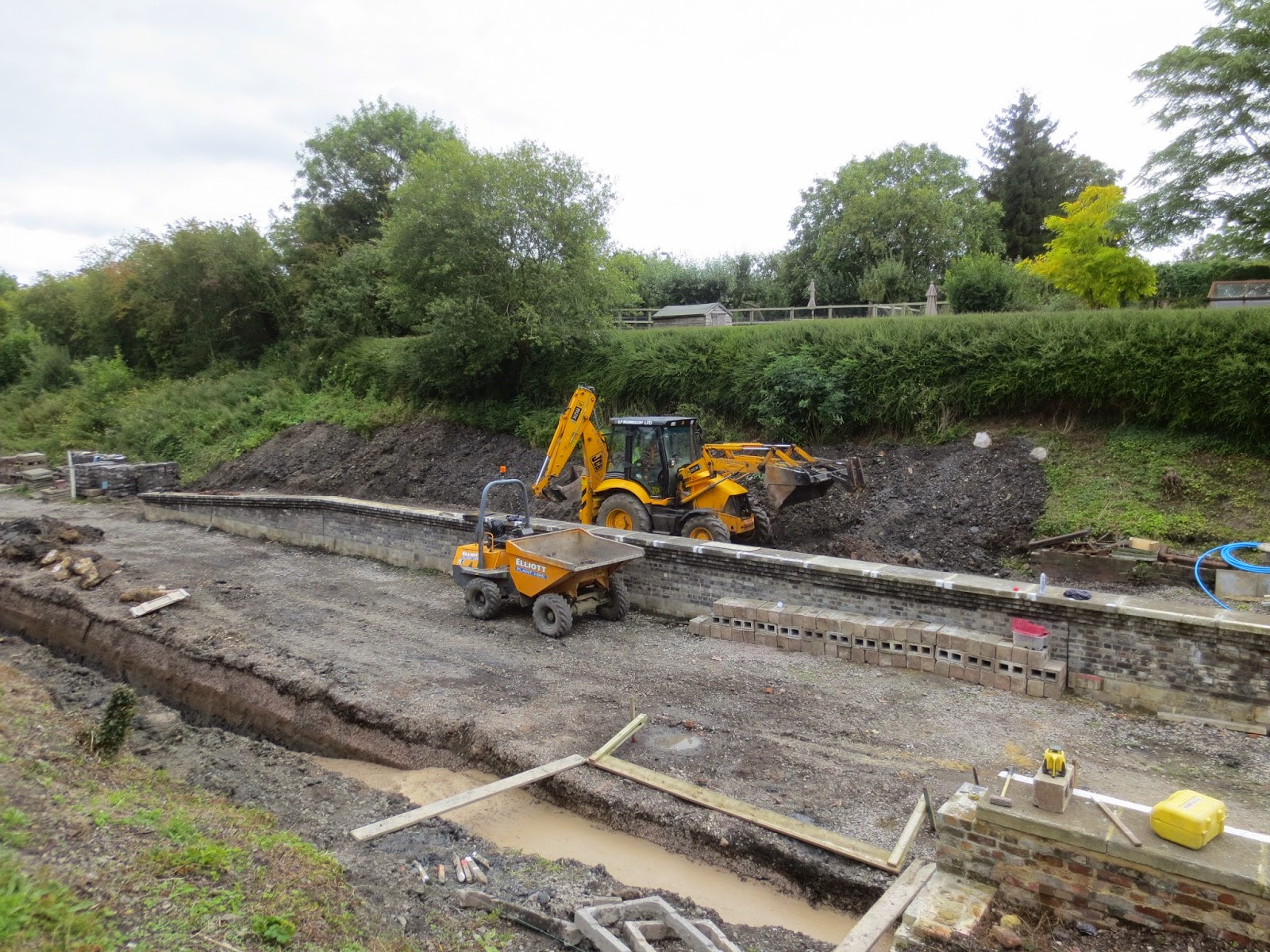 Yesterday, we had a good rhythm of work going. The JCB would dig the trench and fill the hired in 5 ton dumper. The fill was alternated between good spent ballast from the trench, and clay and/or topsoil from the embankment excavation. The dumper then brought it behind 1c, where it was placed near the wall if ballast, and up against the embankment if clay/topsoil. The mini digger then rolled in the ballast, and graded the slope up the bank. It looked very professional by the end of the day.

Unfortunately the big dumper suffered a puncture around lunch time, and the MO was changed to the mini digger excavating the last few yards of trench, and the JCB bringing in the spoil and tucking it in behind the 1c wall, as you can see in the picture above. In the foreground you can see the first load of concrete poured, and tamped down. We don't hang about here, you know. 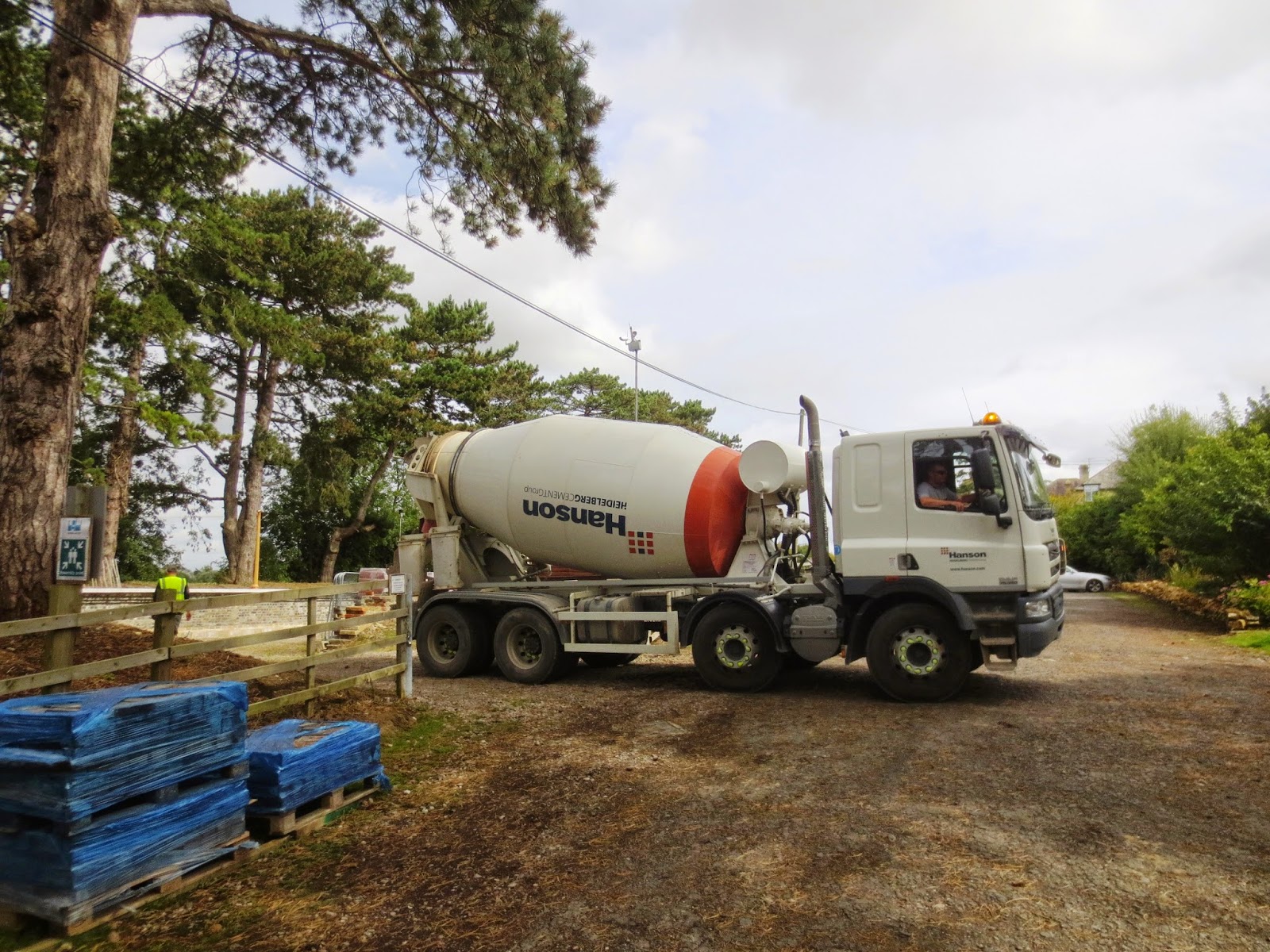 The first load of concrete was ordered for lunch time, but surprised us by arriving at 11.30, when we were still digging.... it's the first time we have seen a trench being dug at one end, and being filled at the same time with concrete at the other!

The Hansons lorry rather dwarfed the site, but made it down the track bed in fine style, carefully avoiding all the centre drain catch pits.

It's surprising how much concrete the foundations can swallow, but you can rest assured, they will be strong. The first load made no impression at all, but as the lorry was leaving the second was already waiting and another load went in very quickly. Encouraged by the driver's indication that sales were a bit slack that day, we ordered another 4 loads by telephone. We were standing by the cabin wondering where they were, when we saw the third lorry come down the Evesham road.... isn't there a 'bridge closed' sign up there?


In this last picture, you can see what an excellent job Adam in the mini digger made of the 1c slope on the right. The level has also been raised by a foot and is now correct for the installation of the rear slabs, lamp posts and associated conduits. This is also the site for the future Broadway side running in board, for which the posts and finials are on order.

Impressed by the large slope of topsoil, your scribe rushed off to Cotswolds Building Supplies to buy a very large sack of grass seed. We'd like to grass the area, before the weeds have a chance to get a toe hold, so any help with raking this in on Saturday would be much appreciated.

Although we didn't see the final loads of concrete arrive, they were ordered and confirmed, so by the time you read this, the 2c foundations should be in !