As planned, we swapped a day at CRC2 for another push on the signal box at Broadway this Monday. It was very blustery and almost cold - the end of the summer in sight? 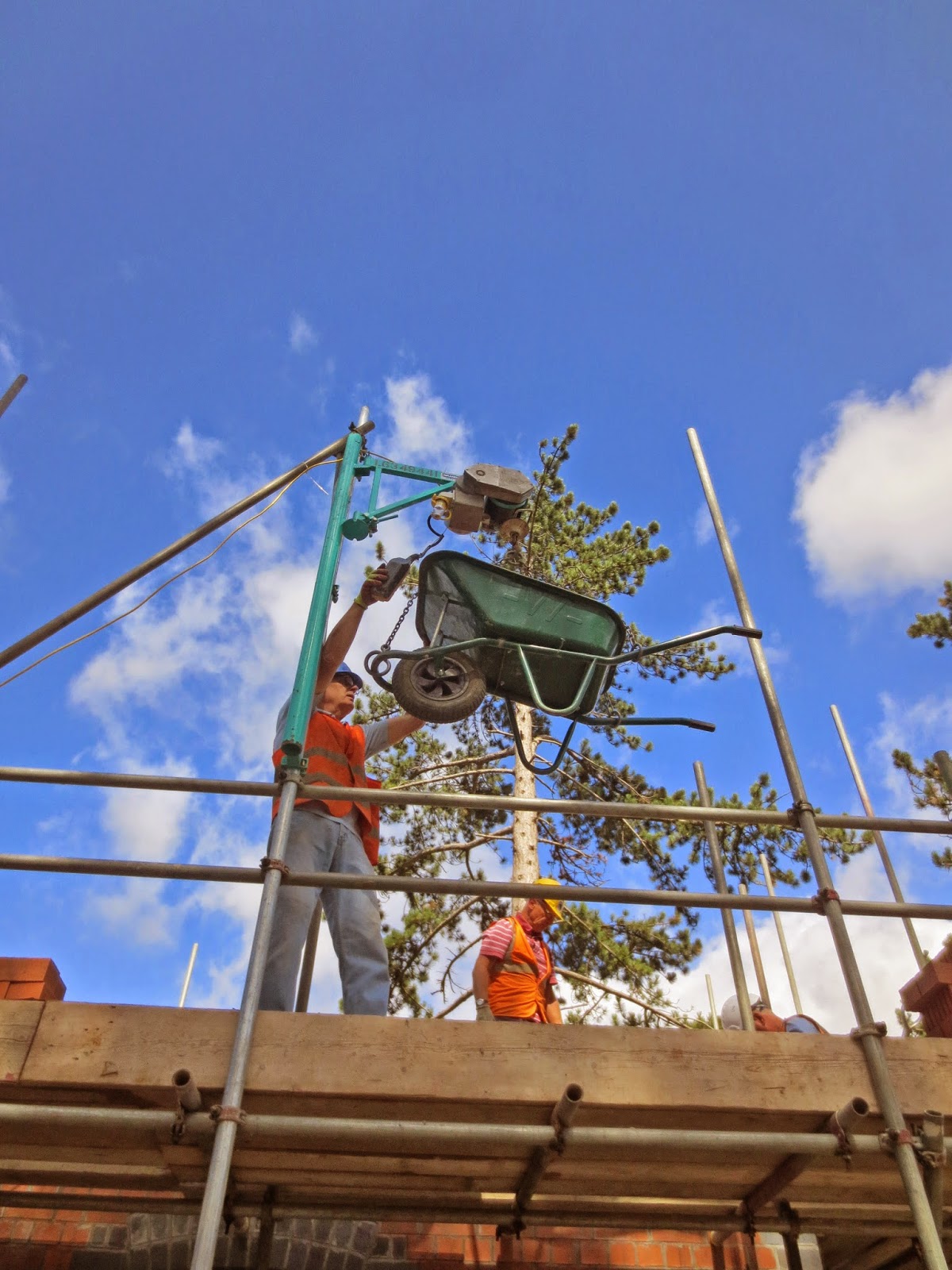 For brick laying, the weather was excellent, the mortar went off in seconds with this wind. We were expecting heavy rain in the afternoon, so 4 of us threw ourselves at the task, with two laying, and two in support. The first thing to do is to make a barrow of black mortar. When the scaffolding was lower, we would push this to the foot of the ladder, shovel some into a bucket, then climb the ladder with it. We had hardly climbed back down again, when there would be a cry of ' more mortar' or ' muck wanted over here' and back up the ladder we would go with another heavy bucket.
But no more - 10 days ago we obtained the use of this whizz hoist. You loop 3 chains over the handles and the front of the barrow, and then from the top press a button and up the whole thing goes! Fantastic. In the picture you can see John receiving the first load of the day. You drop it down on to the scaffolding, and then, instead of hoiking a heavy bucket around, you can wheel the whole load round the planking to the right address. It's quite big up there, now that the floor is covered. 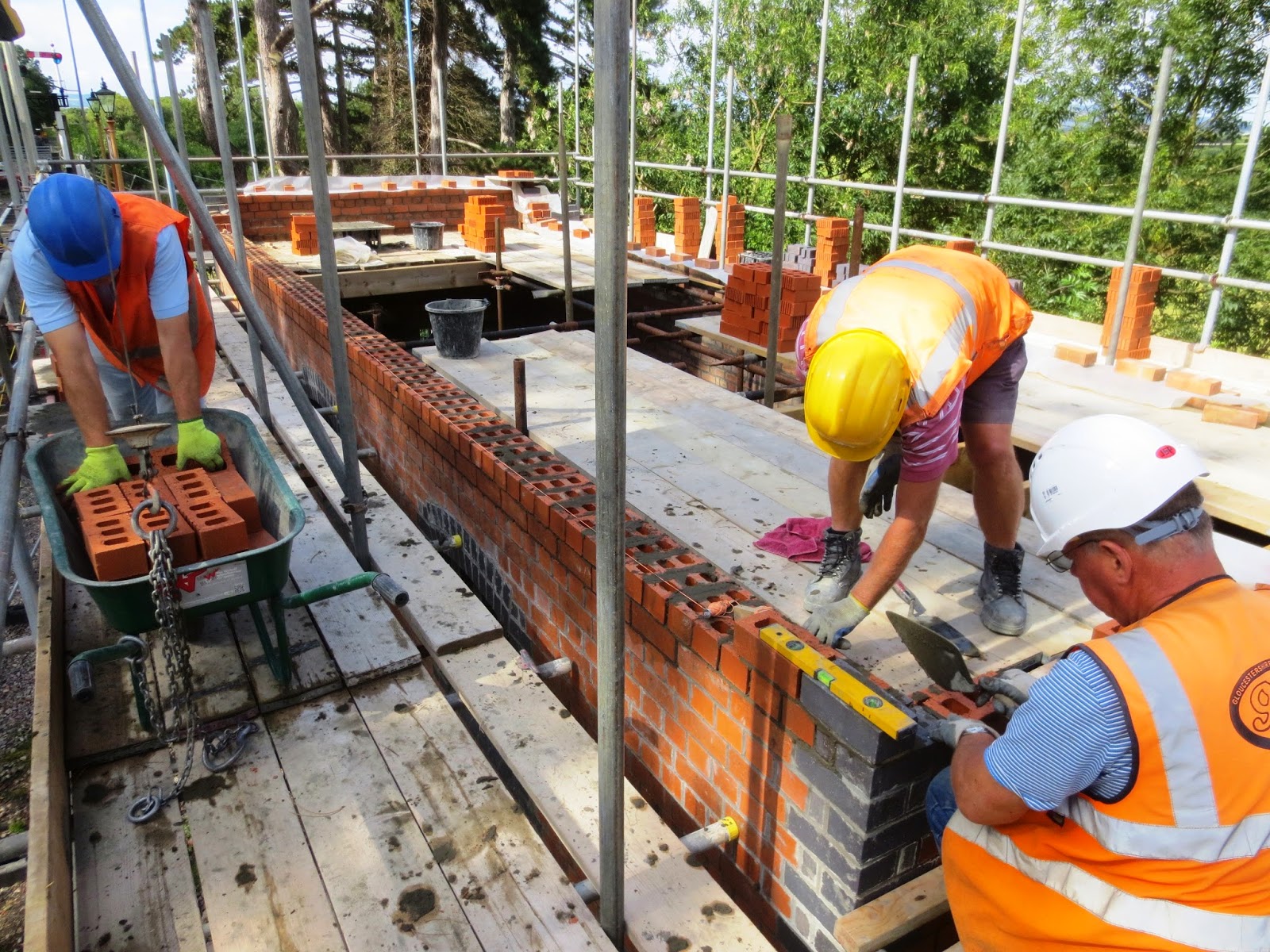 After the lads have been supplied with an initial supply of mortar, the back up team can concentrate on the brick supply chain. Here you can see John unloading some 'weathered reds' which are put in little stacks all along the line of bricks to be laid. One brick layer (Bob) does the outside skin, while the second (Tony) does the inside. You can see both of them at work, nearing the NE corner. Only recently we were at the level of the floor, and now the walls are starting to rise further still and the shape of the lever room is beginning to appear. The actual frame itself will poke out through the gap in the middle, and take up about half the length of the box.

As we worked high up on the box, Clive made himself useful around the site, and eventually arrived with 50Kg of cement in a wheelbarrow, brought up all the way from the other end of the site. It's one of those things that we keep the cement at one end of the site, while some of us use it at the other. Shortly after that, Clive arrived with a second load, to grateful appreciation from the support gang. 100Kg of cement will keep us going for a little while.

And what did we achieve today? Well, as the weather was (mostly) dry, we had a good one. We put one layer on the southern wall, leaving only one more layer to go here, before it is time to put in the big sliding windows. Along the front, a much longer wall, we managed to put up three layers, which were pointed up and rubbed as well. You can see Tony coming to the end of his inside row, while Bob is working on the corner with the level. 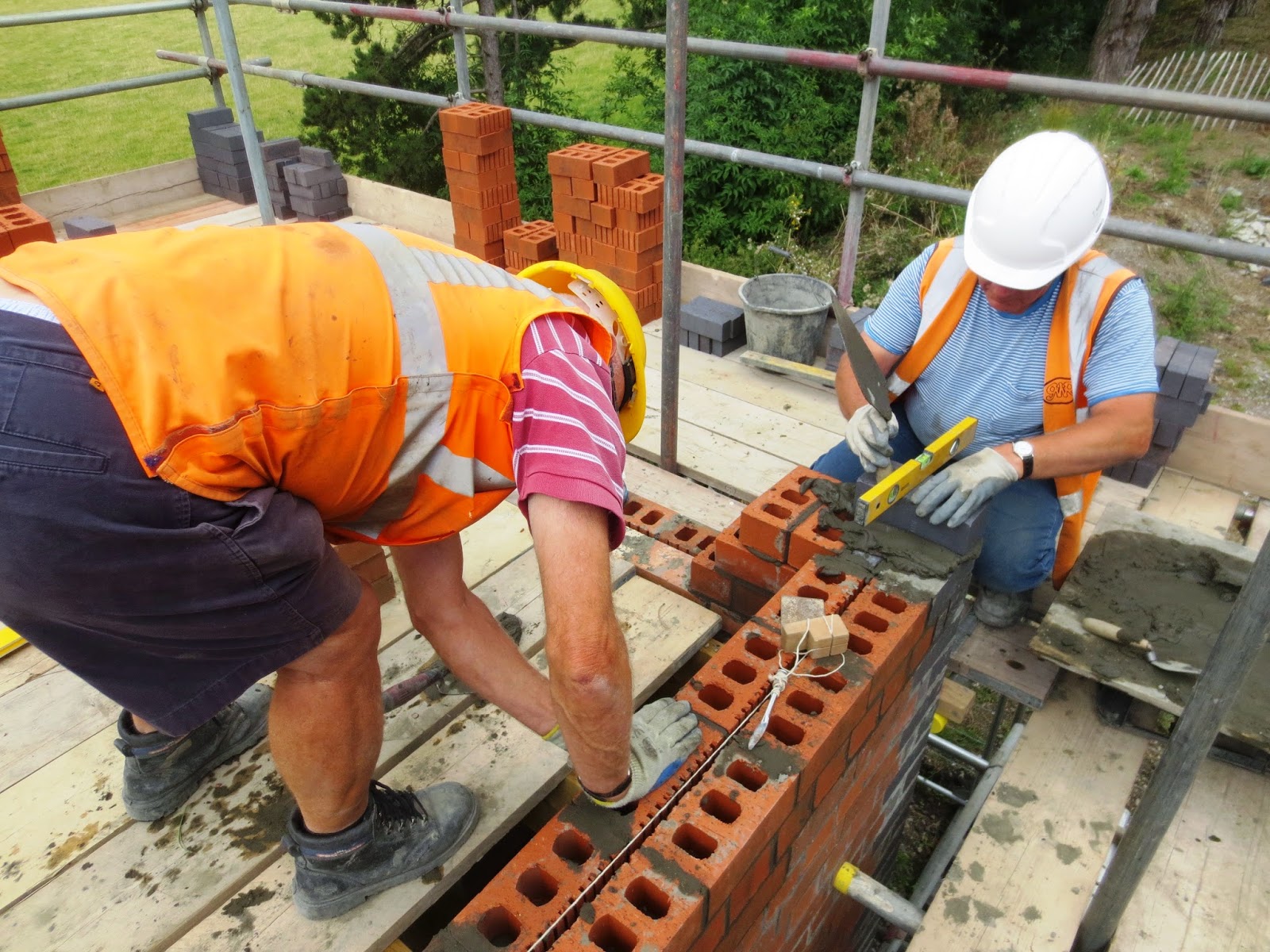 Having completed today's outside rows, Bob can be seen building up a tower on the NE corner. This is then the jumping off point for the next row on either of the adjoining walls. He got the tower up, which was perfectly on schedule for the day, so he would have been happy with that. As we were starting to tidy up, the heavens broke - boy, did it rain ! Luckily the work had been covered up, so it is safe. There were even a couple of claps of thunder.

Just before the rain came down, I took this photograph of the whole box as it looked around lunch time. It's not a webcam shot, but I hope it is sufficient for those that need their 'daily dose'. 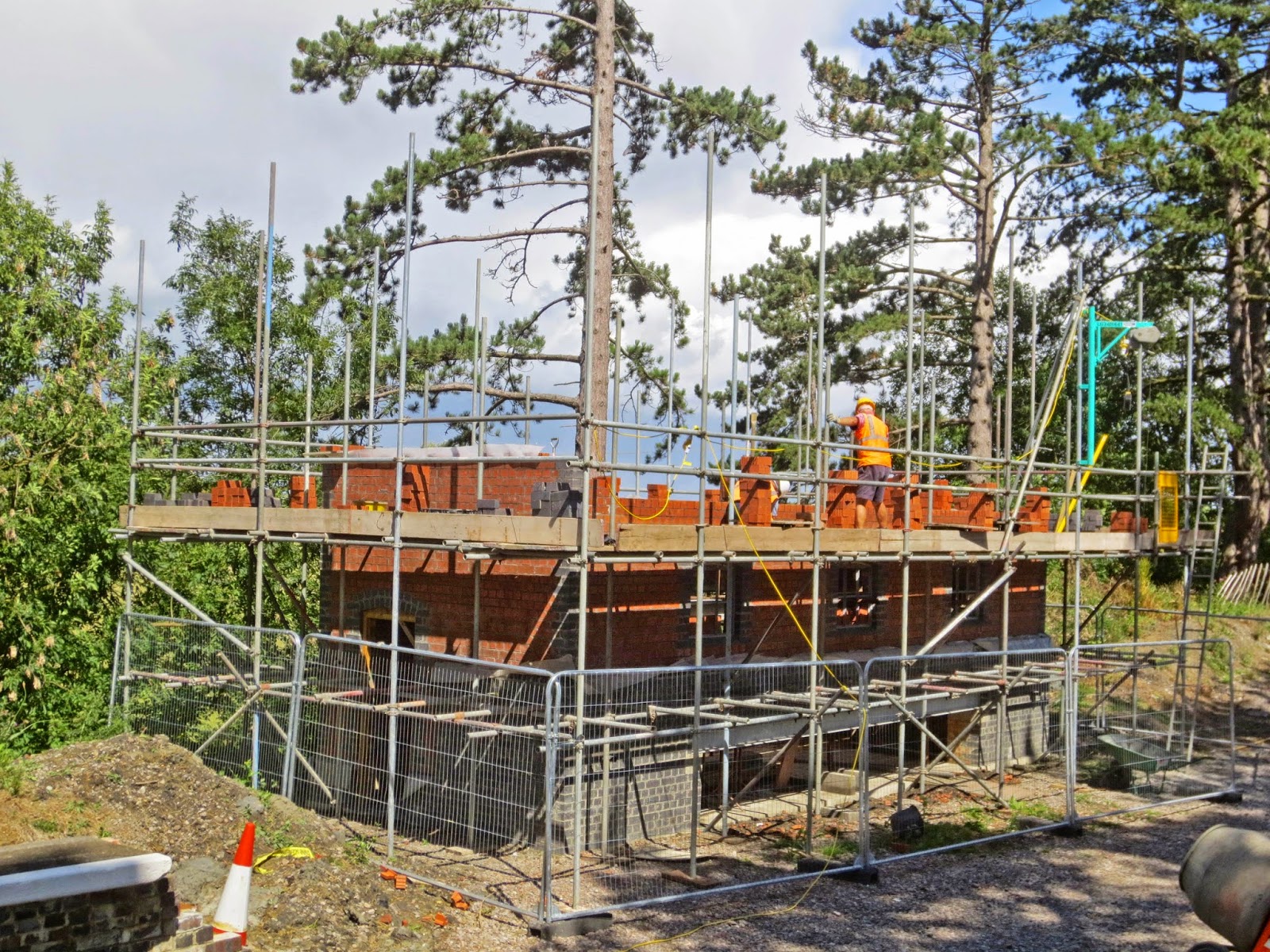 You can see that the brickwork is just starting to rise above the new level of scaffolding, with the southern gable higher than the rest. Now where is that big name board with BROADWAY SIGNAL BOX ?

We will be back on Wednesday to continue the good work.

What ever happened to the good old 'hod carrier' ?? A good labourer would keep three brickies supplied with muck and bricks/blocks.
Andy

The hod carrier became much older and wiser like the volunteers hence the hoist.