Another glorious Saturday - what a great summer we are having - and a goodly crew at work today. Here they are, job by job: 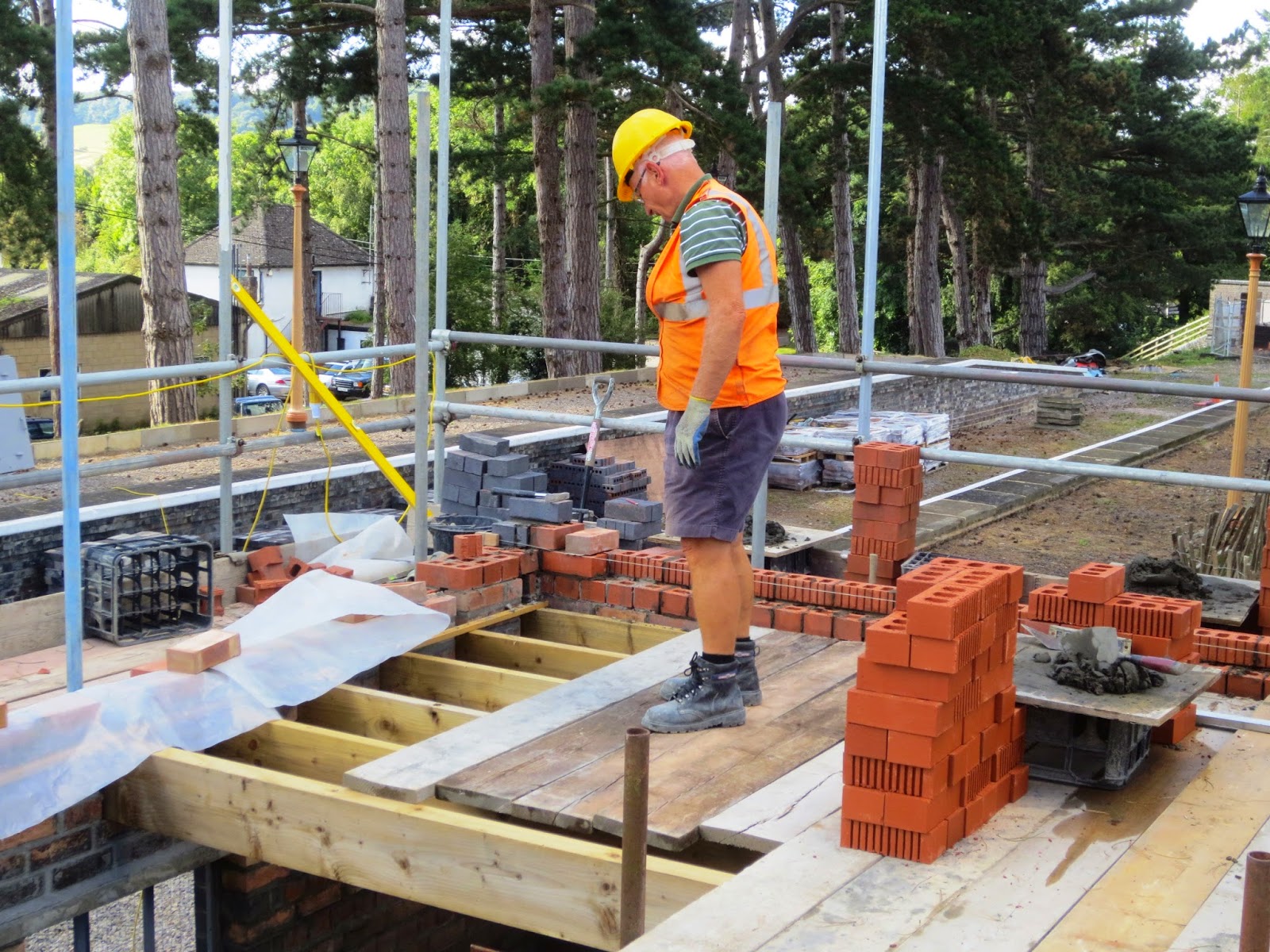 One team consisting of Tony, John and Bob set to work on the signal box and in the picture above you can see Tony sizing up the job in hand. We have put in the floor joists at either end of the future lever frame, with some scaffolding to fill in the remaining gaps, the lever frame being programmed for a later date. This meant filling the gaps with short scaffolding boards. Tony has just run out - what to do next? He managed it somehow, we do want a safe working platform, with no holes, please. 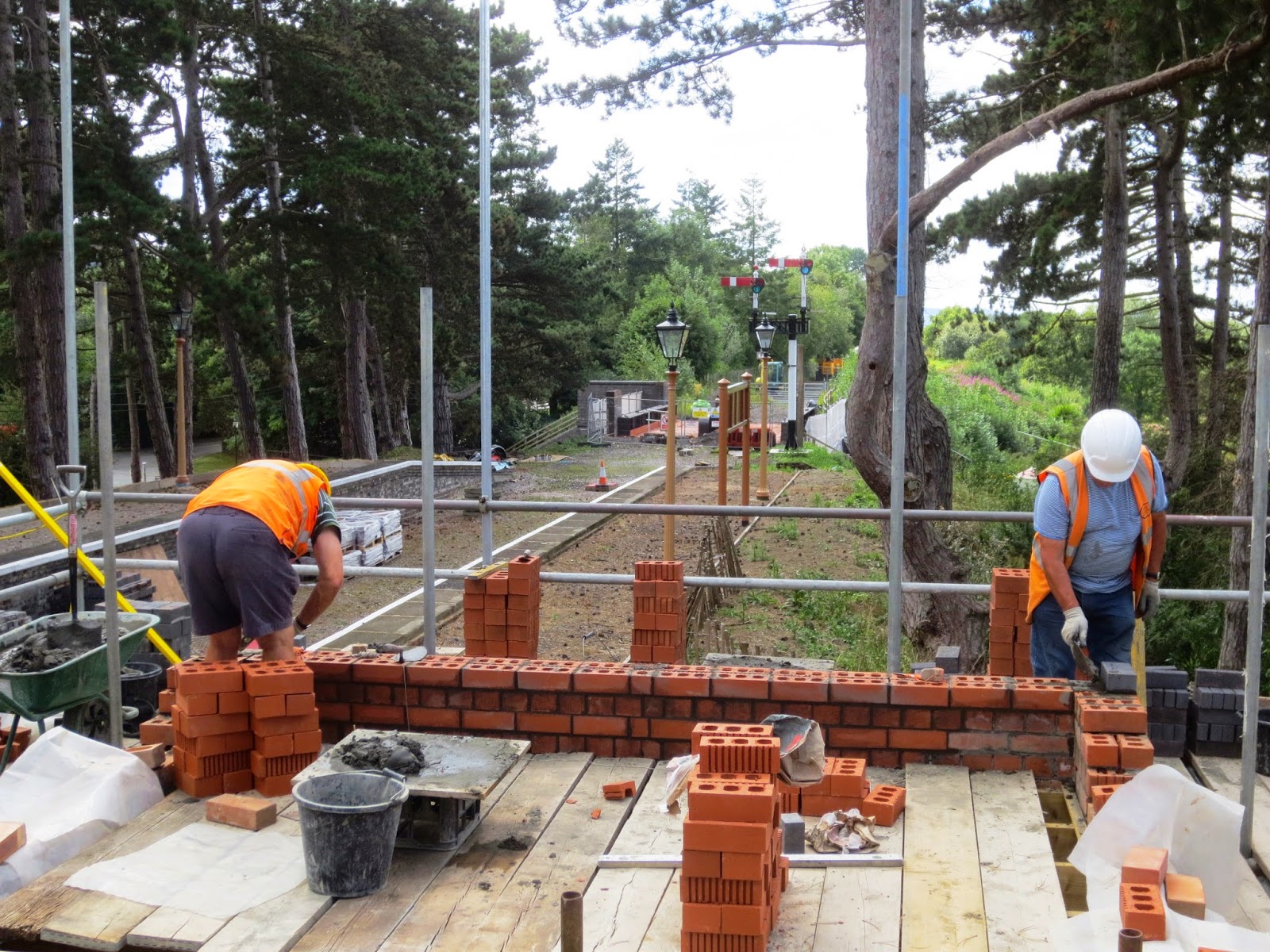 Here we see Tony and Bob at work laying bricks - we like to see that! Bob was on the outside, while Tony backed him up on the inside. From this level onwards, we are inside the operating room of the box itself, so we want nice smooth walls. Behind them you can see several towering stacks of new bricks - these were ferried up wards by John and your (temporary) scribe. We now have a super whizz hoist, but the first time we used it the lights went out - actually, it was the mixer that stopped working - and after some head scratching, we realised the transformer (115v) wasn't man enough for the job. Bring out Big Bertha! Now we can mix and hoist at the same time.
The result at the close of play was 5 rows of reds, backed up, on the southern gable end. Pretty good, we reckon. It's the dry weather that makes such rapid progress possible. Bob also got a corner tower in on the NW end, and this will enable us to run several courses (we hope) down the back on Monday. Yes, we are coming back on Monday. This is essentially the CRC2 Monday gang, and due to various critical holidays CRC2 is taking a rest, allowing us to devote this Monday to the box, if the storm allows. 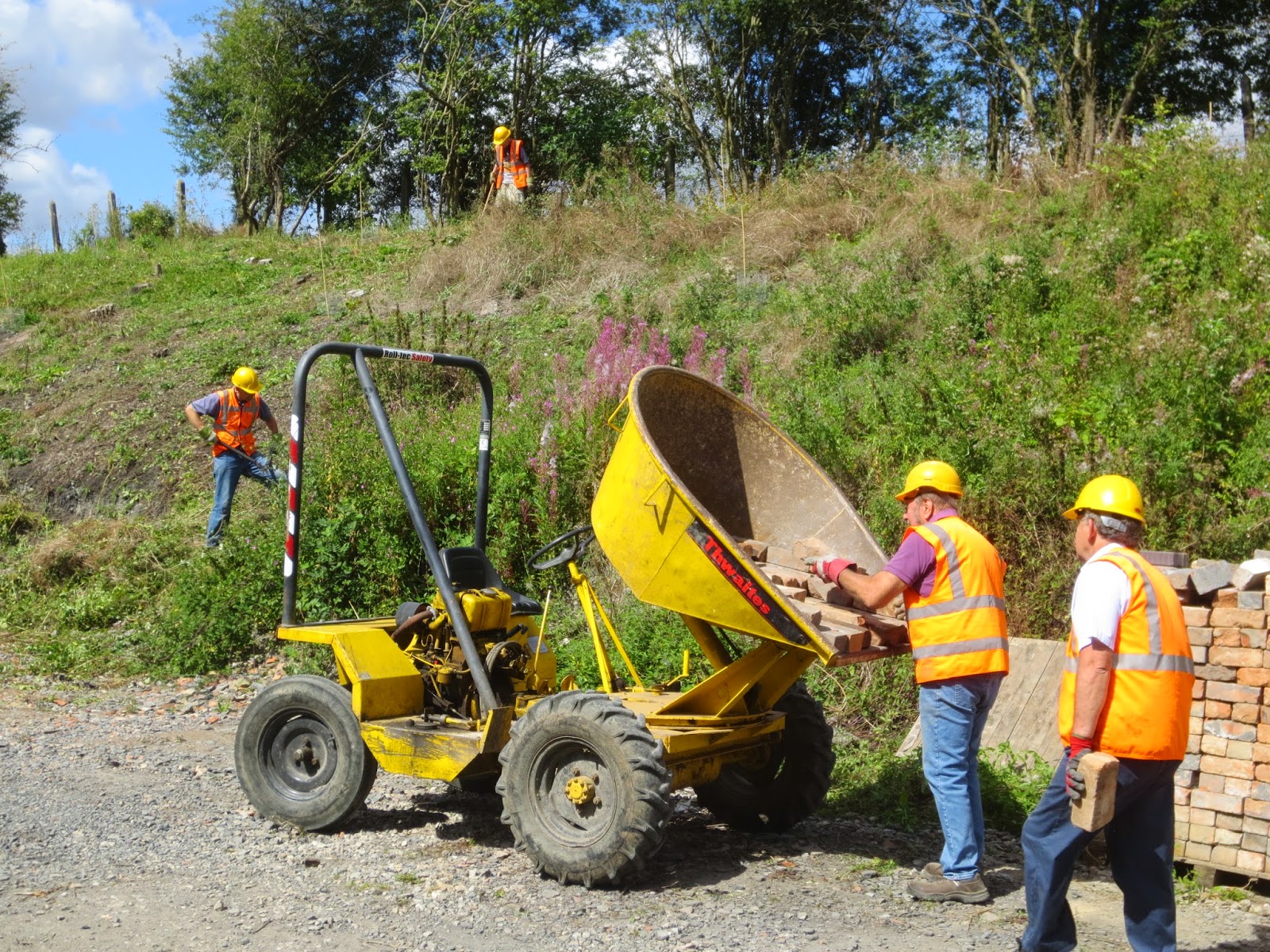 At the other end of the site, a big push is on to clear the cleaned bricks stacked along the future foundations of 2C. When we put them there, we didn't realise that the platform was going to be longer still. So that is several 000s of bricks that need loading into the dumper and driving up the track bed a bit for unloading again, and stacking on a number of cunningly positioned pallets. So far, we have stacked 10 pallets worth, in 2 working days. There came a point in the afternoon where we all thought, right, that's it, no more, I'm beat. We retired to the cabin for a cup of tea. Cue arrival of the chairman.... Dang !

In the background we can see Vic and Dave clearing the cutting side, so that we can get a better view of 2C when the time comes to set it out. This exercise generated large rolls of undergrowth. 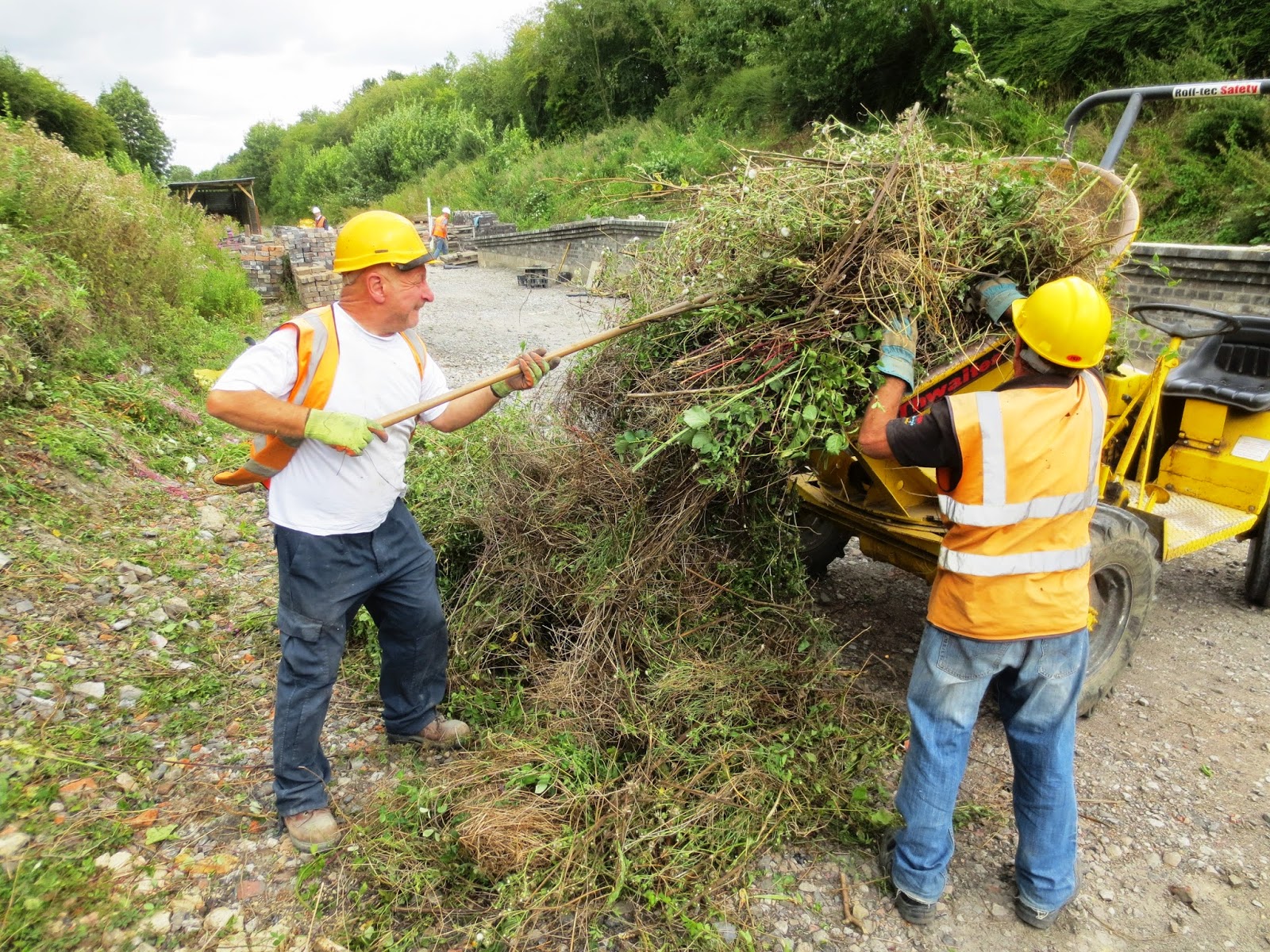 Here we can see Clive and Steve wrestling a large roll of greenery into the waiting dumper.

This greenery job was a change for Clive, who usually prefers bricks for company: 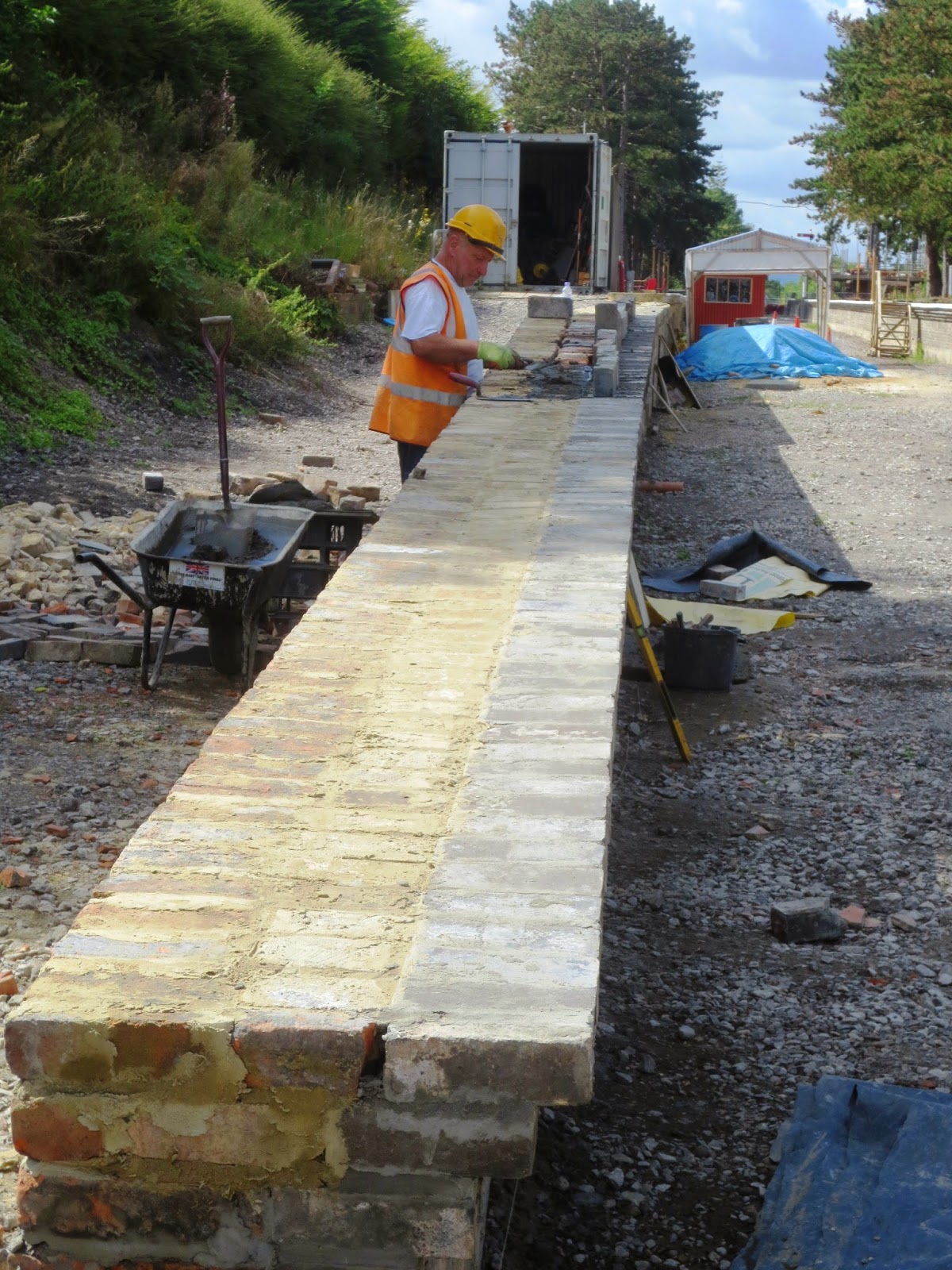 Hasn't he made a brilliant job of the 1C ramp! He finished off the corbelling today, and we see him here infilling some left over mortar into the last holes in the recently back filled reds. Lovely and smooth. Now to add the slabs. These are quite tricky to lay. Did you know the whole station lies in a gentle curve? So every slab has to be laid at a slight angle to the previous one. 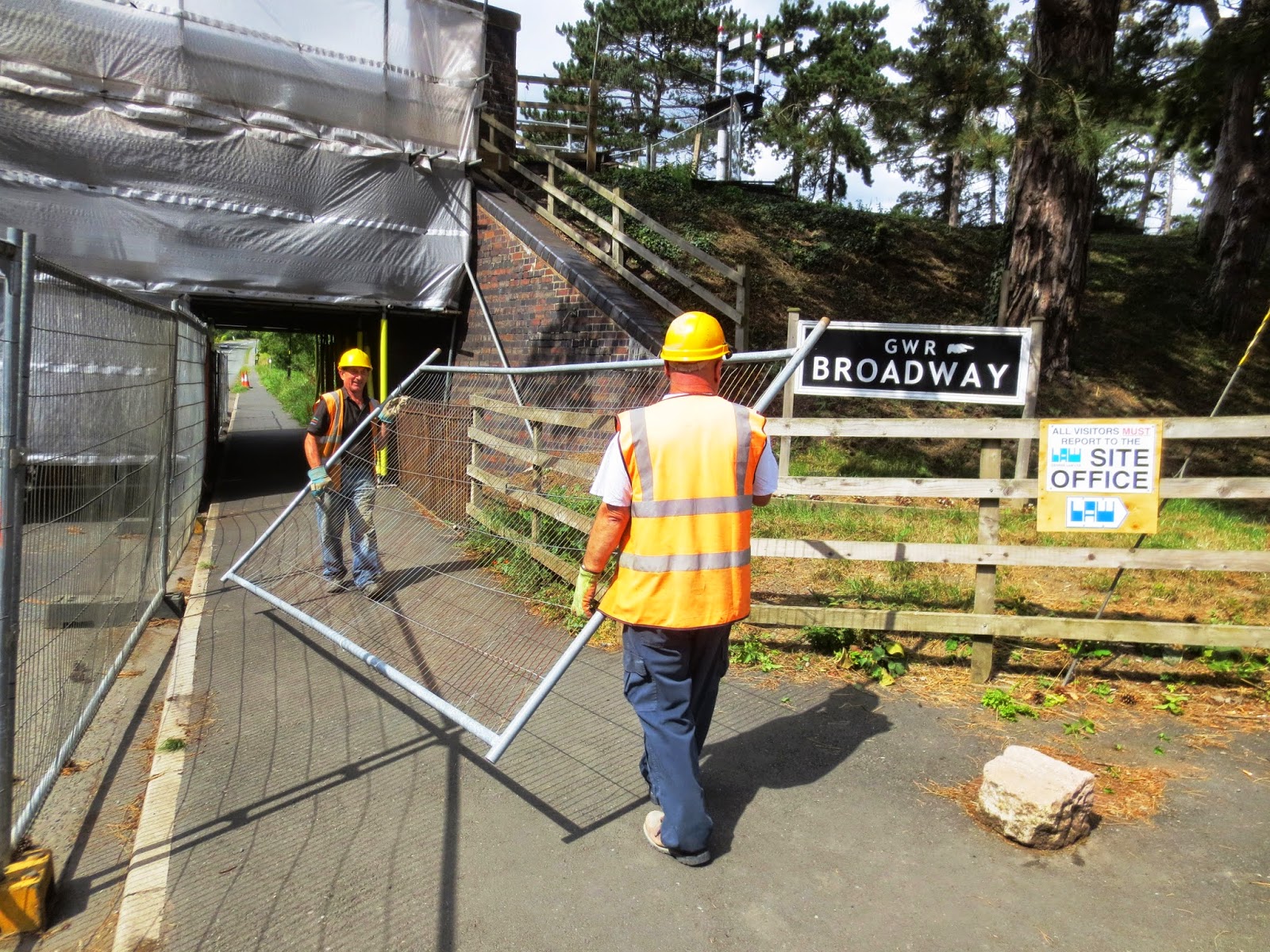 As an in betweenie, Clive, Steve, John and Jim went down to the Childswickham Road bridge and recovered some Heras fencing panels. What a long walk that was. Here they are on the home stretch, having wriggled a panel through the mousehole under the bridge. It just made it. 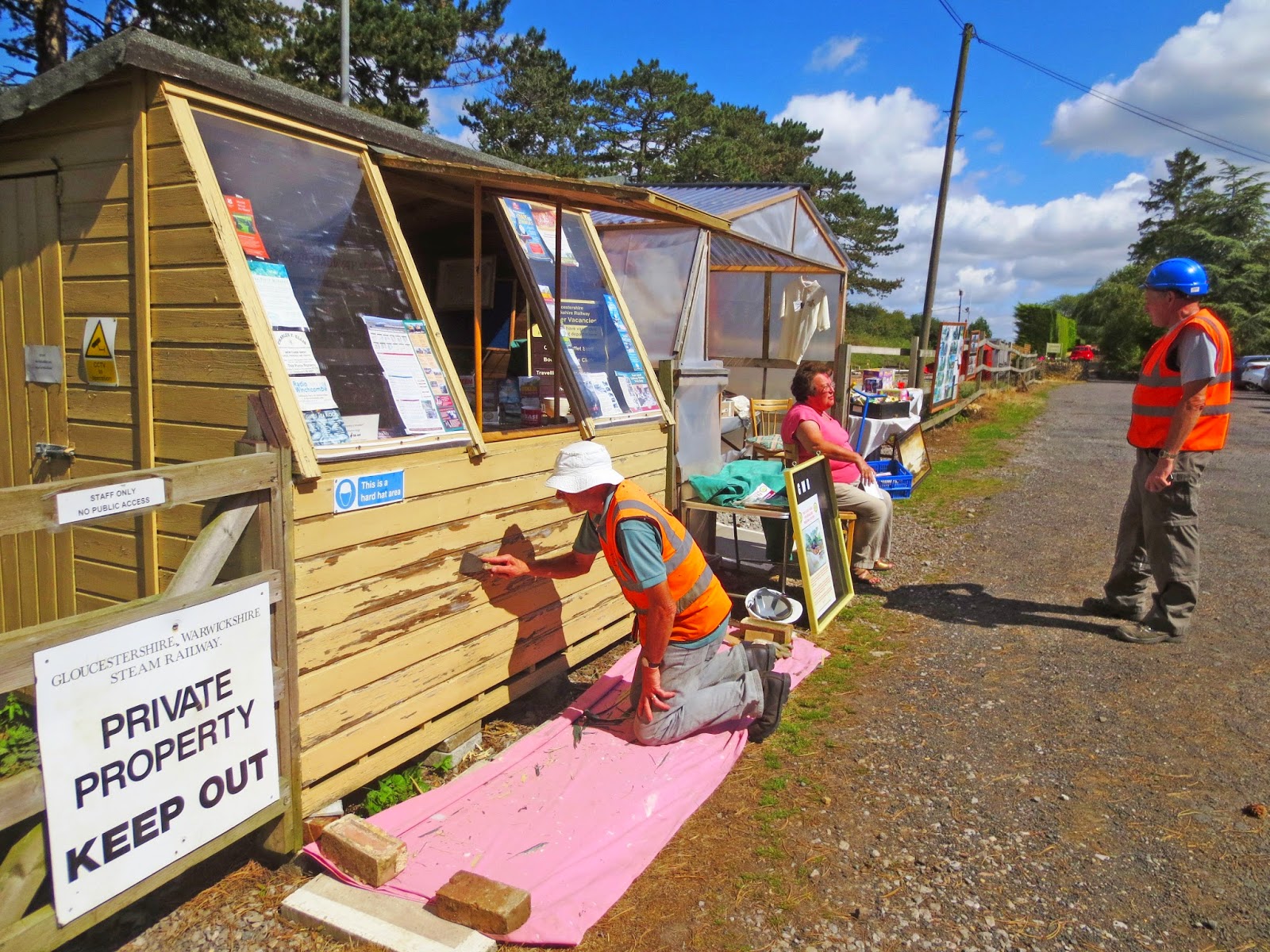 Brick cleaning of course also proceeded apace, as did weeding of the newly recovered flower bed out front. It's looking so great, a hint of what the whole station will look like - quality stuff !
In the picture above, we snapped John B giving the kiosk a makeover. Of course we had a big debate about paint, a big one ! What colour is GWR No.3 brown? It's the sort of discussion we like to have.

With the good weather bringing out the tourists, Marguerite has been doing quite well. I can recommend her home made marmalade, a jar of which now adorns my kitchen table.

She has also had an interesting new addition to her items for sale, what looks to your scribe like an original oil painting. Here is a picture of it: 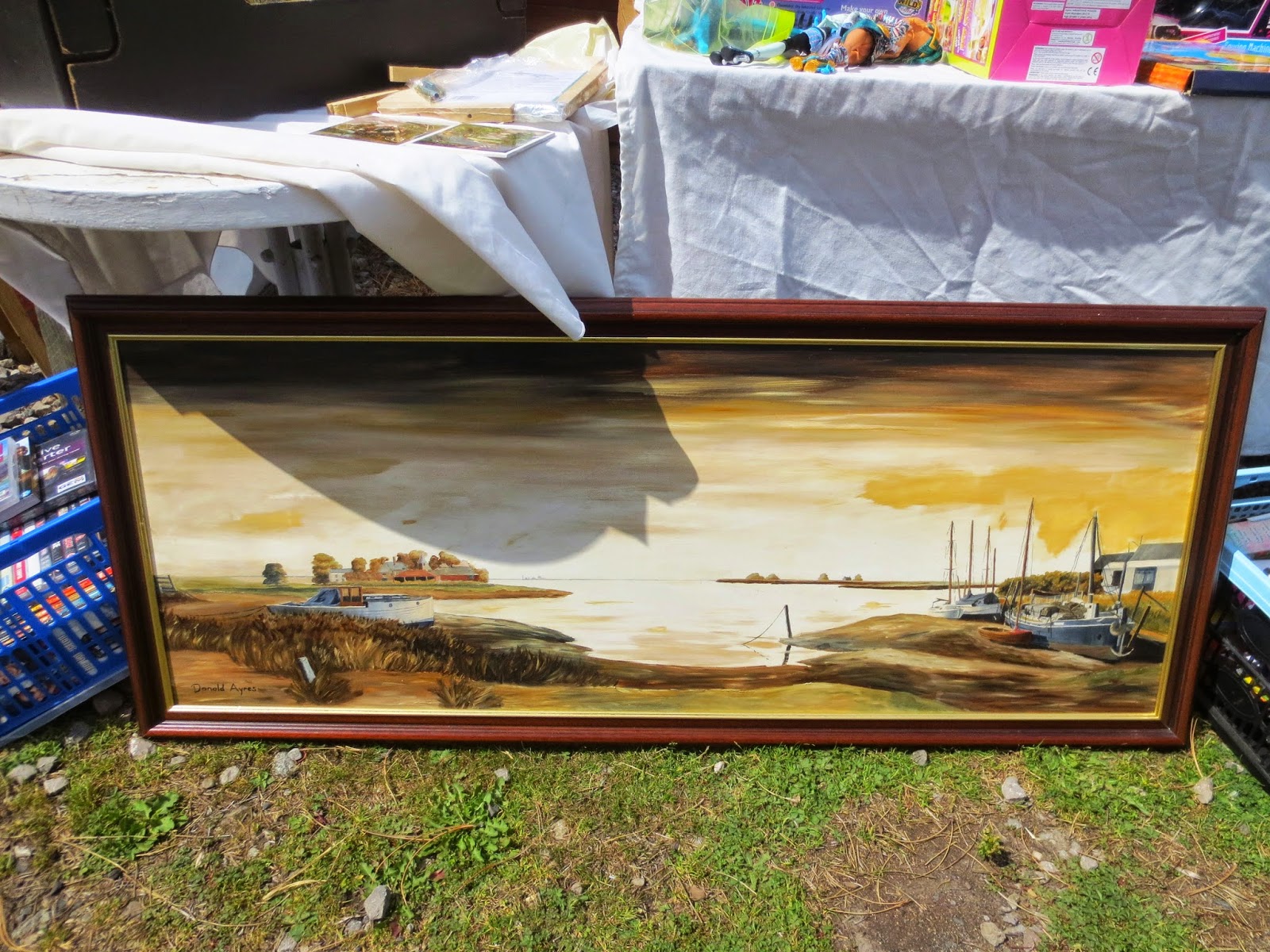 It's a coastal scene in various shades of brown, and looks absolutely spanking new, signed by the artist. If you buy it, you acquire a great painting, and Broadway station benefits.

Great work as always chaps. The web cam needs a seeing too though. its showing a still at the moment!

I'm afraid a security software upgrade caused the FTP utility which uploads the images to the website to stop working. I have temporarily removed the facility - sorry blog followers!

Hi Peter,
I don't know the price of the picture. I did ascertain that it was by Donald Ayres, who has an interesting website. (Google him)
I think it is about 4ft wide - see the corner of the crate on the left to compare.
It's best that you come up on Saturday to ask Marguerite in person, and look it over yourself.
Best regards,
Jo

If I may ask, why are you all leaving a (temporary) gap in the middle, without joists installed? Also, won't it be hard to install them later?

Noel,
The gap in the middle is for the lever frame. The shorter joists in the middle will rest on the walls at one end, and the other ends will rest on the lever frame.
The lever frame is currently in the S&T building at Winchcombe, fully restored and assembled. It can only come out of the door in pieces, not as a fully assembled unit.
These pieces will be brought to Broadway and reassembled there, bit by bit. When this happens has not yet been decided, but it shouldn't be long now that we have reached the current height, with the joists.

Thanks very much for the explanation! Now that you mention it, I did forget all about the frame (and even about the I-beam below the floor for it to sit on)! Sigh, senility must be setting in... :-)