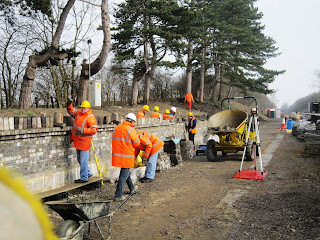 A great turn out today with 16 Volunteers on site. The bricklaying gang were out in force with all eyes on finishing the corbelling on Platform 2. Rod and Terry kept topping up the pile of bricks from the stocks at the northern end, using the trusty dumper as transport.


After today's session  there will be 2 days work left! 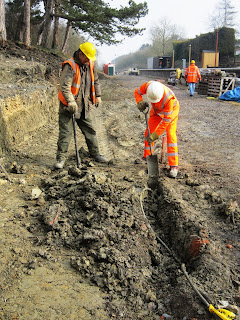 Work has started on preparing the newly formed strip for the next length of footing. First job is to extract and move the temporary power cable to one side for the trench to be dug.  Here Roger and Gord get the correct line set up, ready for a mini excavator to tease out the cable. 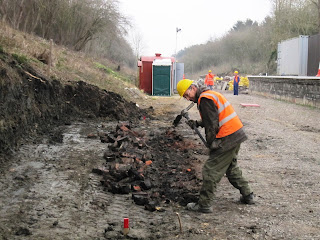 We continue to scavenge bricks when and where we can. Here Roger is taking another layer off the old foundations. 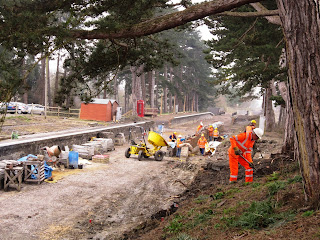 Up on the newly scraped embankment several hundred bricks were found also. This is typical of our continuing search for good bricks from wherever they can be rescued.

Here is a good shot of the southern vista.   We had several visitors today including  Jim Graham who started this all  4 years ago. He was mithering that we were going to miss the Mythe bricks. I hope he went away reassured!

Finally here is Jo's list of railway "treasure" found this week, together with a photo.

From left to right an early triangular chair (pointwork?) with a  lipped edge, marked GWR and a foundry on top. The oak key also in the picture is far too big for it, so this would have been for something quite early, eg 85lb rail. Found below the former signal box site.
An undidentified bar with a hook on it, possibly the catch from a gate or window
A shell fossil
Mounting and wheel for a signal wire running under the platform edge
Lower half of a ‘Home Brewed Ginger Beer’ bottle, by ARNOLD xxxxxx & Co
United Dairies milk bottle
Spring fitted door closer in brass, I believe this was from the waiting room door (found nearby)
Movable cast iron grate, found below the signal box site and probably from the stove that was in it.
Steam locomotive firebar (one half), found near the bridge rail fence post at the Evesham Road end of the car park site. 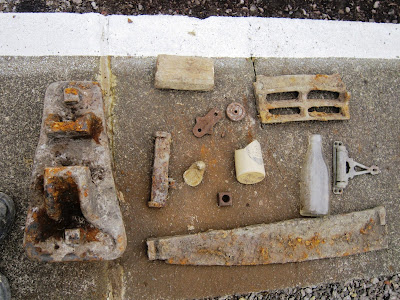 The sturdy glass bottle with narrow neck marked Cheltenham & Gloucester shown a few months ago on the blog has been identified as a soda water bottle.

If you can put Jo out of his misery as to what some of these relics are, it would be much appreciated!