A great turn out today of 19 Volunteers, particularly on a cold, grey day.  Nevertheless, even though it was too cold for brick laying, there was much to be done. 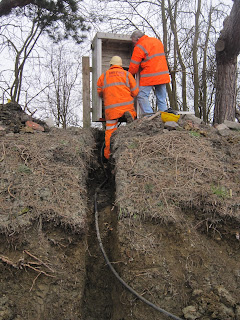 The major job for the day was the shifting of the electric supply from the track bed to the top of platform 2. Steve Long came along to do the tricky bits and, as always, these jobs can take longer than planned! Here Rod, having dug the trench helps out with locating the old consumer unit in the new box. 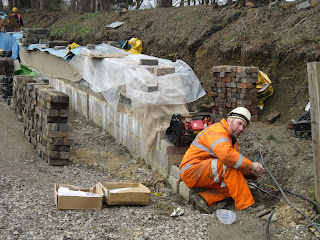 Having completed the transfer of the box it remained to do the tricky task of jointing the old cables to the new. I think Steve has done a few of these in his time!
Eventually power was back on, which was a great relief for those who had missed their cuppa for the morning! 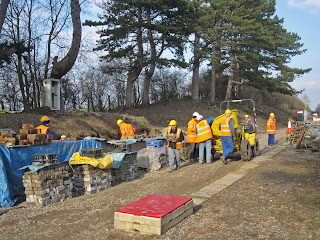 As I say, bricklaying was not on the list today, but a huge push was made on getting the right bricks lined up for the next brick laying session. I'm not sure how many volunteers we had on this task specifically, but boy did they shift some bricks!

There is a plan afoot to have a regular 3 days working each week, specifically for bricklaying. This seems to be settling in for Mondays. 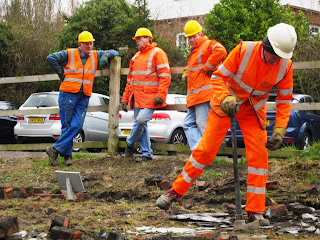 On the old station site we removed all the surplus reds and move them up north to the 4 people brick cleaning. Here Peter, Terry and Rod admire Gordon's pick technique! 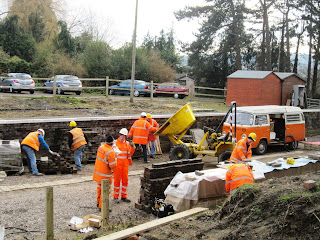 Not often that we have a VW Caravanette on site but here Steve's graces platform 1.

Thanks to everyone for all the hard work today. Also a big thank you to Fred Lea the railway artist who brought along his artists impression of the new Broadway Station. Will you get to see it? Watch this space!