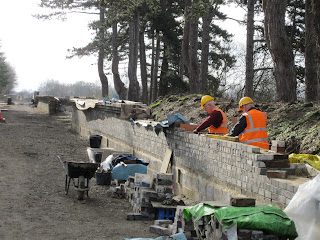 It was a great day  at Broadway - the sun shone and 10 volunteers set to at a variety of jobs. The brick laying continued on platform 2 and another 2 courses of bricks were laid on the northern end. Tony and Clive,  here in the sunshine, which had dried out the brickwork and looking southward the walls looked resplendent. 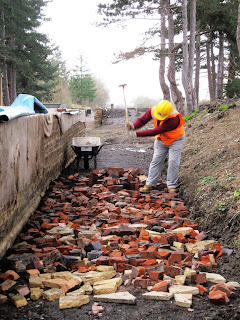 Tony also shifted and leveled a course of broken bricks behind platform 2, with Jo and Vic supplying the ammunition. It certainly is good exercise - both barrowing the bricks and swinging the sledge hammer! 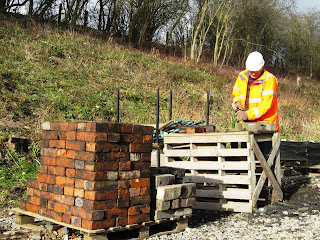 At the northern end of the site Robin and Keith kept the supply of bricks coming from the brick cleaning benches. That's quite a stack of bricks cleaned in one day. 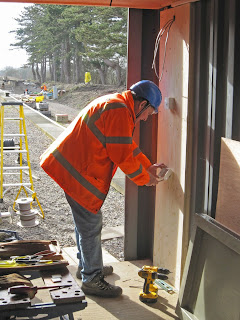 In the new container Jim and John set about installing some lighting and some power. It really is a very useful space now. 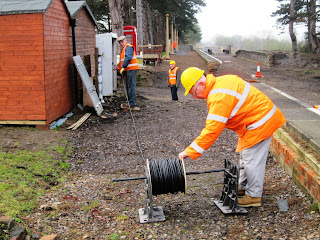 At the start of the day a new cable was put in the ducting down onto 1A. In theory we can now put lights on the lampposts! In reality we need the power to the south for future building work. 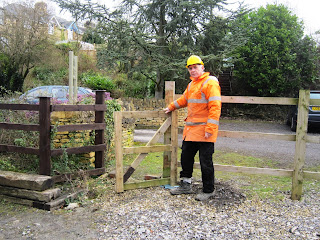 The closer proximity of the new container  means that a gate was desirable for quicker access from the car park. No sooner said than done Dave made the gate and had it on its hinges ready for use.

Thanks to John B and Vic who did there share of the jobs for the day and I felt the sunshine and good spirits sent everyone home happy.
Posted by Bill at 21:21

Superb, has there been anymore developement on the signalbox footings? Kind regards Gavin

The electrician in the new container - Jim or John? Whichever, he needs a new nickname J..."Two Drills"! That man means business!

I'm sure there are a number of watchers who would like an update on the Telephone Box, it has been very quiet on that front, a ringing in our ears would be good.

Re telephone box - we have been awaiting the delivery of a Jubilee interior but the supplier has had some manufacturing issues. I hope this will be resolved by the end of the month, otherwise we might have to change supplier.