A sunny day, not too cold, and 16 Volunteers on duty. 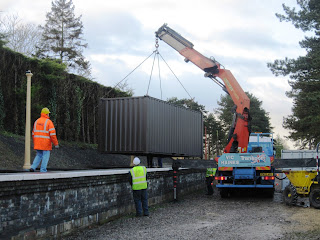 There was an early start for the "locals" John B, Mike S, and Tony B, who arrived at 0800 hours to see the Vic Haines Transport HIAB onto site. Graham Smith had organised the transport in order to move the old and new containers into their new positions on the end of Platform 1B 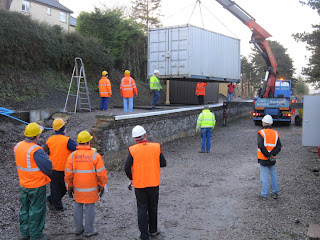 Having got the new one settled on sleepers it was a bigger task to get the old one placed beyond it. Ramps were engineered for a smooth run up into the containers. Then started the arduous task of putting the materials and equipment back, taking an inventory record in the process. High value items of tools or materials are not kept on site for security reasons, but we have still accumulated  a variety of bits and pieces over the recent months. 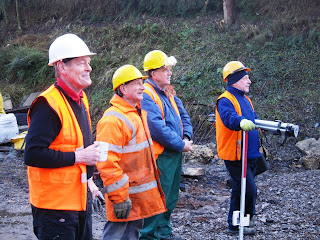 There is nothing like a crane in action (other than a big hole in the ground!) to bring work to a halt - and why not! 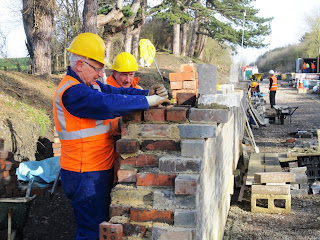 When the lorry moved on the brick laying gang were able to get their cement mixer in action and work continued on Platform 2. 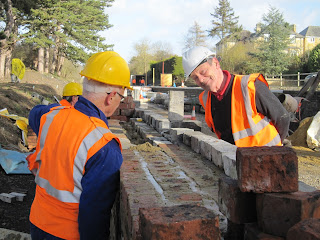 Good progress was made and the sand and cement seems to get consumed at an enormous rate! Here Paul (white HH), who keeps the bricklayers going with muck and materials, is also the QA man here, making sure that a tidy job is being done! 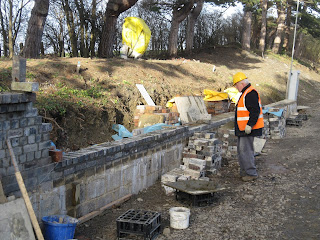 Shouldn't forget Bob Jones who is  pioneering the brick run northwards, ready for the rest to follow.

We are contemplating having a Platform 2 brick laying week in March, hopefully when the weather is consistently warmer. If you are a volunteer on the GWR, have brick laying skills, or wouldn't mind doing some labouring  then please consider helping us out. I will let you know if and when as soon as I can.


At the northern end of the site the brick cleaners were back in action. I also know something serious is happening when our carpenters, Peter and  Peter  have their chisels out working on a new piece of wood - a running-in board in production me thinks! 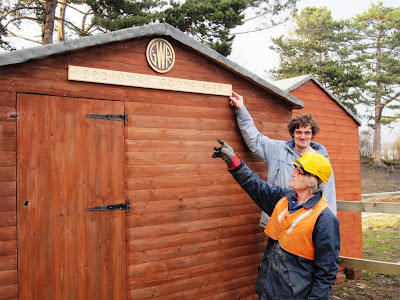 Finally 2 important events today - Chris and David  Helm returned after a much need Christmas break and brought with them a beautifully hand crafted sign for Marguerite's Shed. It really is a lovely bit of workmanship. Brilliant!

The other bit of goods news was the Chris Reynolds got the dumper back in action this afternoon. Hallelujah! Thanks to all who donated to the repair cost. As I've said many times before, I am never happier than hearing the thrumping of its engine toing and froing  with its load. It symbolizes progress in sound.
Posted by Bill at 19:59

Hi Bill, will the Worcester lads be coming back to Broadway anytime soon?

Richard,
Frustratingly there always seems to be reason they can't make it. More the college administrations doing than the lads themselves who would love to come back.