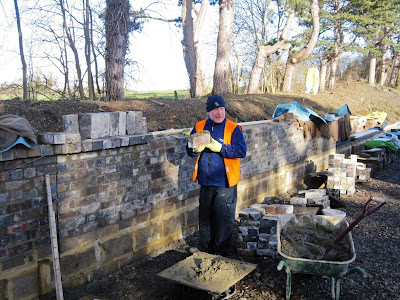 Bright and sunny for once and 10 volunteers turned out to enjoy the day. It was mild, and dry enough for Clive to get stuck into some brick laying, and the first level of corbelling is coming on a treat. 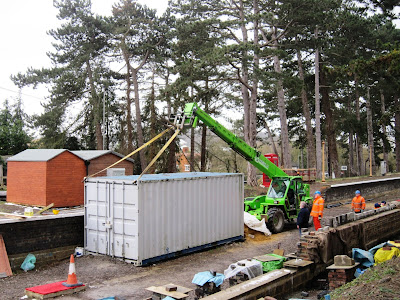 The other task planned for the day was to relocate the existing storage container and move the new one into  a position on platform 1B. The idea was to use a tele-loader to lift them into position. Having decided to move the existing container first, it was necessary to empty it out before for moving it northwards. Goodness it was an absolute Tardis - full of bits and pieces that we probably will never use! However, being something of a squirrel myself, I wouldn't be the one to chuck it out. Our best efforts at moving the container, using a pretty meaty machine, unfortunately came to nought, trying it the conventional way. In fact looking at the photo I think we were trying to defy the laws of physics! 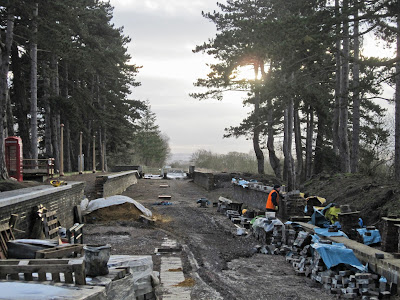 However it had to be moved by fair means or foul as it was obstructing access for larger lorries on the track-bed. I won't explain what the foul method was - but there it is gone! Clive, intent on his brick laying, doesn't notice that it's disappeared. 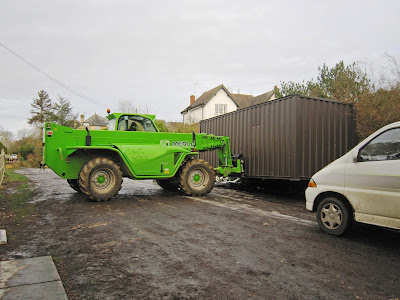 The new container would have been less of a problem being better equipped for fork lifts. Unfortunately we ran out of time with the tele-loader (on a free loan) so that will be a job for another day. My thanks to Graham Smith and his chum  on the machine who jumped through hoops to try and do what we wanted.

Thanks to all who slaved away today, it was a bit frustrating but a brisk trade was done at Chez Marguerites which  somehow made up for it!

Hi all, If you visit www.archive-images.co.uk/index.gallery.php on page 5 is a photo of Broadway I have not seen before. It appears the southern end of the platforms i.e 1A + 2A were not originally brick built.

Possibly temporary platforms whilst they waited for the embankment to settle.

Correct! Because the Southern end of the station was a made-up embankment (using the notorious blue clay that has caused the recent chicken curve, etc., problems), the original 1904 platforms had a light-load wooden trestle arrangement at the Southern end. Once the embankment had consolidated the platforms were re-built in brick.