What a thoroughly enjoyable day today. The weather was too cold for brick laying (1C on our thermometer) but there are always jobs to catch up on, and today it was infilling both Platform 1 and Platform 2. 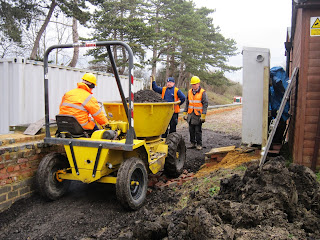 Having moved the electrical box up to platform level on Platform 1 it was then possible to fill the void left behind. In my mind I thought this might have been a couple of hours work. How wrong I was!  4 hours later and umpteen dumper loads of old ballast, the job was just about there! 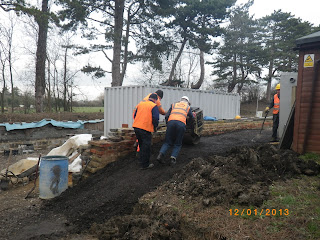 John C was in the excavator carefully scraping the ballast off beyond the Evesham Road Bridge and loading the dumper.  If we go much further we will be meeting the PWay Gang at Laverton!

Tony B was in charge of the dumper and Jo, Peter, Clive and  John S drew the short straw to rake the ballast.

The roller was slipping a good deal on the wet ballast and needed some encouragement to get up the slope. Here John B and Jo add the extra banking horse power! 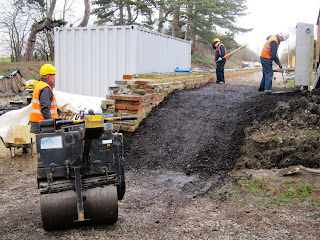 Eventually the job was was done and pretty fine it looked as well. Here Peter admires the handiwork. 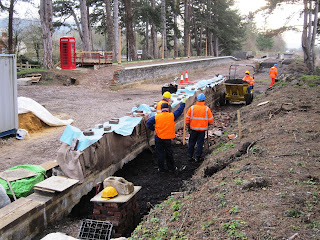 It might have been reasonable to rest on their laurels there, but Platform 2 was calling and the job continued across the track bed. Here a 25m landing strip was put in behind the wall so that brick laying was easier from behind the wall. 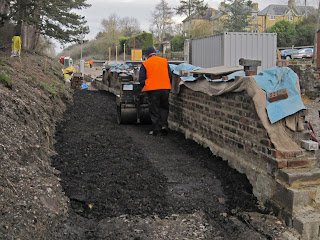 Eventually the job was completed and Clive puts the finishing touch with the roller. 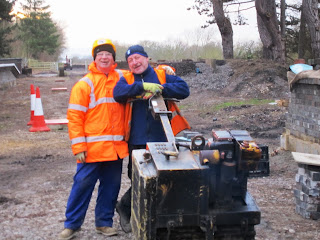 Here a nice shot of our two machine operators today(Clive and Tony). John C was still tidying up the track bed - its very difficult to get him out of the warm cab on excavator!

As I say it was a great day with 10 volunteers full of enthusiasm and good humour. The only troops missing from the photos were Robin and Mike who cleaned bricks all day!


A PS thanks to Steve Long for coming along and advising us as to how we can reconnect the electrical box on Platform 2.