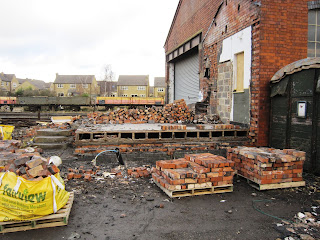 Jo was able to spend some time today on the Good Office demolition at Winchcombe. His hard work was rewarded by making  great inroads into the final layers of bricks. 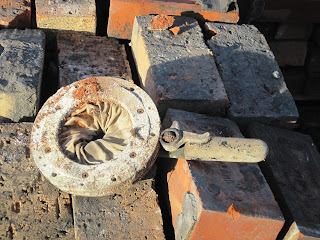 The cherry on the cake however was finding the following artifact  described by Jo :

I found a strange object stuffed down a hole – can anyone tell me what it is? It has a little lever on one side, a circular textile in the middle, and a sticker that says ‘open’.

Looks like a filter of some sort but can anyone throw any light on it? 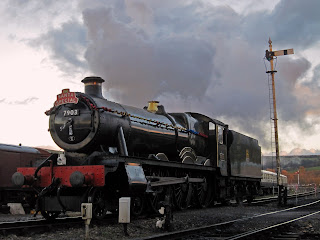 The rest of the time was spent watching and "listening" to the locos:-
Passing trains in the falling light remain ever fascinating. The 8F had a clank, and the Hall a squeak, so you knew what was coming. Both issues will be addressed with winter maintenance, I was told.

Thanks for your efforts Jo.
Posted by Bill at 21:25

Jo! I didn't even know you were there! I was busy, as I always am at this time of year, acting as one of Santa's elf helpers! And, yes, you did know from the "clank" and the "squeak" which engine was in charge. I'm maybe a bit biased but I prefereed the "squeak"!

It's an Iris valve. Used for stopping/controlling powder flow from bins etc.

i have a suggestion would it be possible to put a link to pway flickr site so i dont have to go to carrage n waggon blog from here n use theirs?

so is the iris valve a recent item or could it date from 1905?