There were lots of jobs on the go today, with much lifting, raking, rolling and every other form of physical exercise. 15 volunteers were working today and great progress was made on a wide front.

Block laying continued on Platform 2 and Bob, Clive and Paul managed to lay 40 blocks. These blocks are the last course before brick laying starts for real and the level of this surface has to be carefully monitored. There about another 60 blocks to lay and then the the first blue can be laid. What a great milestone! 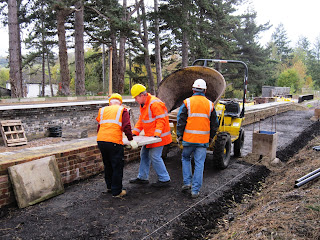 Back on Platform 2A great efforts were also going on to bring the level of the ballast behind the wall up to the required level to put the ducting in  and setting the rear slabs. We are having to use heavy 3x2 slabs which take a great deal of effort to manoeuvre  Not something to be doing at the end of a long day. 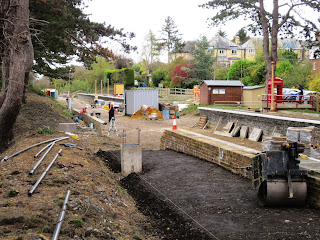 To say the result at the end of the day was pleasing would be a gross understatement. It was brilliant!

Where to next!? well the extension to Marguerite's Shed is coming along in leaps and bounds. The frame is up and the roof  nearly on. Marguerite cannot wait to get her stock moved in. 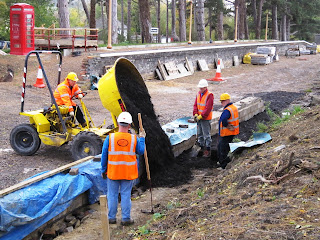 Back on Platform 2 a french drain was being put in behind the the block work. This allows the excess water to be routed across the trackbed to the centre drain. It means that the infill behind platform 2 can be started in order to get a flat surface for the brick layers to stand on.


Richard and the Fairview lorry came to our assistance yet again to retrieve the remainder of the coping slabs  from the Winchcombe Yard. We wouldn't want them wander southwards?!?.
It took two trips and a good deal of  manoeuvring to extract them and then stack them back on site. Thanks go to Richard for his hard work and the gang who fetched them. A great job.


Ron Brizlin and a team took a mini excavator down to the bridges to dig out some inspection pits for the structural engineers to come and  do a formal assessment of their condition. We will hold our breath on that one!

As I said at the beginning a lot of hard work went in today - its not always obvious but I know it lads, so thanks very much.

Getting closer to seeing Foremarke Hall at Broadway

I know I'm jumping ahead with this question but I'll ask it anyway! As far as I can see from the pictures there is a metal box at the end of platform 2 currently under construction. How will the next length be built because the metal box looks like it will be in the way.

Nigel,
We will move it up onto the embankment and extend the cables. It shows how its best to think ahead sometimes! We never dared to think we would get this far so soon.

Bill,
I'm intrigued by the amount of spent ballast you are using as part of the infill of the new platforms.
Where is this coming from and won't you run out of it if the source is the old trackbed formation ?

Hi John,
You are right that we may run out, but not for a while. The section of trackbed to the south of the bridge is badly contaminated and would have to be disposed of before laying new ballast anyway. It's ideal for our purpose.

Bill, Thanks for answering the metal box question. Another one for you. What is meant by "spent ballast" and how does ballast get contaminated? I don't really understand how stone can wear out!

Nigel,
An extract from the "Rail Engineer"
Ballast deterioration is due to stones eroding over prolonged periods and high stress, particularly under sleepers, and contamination by fine particles from both the sub base and from trains (oil, brake dust, toilet waste, and spillage of bulk materials carried). Also in our case decades of contamination from mother nature and all the people walking the track bed.
Hope this helps

In addition to being interested in your answer to Nigel's ballast question, I would like to know about the bridges mentioned in this posting - how many need to be inspected and how far south of the station do they extend? I suppose all will need a degree of remedial work. What state is the Childswickham Road bridge in?

One question I have is what's the latest with the footings for the signal box? Cheers gav

Richard/Gav,
All of the bridges need a good deal of work(=money!) spending on them. The Childswickham is the best of the bunch.

We have been advised to wait for the planning application to be approved before piling the signal box foundations. This is not as bad as it seems because the wheels are in motion, albeit at the drawing preparation stage currently. Keep the faith!