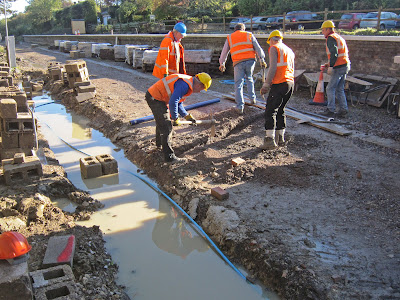 A nasty surprise awaited us on arrival today - most of the torrential rain from the previous night seemed to be resting in the "trough" where the Platform 2 footings were. 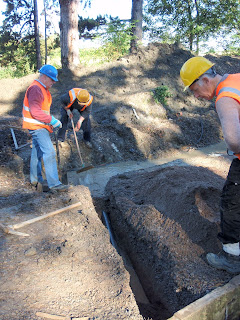 However we had an army of 12 volunteers on site and we set to at putting some extra drainage across the trackbed into the centre drain. 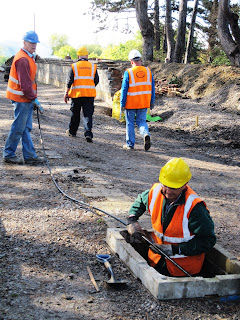 This brought into focus again the need to have the centre drain running freely and having cleared the flooding problem Roger  Johnson  and John Simms set to at rodding through  the full length of the drain, clearing out the debris from the catch pits as they went. 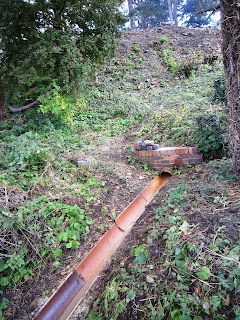 It was a time consuming job, but by the end of the day they had the drains flowing freely down into the culvert. A top class job. 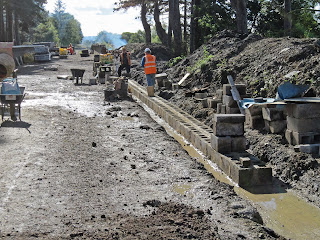 The drains were effective enough that Clive, Bob and Andy were able to set to after lunch and lay forty plus blocks on Platform 2. Here we see the results at the end of the day. Its very satisfying to deal with a problem and then get back on track!

On other fronts Vic and John B got a bonfire going and, with some hinderence from myself,  were able to burn all of the cut vegetation from the clearance of the northwest embankment by the bridge. 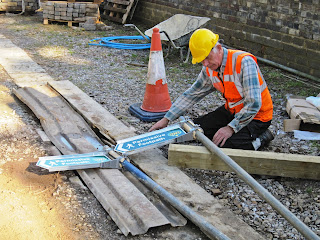 Also Dave Bowie was able to erect the permissive footpath signs identifying the footpath along the planned car park area. I am hoping that these will stand the test of the vandal who has destroyed previous attempts at marking out the footpath.

Brick cleaning continued with Robin and Mike - there is no shortage of bricks to go at!

Last but not least Jim H started the task of making some new  temporary catch-pit covers, which I hope will stand the test of time until the railway opens.
Posted by Bill at 09:15

...And we will go back in the future! (?)
Bill and blog followers just want to share these:
I have just viewed a fascinating DVD: Vol 107 of the Ultimate Arhive Steam Series B & R Video Productions (www.BandRVideos.co.uk) 60 mins of which at least 30 mins on Stratford to Cheltenham Line. Its amazing. Expresses, Locals, Prairie hauling Cheltenham Flyer, Pannier doing 60mph!?
Broadway embankments built around concrete pillars. Lamp Hut clearly now back in its original place. Landslip in new car park clearly visible in early 60s?
The future: steam trains to Stratford? See:
http://democracy.stratford.gov.uk/mgConvert2Pdf.aspx?ID=5656&T=9
Report presented to Stratford (up)on Avon DC today 8/10/2012, if link no good search Avon Rail Link and view report.See 3.2 and 6.9.2 especially. Its terms of invitation to tender search "Stratford upon Avon to Honeybourne Railway", for Project Brief and Invitation to tender. All fascinating stuff if you like that sort of thing, which I do.
Keep up the good work
Ian

Now I know what to put on my Christmas list!