Two retrieval exercises were on today. 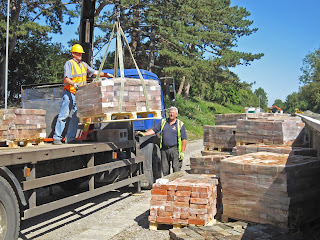 The first was to retrieve the next load of bricks from Ashchurch, courtesy of Terry and Paul once more!
Here they are being unloaded at Broadway. Paul at the crane controls and Terry "steering" the pallets. 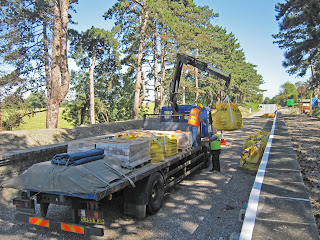 A second trip returned the bags of spoil which were placed adjacent to 1A, to be used as infill on 2A. A brilliant result. Terry will probably give me some statistics when he gets a chance. 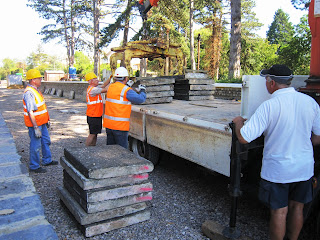 In the other direction Roger, Tony and Richard from Fairview were retrieving a consignment of coping slabs from Winchcombe, together with the one remaining lamppost. 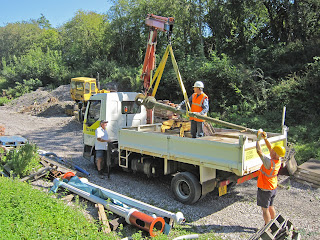 Having retrieved 16 slabs from  Winchcombe and deposited them at the northern end, Richard brought some ex Honeybourne slabs down to 2A for work to commence on slab laying next week.

The lamppost was placed with the others which will be erected on 1B shortly.

Thanks to everyone involved, including Jo, who always seems to be in the right place with the camera!
Posted by Bill at 17:26

Where is Tuesday's report? A bit slack gents!

Only kidding... What a great week. Judging by the overview of the next two month's plans provided by Bill things are really going to start looking different on site. Can't wait to get over in a couple of weeks to see with my own eyes.

Keep it up one and all!

Blimey! At this rate it will soon be eight days a week :-) I think you're all doing a brilliant job and I'm itching to get there to take a look for myself one of these days.

On a different note, does the signal box base thingy have to be in place before you can get on with platform 2, or is it part of it?

Yet another question too - has the state of the bridges between Broadway and Laverton been established as regards repairs required, cost, timescale?

Oh, and planning permission application for the station buildings of course!

You wanted to know the statistics of the brick removal, well we transported 13 pallets of bricks (about 3000 bricks in total) and 5 bags of broken bricks in two loads.

I can't thank Paul from Tecton (who is a GWSR member and shareholder) enough for donating his lorry and time to do the transportation for us.