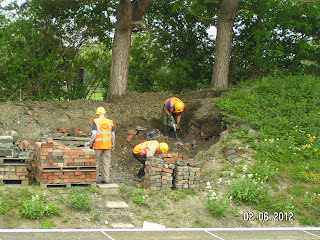 Good turn out today with 12 Volunteers in action.  Having put out a cry for help on brick cleaning and recovery, virtually all effort went on this mission. Here Dave, Andy and Vic continue the exploration/ excavation of the Platform 2 demolished waiting room. On the left, on the pallets, are some of the red bricks recovered so far, with a smattering of blues and good number of blue plinth bricks. 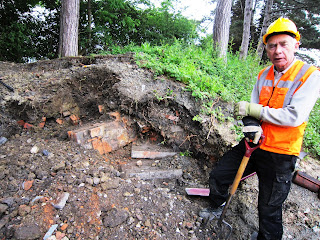 As with an archaeological dig this work is surprisingly rewarding. Here Dave is on the trail of two original platform slabs. 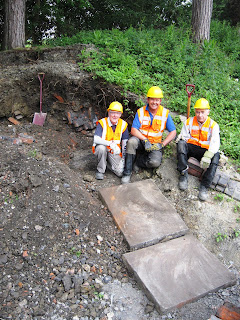 And low and behold, dogged determination produced two near perfect slabs. Don't they look pleased with themselves! It was suggested that as these were the only  whole originals that we have found so far and that they are a slightly different size to the ones we've laid on platform 1 we should take those back off - now let me think about that for a second  No. 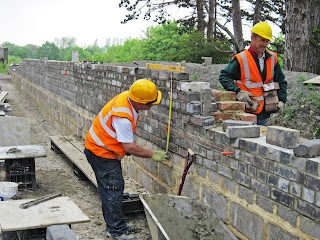 On platform 2A   Clive and Roger pressed on with brick laying and we now have half of 2A up to corbelling height. I think its time we did some infill or get Clive some steps. Seriously this photos shows the progress made very well.

At the southern end of the site Robin, Jim and Mike kept the brick cleaning going and there will be enough to keep the Wednesday Gang going. 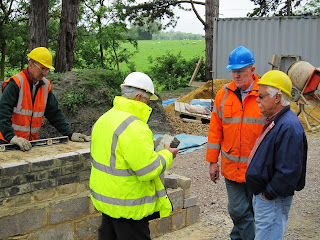 Finally how many old duffers does it take to to discuss the thickness of the bricks - at least 3, one with a blue HH one with a yellow and one with a white, plus the man who just wants his brick back.......
Posted by Bill at 20:27

Keep up the good work. It's great to see how quickly it's progressing.