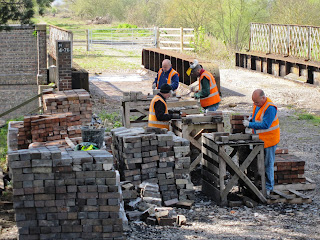 I thought today would be spent dodging the rain, but no, it stayed dry most of the day! Ten Volunteers turned up today and  a variety of jobs were successfully accomplished.

At the southern end of the site Steve, Bob, Roger and Clive launched into cleaning as many red Taunton bricks as possible, in order that brick laying could commence on Wednesday. It's a tedious task but 600+ bricks were cleaned by the end of the day. 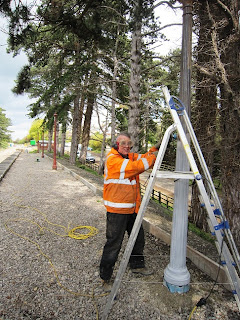 Jo drew the short straw to descale and prime  lamppost No. 4.
This too is a tough task working from the confines of a stepladder even when they're properly strapped in place. However, when the job was completed the post really looked the business. 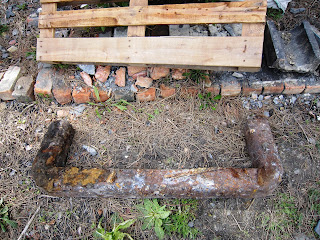 Andy P is on a mission to clear all of the bricks out of the old Waiting Room footings. His efforts today were rewarded when he unearthed the iron fireplace surround. It doesn't look too beautiful here but when Jo cleans it up it will look like new! In the meantime its been taken off site for safe keeping. 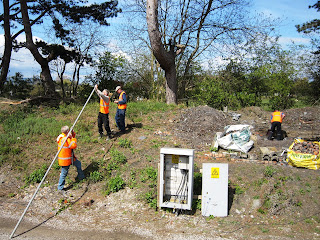 Ever conscious that that its Olympic year and we need good pole vaulters, I try and get Dave B to launch himself from the security camera pole. No words of encouragement from myself or John B would persuade him, so that was that! 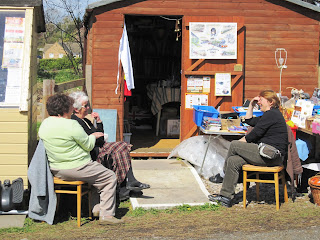 Finally last, but never least Margarite and the Shed need your custom. It is planned to have an experimental opening of the Shed on Wednesdays, thanks to an offer of help from Jo's wife Hilary. As ever, please come and support us. There is a fine range of railway books and other railwayana. Here the ladies have a sales meeting.
Posted by Bill at 20:34

What period are you modelling the station on?
Will the lamposts have those nice old big square glass boxes on top? .. Sorry, don't know what there called, Victorian has lamps I think.. Is red the final colour?

Hi when the platforms are finished, will you be laying the track? ie before the stations built, a steam engine at the platform might stir more enthusiasm from the locals n raise more funds for the build :)

The station building will be a replica of the original station, which was exactly like Toddington. It will probably be slightly longer to accommodate some extra services. The lamps on the top of posts will the square Victorian lantern shape. They will be painted in traditional GWR brown and cream colours.

We would like to lay some track and have some rolling stock there, but the old hands on the railway say they are always in the way when the final work is being carried out.
Shame!

With regards to Henley in Arden station which is in original condition and likely to be wrecked- by the planning permission to turn it into a 2 storey office block, can we at least obtain the canopy for Broadway which will presumably be wrenched off the building and trashed otherwise?

Wow, just had a look at that boarded up station building at henley in Arden.
What's happening with it? Could it be dismantled n resurrected at broadway ?...

In view that the existing station is to have a second storey extension to it, i would imagine that the five chimneys, the station canopy and possibly the corbelling would be removed to enable a second floor to be constructed, could these not be salvaged for re-use at broadway

Howard is correct. Warning, GWR history nitpicking gauge set to "high". Here we go. The correct colours for GWR buildings and station accoutrements, as any railway modeller will tell you, is light and dark stone (similar to buff and pale chocolate). Some items, such as doors, were painted dark brown whilst window frames were white. Running in boards and other notices were (in later GWR days certainly) as per Toddington and Winchcombe, namely; white letters on a white bordered black background.
After Nationalisation, BR (WR) painted ex-GWR stations in a pale cream (sometimes called daffodil yellow) with chocolate highlighting such as doors etc. Signage was also changed to chocolate and cream.
So, if Broadway was to be restored to its GWR "livery" it would be dark and light stone (like Toddington) or, if it was to be BR (WR) then chocolate and cream (like Winchcombe now is). To be really accurate, Broadway station would probably not have any lamp posts in BR (WR) days as these tended to be removed from stations once electricity replaced gas (not always but it was often the case if you study photographic records. In Edwardian times, most stations and platform fences were alos plastered with enamel signs extolling the virtues of Camp Coffee, Zebra Grate Polish or some such stuff! You could paint it bright green and cream as per BR Southern Region but that really would be taking the mick! (Looks good though - see Midsomer Norton Station). Awesome progress as ever, always a morale-booster to follow this blog!

As regards authenticity and accuracy, what baseline date do we work to? 1906? 1923? 1948? 1960?
Before we get into heated arguments about it, remember that very few paying passengers will either know or care.

Oh yes they will!

Thought I would add a note regarding Henley as there are many people asking about the station. The original Planning Application and Development (Circa 2 years ago-ish) would indeed have seen a second storey added to the building.

The building is not part of NR Estate being now Private and hence the developer does not have the same obligations as the main network to seek ‘Heritage options for disposal of materials’. The development drawings were available on the public planning website. Thankfully, though unfortunately not us, another preserved railway did have first refusal on the resultant discarded bricks from the building. The canopy is similar to Toddington in that it is part of roof and a main frame within the building. The planning application kept the front part of the canopy in place.
However things have now changed somewhat and there are many rumours as to what may or may not happen to the building. Suffice to say we are looking into it but the situation is a little delicate at the moment with quite a few politics at play.

With regards to Livery several years ago we researched and put together colour references for most of the time frames appropriate for the railway and developed a standard palate for the stations and have matched them to the colours and modern reference numbers etc., readily available. Hopefully we will do an article soon for the GWSR Website as it was complicated getting to the bottom of what was actually used or mixed up by hand. Though Im sure one or two do not look absolutely correct as the pigments used are slightly different given lead and other traditional additives are no longer used.

Just to round off the discussion on station paint colours we have consulted with the Great Western Society at Didcot on on paint colours, fonts and signage, cross check with shades being used by the GWSR Building Department,and we are happy that what we are using the correct colours for a GWR Station of the 1920-30s era.

Thanks for the informative reply regarding Arden. Would be a pity to see it demolished n destroyed.