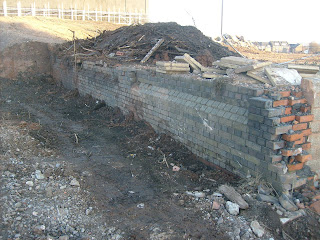 This is a tale of  a team of volunteers working themselves to a standstill to retrieve a cache of red and blue bricks from the old railway yard at Taunton. From a cost and logistics point of view it all had to be done in a day. Did they do it?

This opportunity to reclaim these bricks was originally brought to our attention by Garry Checksfield who is the Assistant Schemes Delivery Manager, Atkins H&T, Glastonbury Depot, contracted to Project Taunton. Garry is a keen heritage railway enthusiast and has been following our progress at Broadway with interest. Having ok'd the excercise with the Project Taunton Management Team, the 28th March  was the chosen as D day.


Here is John Crawford's report on the day:-

The team of 9 BAG members and Pete the Driver from Winchcombe set off at 7.00am and were joined by new member Jim who arrived in style by TRAIN from his home in Milton Keynes and everyone was there to tackle the job of demolishing the foundation wall of the old goods shed at Taunton Station and getting the bricks semi cleaned and stacked on pallets complete with cling wrap to make it easy for loading. 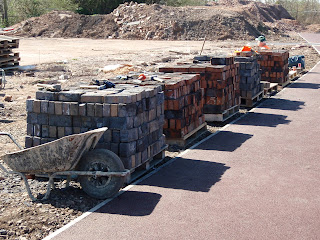 Some 3500 bricks were salvaged and a further 200 were stacked on the Winchcombe wagon and brought back with us.  We even had a few plinth headers stacked under the seats in the mini bus!!
Needless to say with the early start and the warm weather, the team were flagging by 3.00pm but they fought on until 5.45 when the aroma from the nearby fish and chip shop reached their noses, and that signalled an end to the task.
The Tired Taunton Team arrived back at Broadway at 8.00pm absolutly shattered but high with pride at what had been achieved.
The bricks will be collected tomorrow (Thursday) and should be back at Broadway mid afternoon, Steve and John C are going back to Taunton to supervise the loading and to remove a section of security fence to allow the lorry access to the pallets. 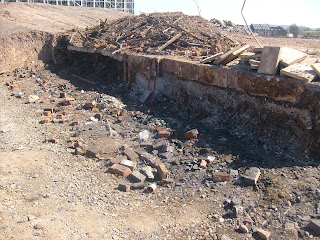 There is the job completed. A fantastic effort, organised with military precision by John Crawford. A special thank you to Pete and his colleague from the GWR Building Department at Winchcombe who brought the pallets and tools down, slaved all day, and took the "special" bricks back in the evening. Thanks too for all the photos - they will end up on Flickr with a link from the blog.

Finally a picture that says it all Steve and Pete, worn out, but happy!
Posted by Bill at 06:12