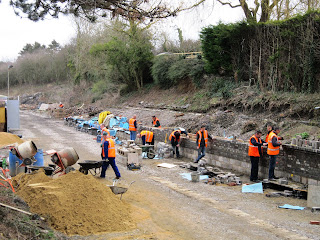 It was an action packed day today with a record number of Volunteers(22) in attendance, all working flat out on a variety of  tasks.

The Worcester College lads(7) have been putting us to shame with their rate of bricklaying, and so a team of Volunteers set to at keeping pace with them. I think we can declare a draw! Platform 1B is now 50% complete up to corbelling, another 2 months will see it finished. I should point out that this is not a speed competition, more a pride in their work contest and I believe  that everyone leaves with a sense of real achievement. 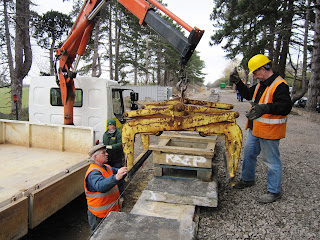 At the other end of the platform work started at laying the coping slabs on 1A. This was achieved with the help of ever enthusiastic Richard from Fairview Trading who is able to lay them within a thickness of a cigarette paper. Ten slabs were laid and we will continue this over the coming weeks until we are done. I would just like tho thank all those supporters who have sponsored  a slab  - we have 18 left to finish the job - any takers? - if so a form can be found on the www.broadwaystation.co.uk website.


In the car park a large team continued with the slashing and burning. This a real hard graft job and  only dogged determination keeps  you going for a full day. But what a treat it looks now. If you haven't called in by for some time, you will not recognise the place. Dot was back in action on stump removal. Here she is doing the task she was built for. Brilliant Video

Finally the brick cleaners were out in force - I hardly had the heart to say we are going collect another 4000 from Taunton!

Welcome back to Ron Brizlin seen as bank man in the video. Also welcome back to Andy Cavell who started the Broadway Area Group originally.
Posted by Bill at 20:41

Bill the video link of Dott doing her work take you back to the Blogger site and not a vid.

Exciting news about the Tauton bricks

Thanks for that - sorted I think!

How many coaches will all of platform 1 be able to take when the current work is completed?

Do you have enough bricks to finish platform 1b at the moment?

The current platform (including 1B) will take an 8 coach train. We now have enough bricks for 1B.
Bill