Yes, it's Monday, we know. But the CRC2 gang, a subsection after all of the Broadway gang, moved north from Cheltenham for the rest of the day, after casting another step at CRC2, and finishing off the drain behind the wall. So you get an extra Broadway special. 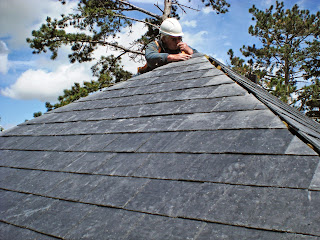 There's something very satisfying about slating the roof, and we suspect this is what drove the gang to drive north and carry on. After tea, of course, and some mini Swiss rolls.You can get quite absorbed in the slating, and if you are not careful, you can slate yourself right into a corner. Can you still get down from there, John?

This view shows the southern face of the roof completed, leaving only the back to do now. John has a mouthful of nails; now is not the time to ask him a favour. 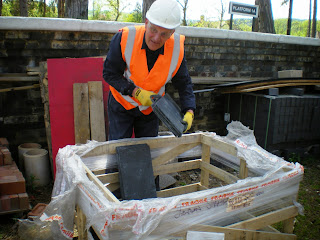 Downstairs, Keith got the job of Manager in Charge of Supplies. The beautiful slates are tightly packed in crates, and have to be teased out, put in a wheelbarrow and taken up to the roof in the hoist. 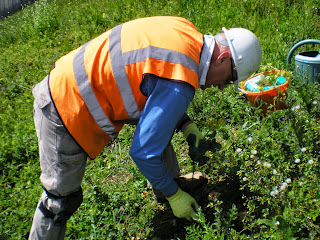 Elsewhere on the site, we find Brian with a sack full of cowslips that he brought from home. These he planted on the Malvern side of the cutting. Ideally, we would like to return the sides to their 1960 condition, ie a meadow with flowers. This will need a lot of hard work rooting out the brambles and self seeded tree stumps, but regular strimming should see the meadow return. 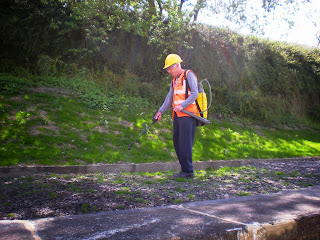 Another of our regular gardeners is Vic. He has done exceedingly well with the strip with the Cotswold stone wall, and here we see him weedkilling 1c so that it does not get overgrown before we are ready to put the top level of tarmac on.
Behind Vic is the grass that was sown there a few weeks back to secure the bank, and drive out the weeds that will inevitably rise up here, unless you get the grass in first. It's looking good though. 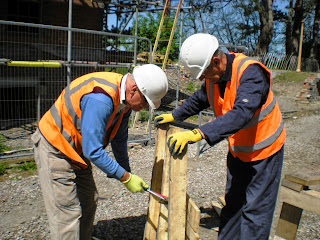 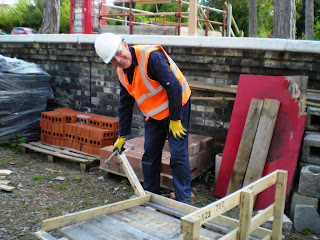 In these two pictures we see Brian and Keith breaking up the crates in which the slates were delivered.

Some of the fencing material was also moved back a bit, with the whole area being tidied ready for our open evening. It's on Friday 22nd May. Will you be there? It's your chance to see the works from ground level, have a drink and a snack and chat to us. We'd love to hear from you, especially if you have some memories or souvenirs of the station as it was.
Anyone know the name of the last stationmaster for example? 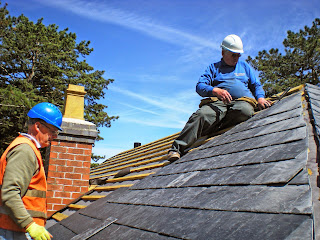 Having finished the southern face of the roof, the gang moved round to the rear. We do admire the colour of the slates, and the regularity with which they are laid. A brilliant job.

Once this face is finished, the ridge tiles can be placed. We still need to source these, not all have the correct angle, and ours have a special roll on top as well.

The chimney that you can see also needs its flashing to be added.

Peter Q mentioned that next time, he would be starting on the wall paneling in the interior.

Vic must have a good aim. I imagine it was not windy. The slates look great -how many did you break (I mean, rather than cut)?

Obviously not as windy as Cornwall, we favour clipping instead of nailing our slates to stop the wind lifting and breaking them.

It was very windy, kept the nozzle low to stop the spread going to far.

I passed through Goring & Streatley today. The debis pile from the demolished station building includes several windows and a couple of GWR doors - plus lots of the 'specialist' black bricks you have in the past appealed for!

Have you got a replacement Mag drill yet?

Please continue this great work and I look forward to more of your awesome blog posts.