Wartime in the Cotswolds - BAG was there

The Broadway area group set up a stand at Toddington during this famous festival, and your blogger and his wife manned it on the Sunday. The weather was kind, even warm on the Sunday afternoon, and there was plenty of opportunity to mooch around and hunt for some interesting snapshots. It was really amazing how many people managed 1940s dress, all very authentic and with plenty of atmosphere. Here are some impressions of the day: 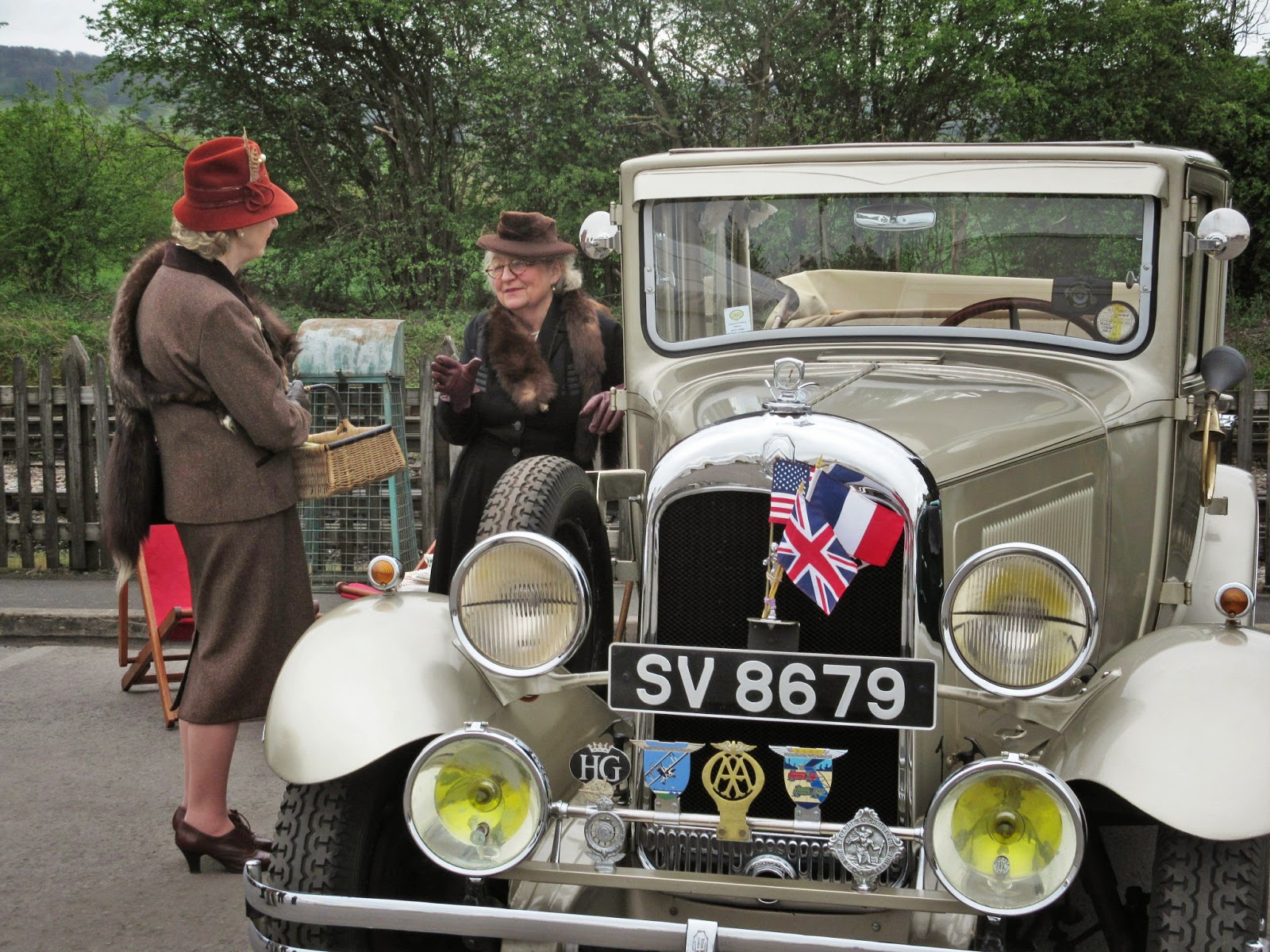 A superb Citroen, with an open rear and accompanied by a picnic table and chairs. Sheer luxury! 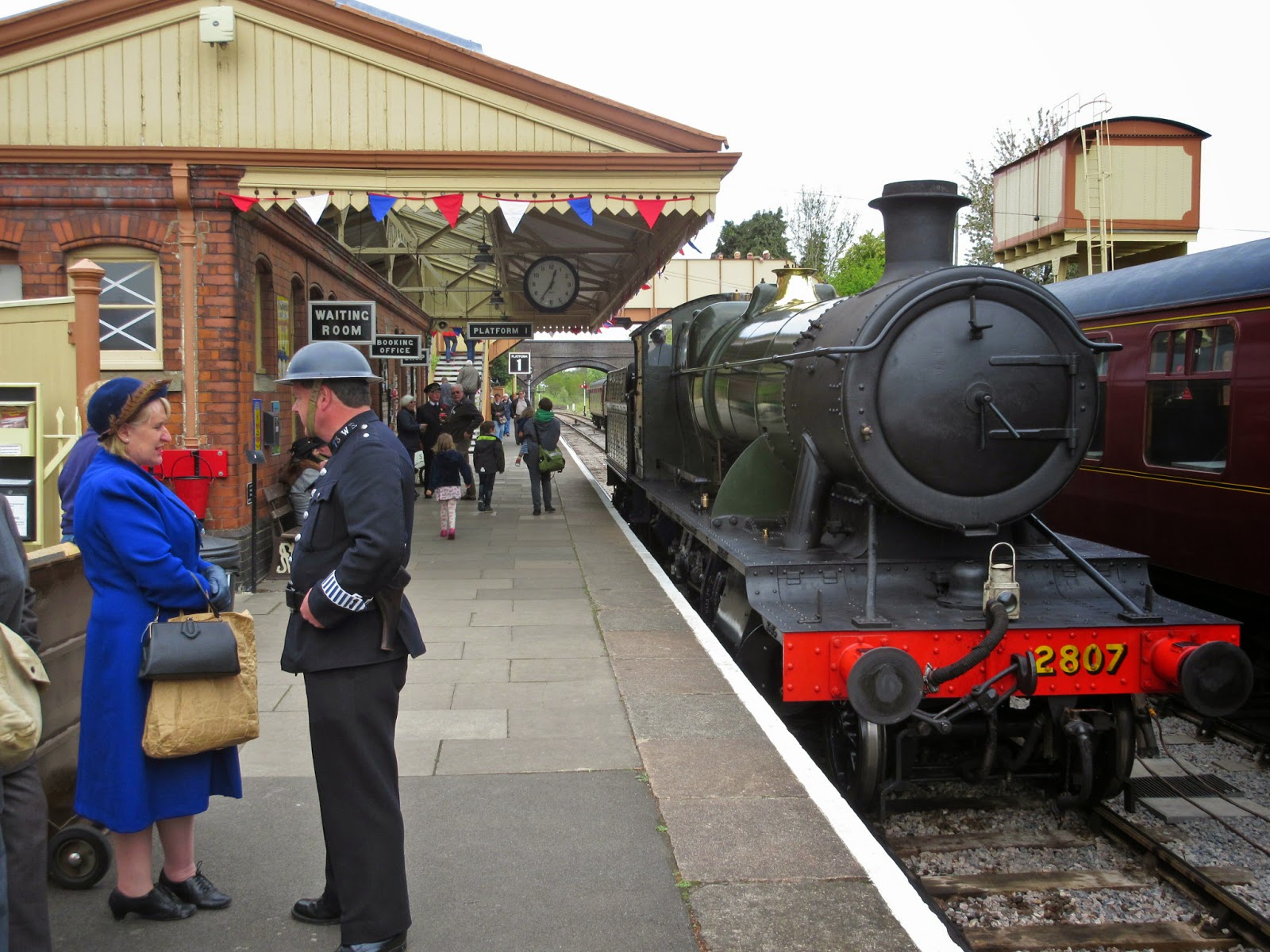 2807 glides through the station as 1940 passengers exchange a few last words. 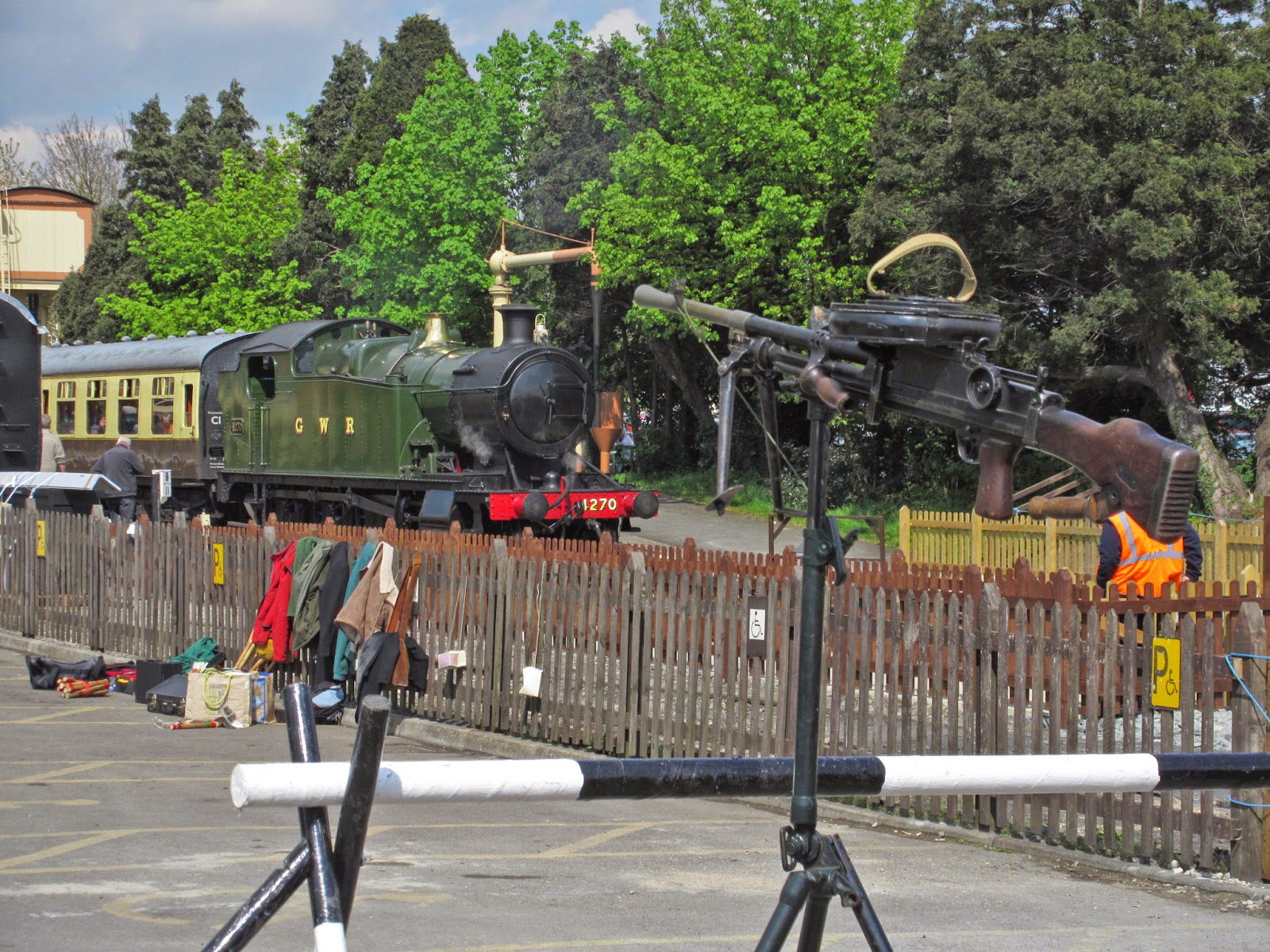 A Lewis gun overlooks 4270, about to leave with a train for the south. 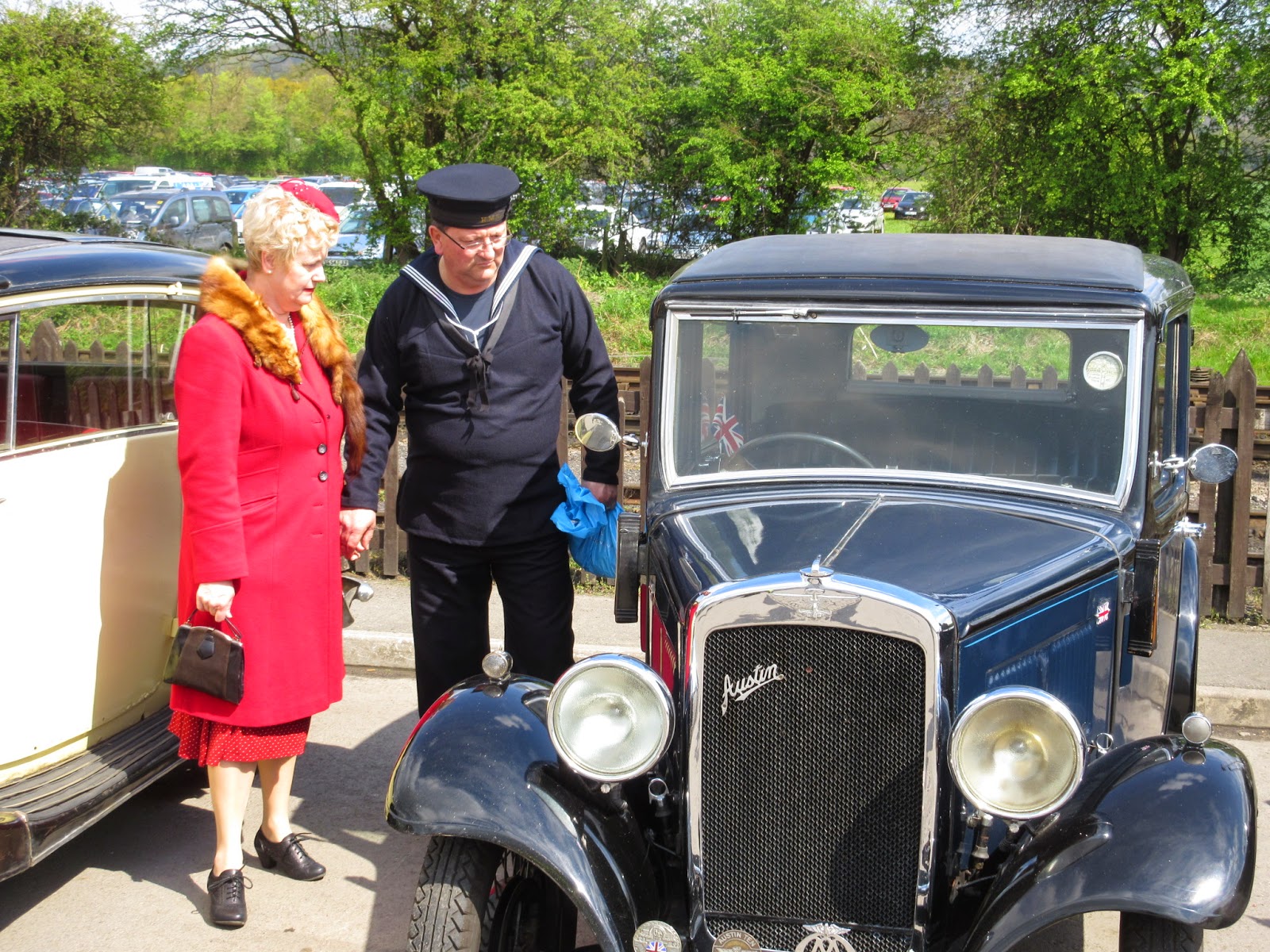 This sailor is contemplating a new car - the end of the war must be close. Bring the wife along, in case she doesn't like the colour though.

Then a sudden roar - everyone ran outside to look up: 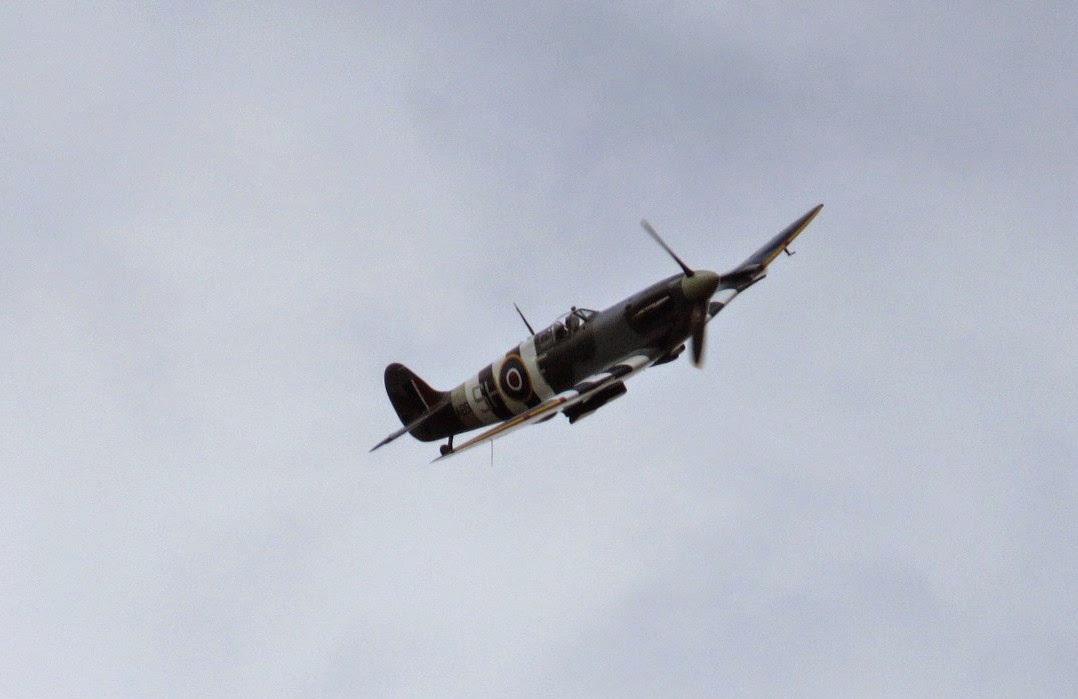 The sound of the 12 cylinder Merlin engine sent shivers down your spine. 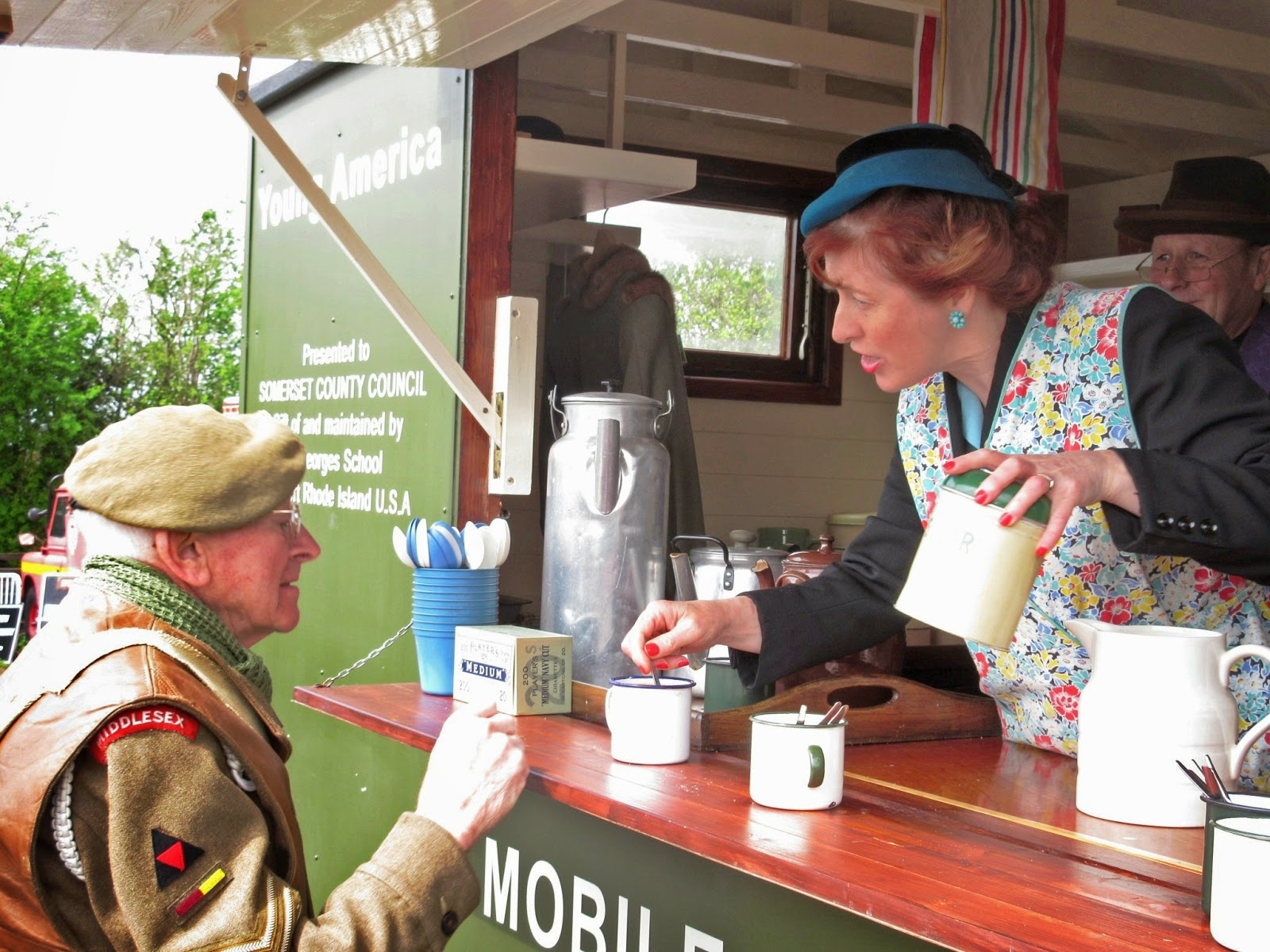 Better get myself a nice calming cup of tea then. How many pence did you say that was? May I see your ration card for the sugar? 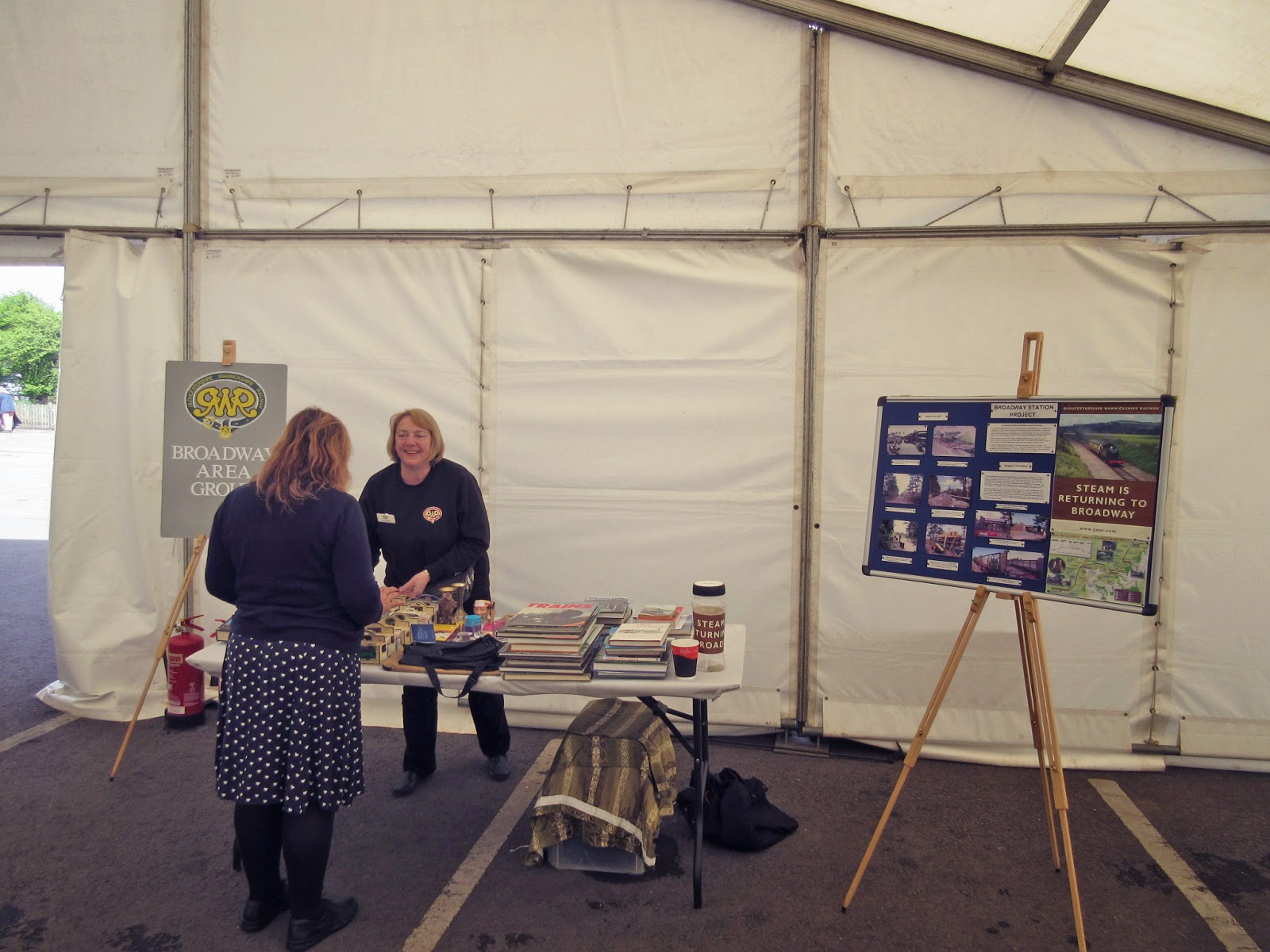 A snapshot of the BAG stand. We spread the good word about rebuilding Broadway station, recruited a 'Friend of Broadway station' and sold a few books - mostly to ourselves !
We also met some interesting people - a lady booking clerk, who used to work at Winchcombe, Toddington and - Broadway. She lived in a caravan at Childswickham, and remembered Tilley lamps used to light the station. A Mr. Breeze was the stationmaster at Toddington, sometime before 1953.

We were pleased to chat to Chris Smith from the loco dept. He was a former BR fireman who used to work with Brian Parsons at Worcester. He knew John Diston, who took the famous photograph of The Cornishman heading south through Broadway, with the pigeon baskets on the left. Chris explained that he often helped release these pigeons, and that the baskets in the picture were empty, and being sent back to Birmingham. 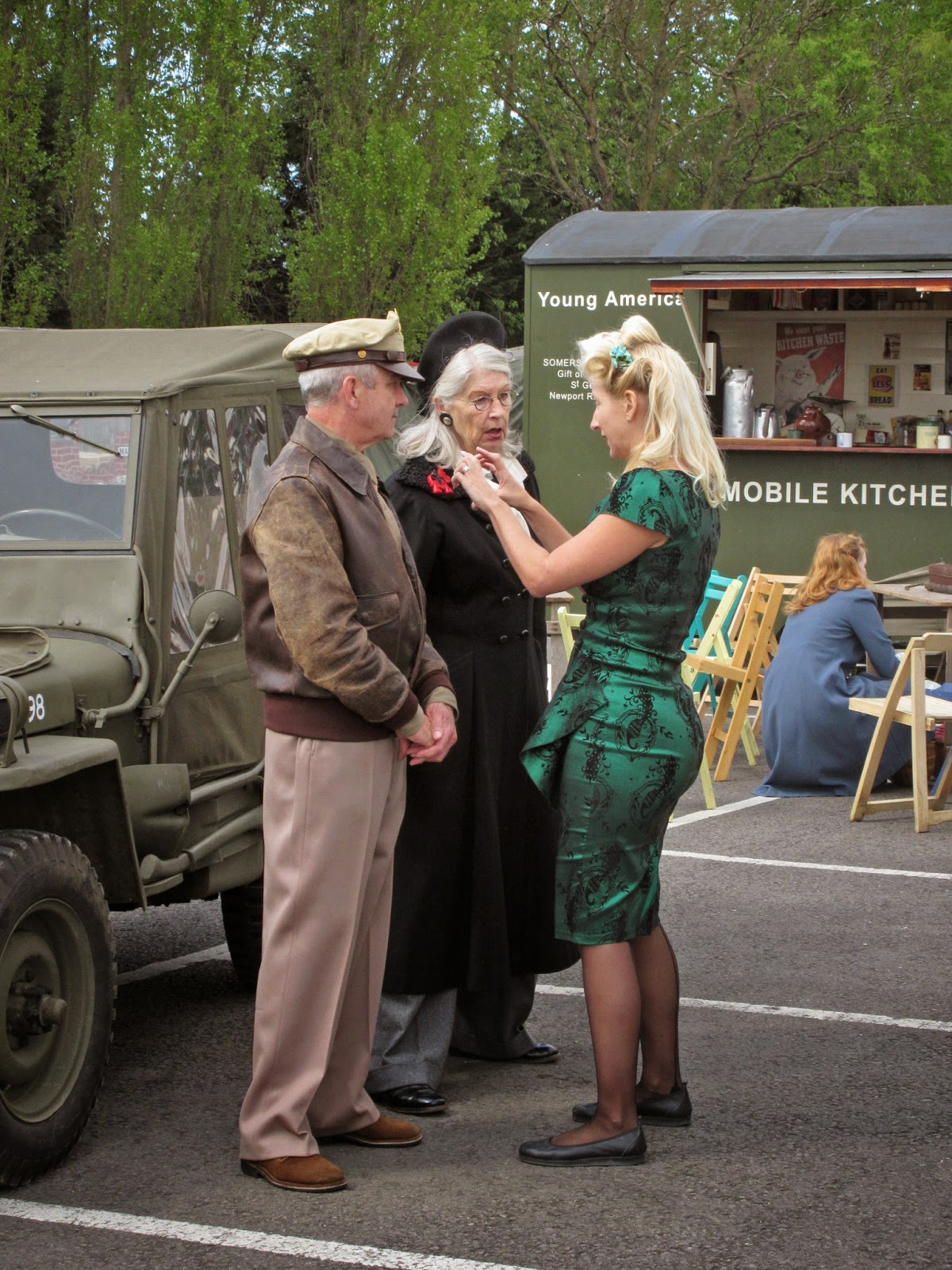 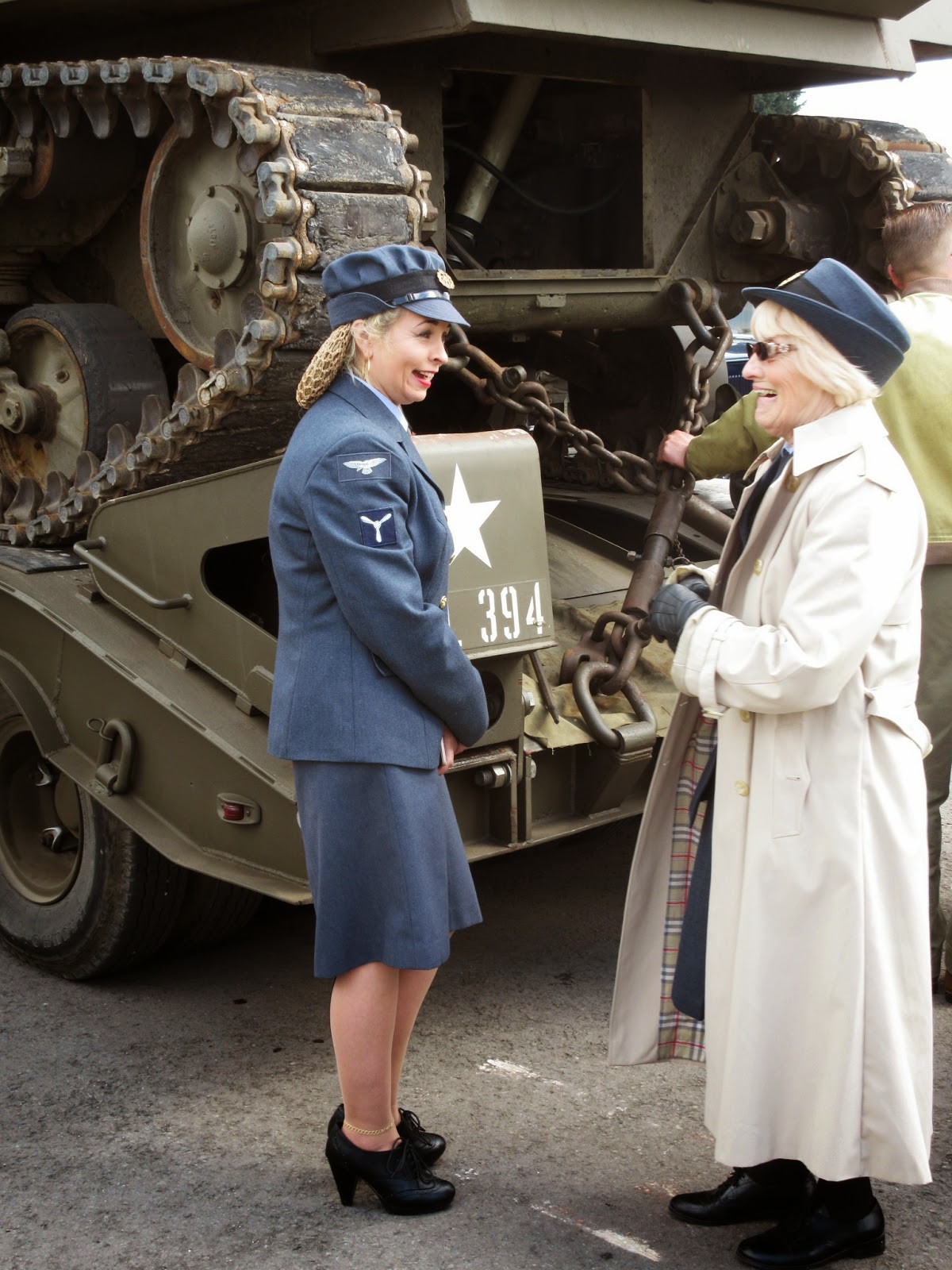 The uniforms and 1940s clothing were most impressive.
'Is that your tank out there, Lt Gruber?' ' Yes, I have just given it a little polish' 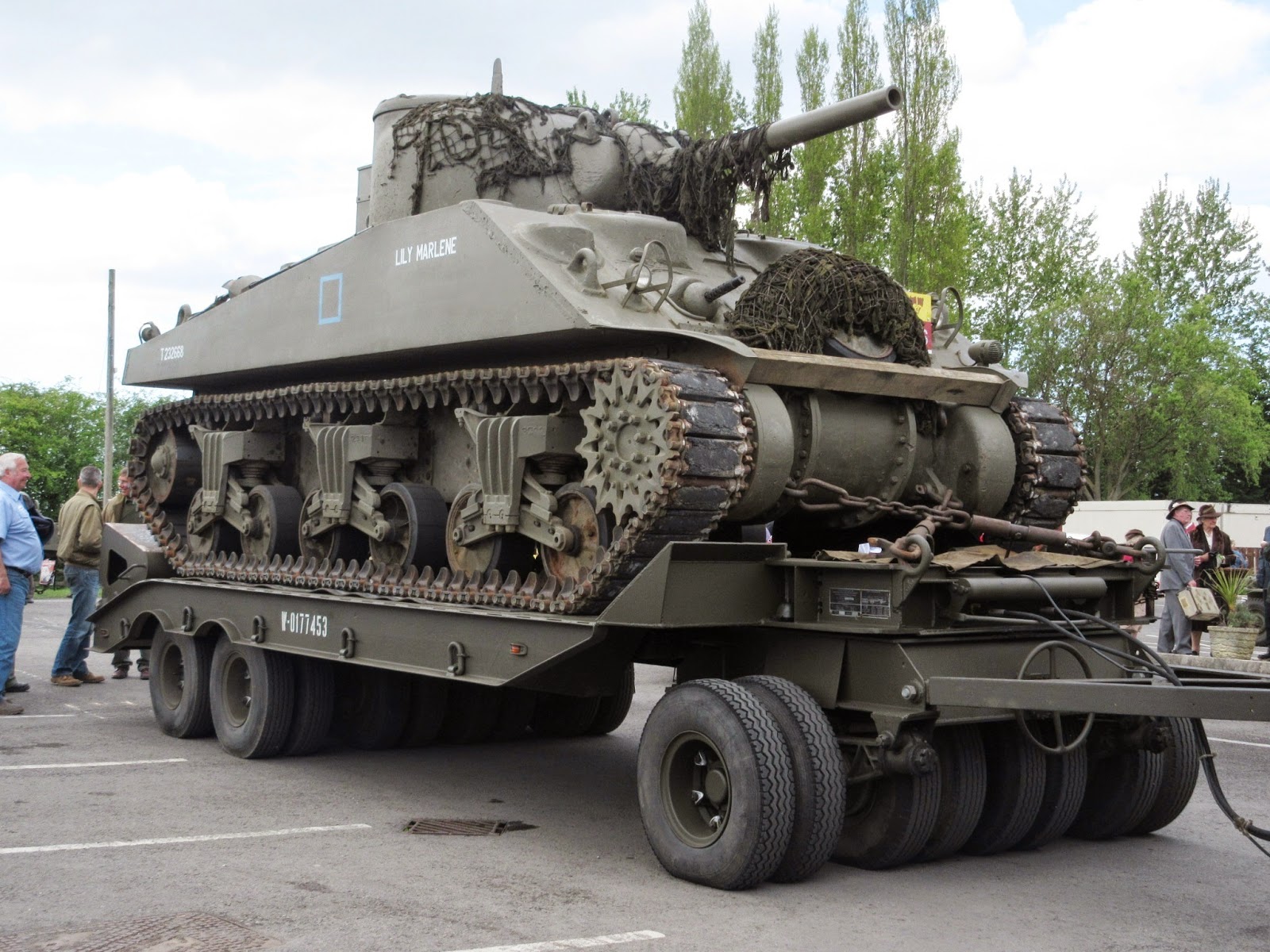 ...but most impressive for your blogger was this M4 Sherman tank. How do people manage to get hold of these? We heard that it was a former target in a firing range, but you couldn't tell that at first sight, except that the sides were remarkably smooth - fillered and rubbed down, it seems, but a great effort! This tank was equipped with a radial aero engine, and if you want to know what that sounds like, you can watch it climb on to its tank transporter here:
https://youtu.be/DaYPn9P-9gE

At the end of the day, this convoy of tank and heavy US Army lorries crawled out of Toddington yard. It was an impressive sight, and the sound of the aero engine not quickly forgotten. 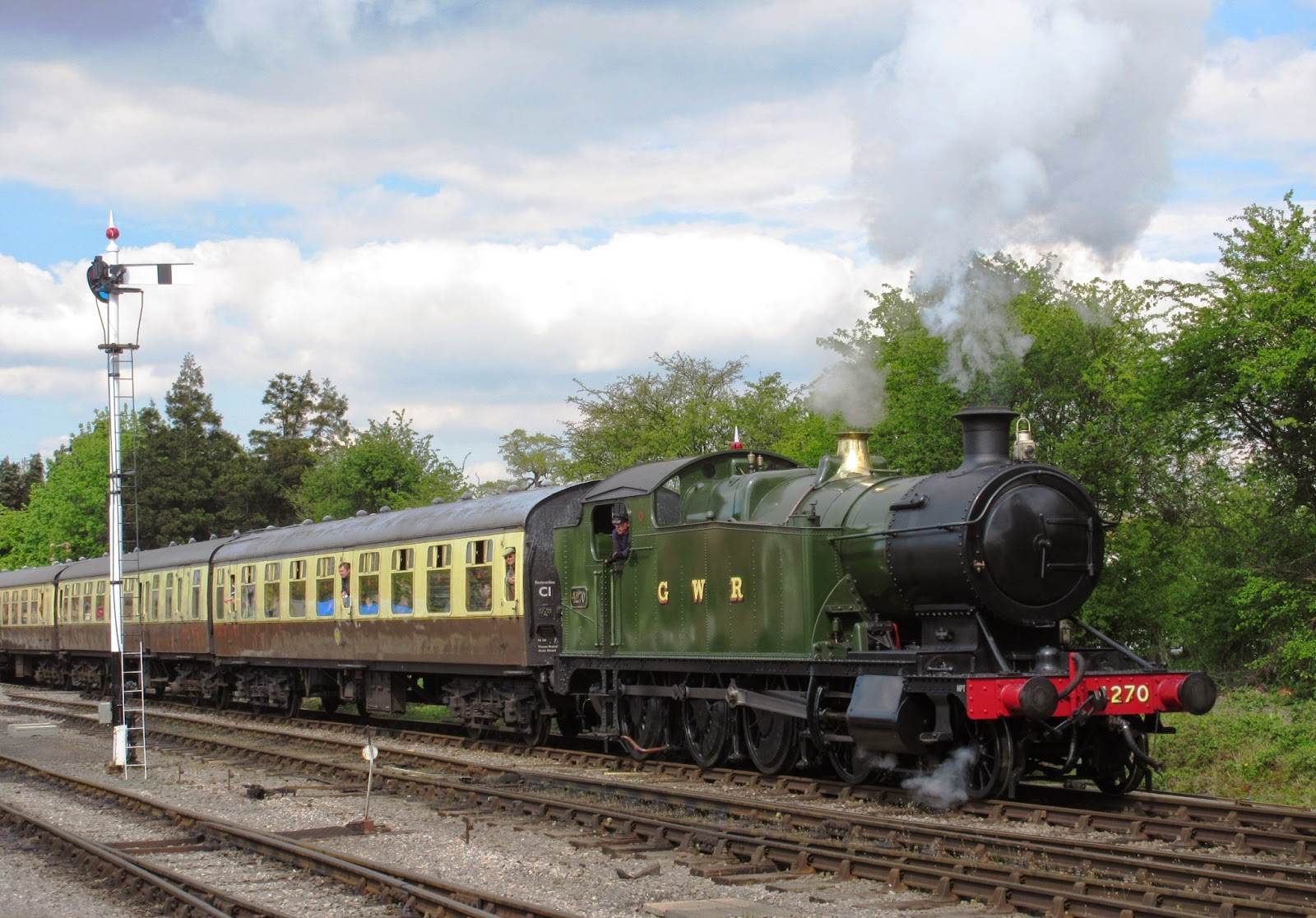 We watched 4270 leave one last time, and headed home. A great day, well organised and fun. Well done all!

Looks like it was a great weekend and the weather seemed to behave as well. I'm very disappointed that I wasn't able to attend so the blog and photos are very good to see. The Spitfire is very evocative and at least I did manage to see the one that visited the GWSR this afternoon as it flew overhead on its way over our town heading back to RAF Coningsby. It's Spitfire Vb No AB910 fresh from a 2.5 year overhaul and in the colours of SH-F, flt lt Tony Cooper's aircraft of No 64 Sqn on D-Day. This Spitfire was built at Castle Bromwich in 1941 and is famous for being the Spitfire which gave a frightened WAAF ground crew a quick flight around the airfield as the pilot took off before she could let go of the tailplane!

I wish we could borrow a rake of GWR coaches from Didcot or SVR to ru on our line.

Mk1's are OK but a bit boring.

Thanks Jo for your report and pictures. Wish I'd caught sight of that Spit but it didn't fly over Broadway!
A word of thanks, too, to John Blofield, who not only arranged our being at this event but, also, single-handed transported all the the items you can see in the picture but also set-up and manned the stall during Saturday. Well done, John!
Jim